That we still have a long distance to go before reaching the metro station is not what I want to hear on a day when I’m trying to cram all the sights on my Mexico City bucket list into a 14-hour period.

I’ve come from the floating gardens of Xochimilco in the pure south of the city and am now making my way to Teotihuacán, an ancient city famed for its pyramids that sits 55 miles northwest through the urban sprawl.

My desire for this one free day at the start of a busy business trip is to be amongst the people. I’ve seen countless times in my new life as a business traveler how easy it is to seal yourself off in a hegemonic bubble, drifting from first class flights to a private taxi to your luxury hotel room and bar. It’s difficult to feel you are even part of the place you are visiting when traveling this way, and so today I opt for a ride in a collectiva, or shared taxi.

Between the vast distance and traffic, it becomes evident that this plan is not going to work if I am to make it to the pyramids at a reasonable hour, so I get out when we pass a McDonald’s, connect to the Wifi and hail an Uber to take me directly to Terminal del Norte where I’ll still need to take a bus to get to my final destination. 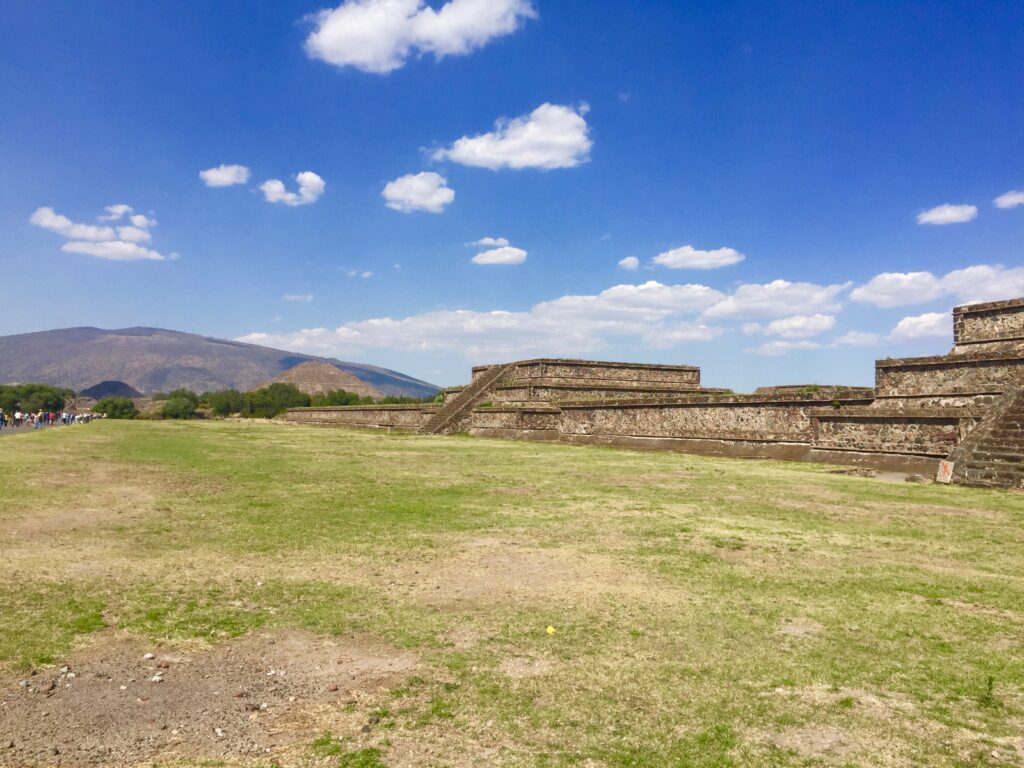 “When you go to the pyramids, don’t look for anything. Just observe and note how you feel.”

My Uber driver Jorge Luis begins our conversation by explaining that he senses a special energy in me and that the pyramids of Teotihuacán are drawing me to them for a reason.

“Read about them when you get home and one day you’ll know why they drew you there.”

In the 45-minutes it takes us to reach the bus station our conversation weaves and winds, following almost as many roads as the car does to avoid the throws of Mexico City’s infamous traffic. Jorge Luis first speaks to me of love, sharing the fatherly advice he gave his daughter who recently married and moved to Europe.

“You have to understand when it’s love or physical attraction. These are different. Both have their place, but you musn’t mistake one for the other – amor es compartir la vida.”

In the days of my visit to Mexico the United States is making headlines with derogatory comments about the country, so there’s no way to avoid the topic of politics in any earnest conversation. Jorge Luis isn’t upset by the comments the administration has made because he feels they are true if directed toward the government  — he knows all too well that Mexico robs its people, corruption its original sin.

“Mexico can’t point its fingers at others until it fixes it’s own problems which are – for the past 70 years the government has robbed the people.” 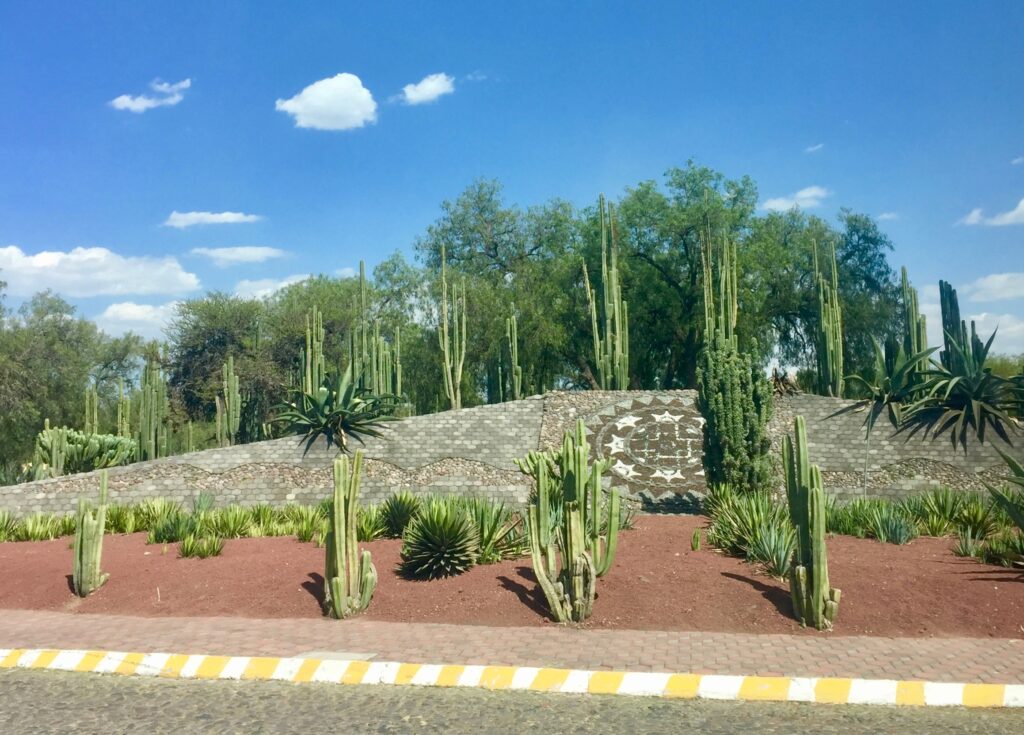 At Terminal del Norte I buy a direct bus ticket to Teotihuacán and am eager to begin exploring the vast archeological complex. More patience is required however, as the bus ride parallels my experience in the shared taxi; instead of a straight shot we make multiple stops to let vendors on who sell water, food and souvenirs.

One such vendor is selling aloe vera gel. We stay on the side of the road for a full seven minutes while he delivers a dramatic and booming speech about the powers of this gel and all the benefits it provides. Not a single person on the bus falls for his offer. If only aloe vera contained a solution for all the problems the world is currently facing we surely would have bought his entire supply.

A few minutes later we pull over again, this time to let a musician on. He remains onboard with us the rest of the journey, playing his guitar and singing The Sound of Silence in Spanish. In contrast with the aloe vera salesman, his bellowing acoustic melodies are a magnificent accompaniment to the countryside that rolls by. 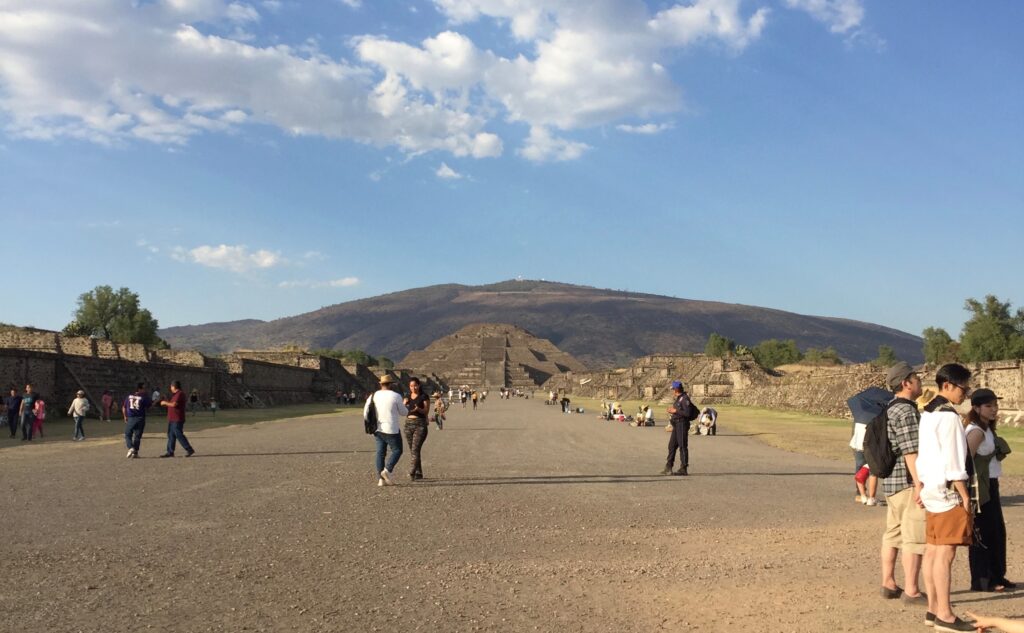 The first thing I feel at Teotihuacán is the heat; the first thing I observe is an absurd number of cacti filling the horizon, all at once welcoming in comical shapes and foreboding with dagger sharp needles.

It is said that Teotihuacán is where the Gods were born. The origins of this ancient city pre-date the Aztecs. Anthropologists believe that the city was settled around 100 B.C. but no one knows who built it or why they left suddenly and mysteriously around 700 A.D.

It’s hard to picture now as I look out at the stretches of football-sized fields before me, empty swaths of grassland interrupted only by a few stone walls and looming pyramid structures, but at its height the city was larger than contemporary Rome, making it the biggest city in the world, home to an estimated 100,000 people.

The paths near the entryway of this UNESCO World Heritage Site are filled with vendors selling cheap souvenirs. All around local families mill about enjoying the Sunday. I follow the Avenue of the Dead, the address of a number of temples the city’s two main attractions – the Pyramid of the Sun and the Pyramid of the Moon, aligned perfectly with celestial movements.

In the heat I slowly reach the Pyramid of the Sun and languidly summit, dragging one foot after the other up over the ragged stones. There are no guardrails and the stones are uneven and worn slick by time.

As I reach the third and final set of stairs my speed slows to a cautious crawl. That climbing with your own hands and feet up a man-made structure so old it likely pre-dates the birth of Jesus is an experience you can actually have on this planet blows my mind.

At the top I feel a sense of magic. The platform stretches out like a large picnic blanket and many people are gathered here, leisurely enjoying the views. I sit down on rocks warmed eternally by the sun and look out at the expanse of earth before me. The ground below seems to pulsate with a sense of calm and my body radiates with energy.

I should get up and move on to the Pyramid of the Moon to complete my visit, but I’m compelled only to stay in place and observe. All around I’m surrounded by love in its many forms. Couples. Families. Friends. A young man takes my picture with great care and kindness in his heart while nearby a daughter does the same for her mom. 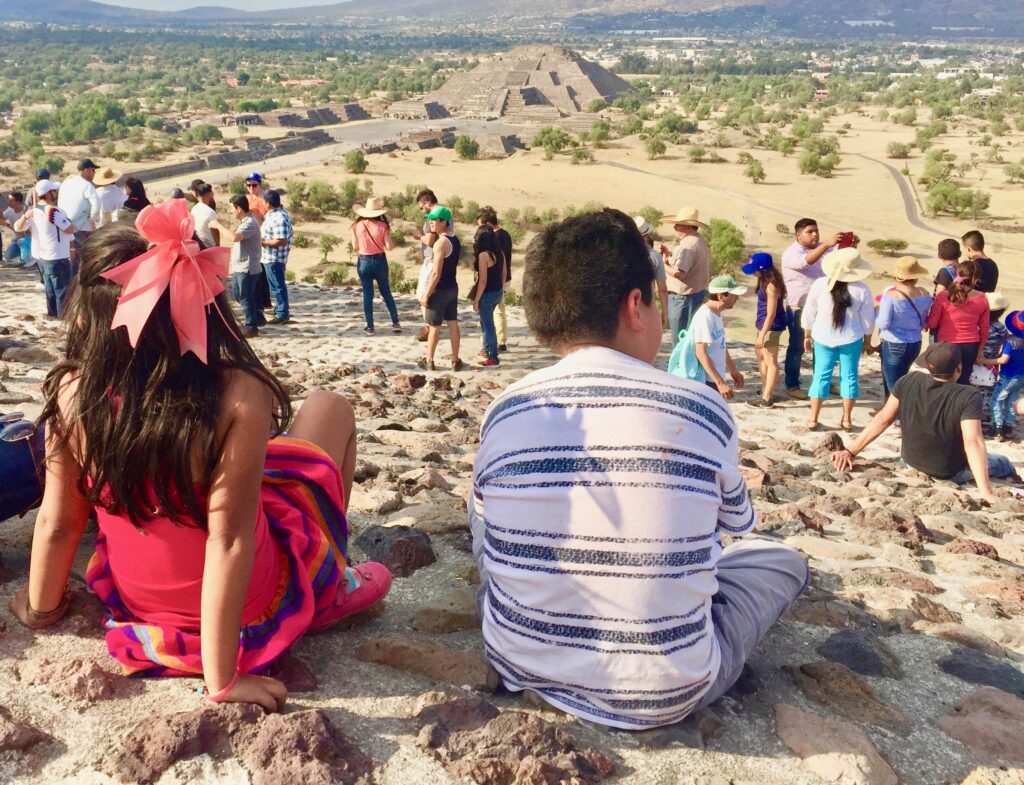 A few feet from where I sit the most gorgeous, brave and outgoing little girl jumps around in a vibrant pink tank top and skirt, filling the horizon with her energetic spirit and brightness. Nearby her brother, a few years older than her, complains of the sun. She sits next to him and slowly sinks over his stretched out body, her face coming close to his beaming with a smile. The boy closes his eyes and rests with peace on his face, covered from the harsh sun by his sister’s shadow.

The familiar ache that has crept up on me as I travel in my thirties and see cute children around the world kicks in. A moment of peace passes and the girl pops up, darting away from her brother with jokes and laughter. I know not where their parents are. These children are free. The girl bops around and teases her brother and I recognize in her the same independent will that I see in myself.

What are you going to do with all that strength?