My feet sink into the crisp, tan sand on Vieques Island and carry me out into crystal water. As the water reaches mid-calf, its hue deepens into a soft blue that matches the sky, and by the time I reach the rest of my family who are all blissfully wading waist level, the water is full on tropical turquoise.

As far as the eye can see, the water gently rolls out into the horizon, crescendoing in brightness and tone every few feet. From the shores of Vieques the only interruption to the jewel-toned ocean is a small island, a verdant mound that juts up in the distance, and a collection of sail boats that bob up and down with the smooth waves.

The scene before us is so picturesque it belongs on a postcard, and I could leave this story at that, posting stunning photo after stunning photo that may make some green errr blue with envy. But this, my friends would not tell you the full story of Vieques Island, which is my intention today.

How to Get to Vieques Island 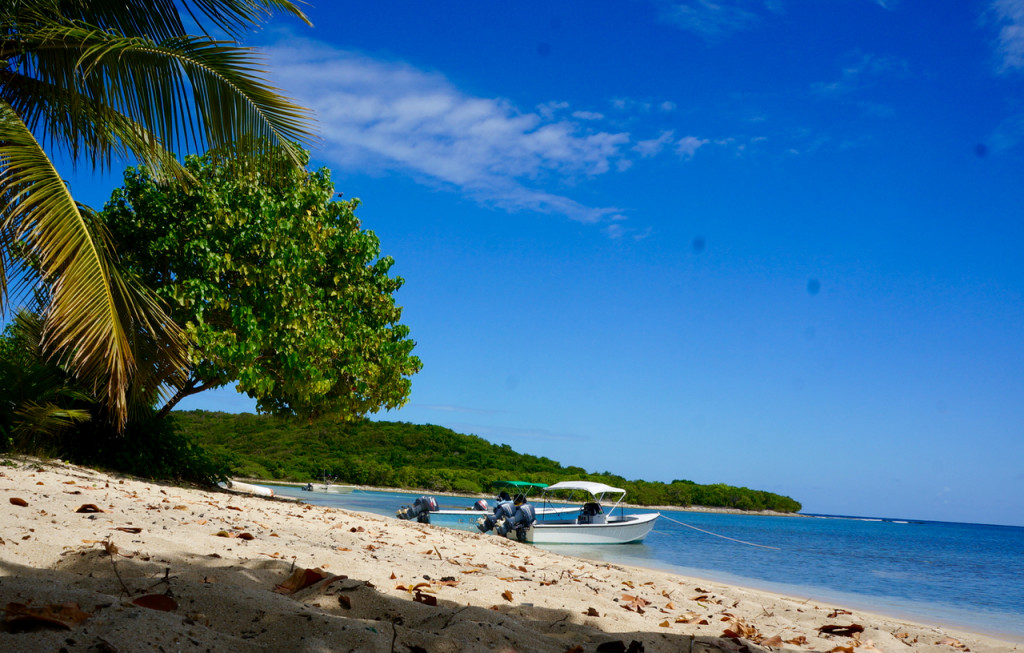 The journey to Vieques, the largest of the islands off the coast of Puerto Rico, is an arduous one if traveling by ferry. It may seem that my family spent time during a visit to Puerto Rico, an island in itself, visiting another island, but the promise of glistening beaches and the opportunity to see a fife rent side of this U.S. territory called us to take a day trip.

Vieques can be accessed by air ($65 one-way) or by an extremely affordable ferry that costs just $4 per person round trip. The 90-minute boat journey across the Caribbean sea is not onerous in itself, but the process of getting on the ferry is. Ferries to the island leave from the port town of Fajardo. Ferry tickets can’t be purchased in advance, nor can reservations be made online. At the advice of locals, we arrived in Fajardo at 6:30 a.m. for the 9 a.m. ferry. We happened to be visiting on a holiday weekend, and by the time we arrived the queue was already tremendously long, filled with families all toting ice chests and suitcases, preparing to celebrate the in typical boriqua style (that is in a house by the beach packed with family and beer).

The next ferry does not depart until 1 p.m. which doesn’t allow for a day trip, and it seemed our fate was doomed until, just before 9 when the line finally picked up speed and we were able to purchase nearly the last tickets issued before a late departure. Once aboard the journey to Vieques went without much to note – apart from the occasional shrieks of laughter from groups around us that echoed off the windows and walls of the confined cabin space, interrupting our broken naps.

On the Shores of Vieques 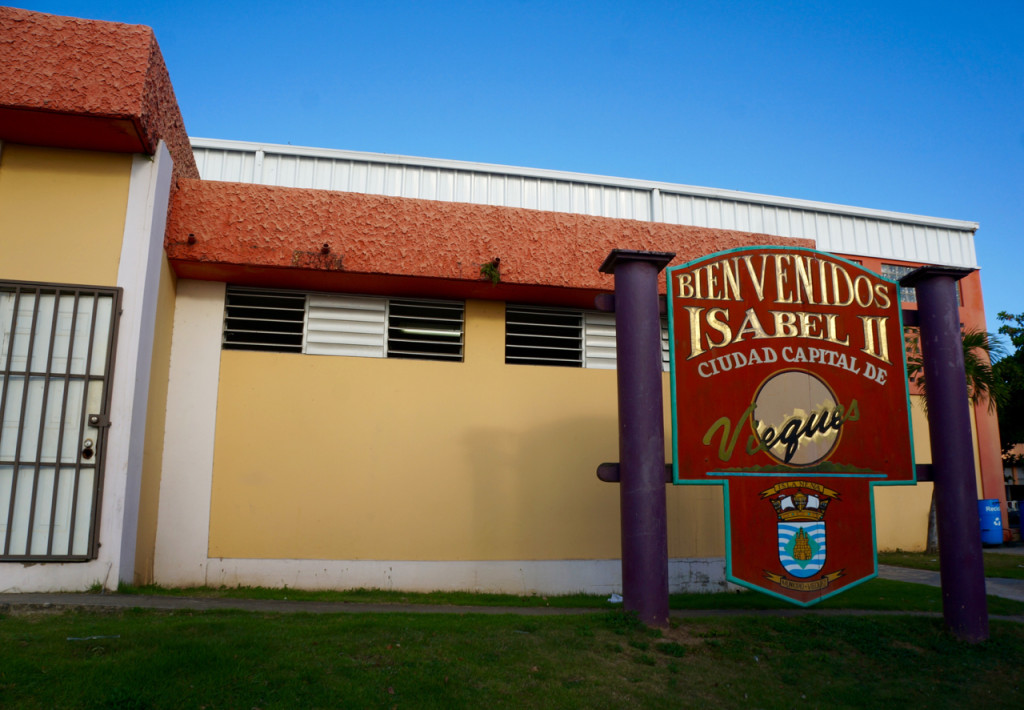 As the ferry pulls into the dock and we leisurely disembark, the town of Isabel Segunda bustles with taxistas and food vendors, as most port towns around the world tend to do. On the return journey I’ll stop and buy a smoothie at a stand operated by a woman from Colorado whose lived on the island for 17 years. She harvests fresh milk from her neighbor’s coconuts every morning and comes down to the terminal where her day ebbs and flows by the ferry’s arrival. In her face I see the woman I may have become had I decided to continue living in the rainforest of Costa Rica.

The island is 21 miles wide and five miles long, so unless you are planning a longer stay to explore some of the more off the beaten path beaches, a car isn’t really necessary for a day trip. We left our rental back in Fajardo and quickly found a van to transport us to Esperanza, the island’s second town and a haven of beaches.

Like most everyone else we’ve encountered in Puerto Rico, our driver speaks English and uses the ten-minute journey to tell us a little about this island. 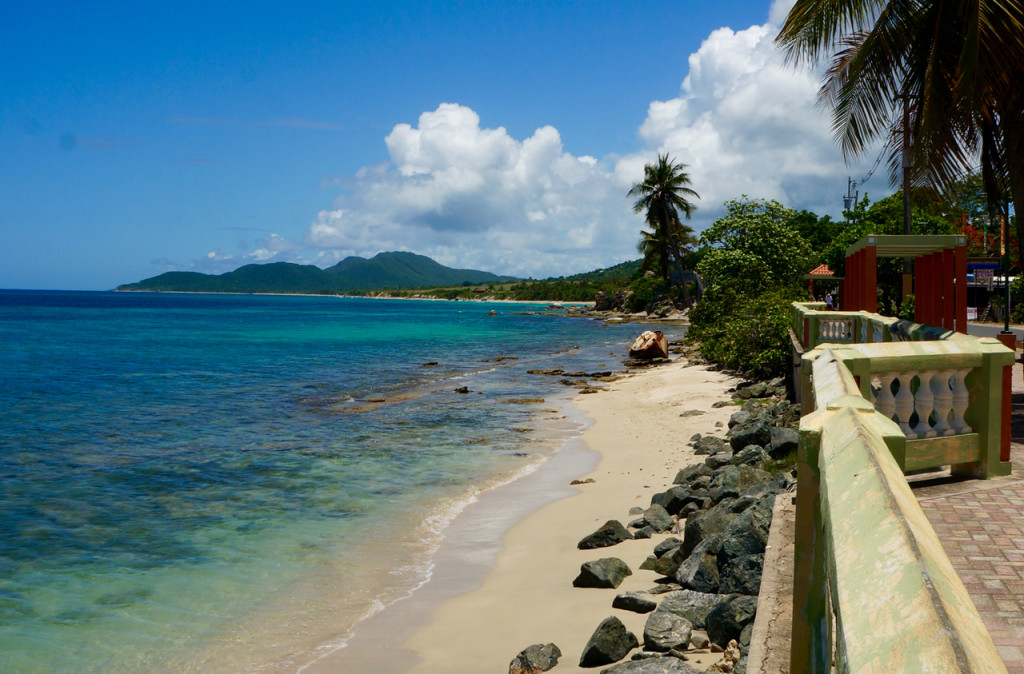 The name Vieques comes from a misunderstanding by the Spanish of the word the Taino, the indigenous population of puerto Rico used for “small island.” When Christopher Columbus landed in Puerto Rico in 1493, many Taino from the mainland fled to Vieques in hopes of escaping colonization. A few years later, however, the Spanish came to Vieques as well, killing or enslaving the entire native population.

Under Spanish rule Vieques housed smugglers and sugar cane plantations. When the United States gained control of Puerto Rico following victory in the Spanish-American war in 1898, the island was largely neglected and sugar cane production came to a near halt. During World War II the U.S. military took control of 70 percent of the island, using it first as a safe haven for the British Navy and later to test weapons during the Cold War. In 2003, the military turned the land over to the U.S. Fish and Wildlife Service. To this end, the majority of the island remains largely undeveloped, making it a hidden escape for non-fussy travelers in search of unspoiled nature. 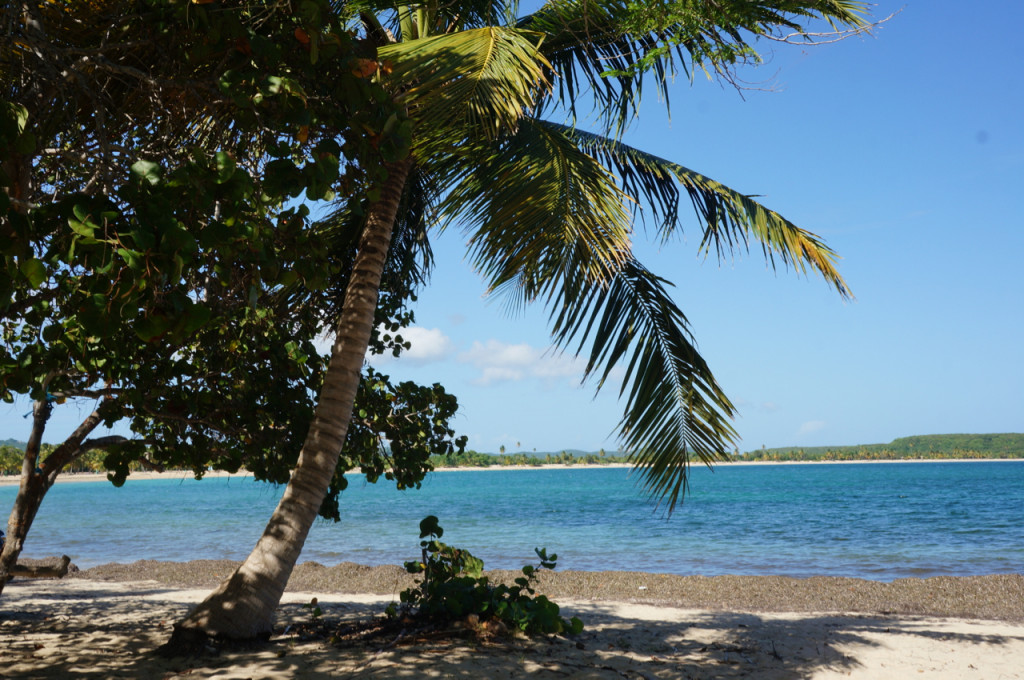 The majority of the few hotels and restaurants on Vieques are owned by Americans – our taxi driver explained that tax breaks were given to business owners from the United States, driving out most of the local businesses. In Esperanza we eat at a cafe and then stroll down Calle Flamboyant, an avenue lining the water.

You can easily rent snorkeling equipment on Vieques at Fun Brothers, a dive shop that has a shack located conveniently steps from the ocean. We check out snorkeling gear and continue on to a shady grove of trees where we lay our towels out in the sand before heading out into the ocean together as a family.

Carrying the perfect swimwear before you enter the ocean is essential if you don’t have one, get your perfect swim suit by visiting The Hut which provides you a wide range of swimsuits collection. 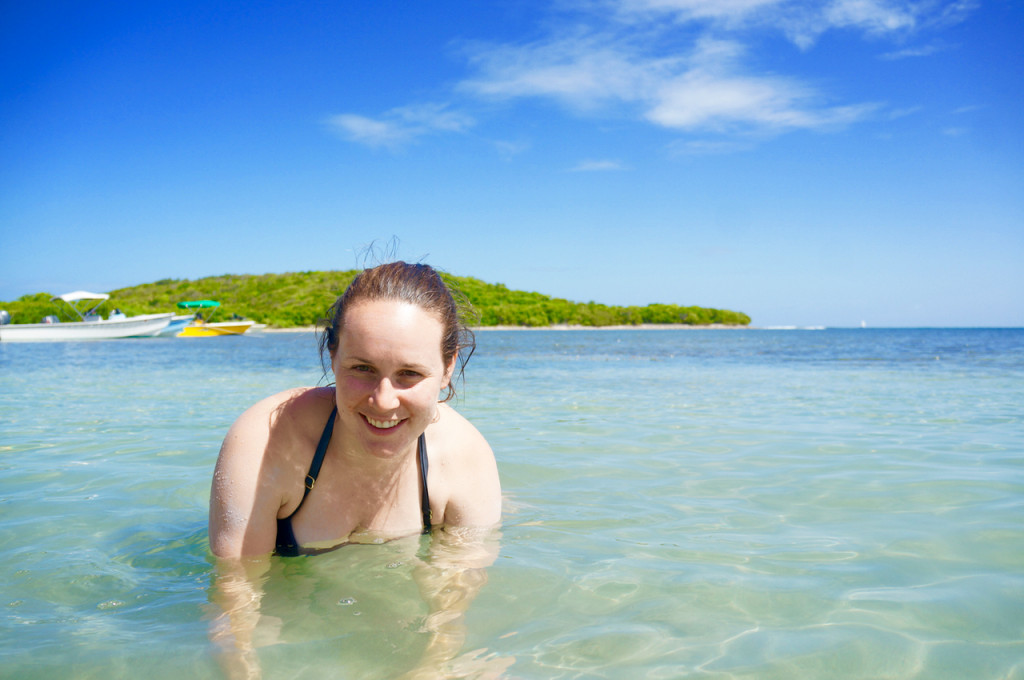 I swim out towards a green island and snorkel over coral reefs as colorful fish pass underneath. Later on in the afternoon the highlight of the day will come when a small, yellow octopus darts in front of my mask and spirals downward to hide in the crevices of a rock that sits on the ocean floor. 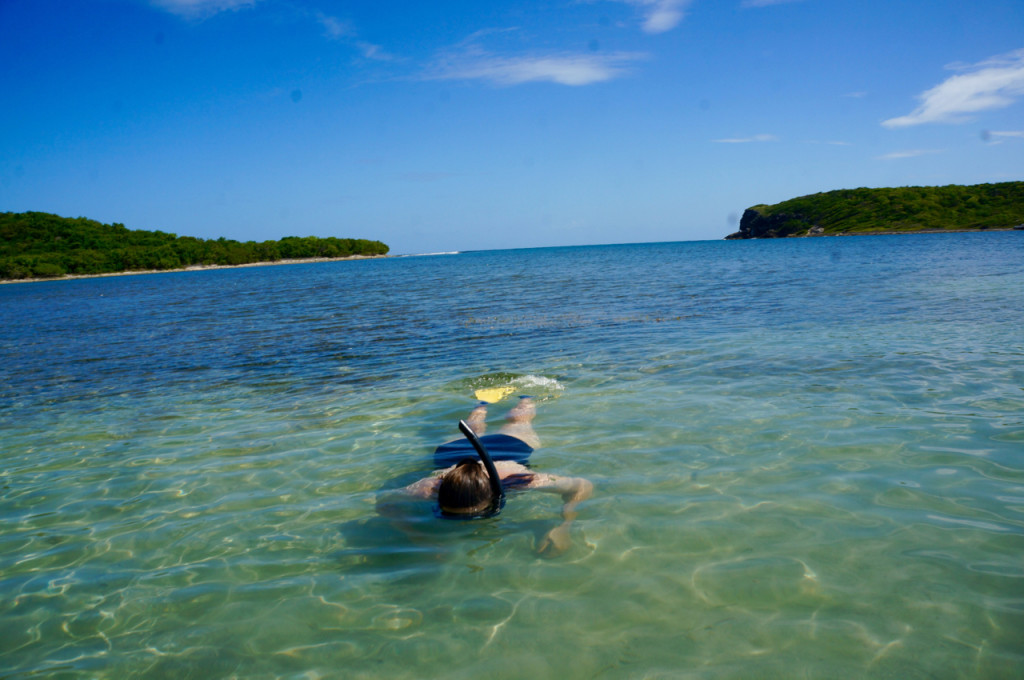 We are gently floating in the water, my sister, mom and I, when something happens that disrupts the picturesque quality of the scene. A brown dog chases an iguana out of a bush and both scuttle down to where the waves meet the sand. The dog barks and the iguana tenses, engaging in a bob and weave dance that mimics fencers. At first it appears as if the two species are playing and we laugh, remarking how similar this looks to the way our two dogs play at home. Soon however our ignorance is revealed when the iguana stops moving. I rush over with my brother to find the iguana’s face paralyzed in horror – it is the face of a dying animal, the face of a creature who has given all its fight to live and failed, a face of agony that haunts me on the ferry ride home. It is a face that reminds us how wild Vieques is, an island that is so much more than the well-manicured images that grace the front of postcards.