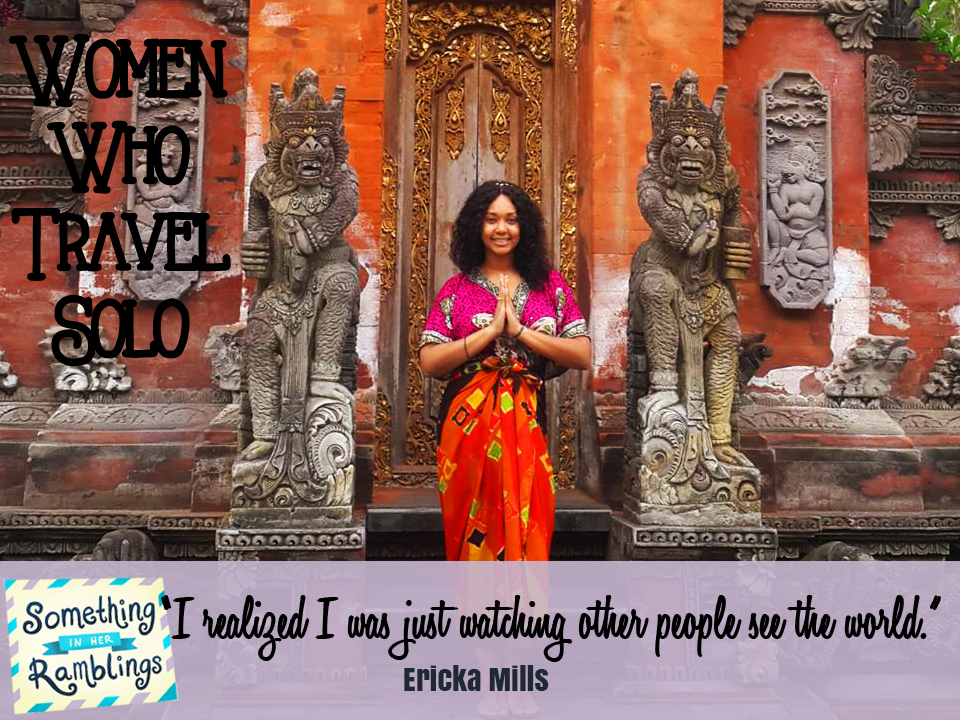 Female solo traveler Ericka Mills follows in the footsteps of Elizabeth Gilbert’s Eat, Pray, Love and shares her memories from a solo trip to Bali in this week’s Women Who Travel Solo.

My travel bug started from when I was a little girl and my mother and I would take road trips along the east coast. Inevitably, I wanted to go beyond the coast and I knew that would happen when I was old enough and mature enough to make my own decisions. I used to miss out on a lot of opportunities by waiting for other people to come with me on trips. At a certain point I realized I was just watching other people see the world with the excuse that I had no one to go with. I decided to make a change and go for it alone because I didn’t want to look back at my life and say I never went anywhere because I couldn’t find other people to go with. After my first solo trip there was no stopping me.

Why did you decide to travel to your chosen destination alone?

After watching Eat, Pray, Love, Bali became a fantasized location in my subconscious. When I decided to go to Bali alone, many people told me that it was a popular place just for couples and romance but I viewed it as a great place to unwind, relax and enjoy unique cultural arts. 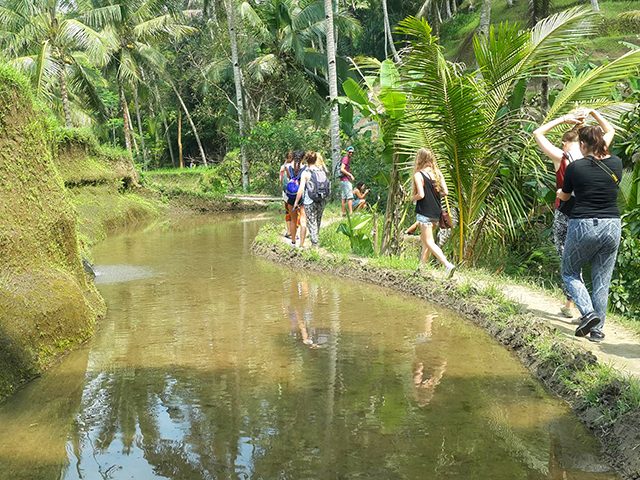 Tell us about your experience with solo travel in Bali.

When I first arrived in Bali I was excited and nervous, like I always am in a new place. The nerves faded away when I met the hostel pickup driver and felt the glorious sunshine on my face. The driver dropped me off at my Kuta hostel and I was instantly approached by warm friendly smiles at the front desk.  They helped me get settled in and plan pickup for the next day to go to a different part of the island, Sanur Beach.

The beauty of traveling alone is that I don’t have to ask if others are ready to eat and what type of restaurant they want to go to; it’s all up to me. I explored the narrow busy streets of Kuta before settling down to eat. One thing you notice right away, are all the taxi drivers and store owners fighting for your attention. It’s nice that most people speak Basic English among multiple other languages they adopted through interaction with tourists (like Japanese), which is so impressive.

When I usually go on a solo trip, I try to plan the details of every moment, just in case communication is a barrier, but some things happen that you just can’t control. Even though I arranged pickup to go to Sanur, I was not exactly sure where I would be dropped off. Of course, there are usually bystanders everywhere asking if you need a taxi so I was lucky enough to find a really nice driver to take me to my beach activity and back to Kuta. He became my trustworthy driver who gave me helpful advice of things to see in Bali and where, especially, to see them.

The one thing that became abundantly obvious is how expensive Bali can get when you have to drive everywhere because things are not close to each other and there is usually bad traffic. Buses don’t run frequently and there are no trains, so you either have to drive yourself or find someone else to drive you. Without someone to help split the transportation bill with you, it can be the biggest expense on the island.

Through my previous solo adventures, I learned hostels can be the best way to meet other solo travelers to hang out with or just talk to. Bali was no exception but a lot of travelers I met had the same mindset of moving around the island and staying in more than one place. This, unfortunately, meant I didn’t have much time to get to know anyone but they were able to give me great reviews if they had stayed there before me. I even met some people along the way while sightseeing and joined their party. While walking along the Tegalalang Rice Terraces, I saw many children selling postcards. A boy was walking by me and another tourist when he said, “Can you please buy a postcard? It’s for my school.” During my brief contemplation, the other tourist (another solo female traveler) quickly reached in her bag, took out some change, and said, “Here you are.” This caused us to strike up a conversation and she revealed that, even if there is a slight chance he will use the money for school, it’s worth it. We ended up exploring the terraces together along with the other Dutch tourists on her bus. 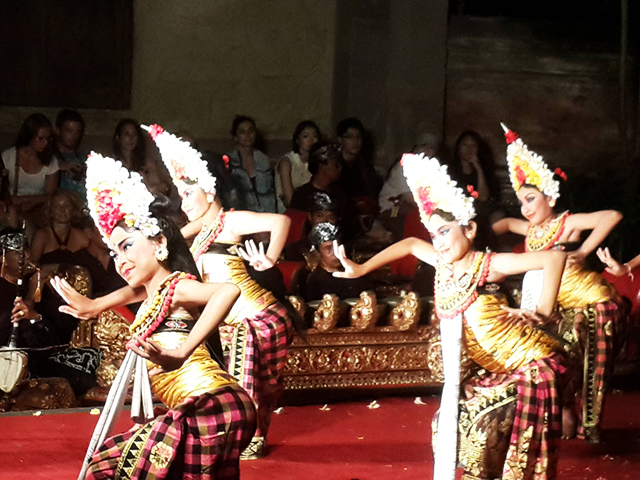 What recommendations do you have for solo travelers in Bali?

I highly recommend Ubud for solo travelers because it’s in a very central location and there are a lot of cultural events and landmarks to experience. Most things are walking distance from the center of Ubud like the palace, temples, monkey forest, the infamous Yoga Barn and Jazz Cafe. It has a laid back vibe without being boring.

Make sure you bring your walking shoes and be prepared to eat a lot of fried food! Nasi means fried and goreng means rice. The satay and seafood are delicious as well as fresh fruit. Local food is very inexpensive but there are also many western food restaurants if you get tired of it. I recommend trying an art class in Ubud. If you like the beach coupled with a party atmosphere I recommend Seminyak, although I stayed in Kuta which was a taxi ride away. If you just want to relax at a nice resort by the beach in peace and quiet, Sanur is a very tranquil area.

I highly recommend trying Seawalker there, where you can put on a helmet and walk along the bottom of the sea feeding the colorful fish along the coral reefs. Be advised that if you sign up for a tour alone, you will stay alone with a private driver and you will less likely be able to meet people on that tour. They also charge more if you book alone and less if you book with two people. With that said, make sure you bring plenty of money, especially cash. Most restaurants and drivers do not take credit so save your credit for souvenirs. 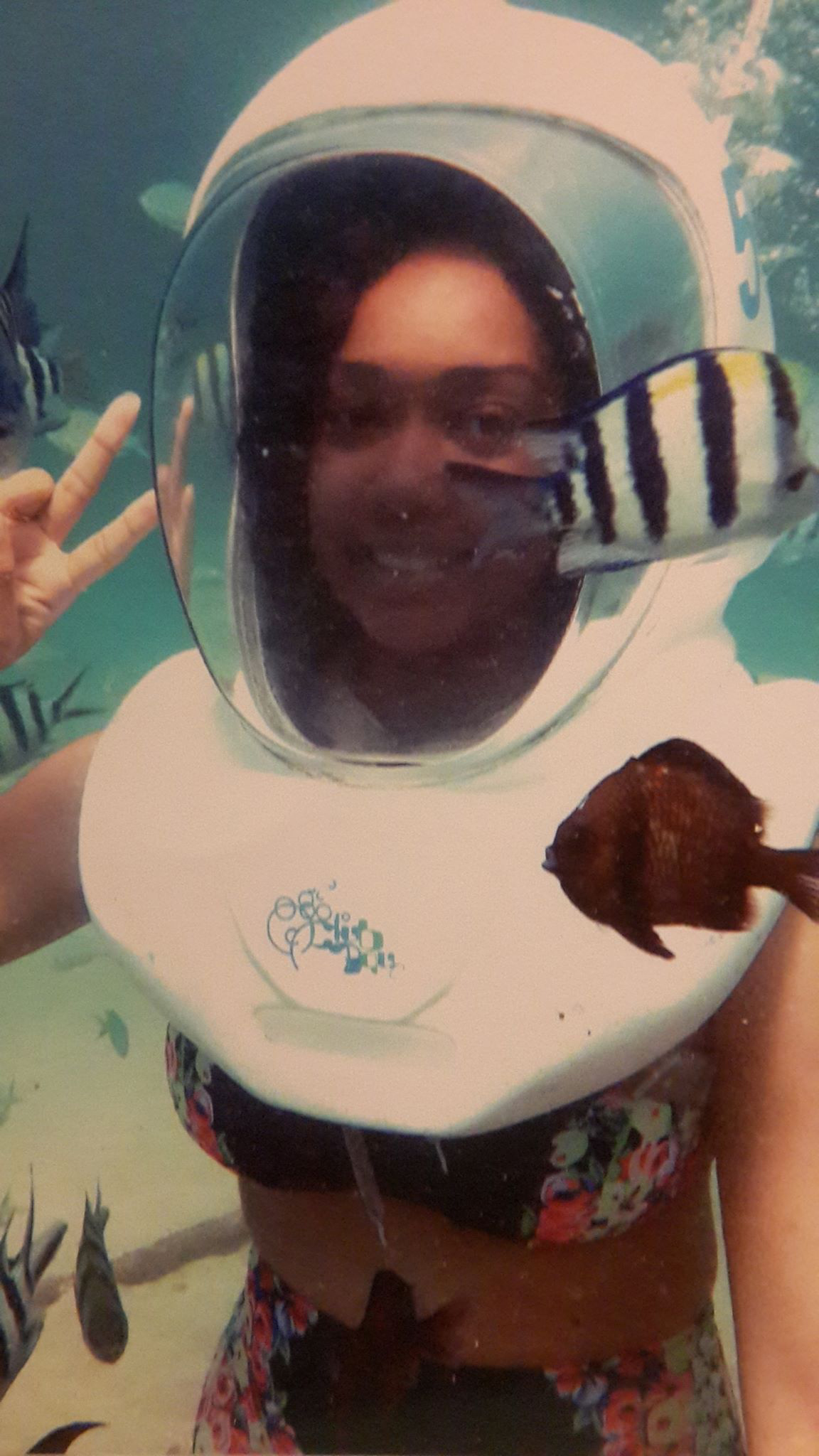 What was the best part of your solo trip to Bali?

The best part of my trip was actually when I visited a local school that provided free education to one of the poorer neighborhoods. I met some kindergarten students who were so focused on their coloring, they didn’t even notice me, but they were so cute. Their parents were all standing outside the classrooms eagerly watching them because the children were new to school and only stay there about an hour every day to get acclimated to it. I was excited to donate some pencils and notebooks and hoped it would help somehow. I learned from my guide that school is not free in Bali and some students stop going to help their parents work.

I also loved my Balinese dance class where I got to learn first-hand the beautiful intricate movements used in traditional performances. It allowed me to appreciate the hard work and devotion of the performers I later saw in Ubud. They are able to tell a story by the flick of a wrist and the bat of on eye. 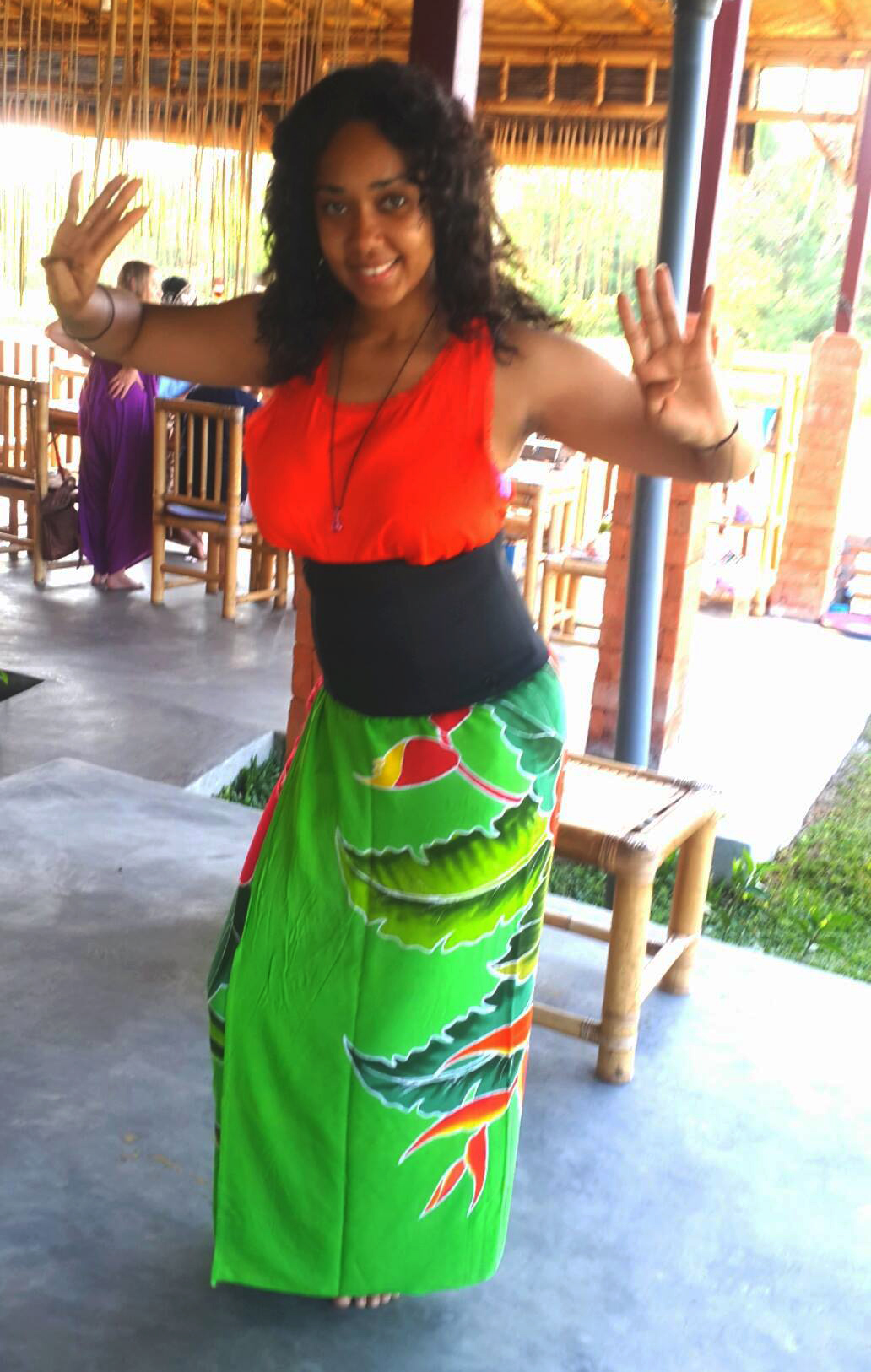 What was the worst part of your solo trip to Bali?

The worst part of the trip was how expensive transportation was and how isolated the tours were. I am also not an outdoorsy person so my last hostel was not meant for me because it was too open to nature. There were lizards, cicadas, frogs, mosquitos, and large cockroaches all freely roaming around. I couldn’t sleep at night from paranoia but, if you’re the type of person who likes camping and treehouses, it could be a great place to stay. The freedom of smokers to smoke inside the hostels also made my stays uncomfortable. If I return, I know to definitely stay at a resort.

Are there any safety concerns for women traveling alone to Bali?

There are a lot of men that hang out late at night in the shadows but they are usually taxi drivers or hanging outside of their house. Just be aware of your surroundings and try not to walk around really late in low lit areas. 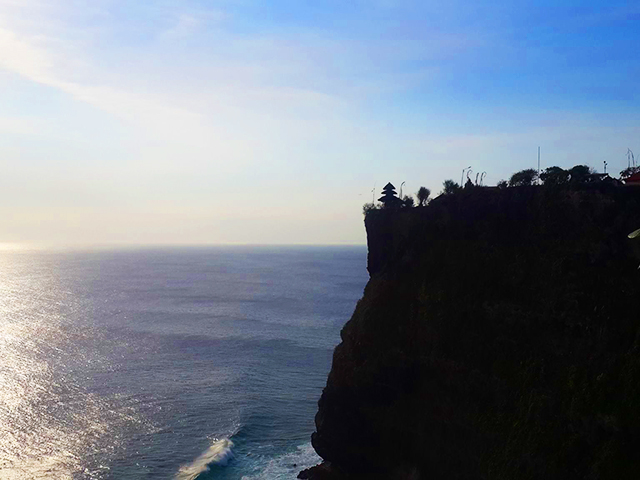 Other women traveling alone should leave a general vacation plan that someone back at home can keep just to know where they may be if an issue arises. Always be aware of your surroundings but don’t be too scared to meet new people and try new things. If it feels wrong, it’s probably wrong.

You may live in one small neighborhood, in one town or city, in one province/state, in one country, on one continent, on one side of the world, but that doesn’t mean you have to stay there forever. The world is such a big place that we’d be lucky to see even half of it in our lifetime, so why not start now! What are you waiting for? 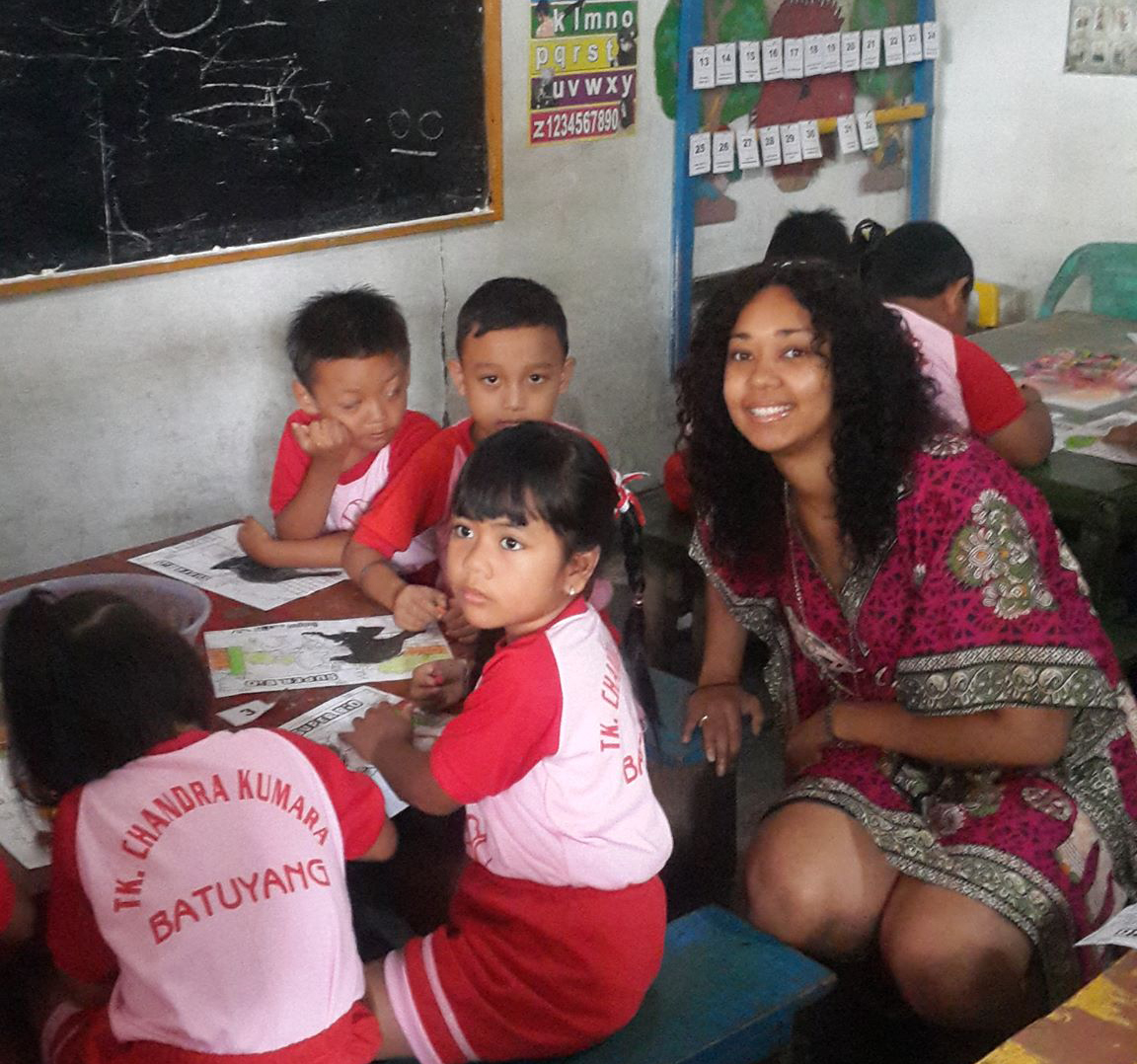 Ericka Mills is a thrill seeker who loves adventure sports and trying new things in general. Travel is a form of medicine for her so it wasn’t surprising when she uprooted her stable life in Washington, DC to live in South Korea, where she didn’t know anybody or speak the language. Ericka worked for 5 years as a graphic designer before becoming an elementary school teacher in South Korea. She has never abandoned her thirst for art and drew inspiration from the beauty of Asia.

Where to Stay in Bali