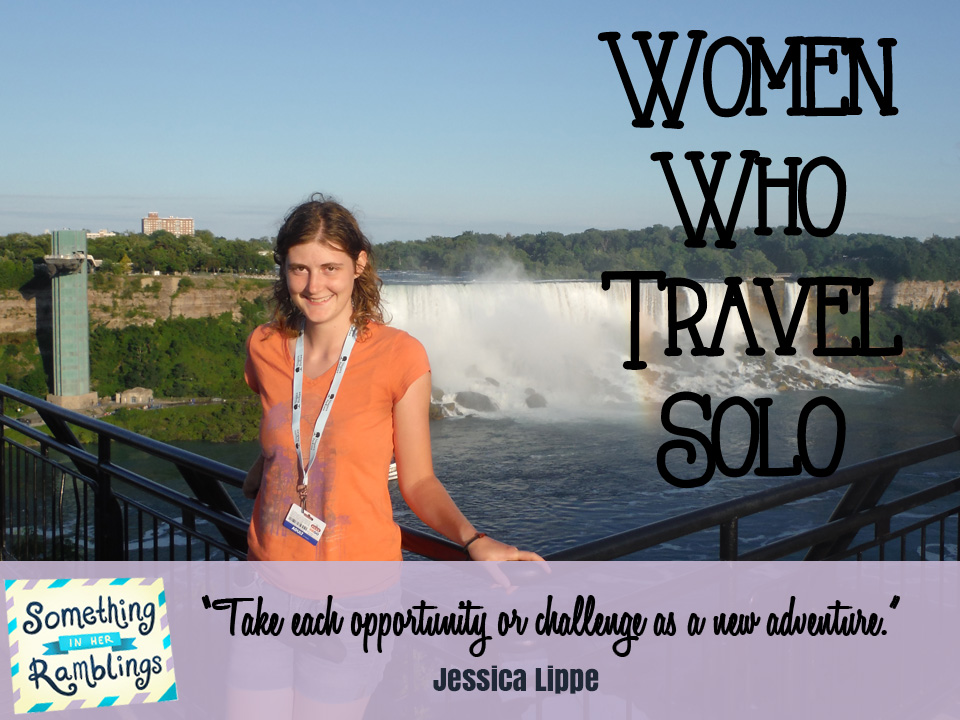 Jessica Lippe is a freelance writer and self-proclaimed “adventurist” who currently resides in the United States. In this week’s Women Who Travel Solo, Jessica shares her tips and insight for a solo trip to Niagara Falls.

I have always loved traveling. Besides family vacations growing up, my church got me involved in out-of-state trips, and even international mission trips, starting as a young teen. When I was twenty, I left my home in Oregon for a camp internship in Nebraska. There, I was met many other people who were also bitten by the travel bug. That’s when I decided to take my first solo trip to Nashville, and many more trips followed!

Why did you decide to travel to Niagra Falls alone?

After going to Nashville, I decided that I wanted to take a solo budget trip every year. I wanted to try out the Greyhound bus since that would help save me even more money, so I began searching for destinations that I could get to with that service. I decided to do a solo trip to Niagara Falls since that would allow me to visit Canada for the first time while still staying close to my home country. However, I ended up moving to Ohio that year, so my trip budget instead went toward an epic moving adventure road trip. But the next summer, I realized that it would actually be the perfect time to go to Niagara Falls. My Ohio home was much closer (meaning lower cost and less travel time), so I booked a bus ticket, contacted hostels, and took time off of work for a nine-day Niagara Falls adventure! 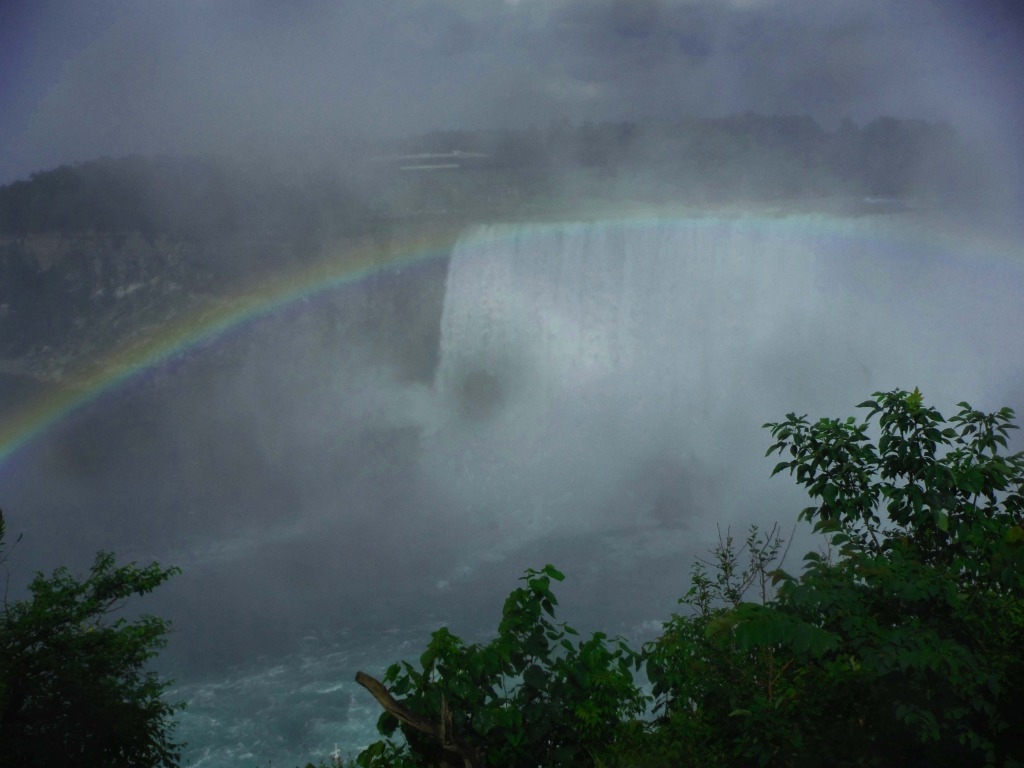 Tell us about your solo trip to Niagara Falls.

Niagara Falls is typically thought of as a honeymoon location. In fact, one thing I saw on my first day was a wedding taking place at the park! But this place does have a lot for solo travelers to do, and I was glad that I met other solo travelers who thought the same thing! Attractions like Maid of the Mist and Cave of the Winds are the same experience whether your travel group is one, two, or twenty people. During one afternoon I took a hiking/biking trip through all three state parks along the Niagara Gorge, and that in itself was a fantastic experience that allowed me time to reflect and also realize how strong I can be!

Niagara Falls seems to be a perfect place for all types of travelers. Outdoor adventure seekers, city explorers, and typical tourists can all find something to love in Niagara Falls.

Yes, there is something about watching the waterfalls that can give you romantic thoughts, and there were a few instances where I thought about how I was alone. But the good thing was I never felt lonely. I met some amazing fellow solo travelers in the hostels and at the parks, including a Japanese student who was on a bicycle trip from Los Angeles to New York City, an Indian traveler who asked me to dance under the waterfalls with him, and a regional solo traveler who kindly offered to take pictures of the solo travelers he encountered so they would have at least one picture without the “selfie arm.” In fact, traveling solo gave me the independence to accomplish anything I wanted to do. While some people only spend a weekend, or sometimes just a day, at Niagara Falls, I never got bored on my extended trip as I found plenty of things to do in and around the area. 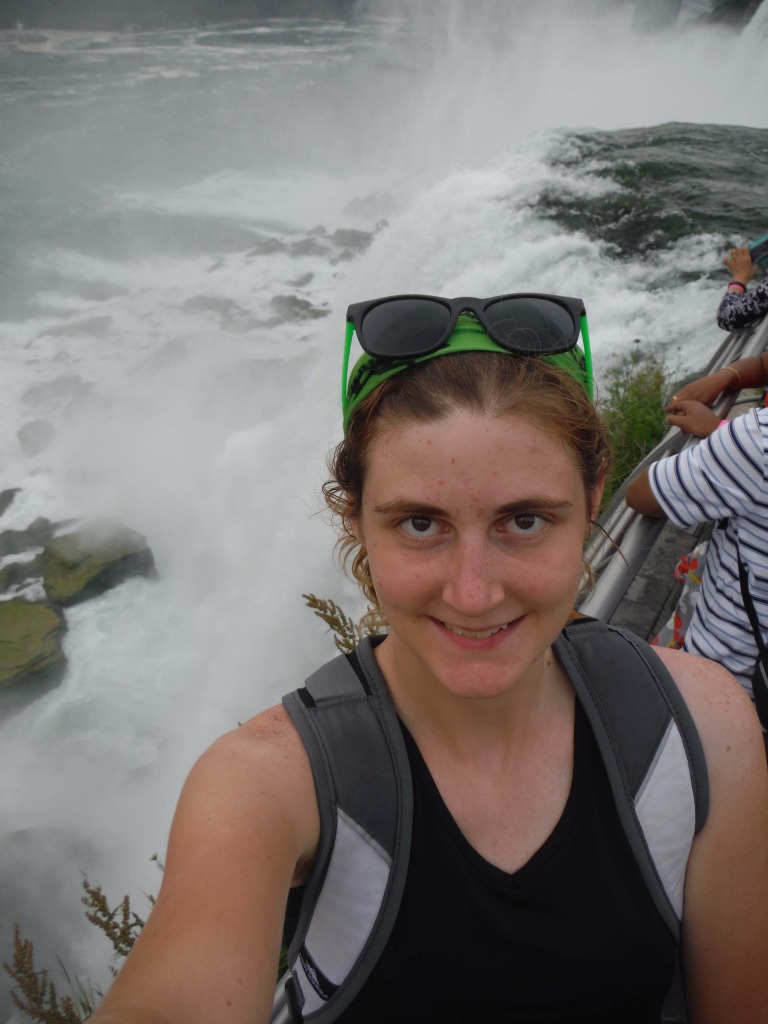 What recommendations do you have for those who are traveling alone to Niagra Falls?

Definitely stay in a hostel. There are plenty of hotels around, but they are overpriced and will prevent you from meeting like-minded travelers. Some people stay in Buffalo, New York or Toronto, Ontario, to save money but you really should stay in Niagara Falls to ensure that the maximum amount of time can be spent exploring the area on foot instead of commuting the freeway.

I stayed in Gorge View Hostel on the American side and Niagara Backpacker’s Hostel on the Canadian side. Both of these hostels are large enough to ensure you’ll meet other travelers, but small enough that the only employee you’ll probably meet is the owner himself!

On the New York side, I took advantage of the abundant and cost-effective Indian restaurants. There is also a building shaped like a giant ice cream cone called Twist O’ the Mist, which has dozens of flavors of ice cream! On the Ontario side, the best restaurant I ate at was called the Secret Garden. It was reasonably priced and the outdoor seating had a beautiful view of a garden overlooking the falls!

One of the first things you should do while there is go on one of the attractions like Hornblower Niagara Cruise, Cave of the Winds, or Journey Behind the Falls. The reason behind this is that these come with a free rain poncho that you get to keep. Even in midsummer, rain storms can happen. I met a family in a gift shop who were about to spend over $50 for rain ponchos that they were going to get for free with Maid of the Mist!

One final recommendation: take your time here. I saw way to many people feeling rushed and missing out on great experiences because they were trying to cram Niagara Falls into just one or two days!

What was the best part of your solo trip to Niagara Falls?

One of the best experiences is walking across the Rainbow Bridge from one country to the other. (Be sure to walk instead of drive so you can breeze through customs instead of waiting an hour in line.) At the center of the bridge there is a sign to let you know where you can stand so you can be in two nations at once! It also has one of the best views of all three waterfalls. 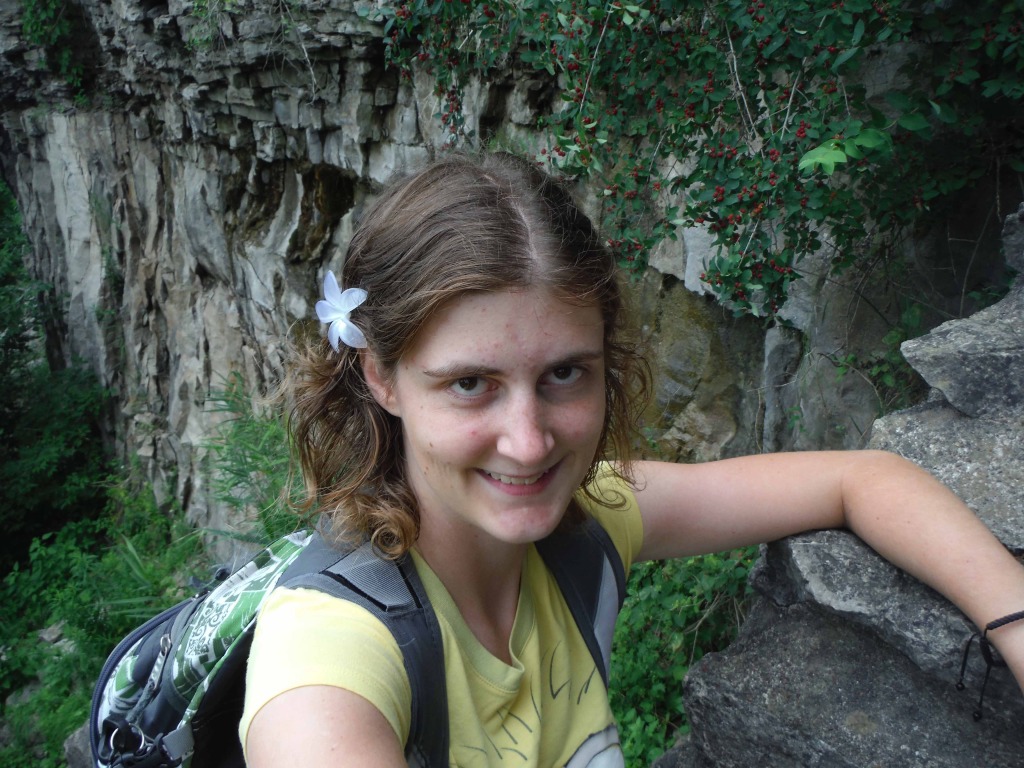 What was the worst part of your solo trip to Niagara Falls?

Even though I went in July, there were several bouts of rain. It’s best to be prepared and be flexible. During times of rain, you might as well adjust your itinerary and go to Cave of the Winds or Maid of the Mist. You’ll be exposed to so much downpour from the waterfall, you won’t even notice the trickle of rain from the sky! The rain actually has its upsides, too. One day the rain made the air so moist that I could literally see the mist from the falls turning into clouds right before my eyes!

Are there any safety concerns for women traveling alone to this destination? If so, how can they avoid them?

One of my roommates had a scare one night as she encountered a drunken homeless person. But I personally felt very safe for the entire trip. My general rule of solo travel is that I do not go out alone after dark, but I did make a couple exceptions on this trip due to the stunning light display projected onto the falls. I found it best to do this on the Canadian side, not only because you can see the lights better from this view, but also because Canada’s WeGo bus system services the area very well so that you’ll be dropped off close to where you’re staying.

In the summer, there are also fireworks. If you happen to be on the New York side for a night with fireworks, make sure to stay at Gorge View Hostel. You won’t even have to leave the hostel at night to get the best view of the fireworks because the owner invites all the guests on top of the roof!

Outside of the tourist area in Niagara Falls, New York, there is certainly an inner-city type of feel. If that makes you feel uncomfortable, you will be just fine sticking to the tourist attractions. However, I did spend a day working with The Magdalene Project, which helps low-income women, children, and families in the Niagara Falls area. If you spend some time getting to know and understand the people of this area, you’ll realize that you actually have a lot in common with them! 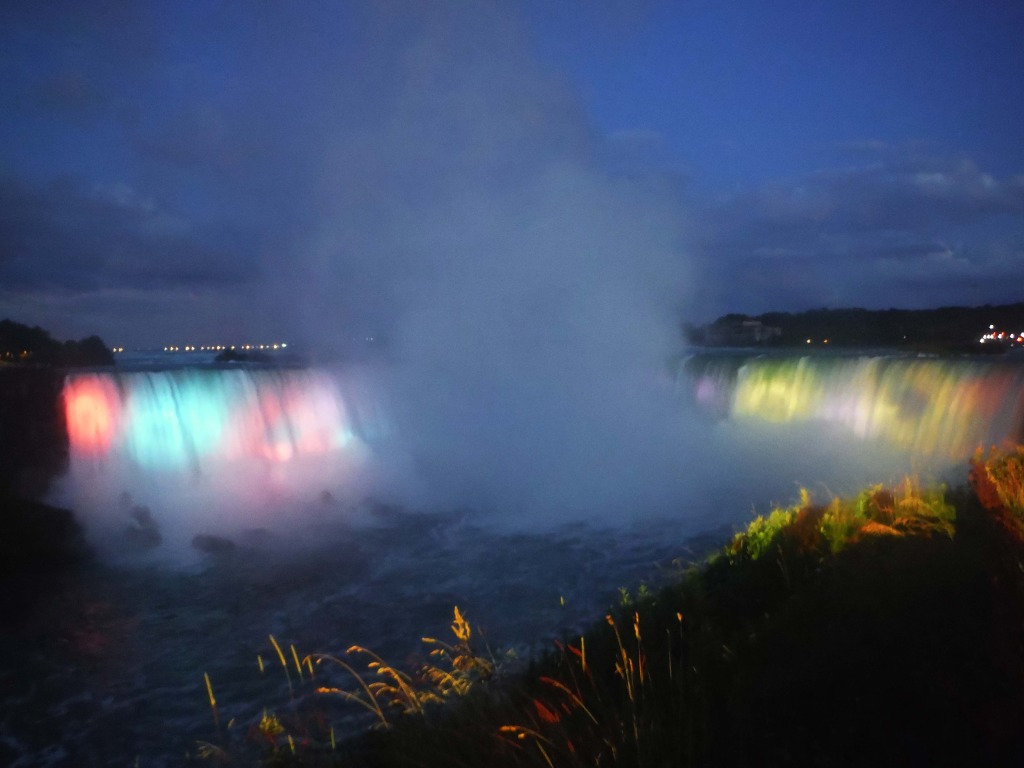 Be open to new experiences, and take each opportunity or challenge as a new adventure. I never rode a long-distance bus before this trip. It wasn’t first-class transportation, but I now have experience with low-cost travel under my belt. If I wasn’t for that, I probably wouldn’t have been brave enough to ride the Greyhound across the country a month later.

When staying in hostels, I prefer to stay in female-only dorms instead of mixed-gender dorms. It provides an extra feeling of security, and it’s kind of like a grown-up version of a slumber party. (Plus female-only rooms tend to be cleaner and nicer.) Fortunately both hostels I stayed at in Niagara Falls had female dorms available.

I know this next piece of advice might be mind-boggling for some, but it drastically improves the way I travel: pack light! I brought a small, carry-on size suitcase and a backpack. This allowed me the freedom to walk everywhere around Niagara Falls starting from the time I stepped off the bus. I think this is the perfect amount of luggage, whether visiting friends for the weekend or taking a three-month overseas excursion.

While Niagara Falls wasn’t my first solo trip, it was a major turning point for how I would conduct all my future travel. I’ve had the goal of backpacking through Europe for as long as I can remember, and it was in Niagara Falls that I decided I was empowered enough to pursue that goal. The month after visiting Niagara Falls, my sister visited me for the first time in Ohio, and I could confidently show her around like a seasoned tour guide. Shortly after that, I quit my job and took my second-ever bus trip all the way across the United States with stops in Chicago, Nebraska, Colorado, and finally back home to Oregon so I could pursue my goal. Now I’m leaving for Europe in just a few short weeks! 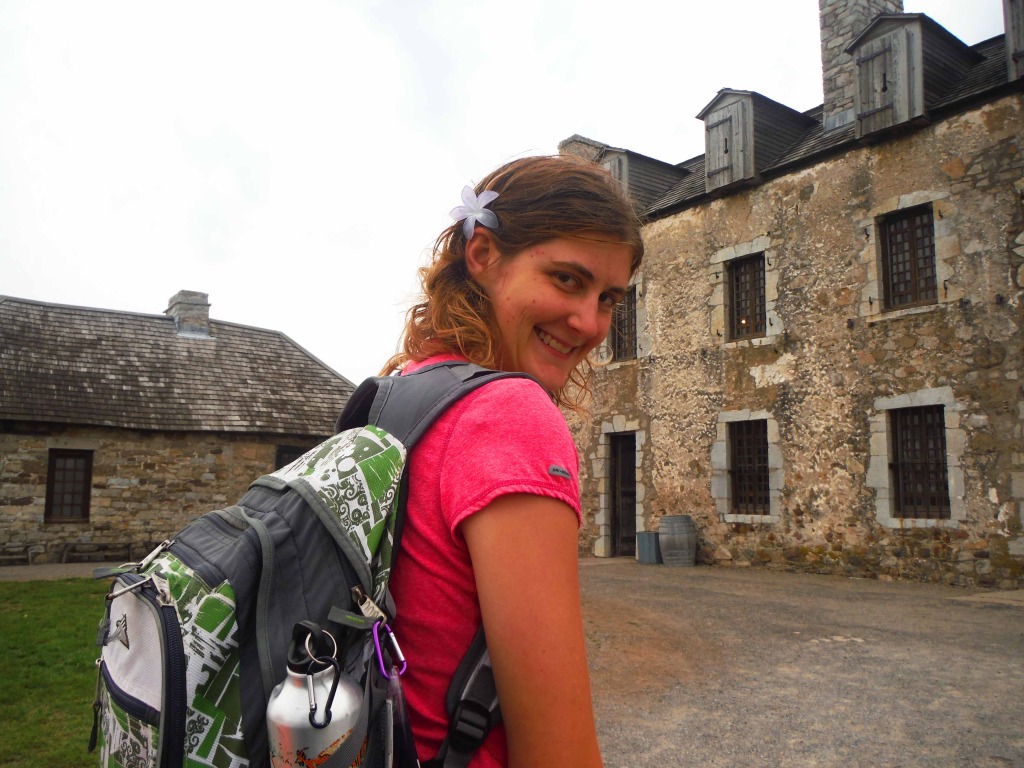 Jessica Lippe is a writer who longs to turn everything into an adventure. After exploring the Americas for several years, she’s about to embark on a journey that will lead her to Europe, Asia, and eventually the rest of the world! While at home Jessica works with teen moms, volunteers with foster children, and, like most twentysomethings, can spend hours on end between Pinterest and Netflix. She has had about 150 of her articles published, but currently one of her favorite places to write is on her own website, JessicaLippe.com.

Where to Stay in Niagara Falls