Big Thrills in Las Vegas on the Stratosphere Tower SkyJump

The bright lights of the Las Vegas Strip stretch out before me, their neon orbs breaking up the black of the night sky and casting an ember glow over a strand of buildings – sleek black, twisted silver, and in the vast distance the castle of Excalibur –each unique in its own right.

On my most recent visit to Las Vegas I was in search of some big thrills. Standing atop the Stratosphere Tower suited up to jump into the landscape before me, I realized I may be in for more than I had bargained for. 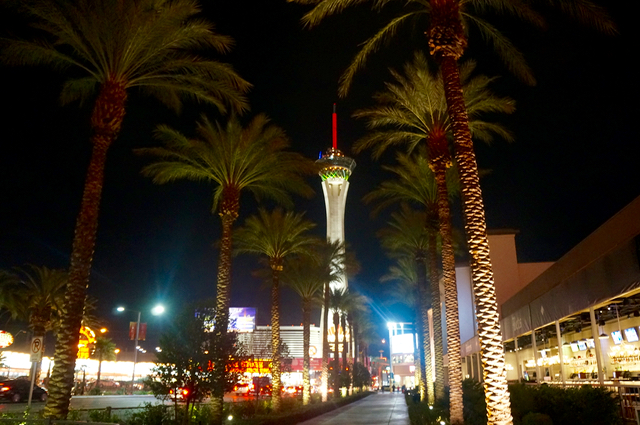 Dominating the world-famous Vegas skyline, the Stratosphere Tower is tall. In fact, at 1,149 feet it is the tallest freestanding observation tower in the United States, coming in second in the Western Hemisphere only to the CN Tower in Toronto.

The Stratosphere Tower SkyJump experience is an open-air leap from the 108th floor of the tower, or 829 feet above the strip. It’s the highest commercial decelerator descent in the world. That’s to say, it’s not a bungee-jump per say, but rather a controlled decent reaching speeds of 40 miles per hour. 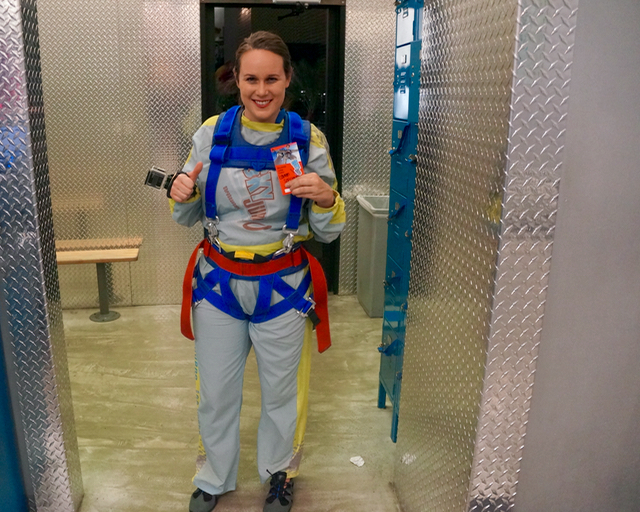 After dressing in a jump suit that made me feel I was fit to be in a circus, I took the elevator up to floor 108 and prepared for my jump. The staff was professional and thorough, triple checking all my gear and making sure I understood the process. At heights like this I really appreciated the extra mile the staff went to make me feel safe.

“Viva Las Vegas!” I shouted as I walked along a metal platform and approached the tower’s edge.

“Wow, this is kind of scary isn’t it,” I said aloud as I looked down to discover just how tall 829 feet is.

Filled with a fear larger than I’ve felt atop any diving board or waterfall in Costa Rica I took a pause and summoned the courage to step off of a building and into a night air.

And how was the decent? – Well, I’ll let the video below speak for itself, but truly if you’re looking for big thrills in Las Vegas, stick not to the Casino floor, but head up instead to the Stratosphere Tower Skyjump.

The Skyjump experience starts at $99.99 for hotel guests and $119.99 for non-guests. Jumps take place between 10 a.m. and 2 a.m. Photo and wrist cam packages are available for an up-charge. Book online here.

Note: I received a complimentary skyjump to review on Something In Her Ramblings, however all thoughts and opinions are my own.