The Case For Exploring European Cities By Bike

On a brisk wintry day I pedaled through dampness and pending darkness, racing against the clock, or rather the setting sun that hid behind thick clouds, to make it to my final stop of the day.

The hours of daylight are short in Copenhagen’s winter months, and with just a long weekend to explore Denmark’s capital city, I had been on a mission since morning, using the power of my legs and a bicycle to take in as many highlights as possible. I rode in a wide loop around the city, visiting my list of must-sees that included the Tivoli Gardens, Christainsborg Palace, the bohemian neighborhood of Christiana and Rosenborg Palace. 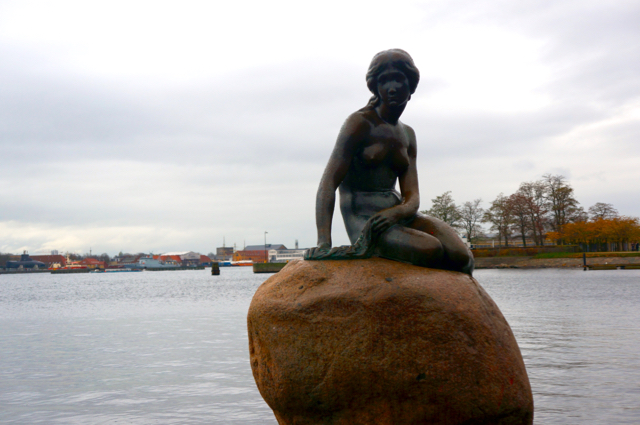 I rolled to my final stop in the Copenhagen harbor and looked out at The Little Mermaid sculpture, feeling the weight of the moment before the evening’s darkness set in.

For many visitors to Copenhagen, this statue, a gift from Danish brewer Carl Jacobsen to the city, is a bit of a disappointment. It’s smaller than many expect and often found on lists of the most overrated tourist attractions. But for me, a young backpacker who had spent so many years dreaming about visiting Europe, the Little Mermaid and her intense longing to be human had for so long mirrored the callings of my heart. 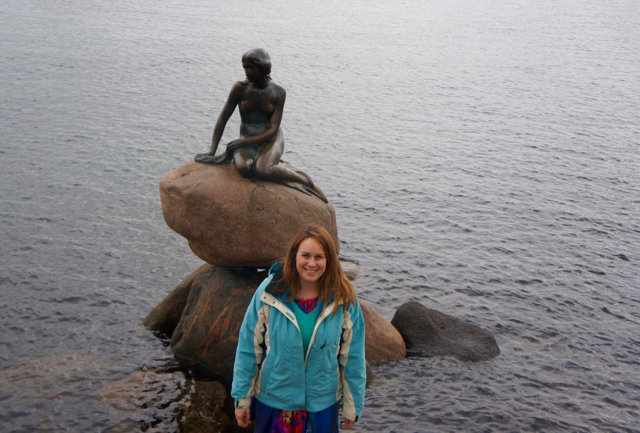 Like the Little Mermaid’s quest for legs, I always like to think of travel as more about the journey rather than the destination. As I discovered on this day in Denmark, using a bicycle as your means of transport is a great way to efficiently, thoroughly and enjoyably take in a destination. I’ve come to feel its truly one of the best ways to explore the great cities of Europe. Here’s my case for exploring European cities by bike.

There’s so much to see in the cities of Europe that time is always precious. For many backpackers in Europe who are trying to see as much as possible in a limited amount of time, that often means they will only get one or two days to explore a world renowned city. Looking back on the travels I took while living in Europe, there were times when I was lucky if I had six hours to explore the sights of a city before catching a train to my next destination. I even once visited three countries – Belgium, Luxembourg and the Netherlands in just one day!

With such a time crunch, renting a bicycle can be the most efficient form of transportation to explore the cities of Europe, especially those like Copenhagen, Salzburg or Nice that are more compact. Instead of taking time to navigate public transportation, you can go directly to the sights you want to see on a bike. Pedaling is also faster than walking, so you’ll save time that way also. 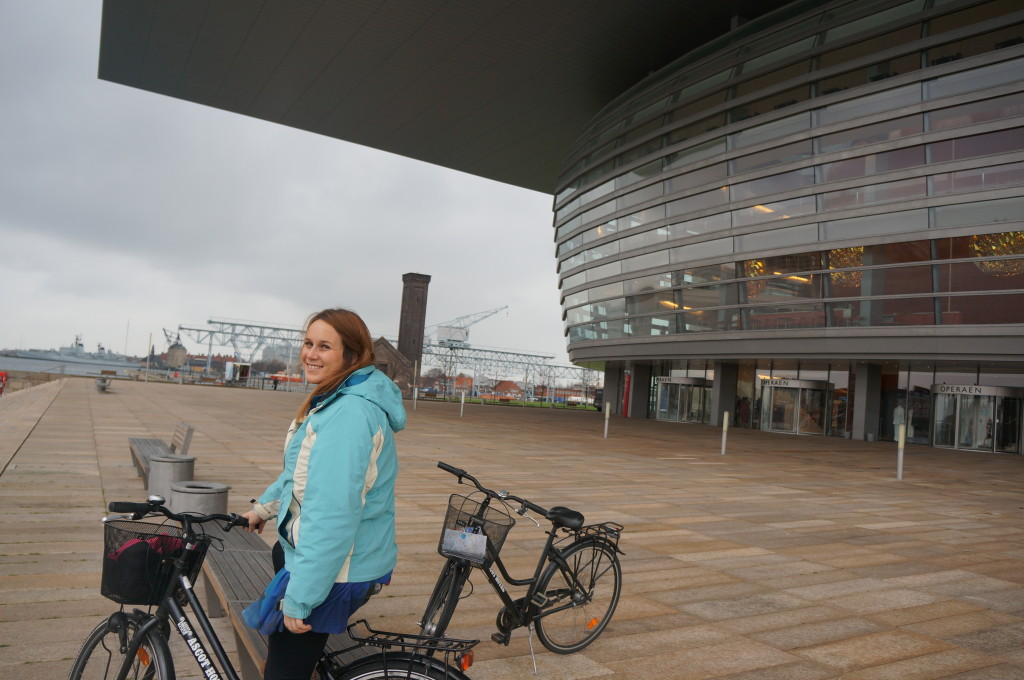 Freedom is an important feeling I search for in my travels. The ability to see what you want to see, when you want to see it is one of the greatest benefits of solo travel. I try to plan my trips to have as much freedom and control over my schedule as possible. After all, there’s nothing worse than being on a bus tour and having to leave an interesting museum early to get to the next scheduled stop (or likewise, spending an hour at a cathedral that is not of interest when there’s some place else you’d rather be).

Exploring the cities of Europe by bicycle allows you freedom to explore without worrying about missing the train or waiting for the metro. Renting a bike is also a much more cost effective option than renting a car, so you get freedom at a low price.

One of the best parts of cycling through Europe is that there is no traffic making it the fastest mode of transportation across the city during rush hour, meaning you don’t have to plan your sight seeing around traffic. You also do not have to worry about finding parking since you can park your bike pretty much anywhere. 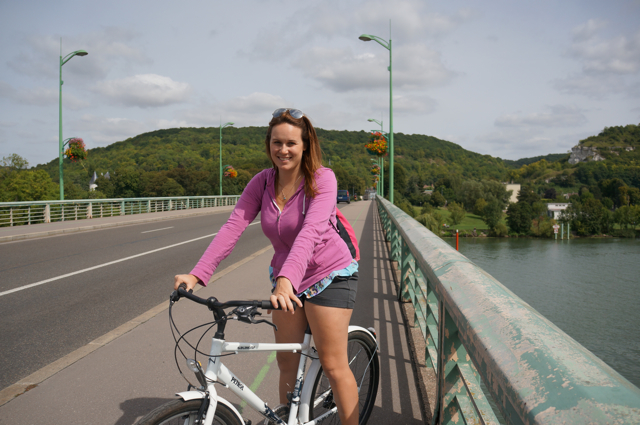 Slow Down and Speed Up

I’ll never forget the day I chose to cycle from the train station in Vernon, France to Monet’s house in Giverny. Bus transportation was available, but it was a beautiful summer day and I thought it would be more enjoyable to cycle. I pedaled along the Seine and rolled through the countryside. In a small village I heard music calling and stopped in at a local festival to enjoy an éclair while taking in a live band. Spontaneous moments like this don’t happen by bus or train.

Traveling by bike forces you to slow down so that you enjoy the landscape and can explore little shops and cafes that you might have missed if you were traveling on a bus (or completely missed when on an underground metro). This creates an opportunity for the concept of slow travel so you can really soak in everything the destination offers.

On the other hand, traveling by bike is much faster than walking, so you can speed up your transportation and see more than you would be able to see if you were exploring solely on foot. 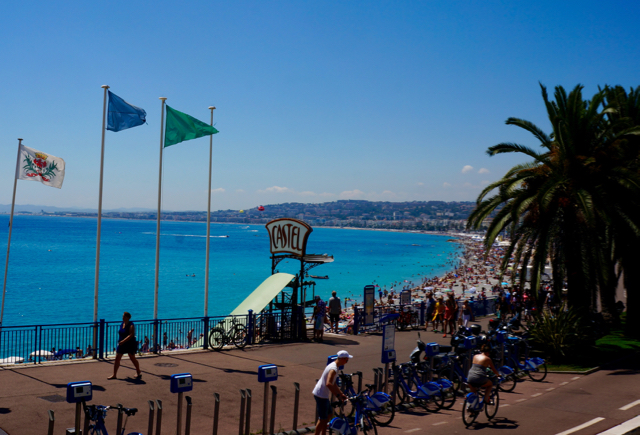 Fit in with the Locals

Unlike in the United States, cycling is a mode of daily transportation for lots of Europeans. This makes it easy to get around since many cities in Europe have a great biking infrastructure. Copenhagen, the most cycle friendly city in the world has bike paths that take you all over the city, through beautiful canals of the city’s centre and through mazy streets that you would most likely avoid if you were renting a car. Barcelona is known as the “darling of bike cities,” because of its flat terrain and nice weather. When you rent a bike in Barcelona, the terrain helps travelers experience as much of the city as possible.

Traveling by bike creates and authentic travel experience and is a great way to converse with locals since bikes are also a great conversation piece. I have struck up many conversations while locking up my bike in various cities around Europe. 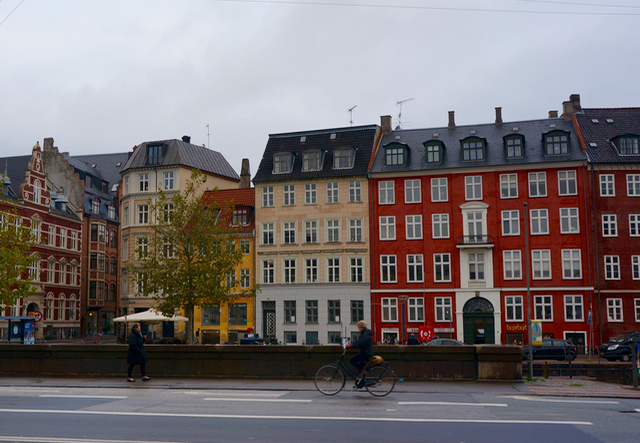 How to Explore Europe By Bike

While you may think renting a bike in each city you travel to in Europe may be tricky, Donkey Bike is making bike travel more convenient for the average backpacker. With 2,876 bikes to rent in 60 countries, this bike rental service makes it an easier and cheaper option compared to car rentals and public transportation 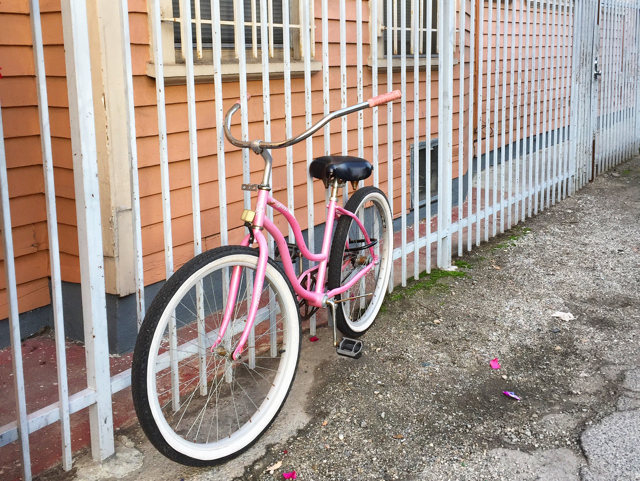 Donkey Republic is a Copenhagen-based company that has built a global self-serving, 24/7 bike rental service, which you can access via smart phone. The bikes include a smart bike lock that you can control with your phone making it easier than ever to rent a bike, whenever, wherever. There are no keys, no docking stations, no cash, no id cards, no deposits, and you wont have to worry about rental store hours and long lines, so you’ll be able to saddle up and begin your journey when you want, giving travelers the freedom to explore.

All Posts »
PrevPreviousMy Friend Francis, or a Tour of Port Moresby by Taxi
Next5 Reasons Why Sifnos Should Be On Your Greece Bucket ListNext