With warm temperatures, palm trees and plenty of beachy scenery, Costa Rica may not appear at first glance to be a place that gets wrapped up in winter holidays. But just because there’s no snow, Santa Clause or winter jackets to be found here doesn’t mean that Costa Rica is missing out on the Christmas spirit.

Costa Rica, already a vibrant nation, comes alive even more during the month of December in anticipation of Christmas, the country’s most widely celebrated holiday. If you’re wondering how they celebrate Christmas in North America’s deep south, here are five Costa Rican Christmas traditions to satisfy your curiosity.

How to Celebrate Christmas in Costa Rica During the month of December, the entire country of Costa Rica is seemingly swimming with Christmas trees. Every shopping mall, small town plaza and store has at least one of its own. Seriously, I think Costa Rica packs even more Christmas trees in that the United States. One of the most grand and important Christmas trees in Costa Rica sits in front of the Children’s National Hospital in San Jose, representing hope for the coming year and shining light to the children inside. 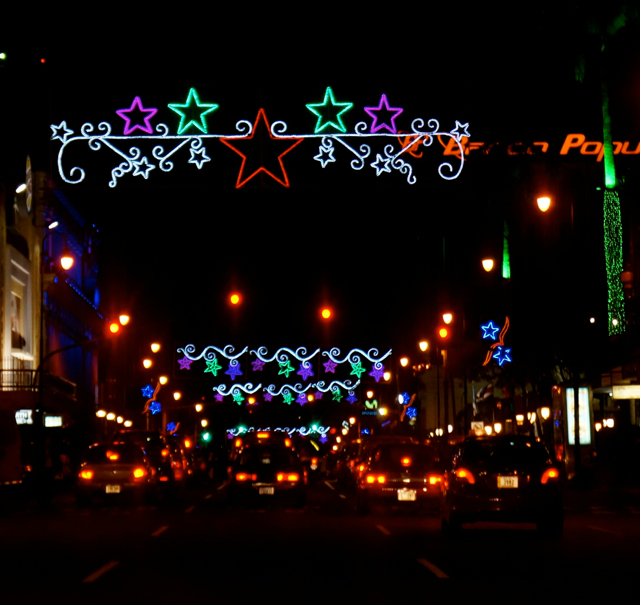 Come December, Costa Rica’s capital city is transformed into a winter wonderland. The streets are laced with lights depicting manager scenes, presents, Christmas trees and snowflakes, and the tropical trees around the city are illuminated with colorful lights.

During the holiday season, San Jose is also center-stage for Christmas related events including a parade, topes (horse shows) and The Nutcracker performed at the National Theatre of Costa Rica. The annual Festival de la Luz fills the streets with thousands. Being a primarily Catholic nation, Christmas traditions in Costa Rica are centered around the birth of Jesus Christ. Though less frequent than Christmas trees, nativity scenes, or portals are also found in abundance during the holiday season. Portals include a manger and statues of Mary, Joseph, barn animals, angels and the wisemen.

It is an important tradition for most families to assemble their portal together. On Christmas Eve, or Noche Buena, families place a statue of baby Jesus in the manger before going to a special mass.

In Costa Rica the baby Jesus, not Santa Clause, brings children gifts, and so it is an important tradition to place his statue within the portal prior going to mass so he is able to do so. Whereas in the United States many bake holiday cookies to share with families and friends, in Costa Rica, Christmas-time is all about tamales, a dish of seasoned meat rolled in cornmeal dough and wrapped in banana leaves.

Making tamales is quite a labor intensive process, so for those non-skilled in the kitchen like me, head to the grocery store for pre-made tamales or order the dish at a restaurant. It may seem strange that bullfights take place during Christmas time, but the Costa Rican version of this Spanish sport does not include killing the bulls. In Costa Rica, bullfights consist of bull riding, equestrian skills, live music, dancing and fireworks. Called Toros a la Tica, these events are family friendly and take place near San Jose in a community called Zapote.

And there you have it – five Christmas traditions to help you understand how to celebrate Christmas Costa Rican (or “tico”) style.

Where to Stay in Costa Rica

Find the best prices on accommodations world-wide with HotelsCombined. Find and book your Costa Rica hotels below!