Respect the Path: Lessons From The Ruins of Quitor in Chile 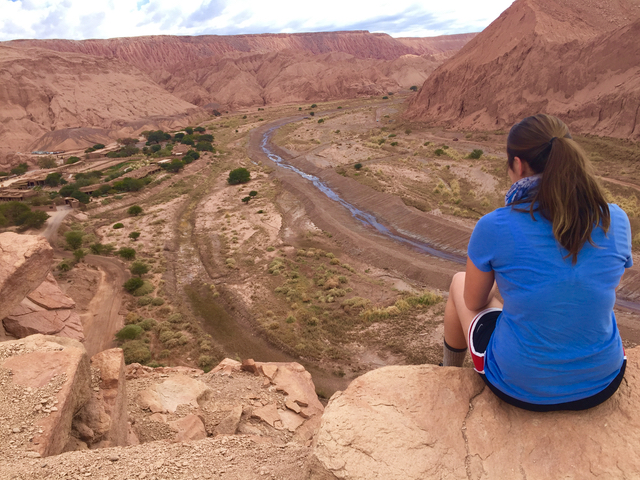 After a week of 3:30 a.m. wake ups and late nights during a whirlwind trip to South America I couldn’t summon the energy to rise again at this hour to do what most people do when they visit San Pedro de Atacama – take a sunrise tour of the El Tatio Geysers.

The dama who owns Hostal Candaleria, the B&B I am staying at in town, told me in Spanish upon checking in that, “if you don’t see the geysers during your visit it’s like you haven’t really been here.”

But her words couldn’t outstrengthen my exhaustion and so I spend my first of two mornings in the Atacama Desert sleeping in until the heavenly hour of 8 a.m. 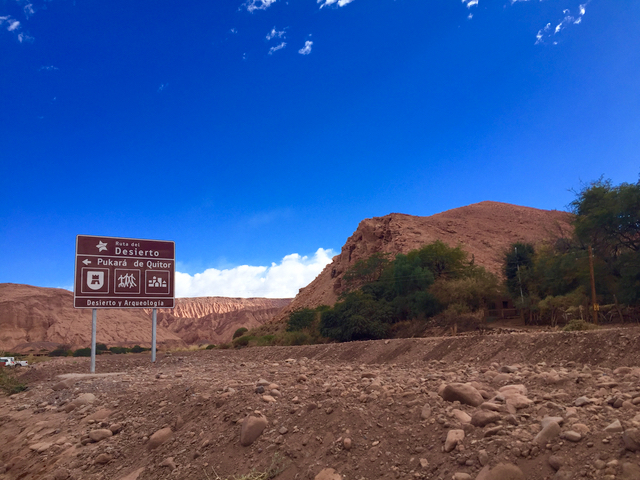 San Pedro de Atacama is described my many as the tourist center of Chile. The streets in the small town are lined with tour companies eagerly waiting to take visitors into the vast desert to explore otherworldly landscapes. These tours leave at set times – 4 a.m., 6:30 a.m. or 3 p.m., so for those who need to sleep in like me, there are limited ways to pass the time until the afternoon.

Left alone with a morning and just my own two feet, I spend the morning and afternoon hiking to the nearby ruins of Quitor, a six-kilometer round trip hike from the town center.

The hike is long and takes several hours, but on the hike I find myself mostly alone – something that isn’t possible on the group tours so heavily promoted in town. I come to feel that to be truly alone in the desert – away from the swirls of laughter and conversation that come with groups, focusing solely on the beauty that abounds– is the way nature must have intended itself to be experienced. 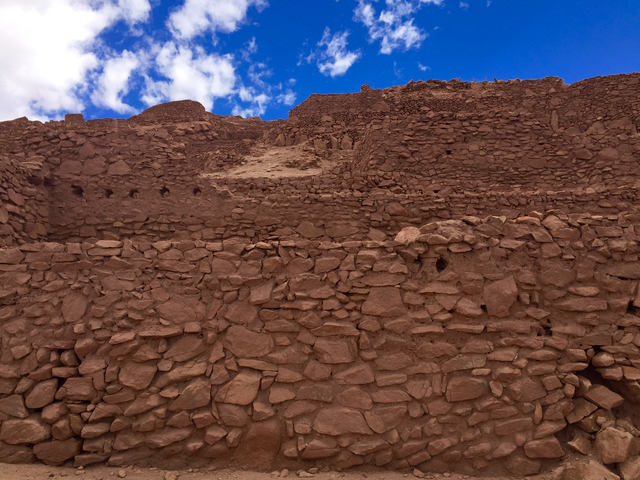 Quitor is “the entry to our ancient culture,” reads a brochure that is handed to me at the park’s entrance.

“Don’t throw this away – you must keep it as a souvenir,” insists the park employee who hands it to me before moving over to a map to explain the ruins to me.

Pukará de Quitor is a pre-Columbian settlement that dates back to 900 A.C. The stone fortress housed 500 atacameño people until 1540 when it was taken over by the Spaniards. 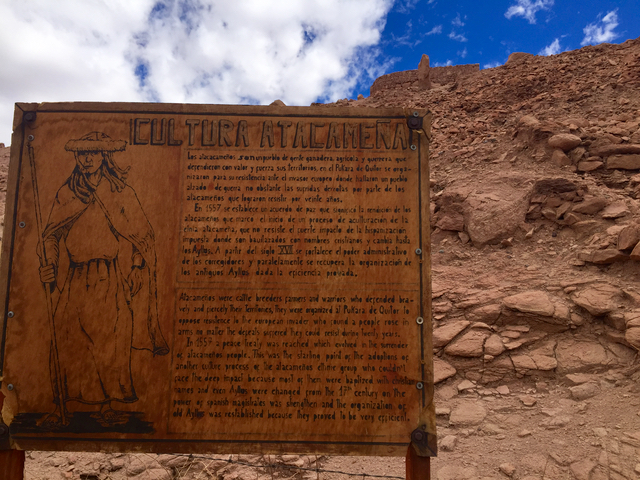 No one’s ever heard of the atacameño people, or at least I haven’t. Without the weight of a more well-known name such as Inca or Maya history has largely forgot about these people who once ruled the desert lands.

That few have ever heard of the atacameño people makes me a little sad. I realize it will be the same for us, for me. The sands of time will eventually erase us all from memory after we die. 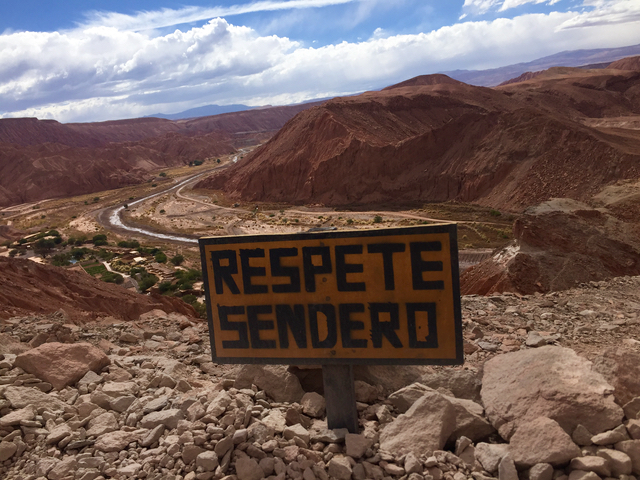 Respete Sendero and Respect the Path signs dot the trail as I climb the sloped hill that parallels the ancient city. To my left waves of scattered stones sit on terraces. To my right a vista unfolds of rocky hills, rolling and orange. When I reach the ascent I’m enveloped by grand peaks and the brown San Pedro river snakes towards the town below.

I spend a few moments taking it all in and then climb back down, rocks slipping underfoot.

There are two ascents in Pukará de Quitor. The second leads to a higher mirador. I begin my second climb and stop at a shaded hut along the way to drink some water.

A park employee sits on the metal railing and stares at me.

“Are you Chilean,” he asks in Spanish.

“Oh wow,” I exclaim, looking out at the landscapes below. “What a beautiful place to be from. It’s marvelous here.”

“It used to be more marvelous,” he says, wistfully looking out at the distance. “It’s changed a lot.” 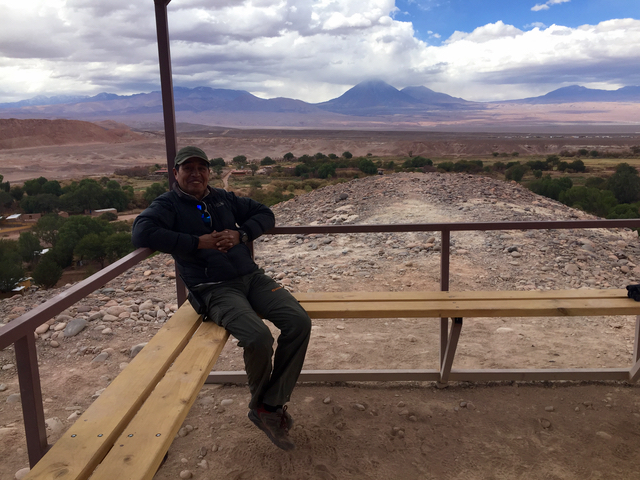 The man, named Luis Salva, tells me his story then.

He tells me how life in San Pedro de Atacama used to be so tranquil. He had horses and farmed sheep. He traded meat for fruit and other foods. There wasn’t a need for much money so he could make a living through bartering. In his free time he would ride horses out to thermal pools with his friends and go swimming. Above all, he stresses, life was tranquil.

Then about 15-20 years ago more and more tourists started coming here, from the United States, Japan and Australia, nationalities who almost never set foot here before. The colonial streets, once filled with houses of his friends, became lined with restaurants, hostels and tour operators who shout at visitors, seen as potential customers, as they walk down the streets.

There’s no more sheep in town or horses, except for the ones tourists can ride. There’s no more bartering either and now there’s a great need for money, so he works at the park, no longer spending his days with the sheep. 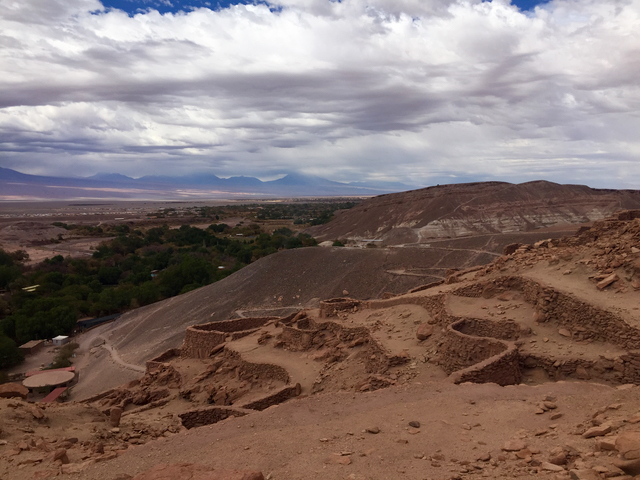 “This is modernization,” he says.

“Is it at least helping the economy,” I ask.

I ask this because this seems to be the argument people make these days about modernization– that the entire world deserves modernization. That losing what some locals like Luis have described to me as the happiness of tranquility is a fair price to pay because all people of the world deserve the benefits of modernization.

“It helps a little bit,” he says, nodding slowly. “But most of the workers in hotels and restaurants are foreigners who make very little money, eat and sleep for free, save that money and then leave the country to go back to their families. The younger ones use the money to travel.”

This story fits what I’ve seen in town. My waiter the night before moved here a week ago from Santiago to save money and travel.

“That’s so exciting, “ I said, relating to his thirst and wanderlust. “Where will you go?”

Luis looks off further in the distance and continues his story.

“Recently they are building new resorts – five stars. The people who stay there have private everything – food, guides, horses. They don’t ever even touch the community.”

He looks back at me and I feel incredibly guilty for being one of these tourists, my very presence before him now changing his land.

“And I can’t go to the thermal pools anymore without paying since they are now part of parks,” he says. “And they are always crowded with tourists.” 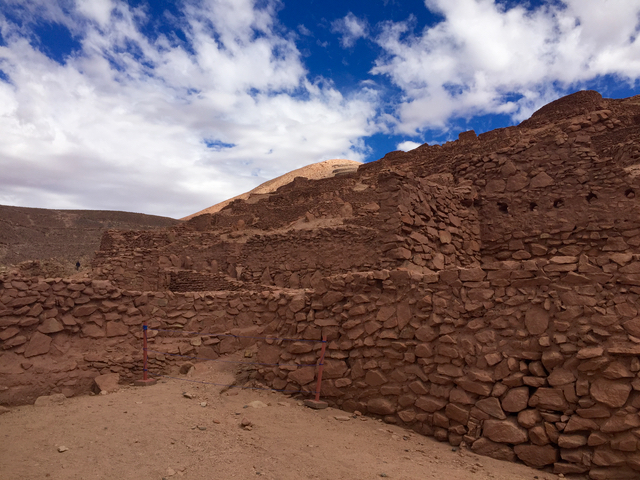 I don’t quite know what to do with all he has told me, but it is too important not to share. I ask if I can take his picture and tell his story.

“Indigenous people believe a photo steals the soul,” he says, quite serious.

Luis is a mestizo. There are no pure blood natives left in Atacama.

Before I can apologize he gives a little laugh.

I take a snap and he says to remember that there are both good and bad sides of modernization.

“Keep climbing now,” he motions with enthusiasm. “Enjoy the view.” 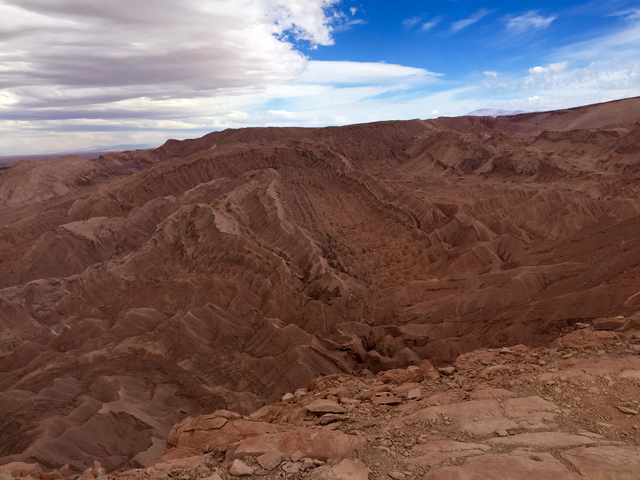 I keep climbing and I enjoy the view. I pass through a stone archway through a panorama of craggy brown lands illuminated by the brilliant blue sky.

At the very top of the hill there’s a monument four yellow crosses. Each one is inscribed with the words “My God. My God. Why have you abandoned me” in different languages – Spanish Portuguese and two others I can’t identify. 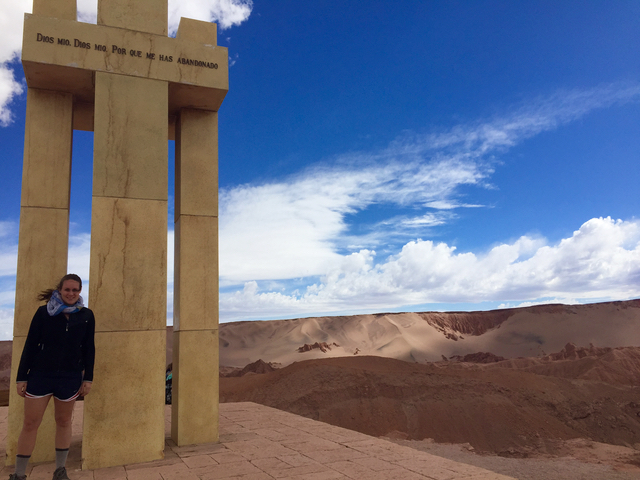 This is what Jesus said as he lay dying on the cross and it strikes me as a really odd quote to have up here. This is a monument to the atacameños, people who weren’t Christian until they were conquered by the Spanish. I also can’t imagine any person looking out at this view and thinking God has forsaken them.

I stand pondering the placement of this quote when a Christian Australian who I met earlier on the path approaches me. I ask him what he thinks of this scripture.

He says in many words that I will summarize here that he thinks the use of this scripture is ironic. Jesus said these words knowing that this was his path. Those who know the story of Jesus know that God did not forsake Jesus, but Jesus did have to feel the deep pain of a slow death on the cross to get to the Glory of Heaven. 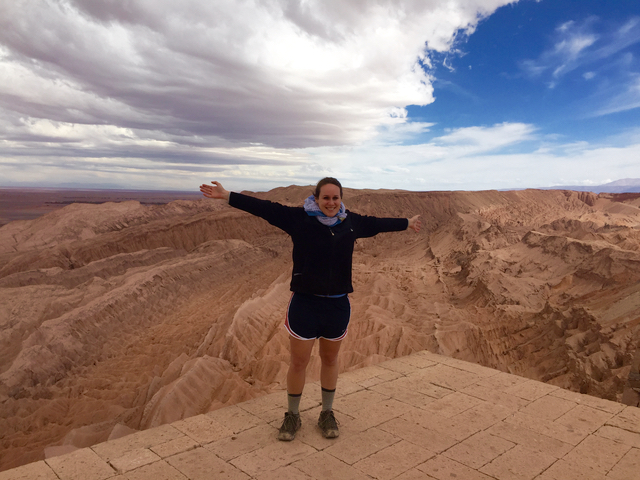 I look out at the landscapes and know that a force far greater than myself has lead me here. I think about all the times I have felt forsaken by the universe and realize they have all been part of a path that have lead me to places of glory like this one.

Respecte Sendero. Respect the Path. I must respect the path.