Visit the Andes in Chile with AndoAndes

Baby I would climb the Andes solely to count the freckles on your body.

Standing atop a narrow, concrete pylon, look out across the El Yeso Reservoir, Shakira’s lyrics blast through my mind, their invisible sound the only interruption to the unceasing panorama before me. The water is a brilliant shade of blue I’ve never quite seen before and here lay the Andes in all their magnificent glory, faint drippings of snow still dotting the peaks at the end of the Chile’s summer.

There are moments in my travels, or my pursuit of traveling, when I sometimes wonder if all the effort (and money) is worth it. And then there are moments like this one, when the magic of being in such a beautiful place washes over me and fills my soul up with life and I am reminded of why I travel. 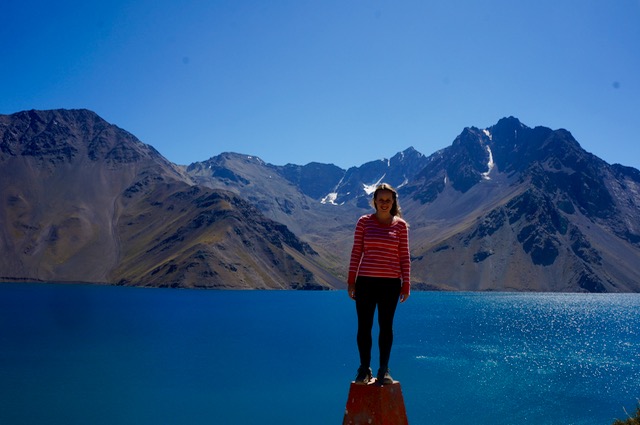 The Andes Mountain range runs 4,500 miles from Venezuela to Argentina and is the longest continental mountain range in the world.

From Santiago, Chile’s capital city, you can see the Andes in the distance. However, despite their proximity, the mountains are difficult to reach. There’s no public transportation to the Andes in Chile, so unless you want to invest in renting a car and brave the back roads, going on a day tour is the way to go.

I accompanied AndoAndes, a green tour operator that offers authentic experiences in the region, on their Andes day lagoon tour. The eight hour tour takes visitors deep into the mountain range to experience the El Yeso Reservoir and historical landmarks in Cajón del Maipo. 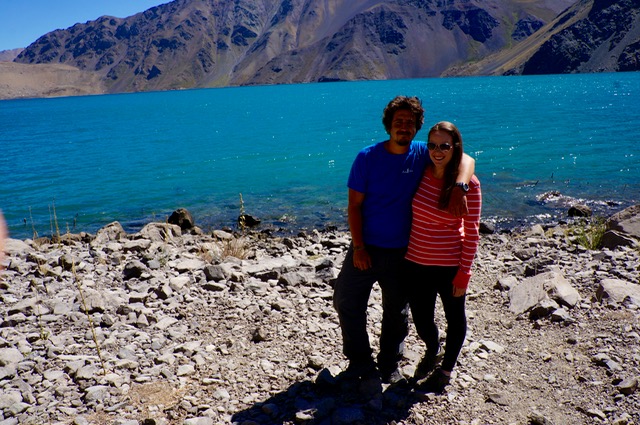 Our tour begins in the early morning. Gonzalo, our cheery tour guide, greets our group of 13 in downtown Santiago and we pile into a mini van to begin a day of adventures. Away from the urban landscape we drive, passing through the pre-Andes. As often is the case in Santiago the morning is hazy. The city is surrounded to both the East and the West by mountains, and with little wind to move the pollution away, much of it stays in the city.

Our first stop of the day is in San Jose de Maipo, a small town with historical roots. Here we walk the plaza with Gonzalo who points out trees that are native to Chile and species that were imported by the Spanish. We are then given time to stroll around the city on our own and contemplate what life must have been like for those who settled the town many years ago. 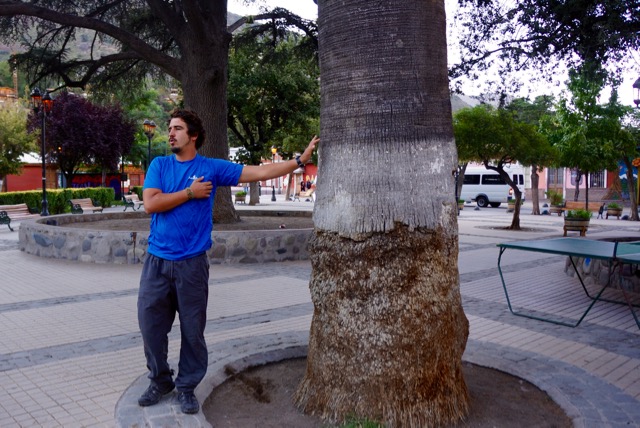 As we continue on the air gets drier and thinner and the landscape more arid. We stop again near a tunnel and Gonzalo instructs us to brave our fears and walk through the pitch black passage. 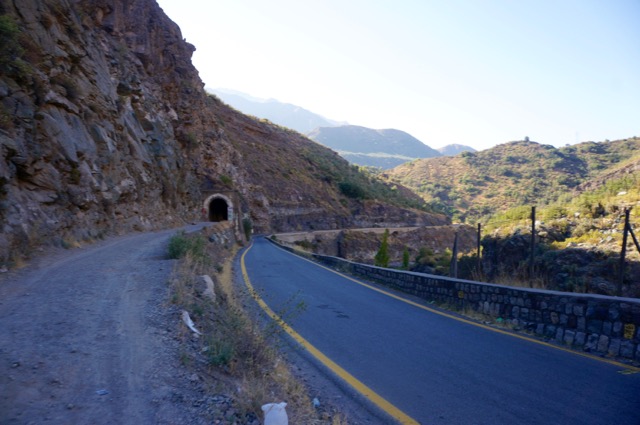 “Don’t worry, it’s a touristic tunnel,” Gonzalo says. “There’s no holes, rats or men with guns waiting for you.”

This is the kind of statement that separates the United States from Latin America, that makes you realize not everyone comes from a place where such a tunnel would be safe. But here in Chile it is safe, and I walk through the blackness to the other side where Gonzalo is waiting next to a small memorial. 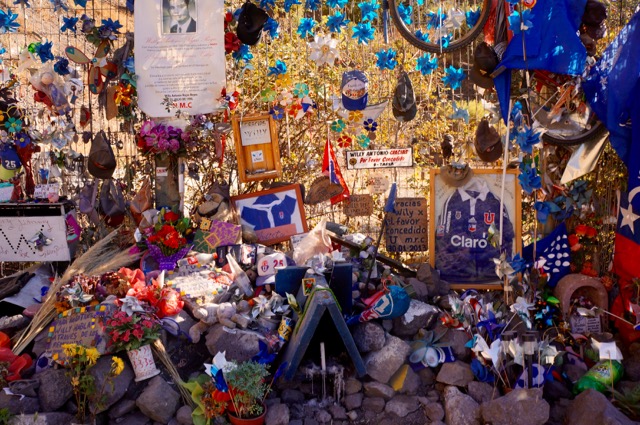 In 1998 a successful university student named Willy tragically took his life in this tunnel. Ghost hunter television programs have come to film shows here and the memorial remains, a testament to the impact Willy had during his life. The memorial is scattered with pin wheels which spin in the slight breeze. This is how his parents say they can still speak to him — through the wind.

On a somber note we head deeper into the mountains and stop next to a waterfall. Gonzalo says we can drink the pure water and I fill my bottle up before climbing to the waterfall’s top to check out the vantage point. Apart from our group there are no other humans in sight and the mountains stretch all around us. 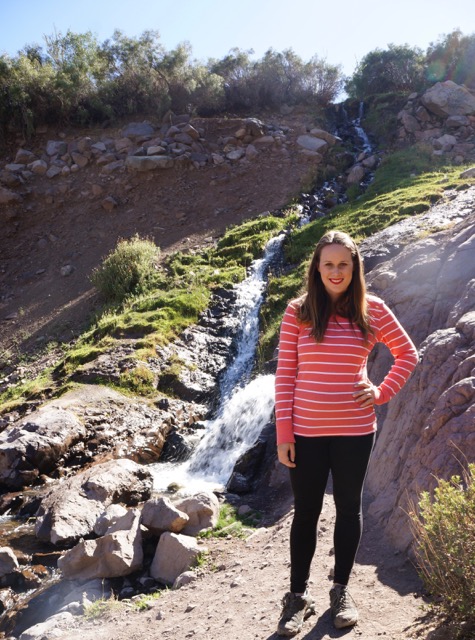 We drive on then, and on and on we wind through the mountains until we turn a corner and the jewel tone hues of the El Yeso Reservoir sparkle before us. We stop for a much coveted photo opportunity. In winter the water will be frozen and the mountains covered in snow. But today, on one of the last official days of summer the air is comfortable and crisp. 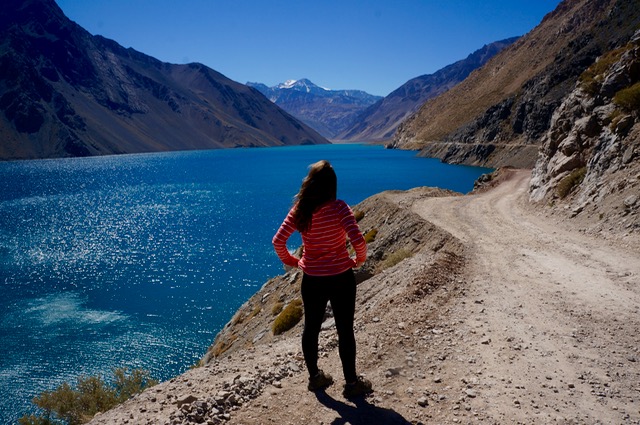 We make our final stop of the day on the farther side of El Yeso. Selecting rocks for seats we sit and enjoy a bagel with chicken and vegetables for a picnic lunch. The duos and trios of travelers in our group huddle mostly amongst themselves, no one wanting to disturb the peace of anyone else. 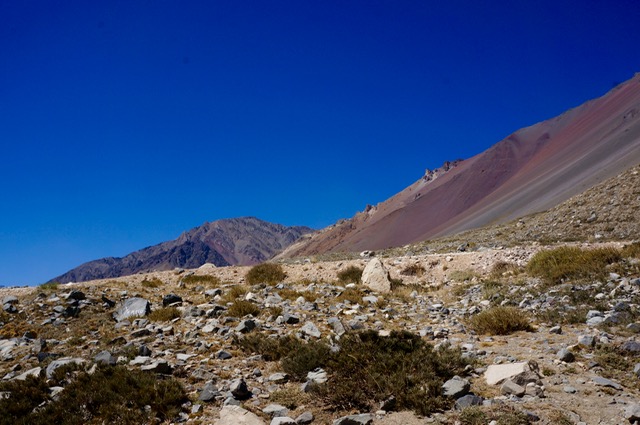 But then Gonzalo opens a bottle of wine from the region and, after a glass or two, we all begin to open up. Brazilians, Australians, Mexicans, Chileans and me, the lone American, swapping stories from home and tales of misguided travels. The tone of our stories fluctuate from serious — the economy in Brazil has just collapsed and for goodness sake Donald Trump is the front runner in the Republican party in my country — to humorous — the Australians have a knack for making even a mundane lost luggage situation a belly shaking adventure. 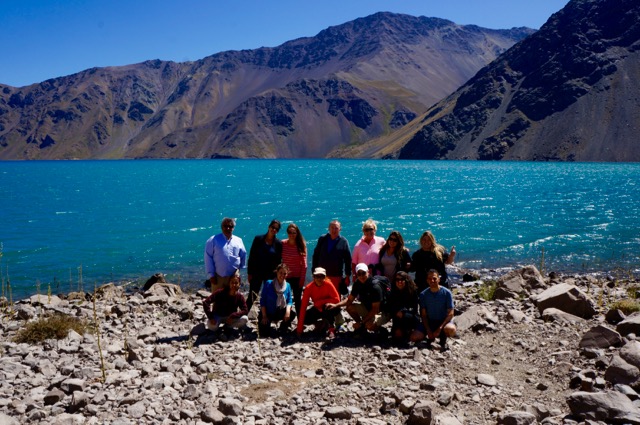 Our conversation is interrupted every so often by sighs of wonder about the scene before us, made ever more magnificent by the wine, and laughter, pretty much any time one of the Australians speak. As I stand looking out at the Andes with a glass of wine in hand, doubling over in laughter, it dawns on me that the only thing more beautiful than the juxtaposition of the lake and mountains is the melody of such diverse and global voices united in laughter.

Note: I was provided with a complimentary day tour with AndoAndes. However, all thoughts and opinions are my own.

All Posts »
PrevPreviousA Step Inside Alma Hostel in Santiago, Chile
NextConquering the Concrete Jungle of Los Angeles in the Mazda CX-5Next