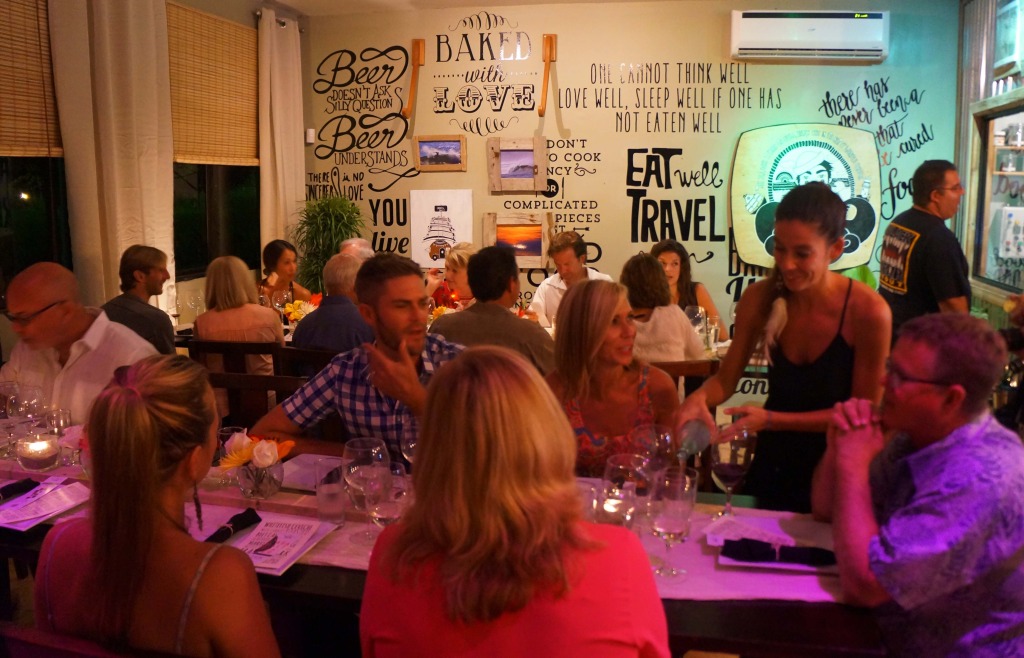 This Valentine’s Day there was a lot more than love flowing at Side Street Bistro near the shores of Playa Jacó, Costa Rica. By night, the trendy sandwich shop and bar was transformed into a puertas cerradas-style dining event where more than 20 guests enjoyed an evening of bold flavors, elegance and laughter.

The pop-up event featured Chef Dan Perlman, a former New York City-based chef, who has spent the past ten years cooking up new dishes in Argentina. His restaurant, Casa Saltshaker, is one of the leading puerta cerrada (closed door), restaurants in Buenos Aires, a city where not-so-secret, in-home dining experiences have become increasingly a la mode following the 2001 economic crash. 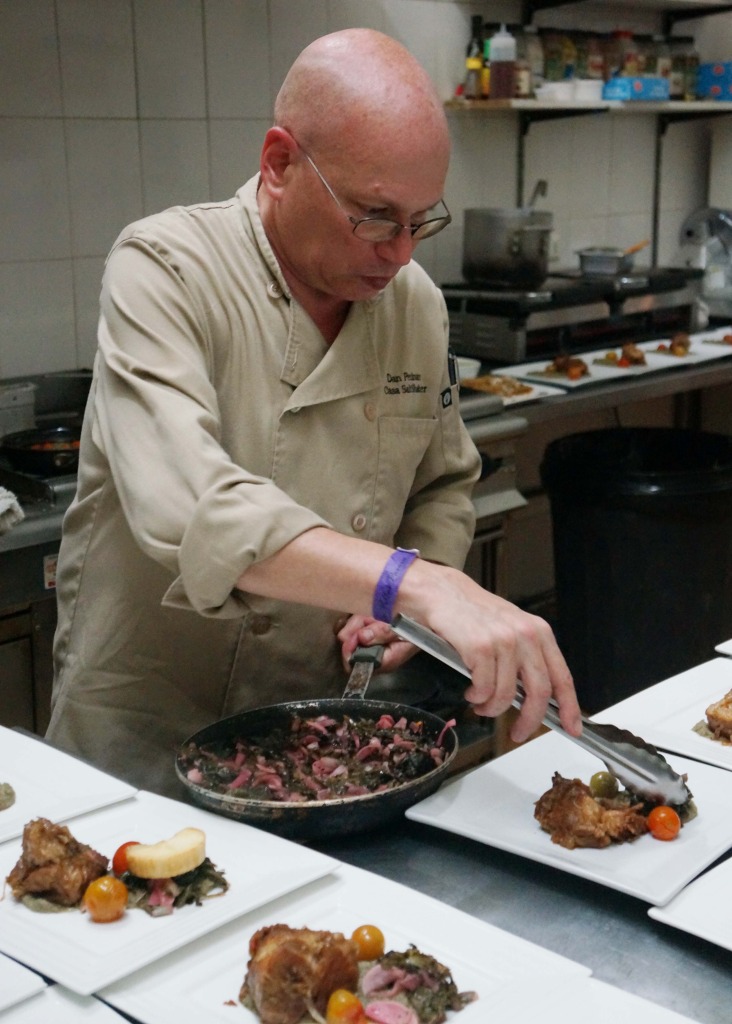 In a private dining room fittingly tucked quietly behind green doors, Chef Perlman served up a tasting menu of six courses with wine pairings. His Peruvian-inspired recipes were infused with Costa Rican traditions and prepared using all local ingredients.

To enhance the couture style of the dishes there was a final twist – the five savory courses were also prepared using the house pale ale that is brewed at Side Street Bistro. 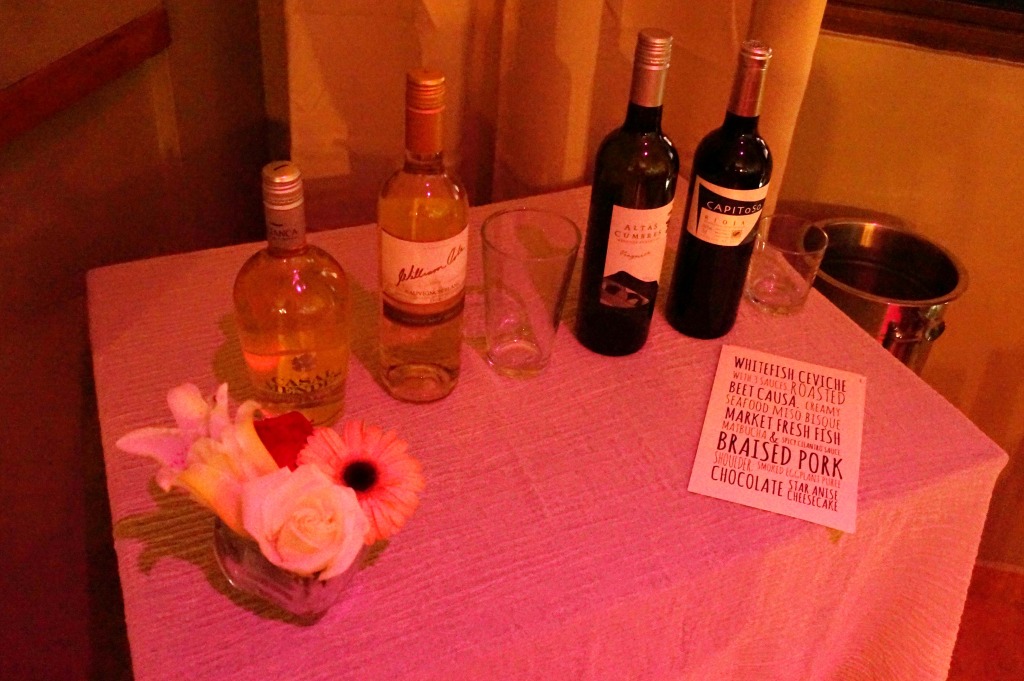 “This is an opportunity to do something new with cuisine that we don’t really have here in Costa Rica,” said Vivi Díaz, a Costa Rican chef who was in attendance.

“It is super exciting to have the experience of trying this chef’s food without going to Argentina, and to try unique dishes based on typical Costa Rican food but kicked up many, many notches,” she added. 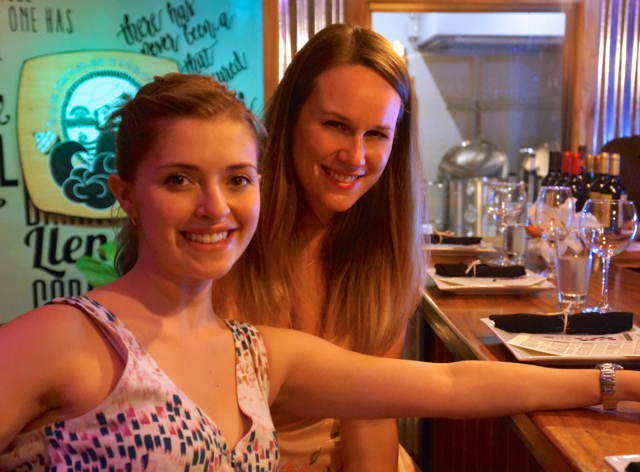 Indeed, with dishes such as fresh caught snook (one of the most common fish found in Costa Rica), layered with stoneground mustard, portobello purée, matbucha, and bread crumbs served over green beans and cilantro sauce (cilantro is a long-time local staple ingredient), the event was a rare opportunity to witness – and taste – the birth of a truly unique fusion of cuisines. In a country where the national food identity is on the verge of modernizing, Chef Perlman’s dishes felt like the beginning of what will be a renaissance, and perhaps the future, of Costa Rican fine dining cuisine.

The pop-up event was a collaborative effort between Chef Perlman, Danny and Katie Clark, the owners of Side Street Bistro and Graffiti in Jacó, and Jon Hochstat, a chef turned hospitality consultant who dreamed up the idea for such an event two years ago. 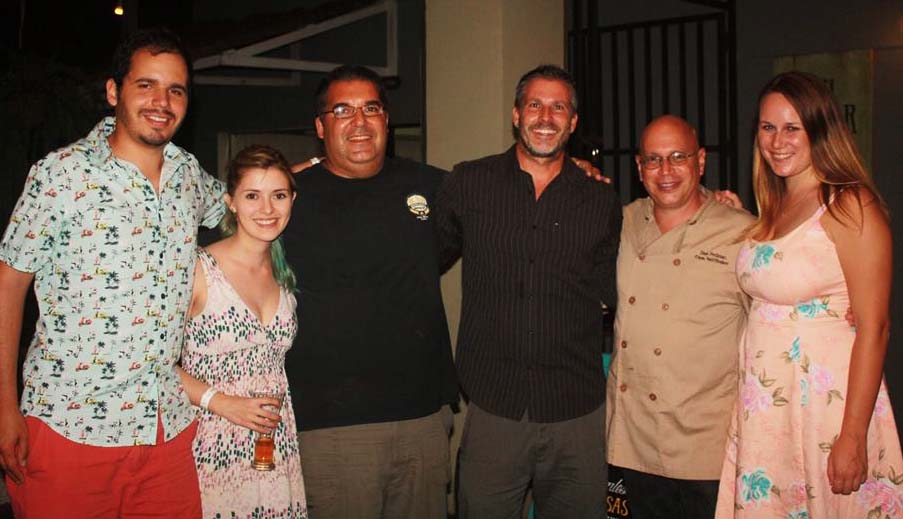 “My goal for the last two years was for this night to happen,” said Jon. “This went from a dream, to adrenaline, to tonight. It’s the right idea with the right people at the right time.”

Danny and Katie Clark provided the perfect atmosphere for the clandestine dining experience, arranging the room at Side Street Bistro in a manner that was at once homey and elegant  with low lighting, long tables and Valentine’s Day themed florals, and welcoming guests with the same casual inviting air that is synonymous with Costa Rica and “pura vida.” 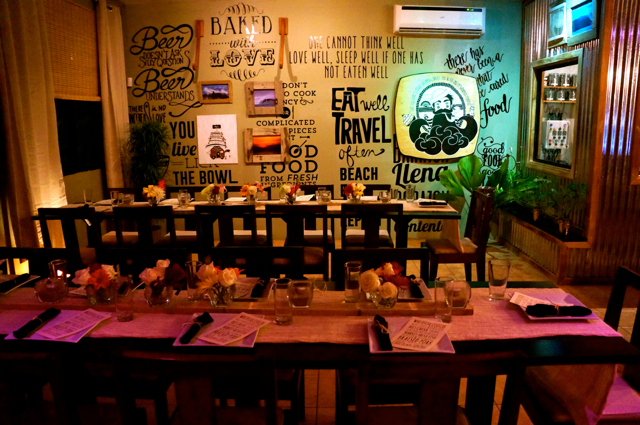 For Danny, the event’s tasting menu concept was an especially appealing reason to host the event.

“The beauty of a menu like this is that you don’t have to eat all of it,” he said. “You eat what you want, drink your wine and wait for the next course. You aren’t going to go away hungry.” 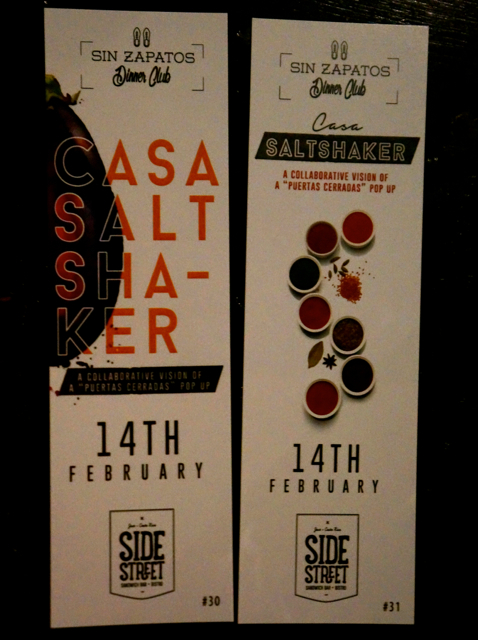 As the evening came to a close, three things were for certain –no one left hungry or without a smile, and Casa Saltshaker didn’t just pop-up in Playa Jacó – it stood up with one swift and powerful motion, and rode all the way to shore. Feast  your eyes on the complete menu below. 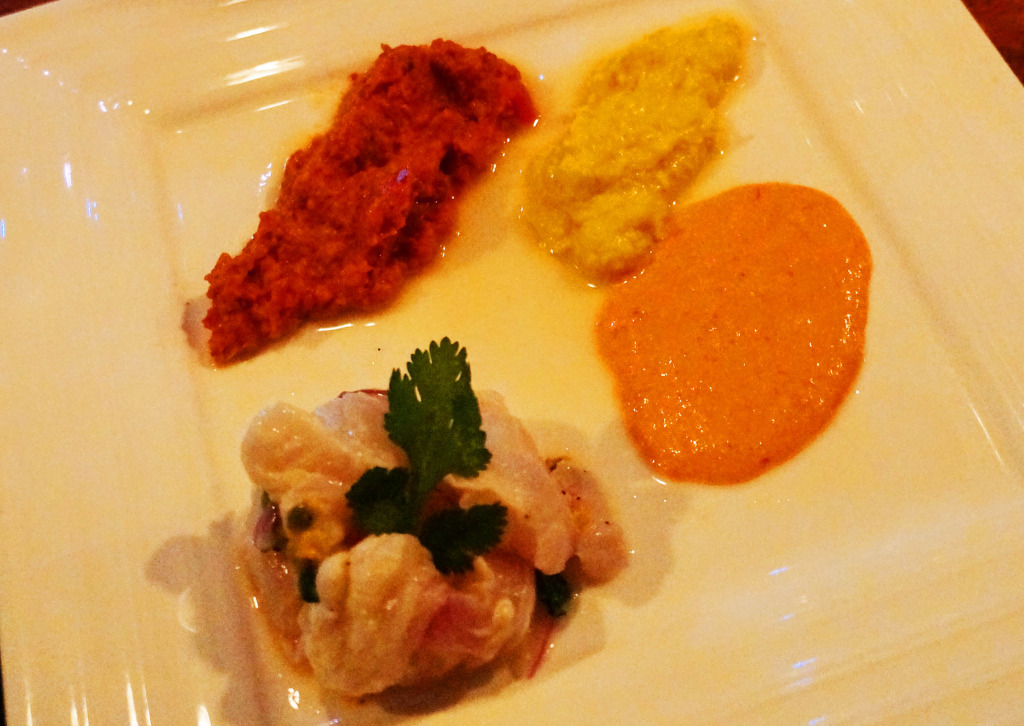 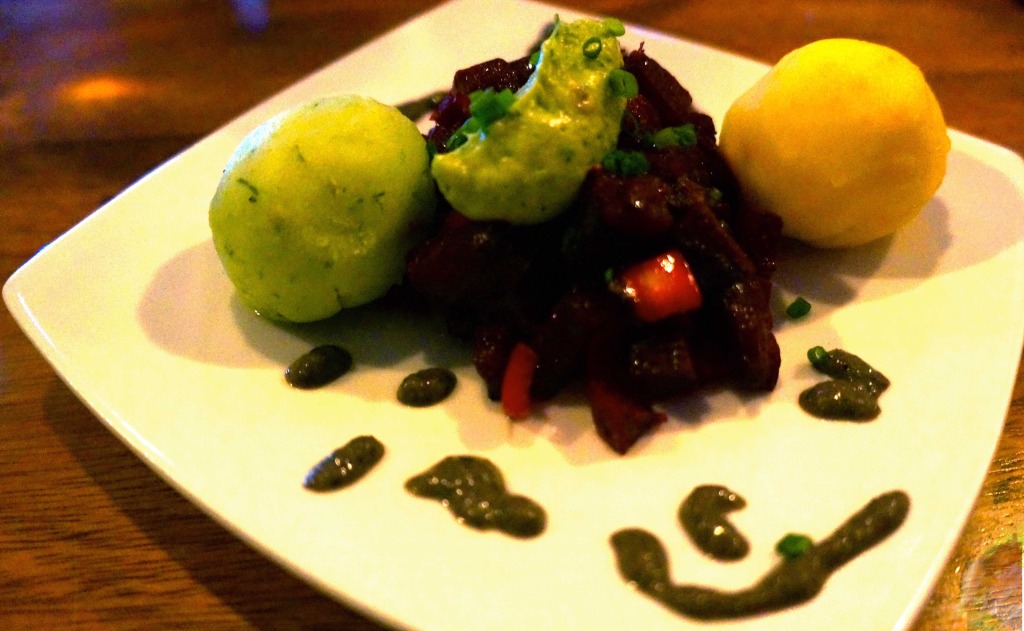 *This dish was served in the form of a vegetarian causa, a Peruvian dish similar to shepherd’s pie that is usually filled with shrimp, octopus or chicken. 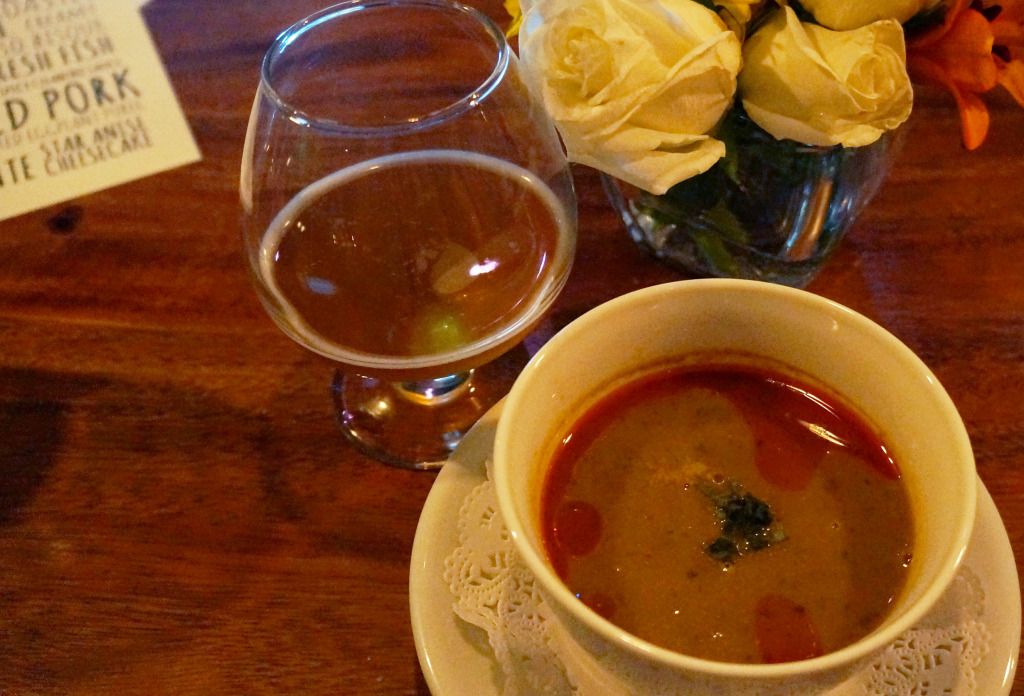 Wine pairing: Forget wine! This dish was served with a glass of Sailor’s Bounty, the flavorful pale ale that is brewed on-site at Side Street Bistro.

*Though Parihuela is a Peruvian dish, it is also a custom to have a bowl of seafood soup served with a bottle of beer in traditional Costa Rican Cantinas. 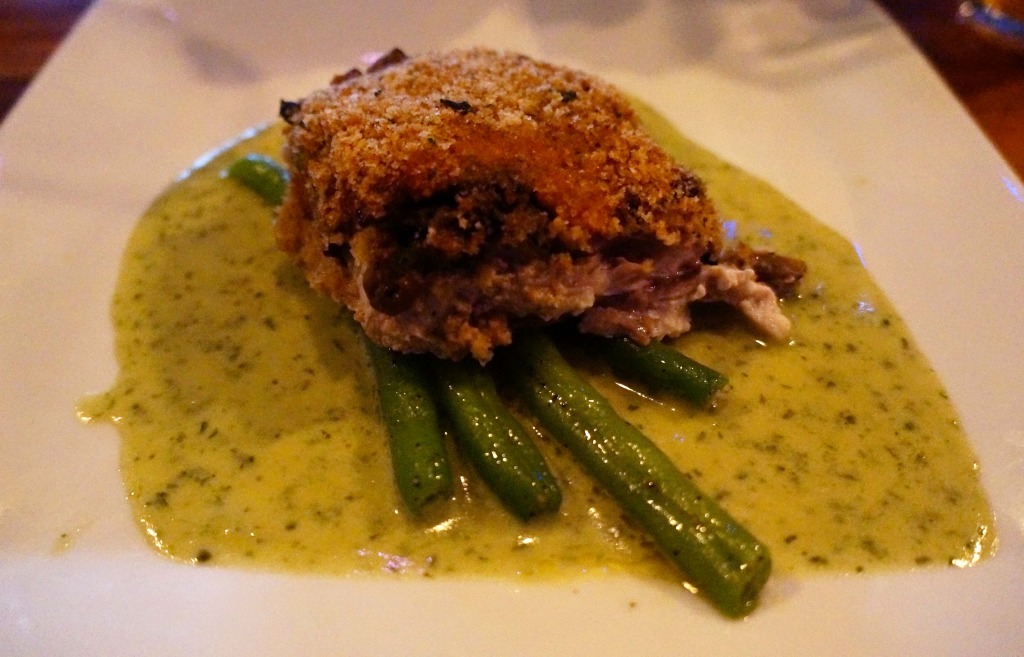 *Cilantro sauce is very typical in Costa Rican cuisine and snook is commonly found off the shores of the country’s Pacific Coast near Jacó. 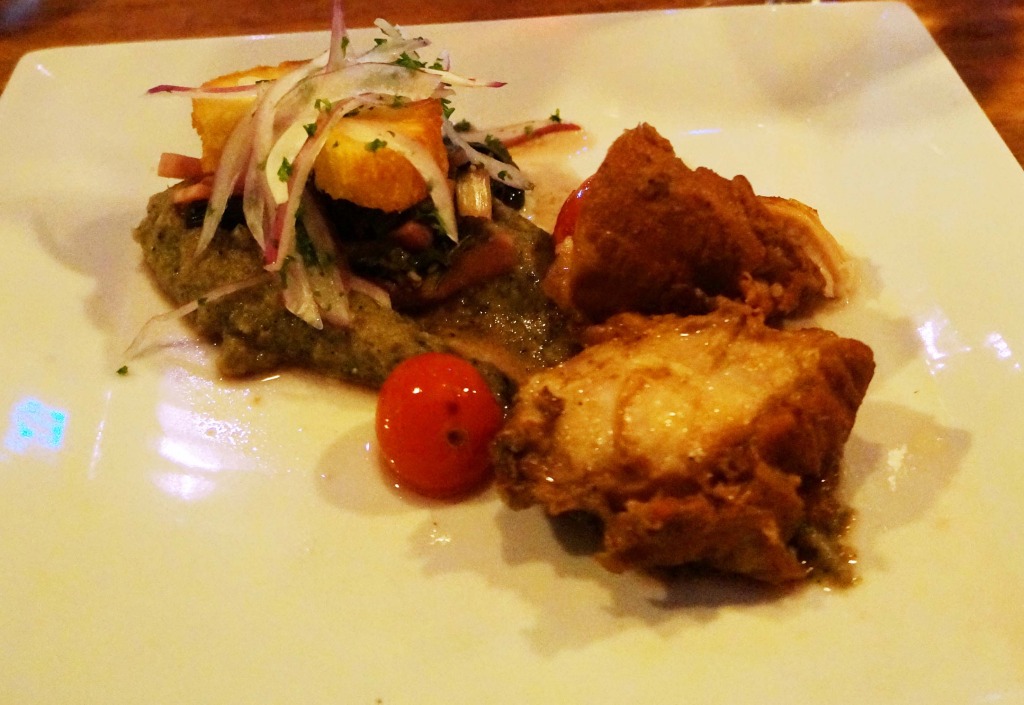 *Pork consumption is rising rapidly in Costa Rica and yucca has long been a staple ingredient in the Costa Rican diet. 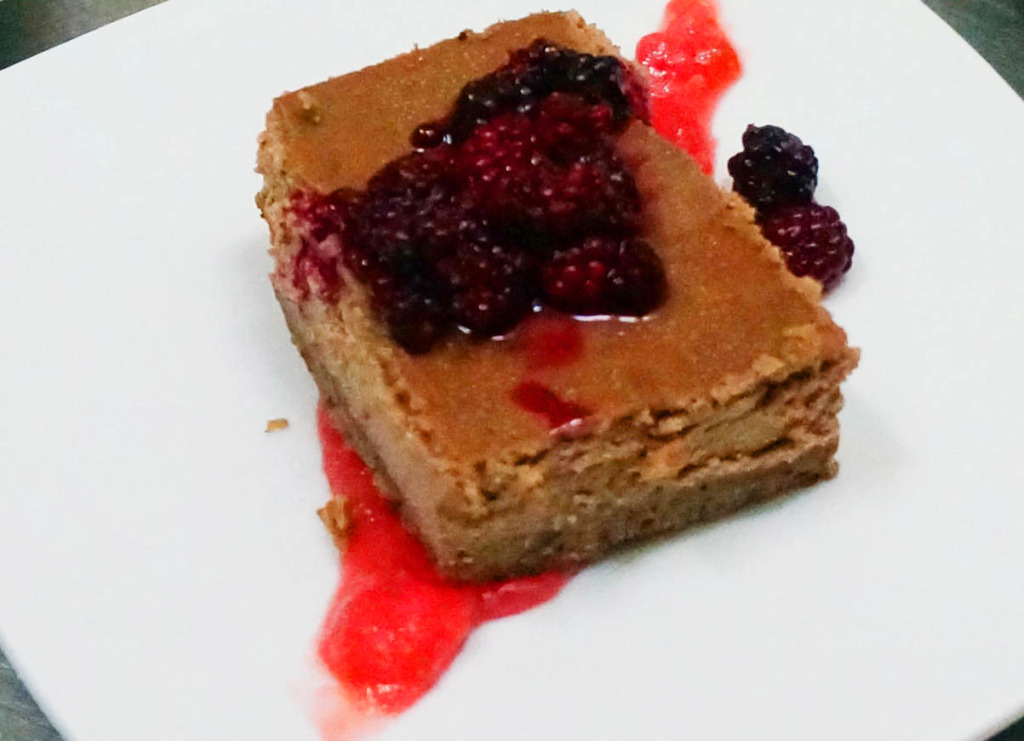 Wine pairing: Again, forget the wine. Dessert was served with a special drink made by Chef Perlman himself with espresso, red wine and orange peel.

Note: A special thanks to Chef Dan Perlman, Katie and Danny Clark and Jon Hochstat for inviting me to attend the Casa Saltshaker pop-up event and write about it on Something in Her Ramblings.