Van doors slam and six bodies dart over sand dunes and bushes, racing wildly to catch the last rays of the sinking sun before they disappear beneath rolling ocean waves. It is time to explore the cliffs of Lagos, Portugal. 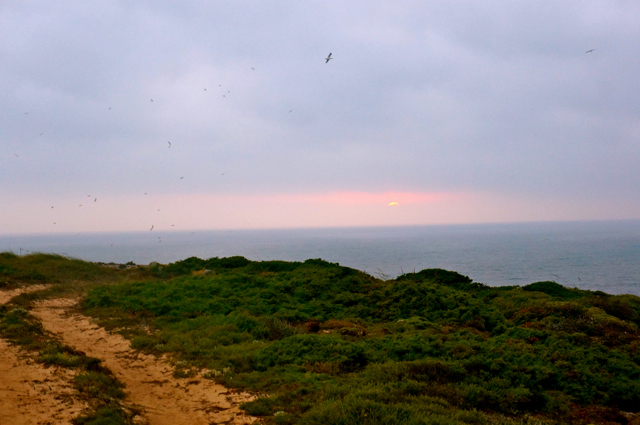 We reach the cliff’s edge, and all six of us – three Americans, a Canadian, Swede and an Englishman–are dizzy with laughter. Though we were strangers this morning, by nightfall we have become, if only for a few hours, a make-shift, rag-tag of a family, bonded by hours of cheering one another on and the intimacy of trying and succeeding at something new. 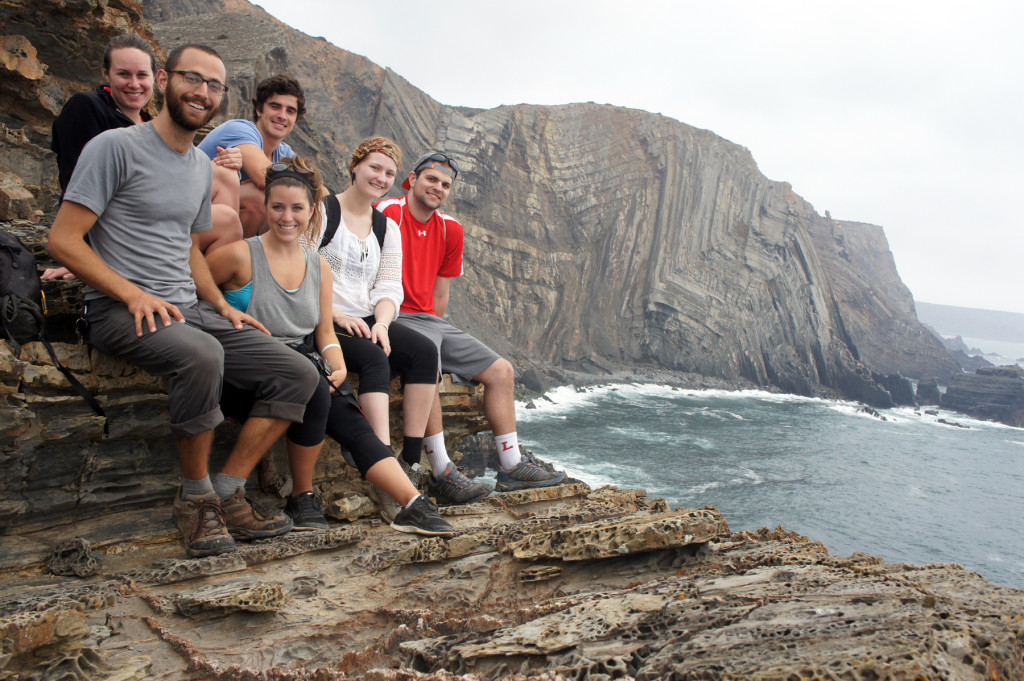 We sit at the End of the World.

Well, technically, we are at Cape St. Vincent, the southwestern most point in Portugal. Back when people believed the world was flat, these cliffs were considered to be the edge of the world. Sipping wine and snacking on cheese here is the finale of T.J. Eisenstein’s adventure tour to the cliffs of Western Portugal. 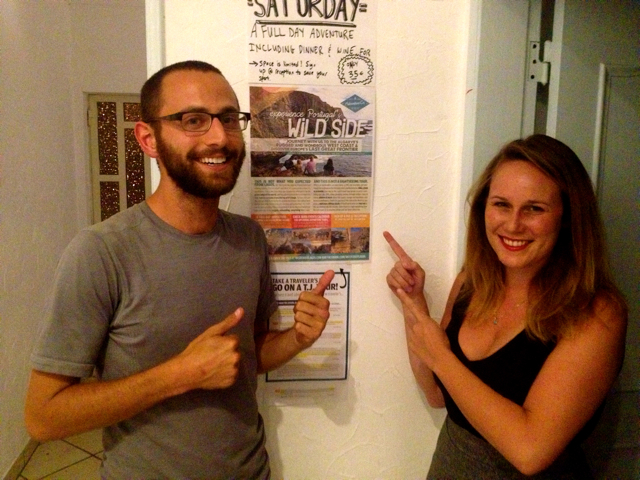 Exploring the Cliffs of Lagos, Portugal

T.J. met our group of adventure-thirsty backpackers around mid-day at Bura Surfhouse hostel in Lagos to drive and lead us through Vicentine Coast Natural Park. The inspiring 28-year-old recently moved to the country and founded the West Coast Adventure Co. to share his passion for Portugal’s rugged coastline with like-minded travelers. Though he owns and operates a Portuguese business, there’s no doubt T.J. is an American as he rattles off safety tips, regulations and environmental reminders in an opening speech quite obviously shaped by his years as a Boy Scout. Southern Portugal is famous for its stunning beaches and sea cliffs, and the west coast, largely unvisited by tourists, is, as T.J. describes, “the last undiscovered frontier.” Indeed, during our four-hour hike we encounter no one but ourselves. We reach the start of our hike and sea cliffs stretch before us, shrouded slightly by misty rain. My fellow adventurers are ooh-ing and aah-ing, snapping picture after picture, but I admittedly am unimpressed. I was raised in Northern California, and the cliffs before me really look no different from the ones I’ve visited dozens of times near my aunt and uncle’s house in Half Moon Bay. My mind slumps feeling slightly regretful as I think I will be spending a third of my precious day and a half in Lagos seeing something I could see at home.

But little do I know, T.J. is about to prove my unuttered thoughts wrong.

You see, his tour is not a leisurely meandering along the cliffs. It isn’t a point-and-shoot-a-cute-pic-for-Facebook op. And, it most certainly is not a shuttle service for the fait at heart who merely want to see the terrain at a surface level. T.J.’s tour is a hands-on, up-close, rugged study of topography. 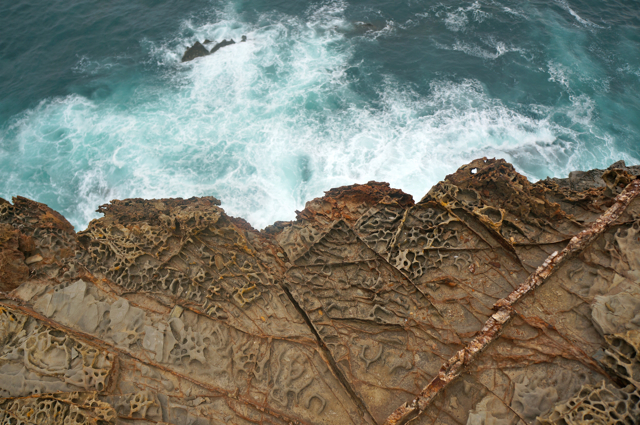 It’s using muscles you’ve never used before to push up and down, discovering that the cliffs are not a singular smooth slant of rock, but an intricate weaving of a multitude of levels and an infinity of nooks. 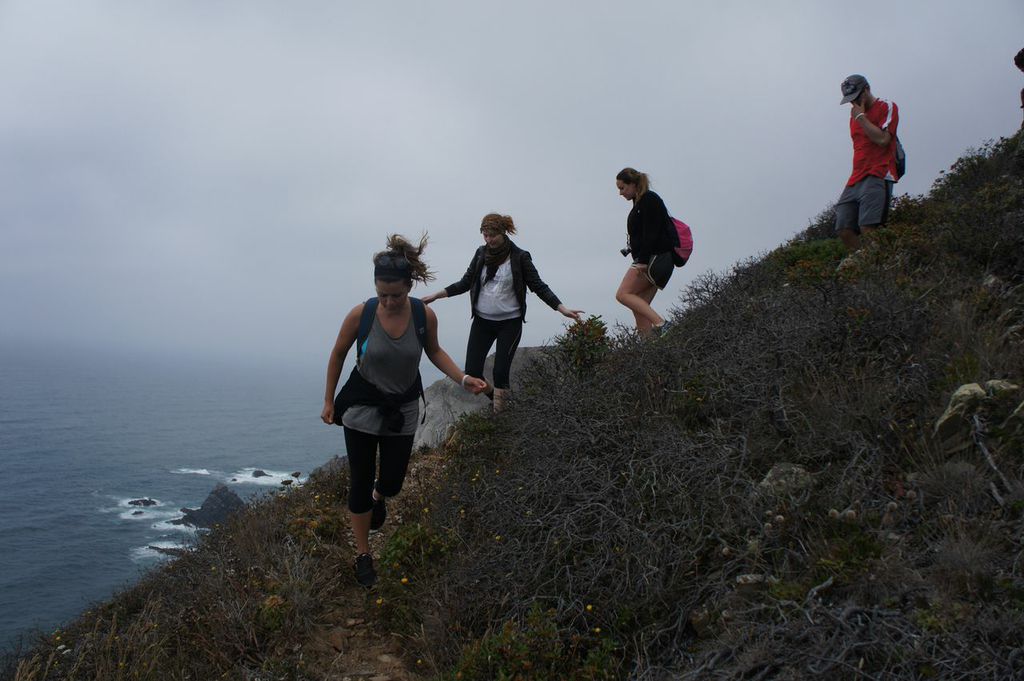 It’s being a stuntman (or woman) in your own adventure movie, your only mission to understand these cliffs as deeply and fully as possible. 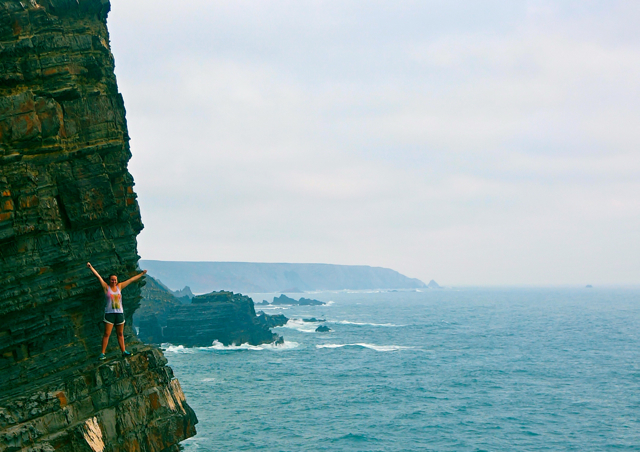 Hand over hand I become one with the cliffs as I unfurl layer after layer of the craggy landscape, new details and magic waiting to be discovered in each crevice and cranny I touch. I dare devil to new levels as I leap across narrow spaces between rocks and crawl out to edges, at times standing on platforms just two-feet wide. 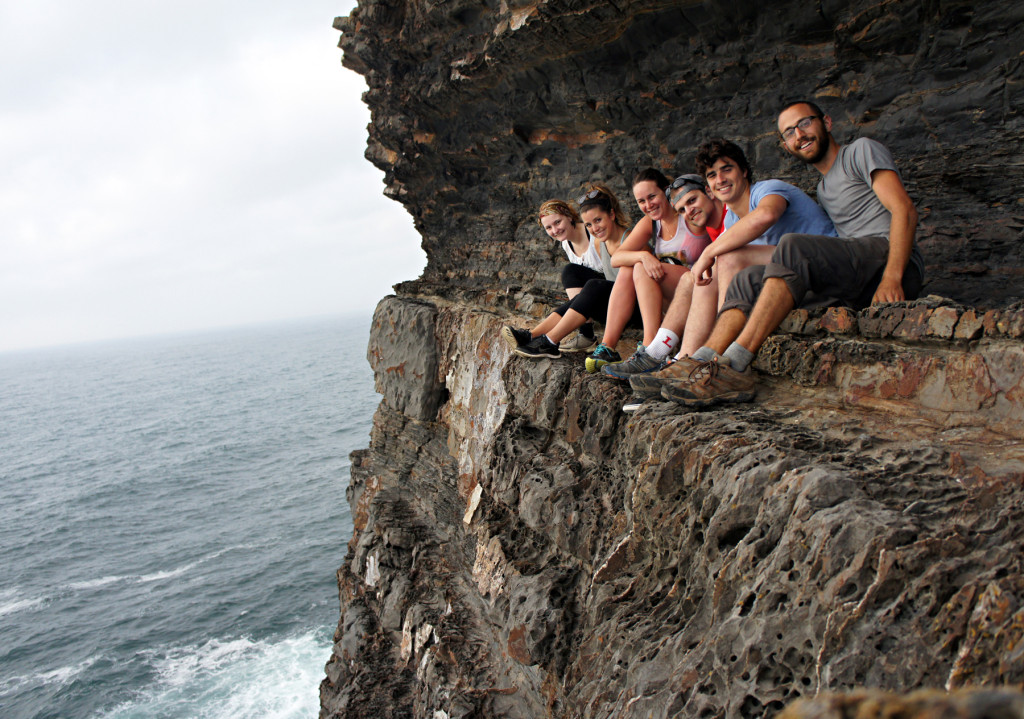 Climbing to the Sea

A worn rope awaits us at a particularly steep portion of the trail. It is a rope that is used by Portuguese fisherman to reach the sea and bring home their day’s bounty. The slope is daunting, but I prove myself braver than I think as I slowly descend, hand over hand, foot over foot. 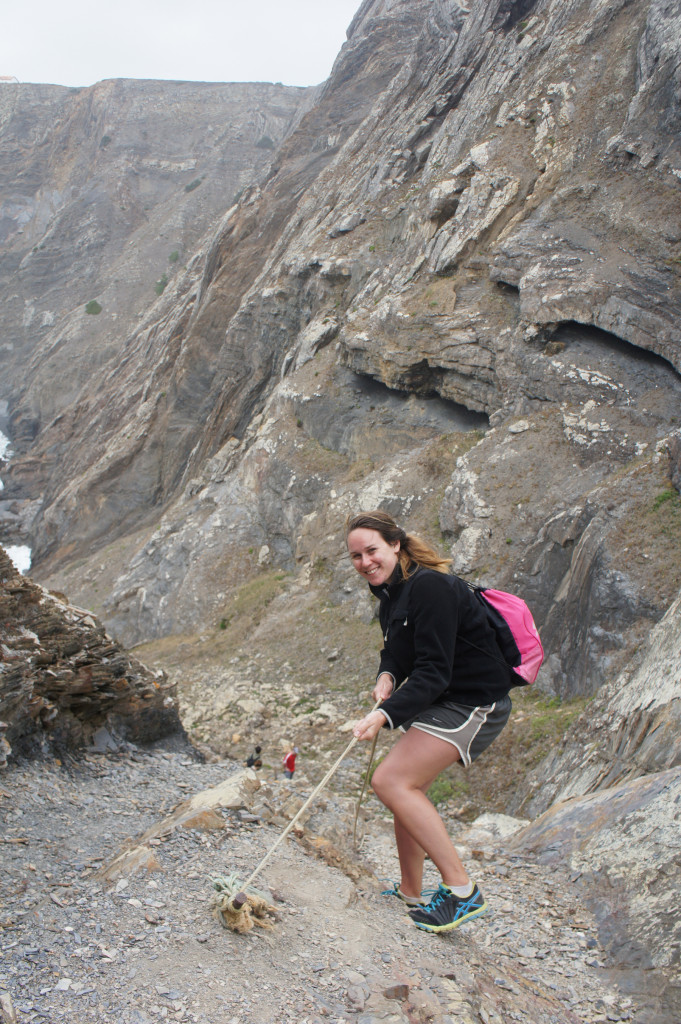 Our group reaches the shoreline – if you can call it that. There’s no sand, only jagged rocks and smooth boulders perfect for sitting. Entranced by the waves as they crash into shore and send sea foam dancing through the air, I remove my shoes and venture out, in hopes of dipping my feet in the cool water. 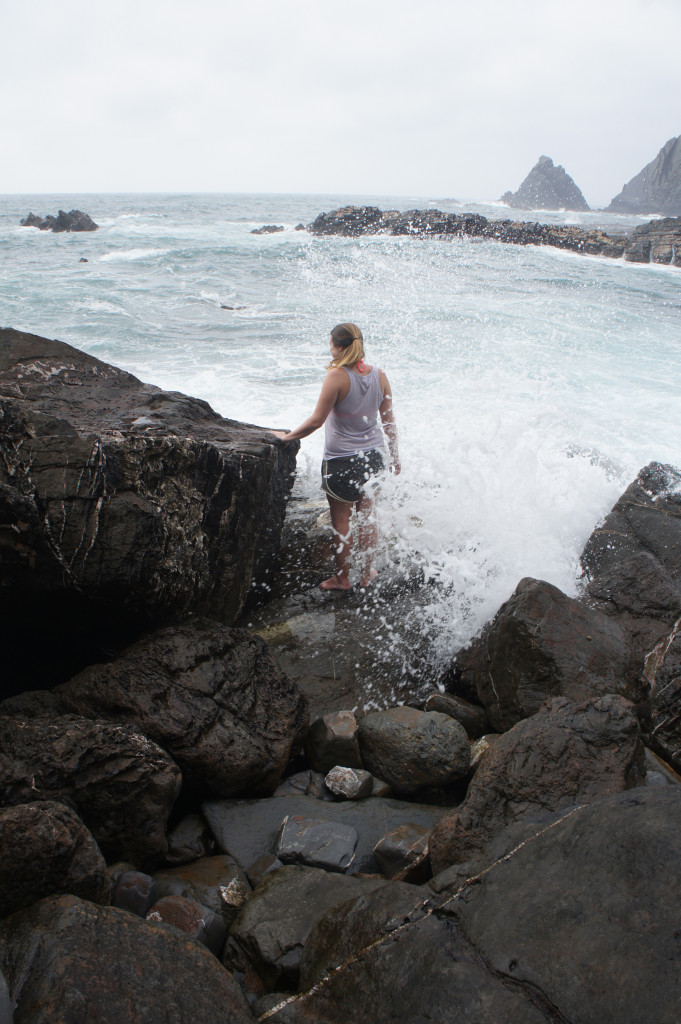 A wave rolls up and smacks me in the face, soaking my t-shirt and shorts. I turn around to face my new friends and laugh, deeply and genuinely. It is a rare laugh birthed not by force but by earnest and all encompassing happiness. 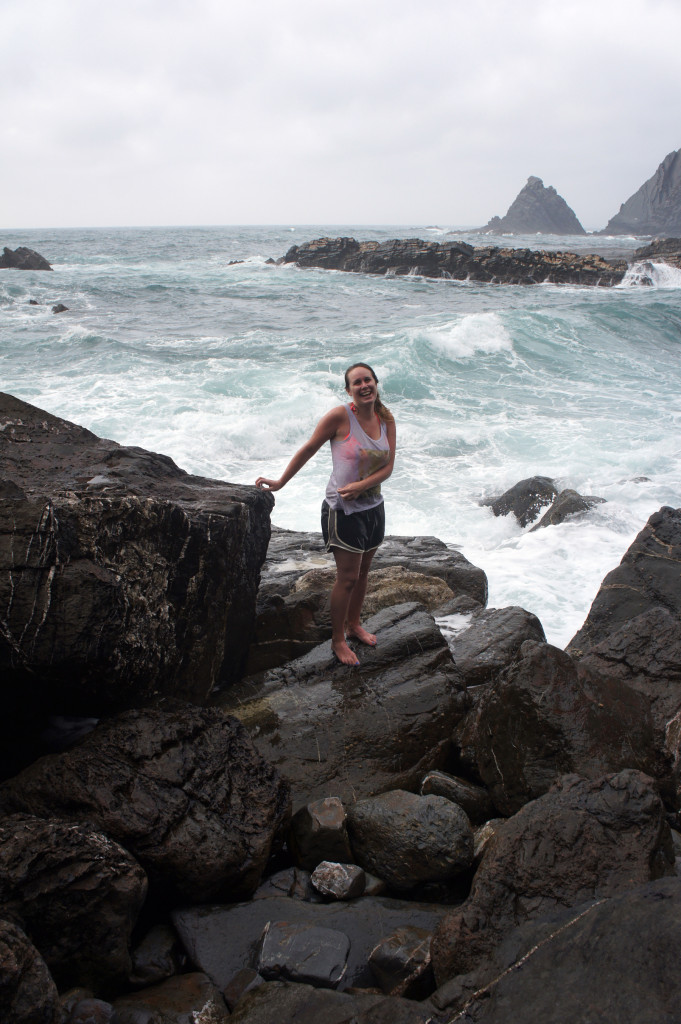 Another wave smacks me and I realize how wrong I had been to think I knew these cliffs as I stared at them from above, how wrong I had been to believe I also knew the cliffs from my childhood in California. Perhaps one can never truly know something so complex and mysterious as a sea cliff, but one can get awful close when exploring with T.J.

This is the adventure that led the five of us to Cape St. Vincent at sunset, filled with an unmistakable natural high from the adrenaline and fulfillment of a rewarding day of physical adventure. 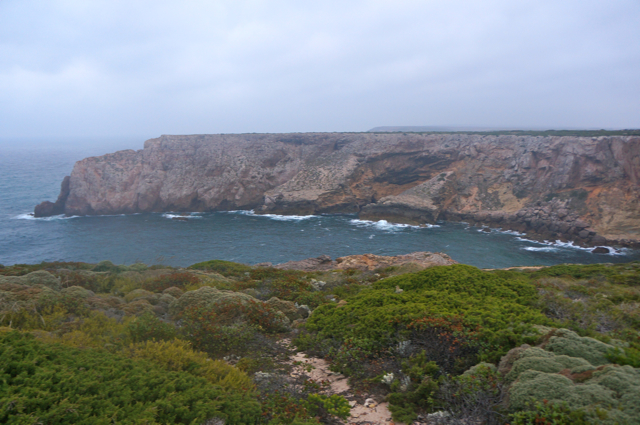 Back at Bura Surfhouse, a group ventured into the night to check out the bar scene in Lagos. I walked with them, but upon entering the doors of the first bar realized no conversation or drink here would match the feeling I had among the cliffs and no one here would be as interesting as T.J.  I left the group behind and headed to bed to hold on to the memories of my day among the cliffs.

Note: West Coast Adventure Co. sponsored my tour, however all thoughts and opinions are my own. To take a tour with T.J. send him an email at WestCoastLagos@gmail.com or visit his page on Facebook.