A convergence of houses hug the icy lake shore, their wooden roofs rising up to greet the green mountains that tower behind.  Steady raindrops fall, shimmering the deep blue waters with movement and casting a dim glow over the church steeple that dominates the scene. A light fog kisses the lake and gently twists up along the buildings, slowly dissipating at the base of the mountains.

If you’ve ever seen photos of Austria, chances are you’ve seen Hallstatt, a UNESCO World Heritage Sight that is synonymous with the upper region of this small, mountainous country. 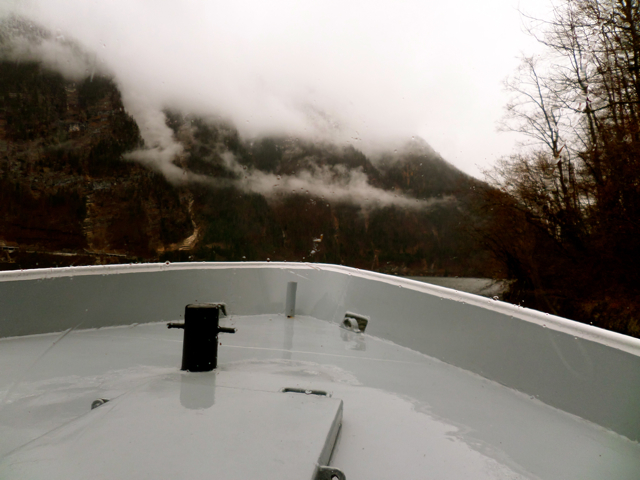 The old salt mining village dates back to 12,000, and, with its abundant natural resources, has supported societies for more than 7,000 years, from prehistoric humans to the age of the Roman Empire to modern day. Today, the town’s economy is driven mainly by tourism, largely coming from summer crowds. 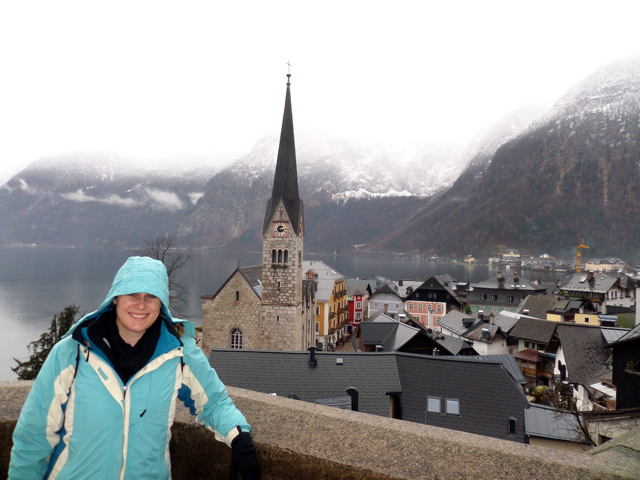 When it comes to Hallstatt, the summer tourists got it right. In the winter months the village is damp and dreary, revealing its sleepy nature as many attractions, shops and restaurants are closed. Regrettably the salt mine, one of the most notable sights in the region is among those that close up shop for winter.

I discovered this unfortunate news only after a two-plus hour train journey from Salzburg and a slow ferry journey across the lake from the train station to town center. 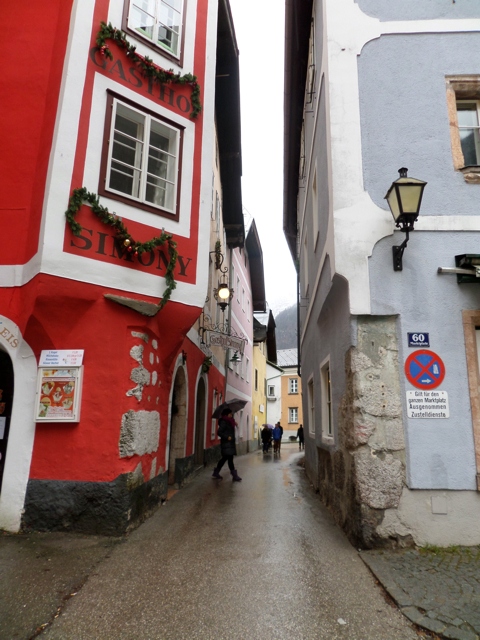 Note to readers: when travelling through Austria in the winter research the attractions you want to see ahead of time to ensure they are still open.

At the very least you should bring an umbrella.

Being the constantly prepared traveler I am, I left my umbrella in my hotel and spent a lovely day acquainting myself with Austrian rain.

Even on the rainiest of winter days, several main sights will still be open, providing a glimpse into the region’s fascinating history and a brief respite from the rain. 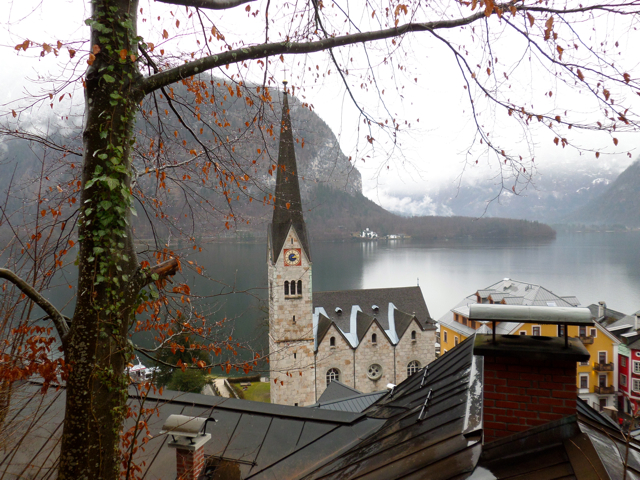 The central feature of the town’s architecture is the Protestant Church, built in 1863 in Neo-Gothic architecture during a period of religious tolerance. The church is most impressive when viewed from across the lake or up on the mountain trails, but it is worth a peak inside. 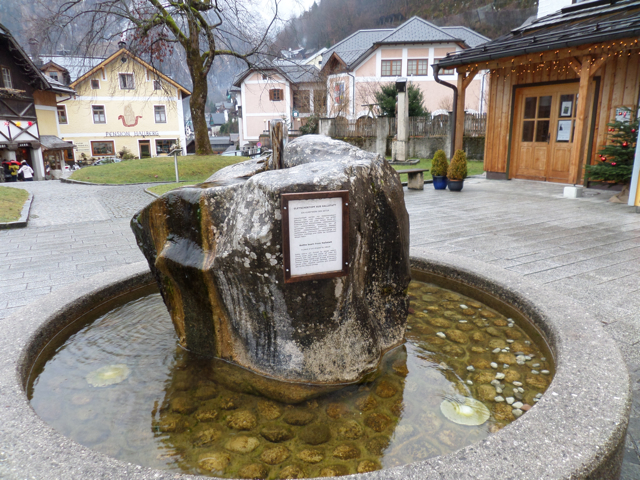 The nearby World Heritage Museum provides a fascinating insight into the history of the region and is full of artifacts dating back 7000 years. Exhibits are in English so this is a great place to get a hands on look at the story of Hallstatt. 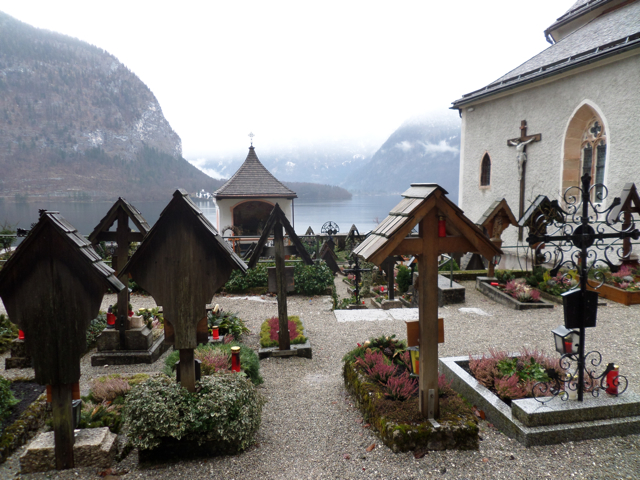 From the museum, take one of the winding paths up the hills to the Gothic Michaels chapel. Dating back to the 12th century, this small church was built in gothic style and offers sweeping views of the village. 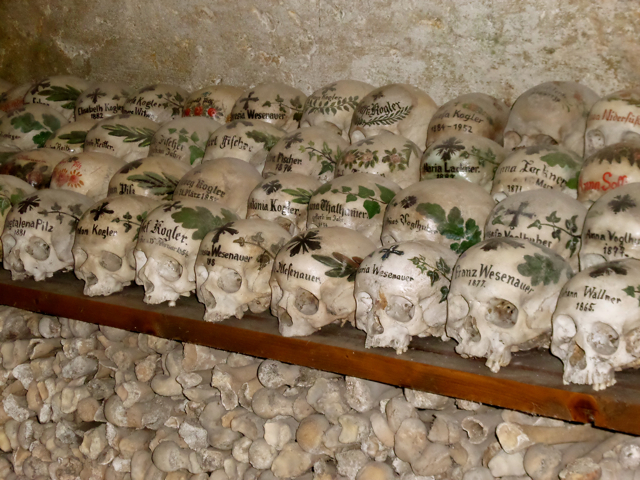 It is also home to a Beinhaus, or bone house. Hundreds of skulls and human bones are on display in this small ossuary. Many are hand painted. It’s a chilling sight to take in alone on the bleak mountainside. 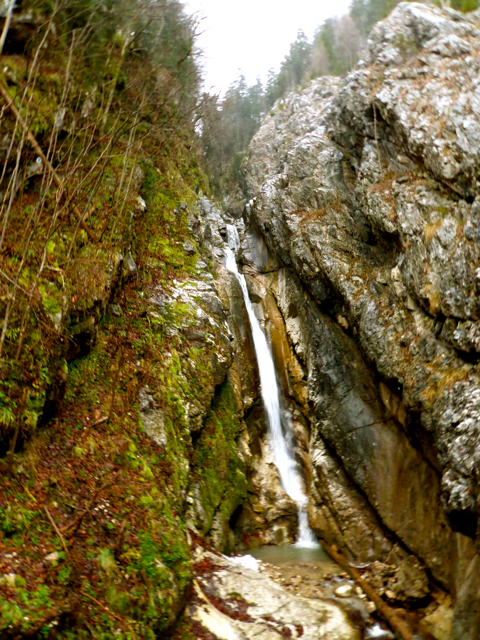 With a few hours to kill before catching the ferry back to the train station and not much open below me, I followed the hiking trails up to the Wasserfallwand, or waterfall for more panoramic views of the lake and mountain peaks. I didn’t encounter a single soul on my trek to a bridge that faces the waterfall and may have belted out my own version of “The Hills are Alive” from The Sound of Music. 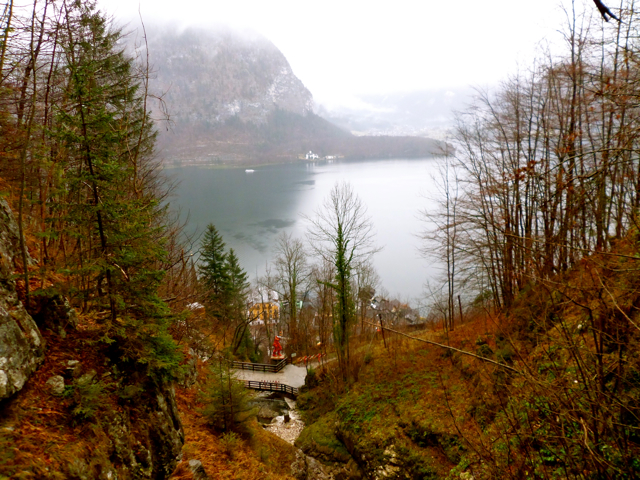 The rain picked up as I hiked back into town and ferried across the lake. As I waited for the train night fell and fog rolled back in, covering the landscape with an enchanting dream like quality. The train hugged the lake shores for a good part of the journey back to Salzburg, and we carved through the fog, pushing through the clouds like cotton candy. 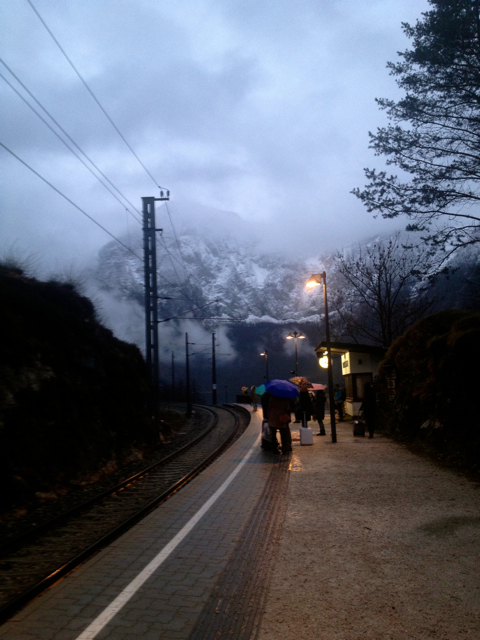