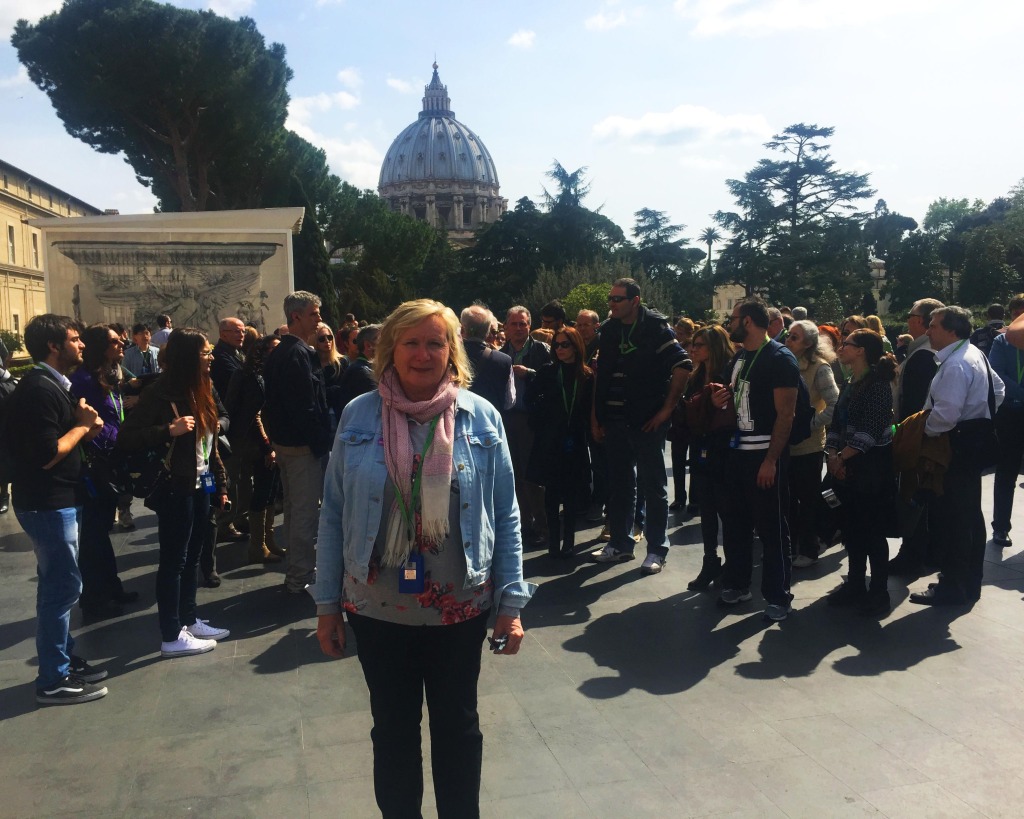 *Note: The following is a guest post from Guest Writer Lea Ann Christenson.

As I approach the entrance to St. Peter’s Basilica, a long line of tourists runs along the wall of Vatican City. This is my first visit to Rome and my time is limited as I am on my way to a conference in Northern Italy. It’s just after Easter, and all the attractions I have seen in Rome have been packed. I am told in the summer the wait to visit Vatican City is even longer, and made more uncomfortable in the hot Roman sun. Lucky for me, today I get to avoid the lines during my visit and tour Vatican City with City Wonders! 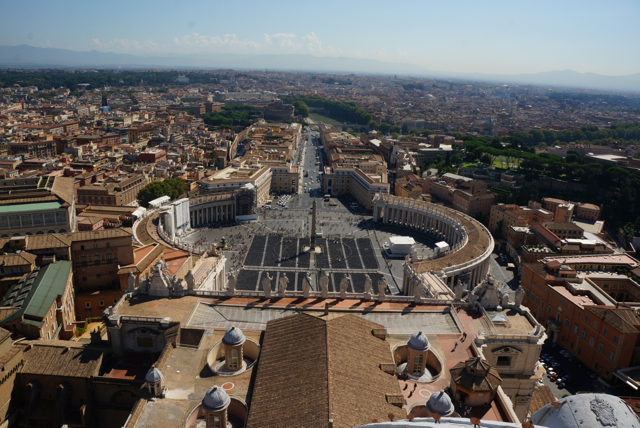 The Vatican Group Tour with City Wonders meets across the street from the Vatican Museum away from the crowds.  It was very easy to spot the friendly personnel as they were wearing shirts with the City Wonder logo.  They quickly checked me in and divided the people waiting in to groups of about 20 people.  My guide was Alexandro.  He was friendly, personable and a walking encyclopedia of knowledge about the art in the Vatican Museum. He had a scholarly approach as a tour guide as he gave just the right amount of contextual history to help us make the most of our visit. 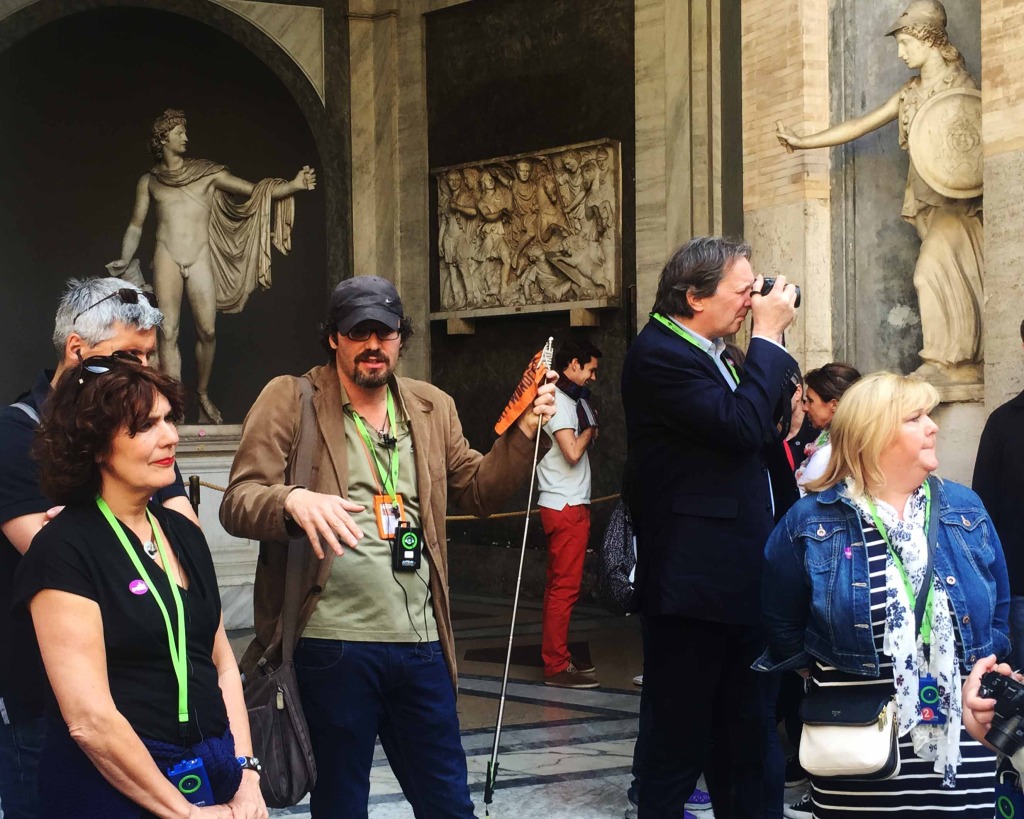 Alexandro wore a microphone and each person in his group wore a small earpiece so we could easily hear everything he had to say. Alexandro assembled our group, did a sound check and then whisked us across the street and to the front of the line of the museum.  He got our tickets and then proceeded with the tour.

The museum was very crowded but thanks to the microphone system we could easily hear Alexandro and follow him through the crush of people.  The first stop was an interactive screen much like a giant ipad where Alexandro showed us the Sistine chapel and zoomed in on the various paintings to give explanations.  We then made our way through the museum to view treasure after treasure.  One panting and sculpture was more amazing than the next until we arrived at our final destination the Sistine Chapel. 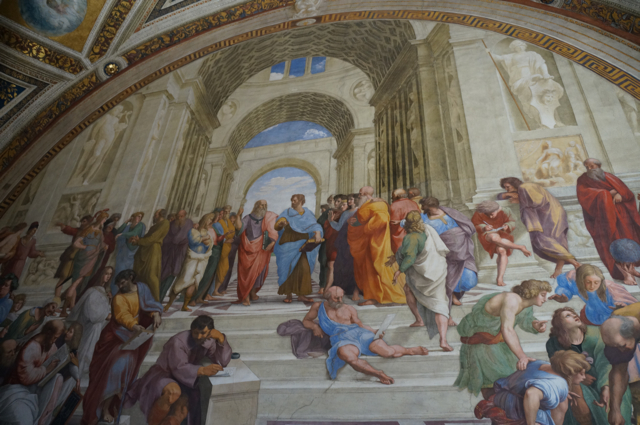 Michael Angelo painted the Sistine Chapel over the course of a four years.  Our guide reported that Michael Angelo was crippled by the hours he spent painting on his back and he never could fully walk upright after this arduous experience.

When we stepped into the Sistine Chapel, the small space was packed with people and chattering from visitors echoed loudly off the walls.  Every so often guards would yell at the top of their voices, and in multiple languages, for visitors to stay in silence and refrain from taking pictures. These warnings would quiet the crowd for several minutes, but soon the hum would build again. Photography is not allowed here because Japan paid to refurbish the ceiling and now owns the copy right to it.

The ceiling of the Sistine Chapel is an awe inspiring site and I could have stood there for a long time taking it all in.  Our tour ended here, we bid good by to our kind guide and made our way outside through the gift shop.  The tour usually ends in front of St. Peter’s Basilica, but during the day I visited the Pope was conducting a ceremony inside and it was closed.

Even though I knew I could not get inside the Basilica during my visit, I decided to walk to St. Peter’s Square. As soon as I walked up, if as right on cue, the cover on a giant monitor rolled opened and who should I see but the Pope on the giant screen conducting a ceremony. 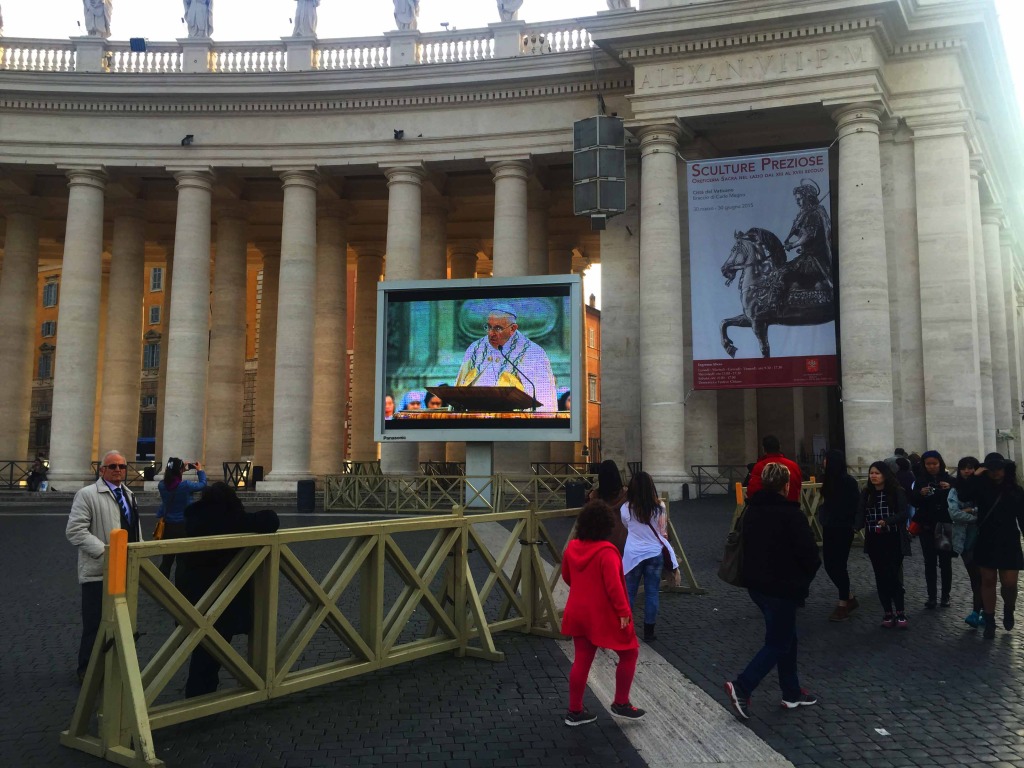 I stood watching the ceremony until it was over and then I watched people pour out into the square from the Basilica.  The crowd was full of priests and nuns.  A group of nuns near me spoke English and they excitedly told me the Pope had been proceeding over a ceremony. And so, although I did not get to see the Pope or the inside of St. Peter’s Basilica, it was a unique and special experience to get to see the Pope on a giant video screen in the middle of St. Peter’s Square.

I highly recommend a visit to the Vatican.  To make your visit enjoyable by avoiding the crowds and having a knowledgeable person tell you what you are seeing, take a tour with City Wonders.

Where to Stay in Rome

HotelsCombined offers the best rates on accommodation world-wide. Find and book a hotel in Rome below!

Note: City Wonders provided Something In Her Ramblings with a complimentary tour. However, all thoughts and opinions are the writer’s own.