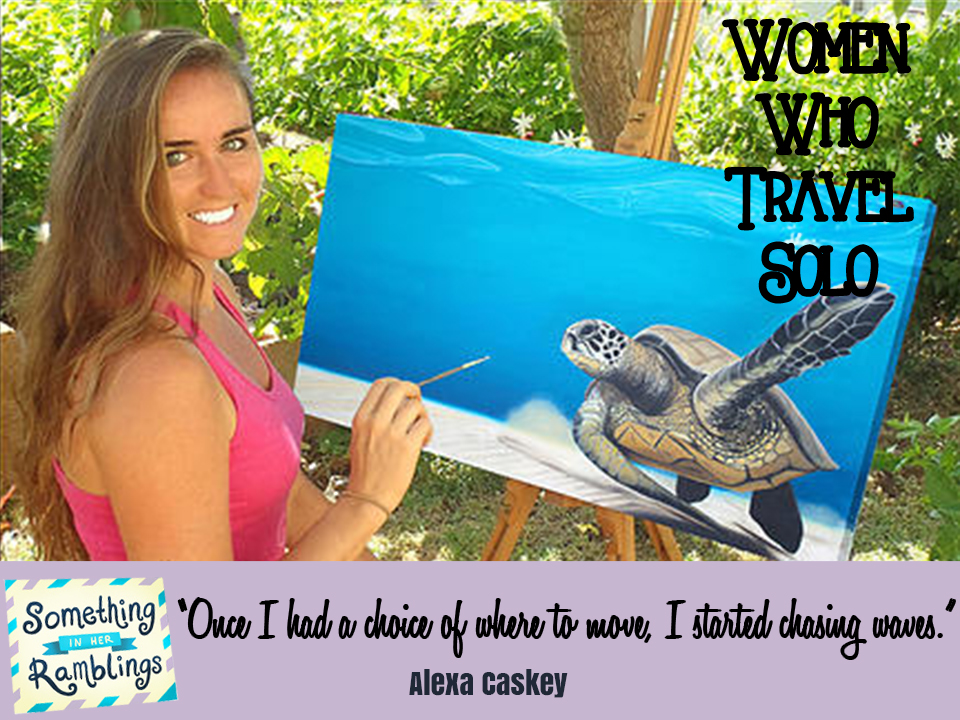 Artist Alexa Caskey is currently living in a 1988 RV with her dog and traveling around the country doing art shows and raising money for the Sea Turtle Conservancy, the largest Sea turtle education and protection organization in the country.

Artist Alexa Caskey is currently living in a 1988 RV with her dog and traveling around the country doing art shows and raising money for the Sea Turtle Conservancy, the largest Sea turtle education and protection organization in the country.

Tell us about your travel journey.

I grew up in a military family so I’ve been used to moving around every few years since I was born. And once I had a choice of where to move, I started chasing waves and have been doing so since 2005 when I entered the Ocean Engineering program at Florida Atlantic University. During my last summer at the university I spent a few really life changing months traveling by myself in Costa Rica that reshaped my future from the path of Engineering that I had been following to pursuing my passion in art. Immediately after graduating, I bought a one way plane ticket to Alaska and hadn’t a clue what I would even do or where I would go when I got off the plane in Anchorage. I had a indescribable, overwhelming sense of ease about it and as it turns out I met a guy in the airport who ended up being my boyfriend for the next few years.   Alaska led to a little west coast RV tour, then Key West, then Midwest, another West Coast tour in a different RV which ultimately took me to Maui. This is where I began to paint full time. After a few years of painting there I got a suggestion from a fellow artist to get an RV and go on a mainland “art tour”  which is following the outdoor art show circuit across the country.  And that’s what I’ve been doing since March 2014 with my dog Beans!

Costa Rica probably because it’s so untainted (in the non tourist areas).  Hawaii is unbelievable in so many ways as well, and I really fell in love with Colorado this summer during my tour as well. 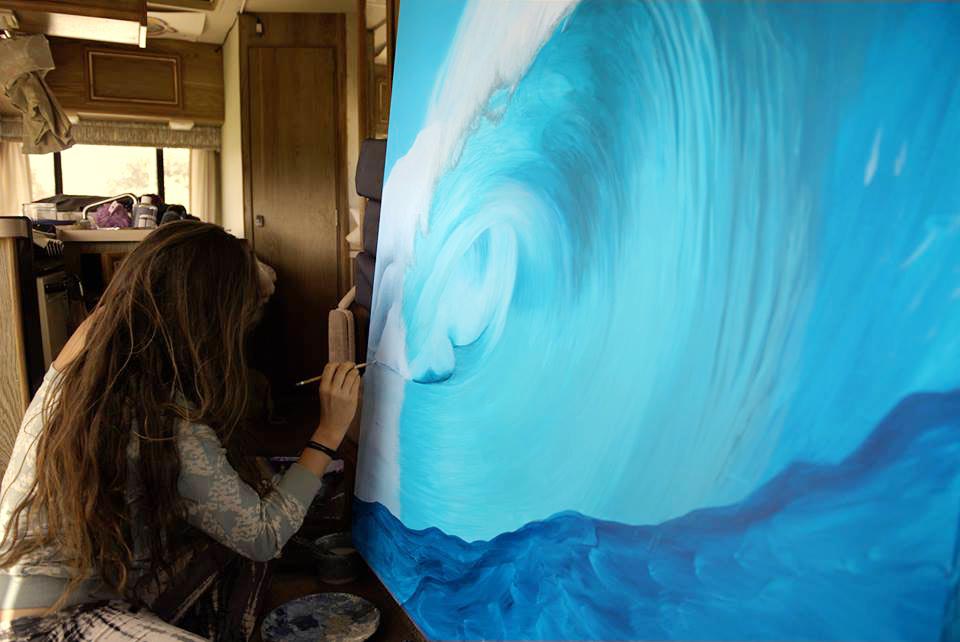 Costa Rica was my first solo trip I think and it opened my eyes to the opportunities that are presented to you when you travel alone versus with another person. People opened their doors to me and gave me jobs and rooms to stay in. I don’t think I would have been given so many opportunities from people if I hadn’t been alone. I was really not stoked to come back to the mainland after that!

I’d say just the story of me flying to alaska with no plans what so ever is probably the most intriguing to other people. When people would ask concerned what I was going to do when I got there I couldn’t explain it but I just knew it would all work out. 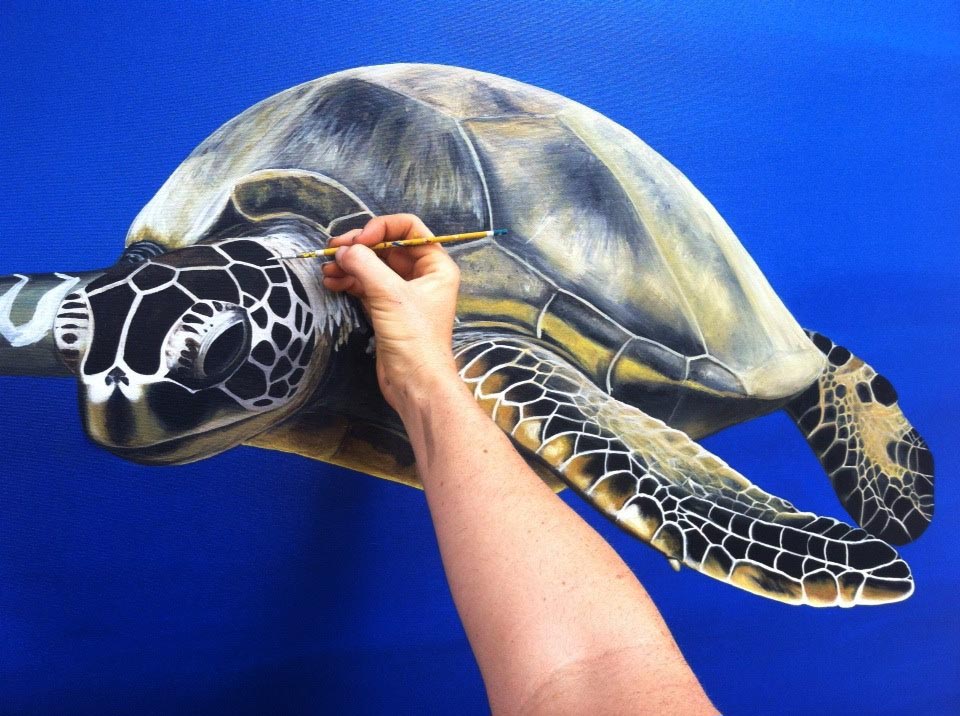 What have you been able to learn from travelling solo that you wouldn’t have by travelling with a companion or in a group?

I’ve learned how to be resourceful! I’ve always been resourceful, but that something that you really figure out quickly when you don’t know where you’re going to sleep that night. Also, how to ask people or just put it out into the universe what you’re looking for and what you want and you’ll receive. 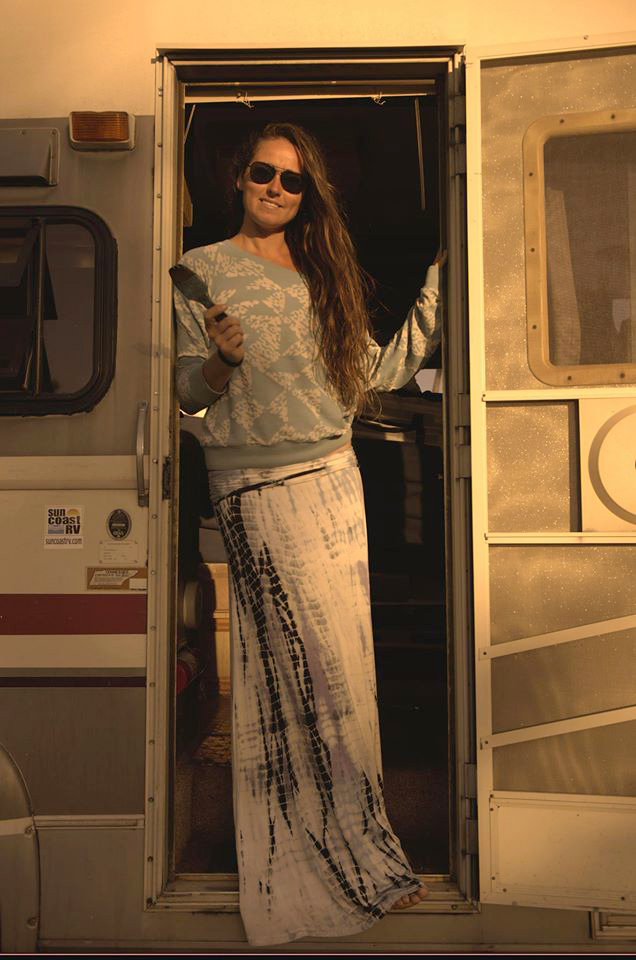 Be confident and don’t be flashy. I’ve always just looked like a broke dirty hippie and I think I avoid a lot of the problems people are scared of that way. Don’t walk around wearing or carrying something that costs more than people in whatever country you’re in make in a year. Use common sense.

Anywhere you want to go!

Alexa is currently living in a 1988 RV with her dog “Beans” traveling around the country doing art shows and raising money for the Sea Turtle Conservancy, the largest Sea turtle education and protection organization in the country. View her art work on her website, or read about her travel adventures on her blog.