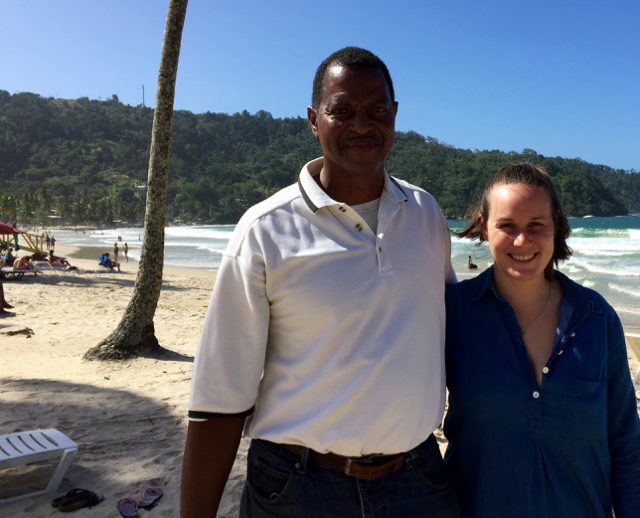 Come one and all. Let’s have a ball. It’s Carnival time again.

With cheery voices, sprightly whistles and the soft beat of the steel pan, soca music comes on full blast through the radio as I roll through Port of Spain. I sit alongside Norm, my guide for the day from T & T Sightseeing Tours touring Trinidad and feel the Caribbean vibes flow through me.

“What’s all this talk about Carnival in the middle of lent?” Norm asks. Carnival has just ended a few days prior to my visit. “We just don’t let it go,” he jokes and I erupt in laughter. 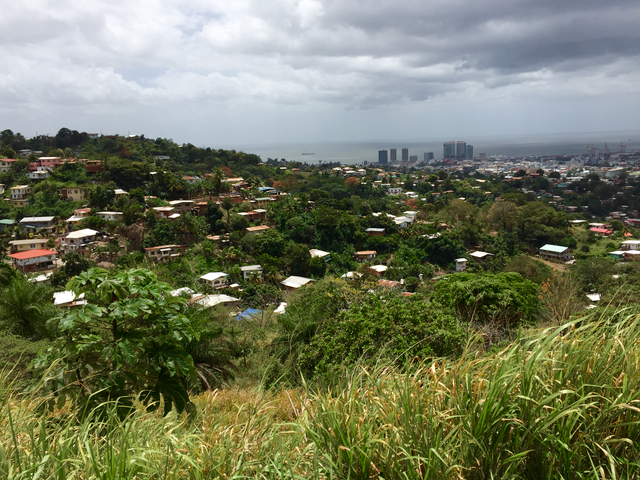 My first full day in Trinidad, the most southerly nation in the West Indes, has been full of joy. From the moment Norm picked my mom and I up at Culture Crossroads Inn, I felt an immediate kinship with this warm man. His easy-going nature and kind heart has made the day feel more like visiting city highlights with the relative I wish I had in the Caribbean, rather than a tour guide, although his destination knowledge is so on point the level of laughter has been met equally met by my level of learning.

Much of the city sits on reclaimed land, in an area that once was part of the sea. Without Norm as a guide it would be difficult for my mom and I to locate highlights on our own, and we are glad for the ease of being with Norm. We drive past such historic places as Marine Square, the Cathedral of Immaculate Conception, and the Hyatt Regency where President Obama and Hugo Chavez shook hands in 2009.

Visited by Christopher Columbus on his final voyage to the New World, Trinidad was a Spanish colony before being invaded by Great Britain. In the 1800’s, the production of cocoa and sugarcane put the British colony on the world map. When slavery was abolished in 1838, indentured servants from India were imported to work on the plantations.

The motto of the country is “together we aspire, together we achieve,” and was instated when the country received independence from Great Britain. A mix of cultures is at the core of the country’s identity. The population today still reflects this history; 40 per cent is of African descent and 40 per cent Indian descent. The unique blend of races and cultures has created a distinct “Trini” culture that is a true melting pot. 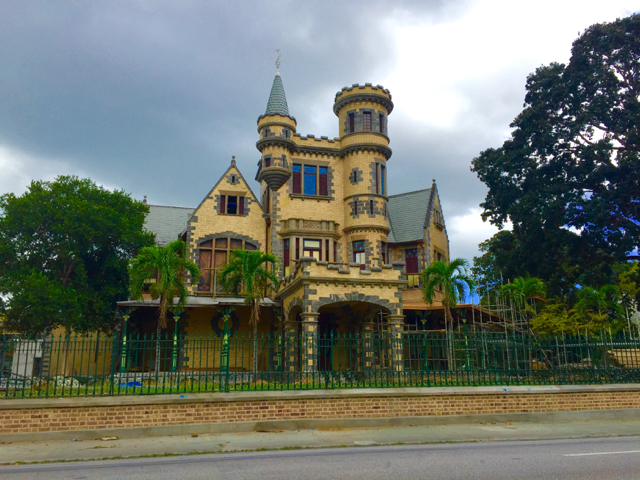 One of the major highlights of the city is Queen’s Park Savannah. If you are visiting the island during the famous Carnival celebrations, you’ll likely lime with locals during festivities in this area. This public land area is also famous for being the largest roundabout in the world.

Here we circle the Magnificent Seven, a series of seven homes built for the wealthy cocoa magnets in the 1800’s. Built in varying architectural styles, the most notable home today houses Queen’s Royal College, the second oldest secondary school in the country. 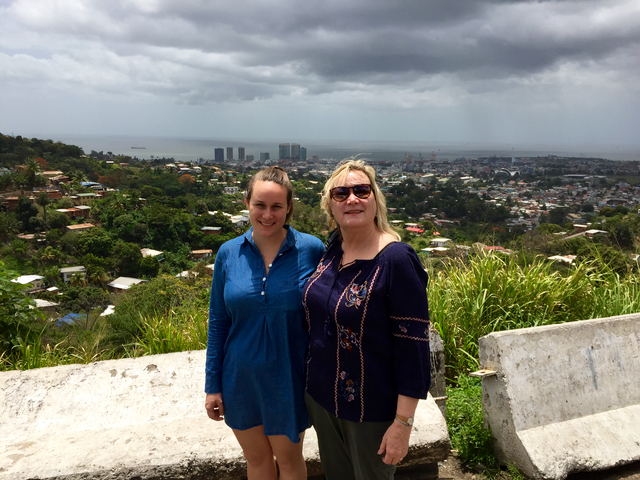 When it comes to views, Norm knows its best to head for the hills. We drive up to the Lady Young Road Lookout. From here all the sights and attractions in the city stretch before us, from the quirky, cruise-shaped building that houses the National Library to the stately bricks of the Red House parliament building to the National Performing Arts Center, a metallic (and loose) interpretation of Sydney’s Opera House. Though its not quite clear enough for us to see the coastline of Venezuela which sits just seven miles away, we do have clear views of Invader’s Bay, the cove where British forces invaded in 1797 and overtook the island from the Spanish. 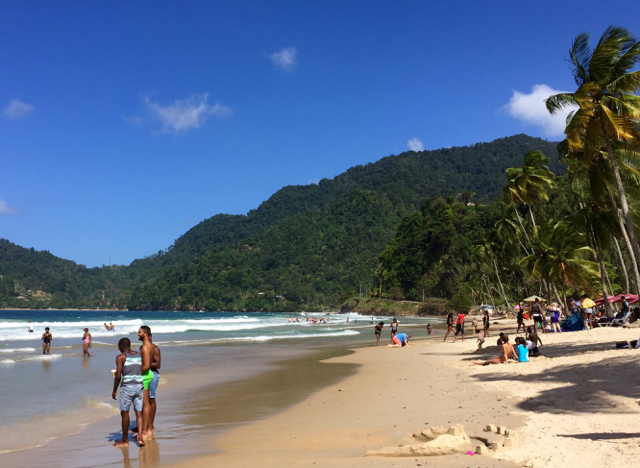 From the city we head to paradise, or more specifically Maracas Bay, the number one visited beach on the island (which also happens to be the closest to Port of Spain).

Maracas Bay is known for ‘bake and shark,’ a local dish of fried shark and bread. Every local, including Norm, will insist that you must try this dish at least once while visiting the island. Norm takes us to Richard’s, the most iconic eatery that lines the beach. I admit I am not so adventurous when it comes to eating and don’t eat much seafood so I opt for the vegetarian option instead. My mom has a braver pallet than I do, however and is up for the challenge of enjoying a meal of shark. I take a bite out of hers and must say – bake and shark is not so bad.

Before departing this idyllic scene, my mom and I take a walk along the beach and enjoy a few moments in the azure water soaking up the beats of soca and swaying palm trees. 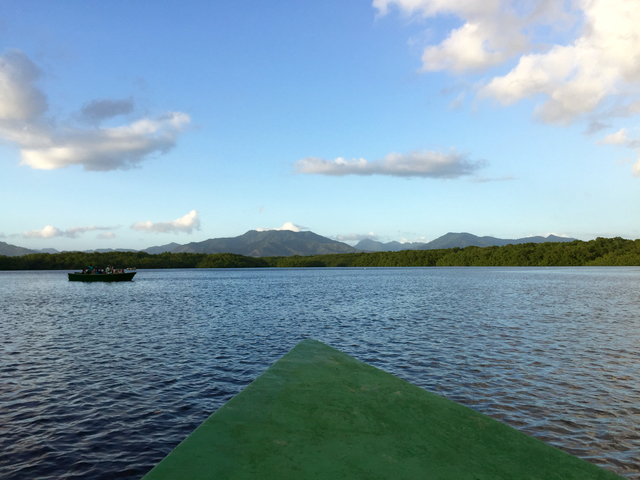 From the beach we head to the mangrove forests of the Caroni Bird Sanctuary. Here we join a larger group for a boat trip to the islands that fill the swamp lands.

As sunset takes hold the skies come aflutter with as flocks of scarlet ibis fly across the waters to land on the trees where they will nest for the night. In the bright orange hues of the setting suns the bodies of Trinidad’s national illuminate like balls of fire ignited by the setting sun. My mom and I weren’t expecting to be this wowed by birds, but the magnificent sight of these scarlet birds lit up in brilliance was truly a breathtaking experience. 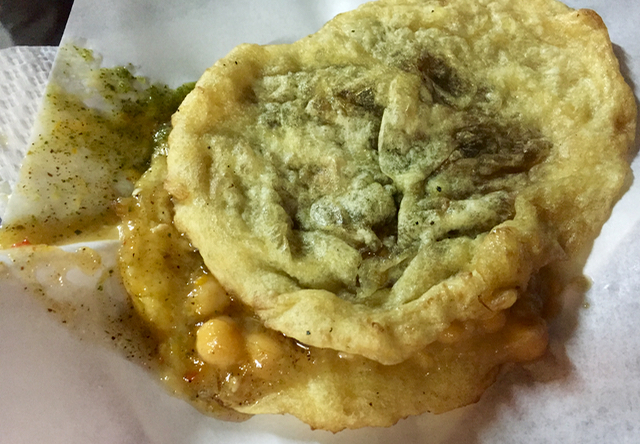 Before dropping my mom and I back at our accommodations for the evening, Norm makes one last unscheduled stop at a local doubles stand near our hotel. We are in for our second foodie adventure of the day as Norm orders us fresh doubles, a sandwich-type snack made with two pieces of flat fried bread stuffed with curried chickpeas and pepper sauce. For my taste buds this non-seafood delicacy is a welcome surprise and I feel my mouth light up with zest from the spicy sauce, cooled down by the soft night breeze that fills the air.

“When you come to Trinidad you have to have a good time,” Norm told me earlier in the day. “You have to love and party.” 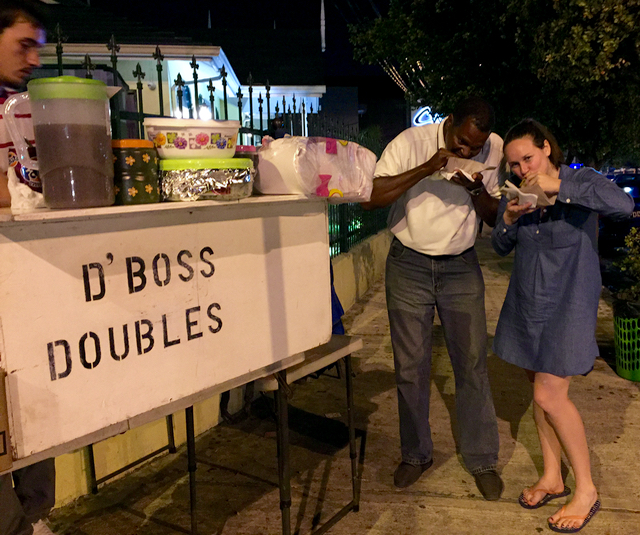 The weight of his words sinks into me now. I don’t often use the word perfect to describe my travels. This is because I believe the very nature of travel is imperfect and it is through these imperfect moments on the road that the beauty of this crazily complex and at times difficult to understand world is revealed. And yet, standing on a street corner eating doubles with Norm my mouth warmed by spice, my heart warmed by a new friendship — that was the perfect end to a perfect day.

Note: I received a complimentary tour from T & T Sightseeing Tours. However, all thoughts and opinions are my own.