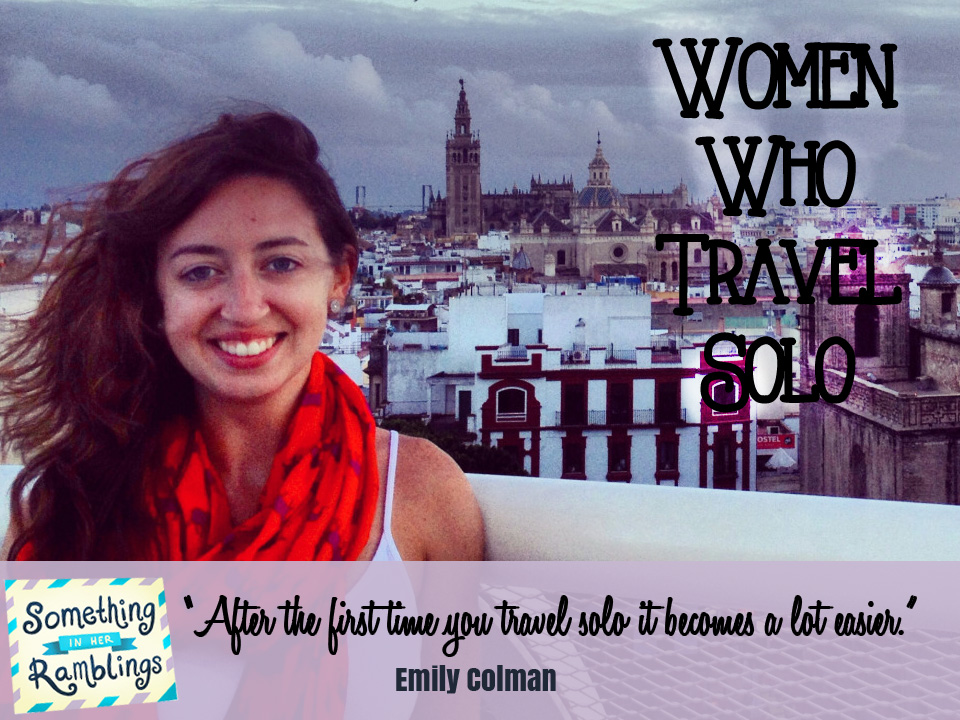 Originally a skeptic of solo travel, Emily Colman learned to overcome her hesitation to travel alone while living and working in Madrid. In this week’s Women Who Travel Solo, Emily shares her journey of overcoming solo travel fears.

How did you get your start traveling?

To be honest I was never really a big traveler. My family did the typical beach vacations growing up but I had never left the country until I studied abroad in Costa Rica as a Junior in college. Unfortunately, I had too many expectations for the experience and the trip ending up having a lot of ups and downs. It was not the picture perfect trip I was expecting, and I don’t think I was mature enough to fully appreciate it.

I didn’t have the desire to travel again until I did a program called Birthright where I traveled to Israel with a group of other young adults in Washington D.C. After that trip, something just clicked. I was so blown away at how different the lives of others were. Not only the scenery but the people I met were incredible. I wanted to learn more about the world, get out of the perfect and safe bubble I had been living in and have a change. So I told myself, Emily, you need to travel. After saving up enough money at my job, I applied to be an English teacher in Spain and was able to travel to nine countries in ten months. 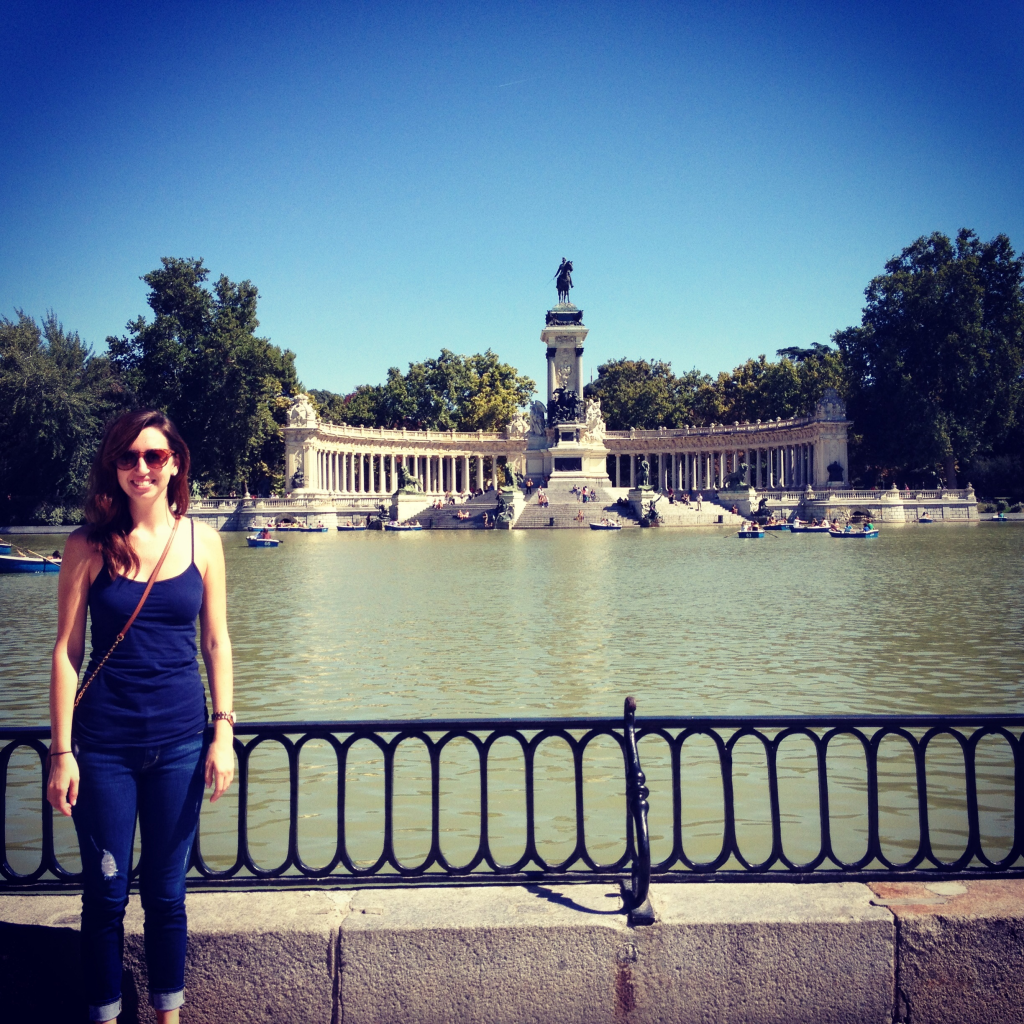 What were your initial thoughts on solo travel?

My initial thoughts on solo travel were that it was a bit reckless and ultimately unsafe for women to travel alone. I also couldn’t understand why anyone would want to go alone…don’t they get lonely?

Why did you decide to take your first solo trip?

I decided to take my first solo trip because no one else wanted to go to the location I wanted to go to — London! The majority of travelers in my friend circle in Spain had either already been to London or had other plans during the time period I was looking at going. I had hesitation to travel solo, but I didn’t want to rely on others for my trips. I just wanted to go with it, so I booked an eight-day trip to London and Paris and went!

My family and I were both a bit nervous about traveling alone but I thought, this is my year to explore and learn, so I’m going do it. 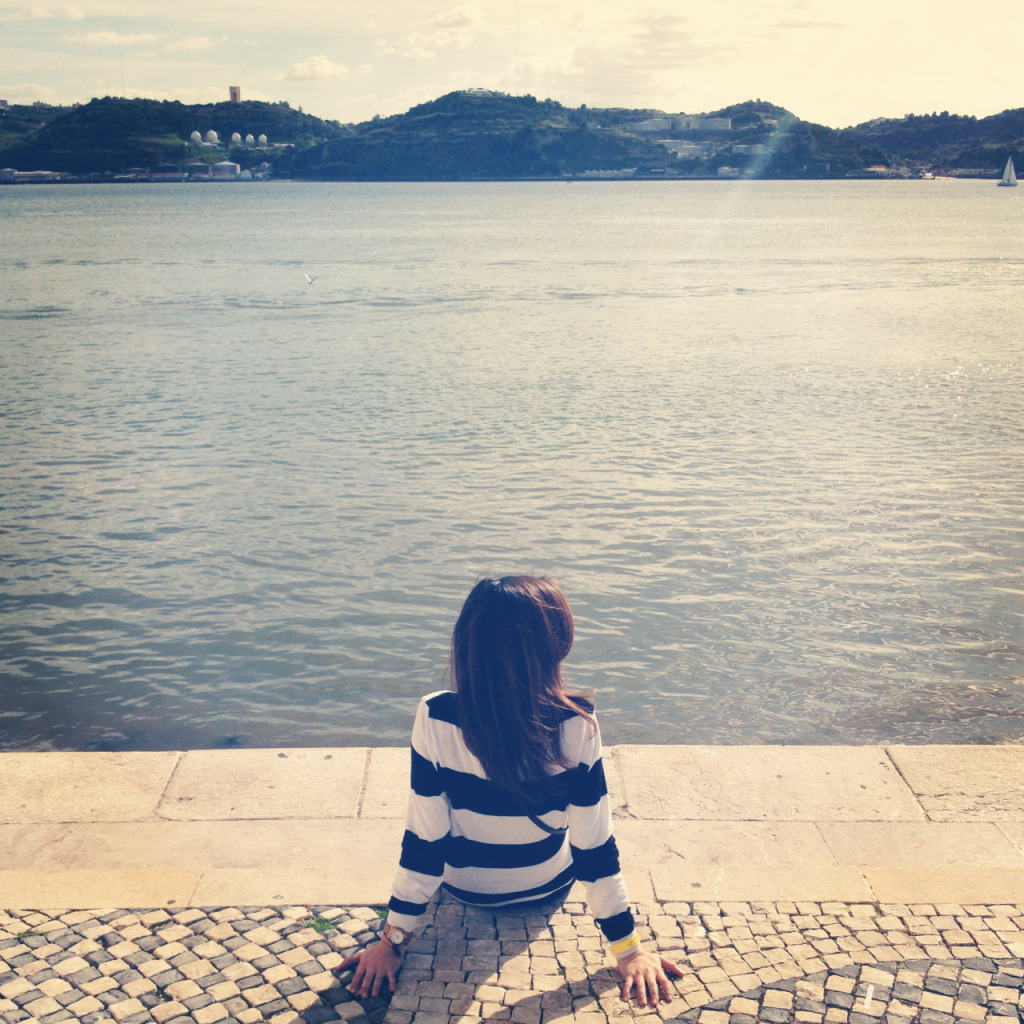 What were your experiences on your first solo trip?

My first solo trip was to London, three months into my time in Spain. I think every girl dreams about going to Paris and since London is so close I thought I would tack on both together. Before I went I talked to a few friends who were saying “you HAVE to do this, you HAVE to see that, this is the BEST thing about London, etc.” I appreciate the recommendations but it was so overwhelming and honestly the whole time all I could think was Harry Potter, Harry Potter, Harry Potter! 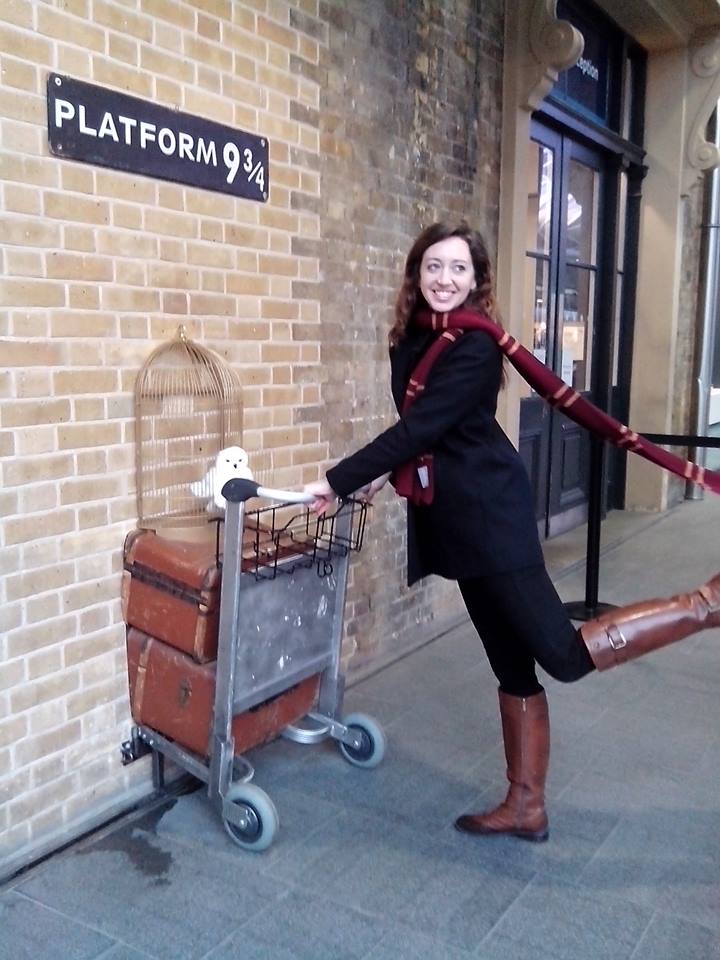 So of course I went and saw Platform 9 ¾. I also went on the London Eye, The British Museum, Tower Bridge, Buckingham Palace, Harrods, St. Paul’s Cathedral, and the play Wicked.

Surprisingly enough, I felt pretty good the majority of the trip. It was my first time staying in a hostel alone and I found more people that were either traveling alone or very friendly. I do think it helped quite a bit that my fellow hostel goers and I spoke the same language. After living in Spain for three months it was very comforting to be back in a place that spoke English.

However, a few times I felt very lost, directionally speaking. I had to ask for directions a lot, which can get annoying to never know where I’m going and to always hop on the tube, which was a lot and also very costly. Sometimes it’s just easier to have someone else there to help navigate the way through big cities.

What was the best part of this solo trip?

Doing my own thing and not asking someone if they wanted to do this, do that, etc. If I wanted to hop on the tube and go to see platform 9 and 3/4, I could do it! If I wanted to stop for fish and chips and spend a couple of extra minutes people watching, I could do it. There’s also something so intriguing about London. It can feel like a very dark and dreary, yet welcoming and charming city at the same time. This was something I hadn’t experienced before, and it made it an ideal first solo trip.

What was the worst part of this solo trip?

I flew into London Stansted and had to take a 2.5 hour bus ride into central London. Next time I will learn to always fly right into Heathrow, which is much closer. My ears had been popping and I could only hear out of one ear. I was feeling a bit lousy but decided to go on the London Eye. I waited alone in line and it felt pretty depressing. I think it might have been a combination of the weather, being alone, and just being unsure of what to do in the city that got to me.

It also gets dark so early over there, I ended up going back to the hostel to realize it was only 6 p.m. The bar crawl from the hostel had already left — I guess they party a bit earlier in the UK than they do in Spain, so I ended up going to bed without making many friends. In that time I realized it would have been nice to have someone with me to grab dinner or just talk.

What other solo travel experiences have you had? How have your thoughts on solo travel changed over time?

I traveled solo to parts of Italy and Barcelona.  After the first time you travel solo, it becomes a lot easier. You know how to make friends at hostels, go with the flow, and realize that you can’t see EVERY single tourist attraction in a weekend trip. Now when I travel, instead of researching every single thing to do, I typically ask the clerk at the hostel what their favorite thing is to do in that location. I did this in Rome and ended up seeing some really cool things that most tourists don’t know about. Again, a huge perk of traveling alone is you don’t have to worry about wanting to see or do something someone else doesn’t want to do.

My biggest change in thought about solo travel is that, it’s really not as dangerous as I was expecting, as long as you act smart. I’ve definitely learned to let my guard down more than I ever have. I have also realized that people are genuinely nice.

On my last morning in Barcelona, one of the guys I made friends with in my hostel took me out to breakfast…and PAID. For any of those currently dating in DC I have a hard time getting the guy to pay for my $7 beer let alone a meal. He said to me “I remember what it’s like to be traveling, let me treat you.” Umm…YES PLEASE! But really, a nice gesture like that really made my day. I hope I can pay it forward for someone else the next time I travel abroad. 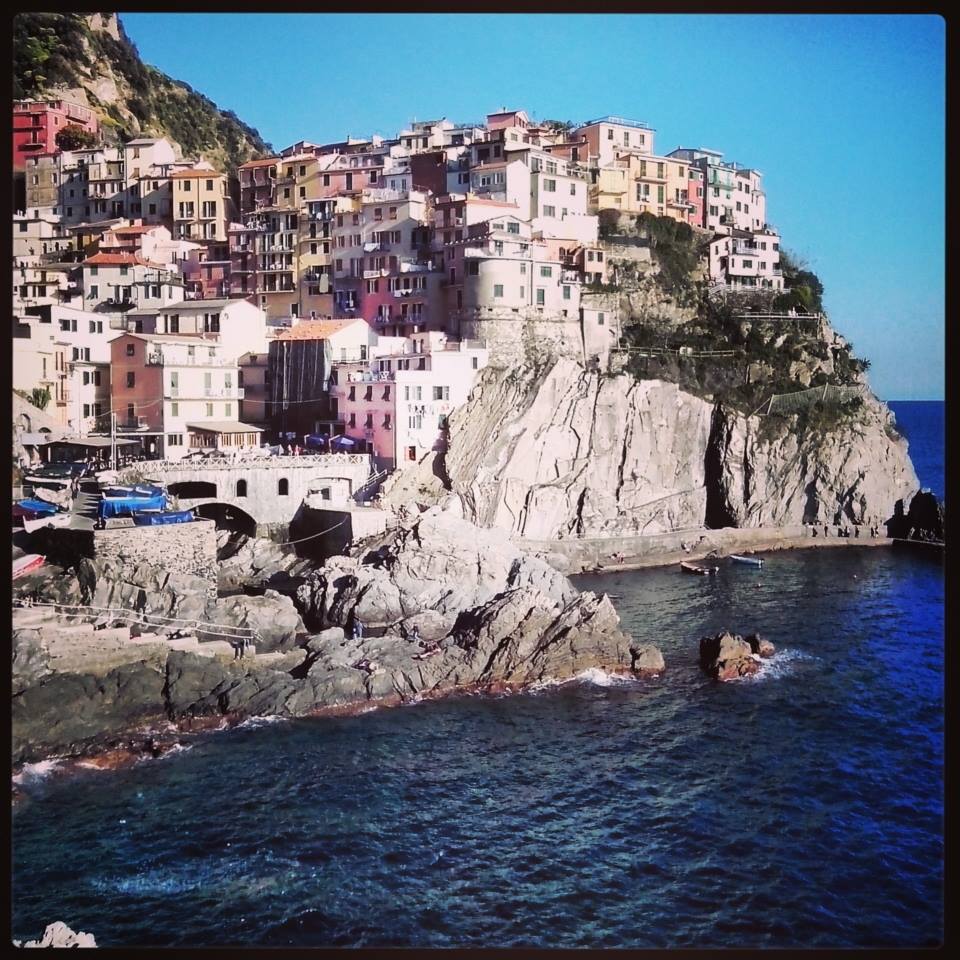 What recommendations do you have for women who are hesitant about taking a solo trip?

If you are hesitant about taking a solo trip, try building up to it. When I lived in Europe there were tons of small towns close by I could travel to by train or bus. Try a quick day trip and go by yourself. Nothing too crazy and see how it goes. If you hate it, who cares! At least you tried it.

If you are ready to jump across the world and go solo, be smart. I am 100% type A personality and you can bet that I have my Passport/Visa in both paper and electronic copy. I share a Google doc with my family including flight and hostel info so they know where I am traveling to at all times.

I also do pretty extensive research before booking a hostel. I recommend booking a mixed dorm if possible. I always find the men and women in these dorms are MUCH more friendly than women only dorms. If you are getting a private room in a hotel or hostel bring a doorstop to place behind the door to prevent any intruders. Again, I will say that I found the world to be much less dangerous that I was expecting, but be safe and trust your instinct. 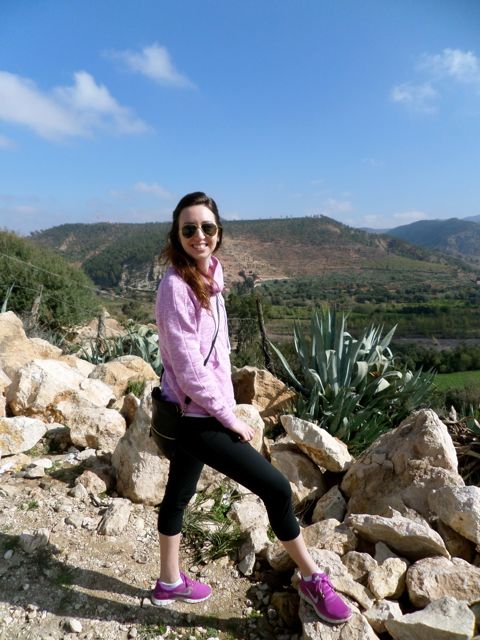 The one thing I will harp on is that traveling alone has really helped me become more independent and confident. I’m sure we all have friends that are a bit needy, or can’t do anything by themselves. I don’t feel in the past I was super needy, but it’s definitely easier to rely on someone else if you are always with him or her.

I do/did seek a lot of advice before making big decisions (such as traveling alone or moving to Europe for a year). After traveling I feel that I don’t need the “OK” or permission from someone else when making decisions or taking others opinions about what is right/wrong. I feel like I can do or see what I want and not need to be worried about what others think. I hope for other women to be able to push themselves past their comfort areas and see what they can accomplish on their own. 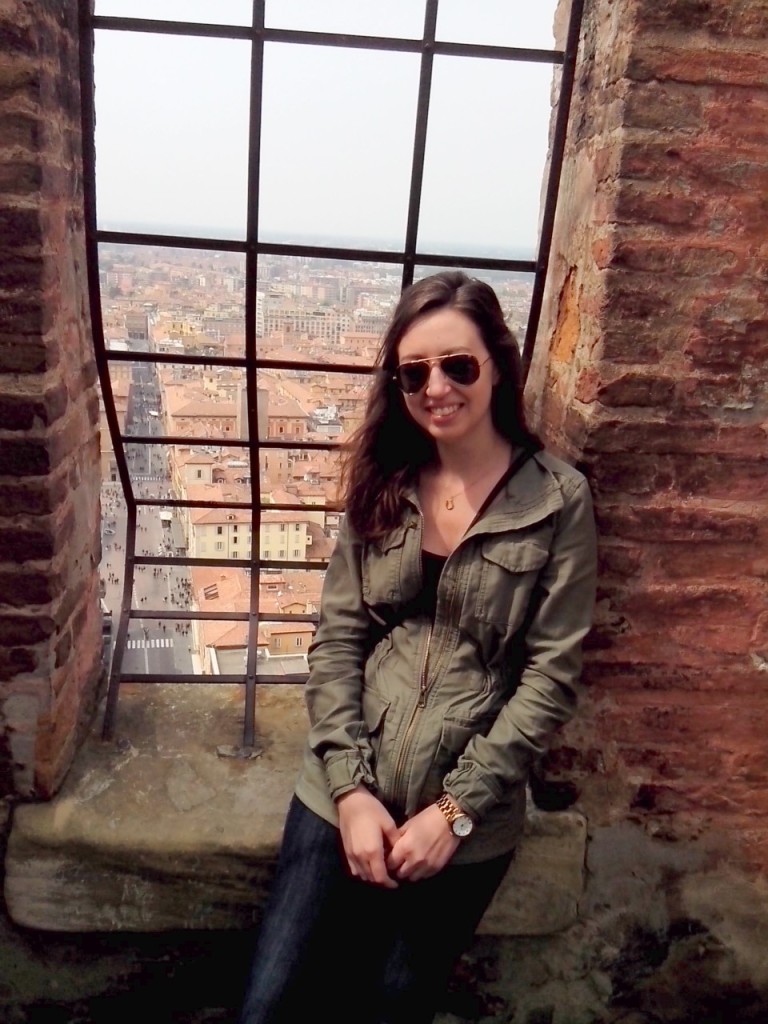 Emily is a 26-year-old red wine and travel enthusiast who currently resides in Washington D.C. She works in sales for a tech startup. Dancing in her room and cleansing her aura take up the majority of her spare time, but she’s also constantly on the hunt to find the best pizza in D.C. Her favorite day of the week is Sunday.