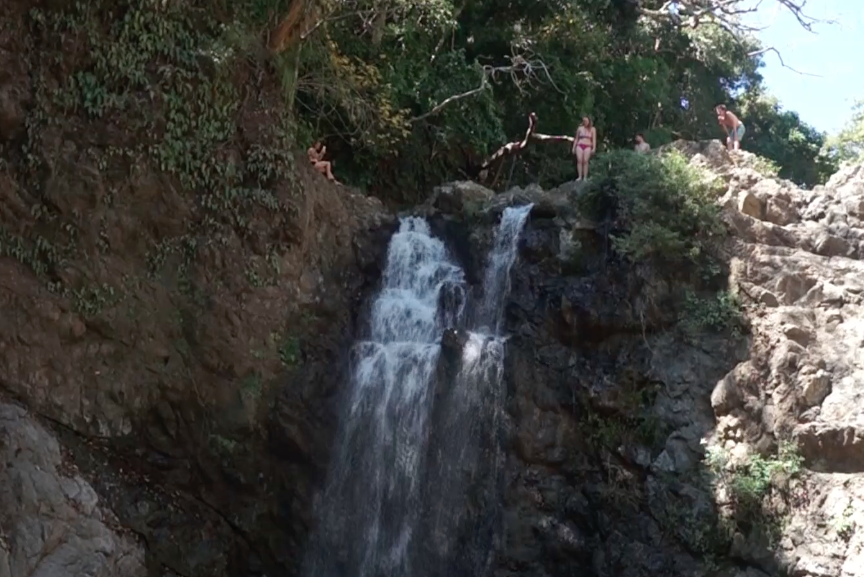 All through the past 14-months I’ve been living in Costa Rica the famed waterfalls of Montezuma have been for me but a dream of a thing — a bucket list item charged not with emotion but with simple ganas, as they say in Spanish, or a desire to see. But from my new vantage point, 50 feet above dark, swirling water, the magnitude of water’s power struck me at full force. 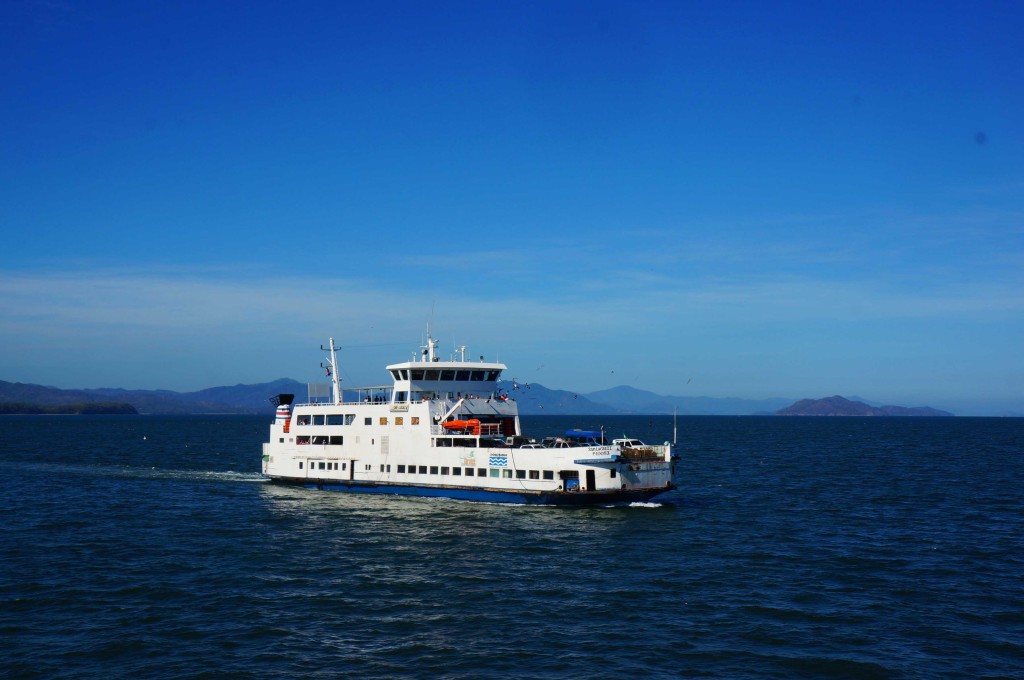 Montezuma is located on Costa Rica’s Nicoya Peninsula which is bordered by the Gulf of Nicoya and Pacific Ocean. From San Jose, traveling to Montezuma by public transportation is not a difficult journey, but it’s a long one. From the new bus terminal 7-10, you take a bus to Puntarenas. In this former fishing village you take a ferry across the Gulf of Nicoya to the town of Paquera. Once the cars, buses and pedestrians have unloaded, its onto a bus again to the town of Cóbano, where buses depart to the three main points of interest in the region – Malpais, Santa Teresa and Montezuma.

The journey takes a good six hours of travel – seven including the bus ride from my home in the rainforest of San Ramon de Tres Rios. It is because of this travel time that I was waiting for a long weekend to finally be able to visit. 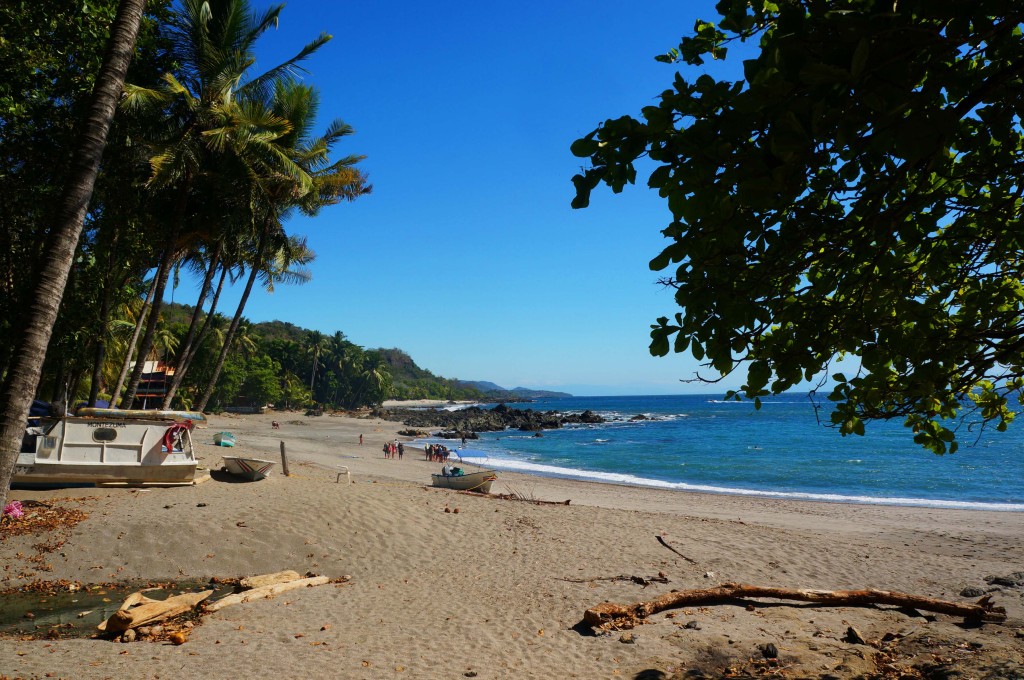 Once in Montezuma, the main attraction in this sleepy, ocean side town with a hippy vibe is the hike to Montezuma Falls. A trio of waterfalls make up Montezuma Falls, which are perhaps the most famous waterfalls in Costa Rica. (This is no easy feat in a country filled with hundreds of waterfalls.) The falls received further attention this past April when a video of Patriot’s quarterback Tom Brady jumping one of the falls went viral. Brady and his wife Giselle Bündchen own a home in the nearby town of Santa Teresa.

The first of the waterfalls, which is about a 20-minute hike from town is the tallest at 24-meters. The hike here has a slight incline and at times requires navigating over rocks, but is otherwise not too perilous. Do not attempt to hike in sandals, or barefoot, the terrain is too rocky for this and, if my observations of the one barefoot hiker I encountered are any indication of how such a hike would go for you, you will be miserable. 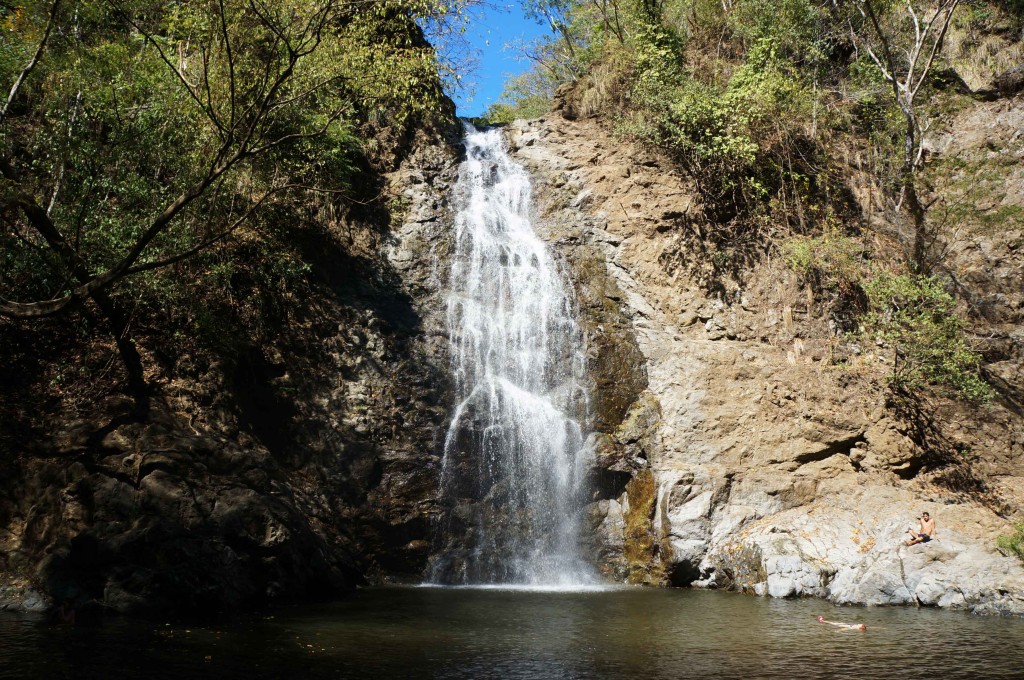 Since the hike to the first waterfall is the easiest and it has the largest pool for swimming, it is also the most crowded. Expect to be surrounded by tourists and locals alike spread out near the base picnicking, swimming and drinking. The first waterfall is not safe to jump — many tourists die each year attempting to do so, so just enjoy a swim here or the view and continue on if jumping off a waterfall is your aim for the day. 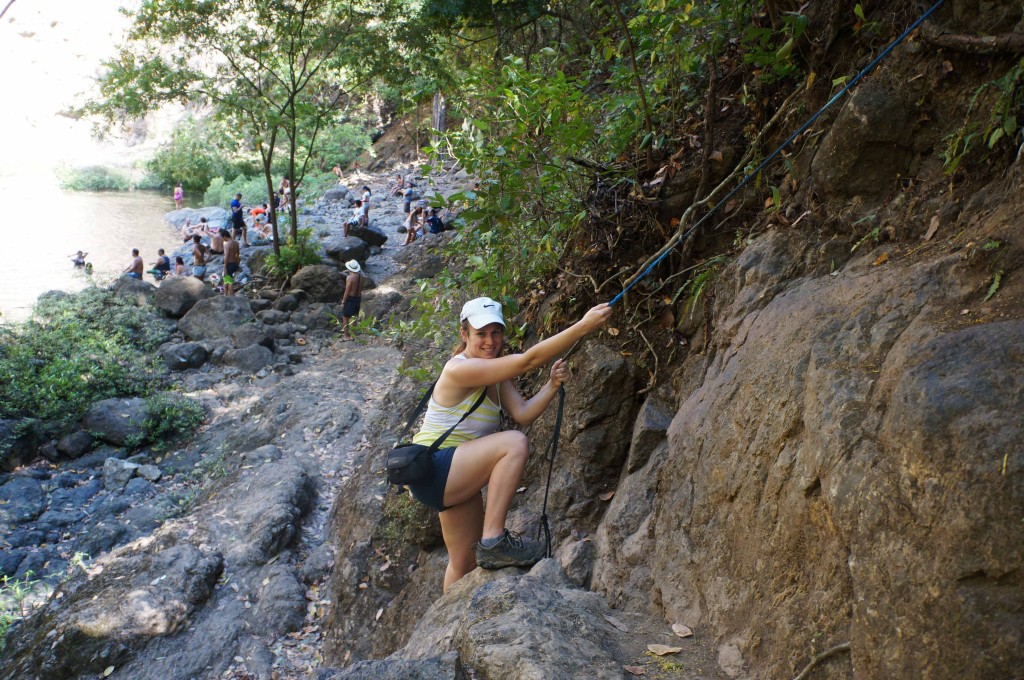 From the first waterfall, the terrain of the trail changes completely, making way for narrow paths up steep, muddy inclines. At times the trail is so perilous you have to use a rope for extra support or to swing across openings Indiana Jones style. The hike up to the second waterfall is hands-down the hardest short hike I’ve done in Costa Rica (but so worth it). 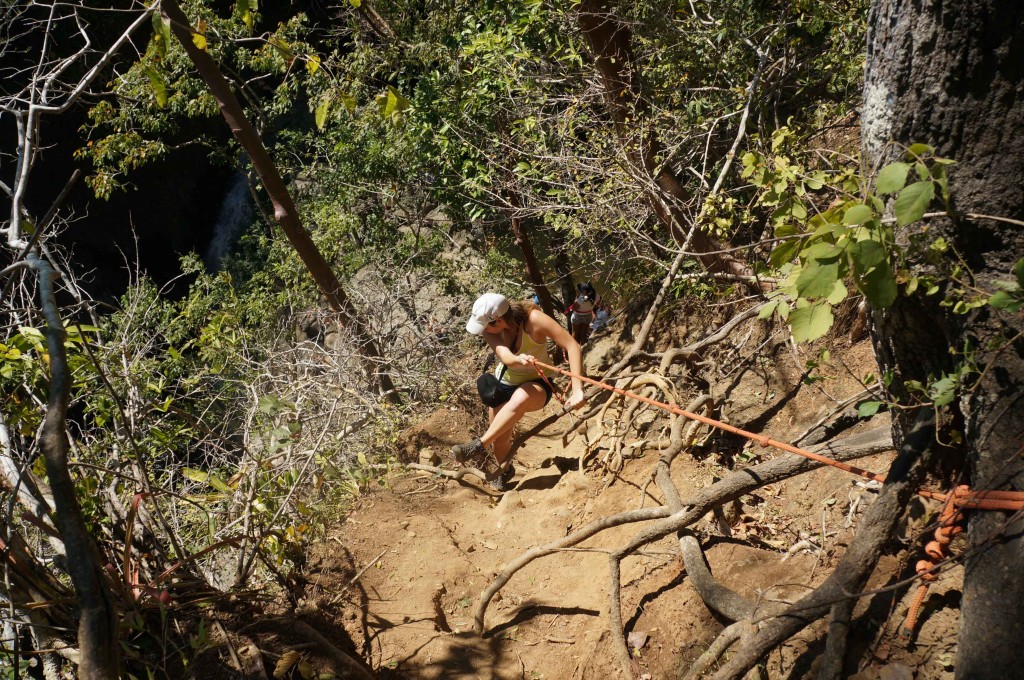 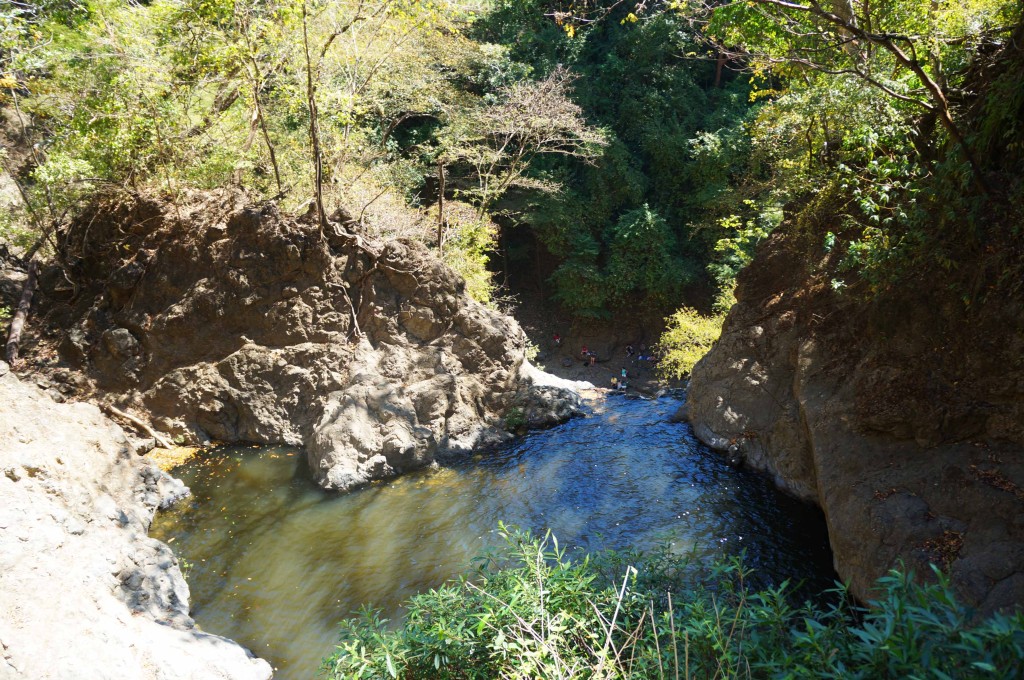 To get to the top of the third waterfall involves using a rope to do some more Indiana Jones-style swinging to make it across a thin ribbon of rock that passes for a trail. The view from the third waterfall is not as impressive as elsewhere along the trail, but there are fewer people up here, so it’s more tranquil. 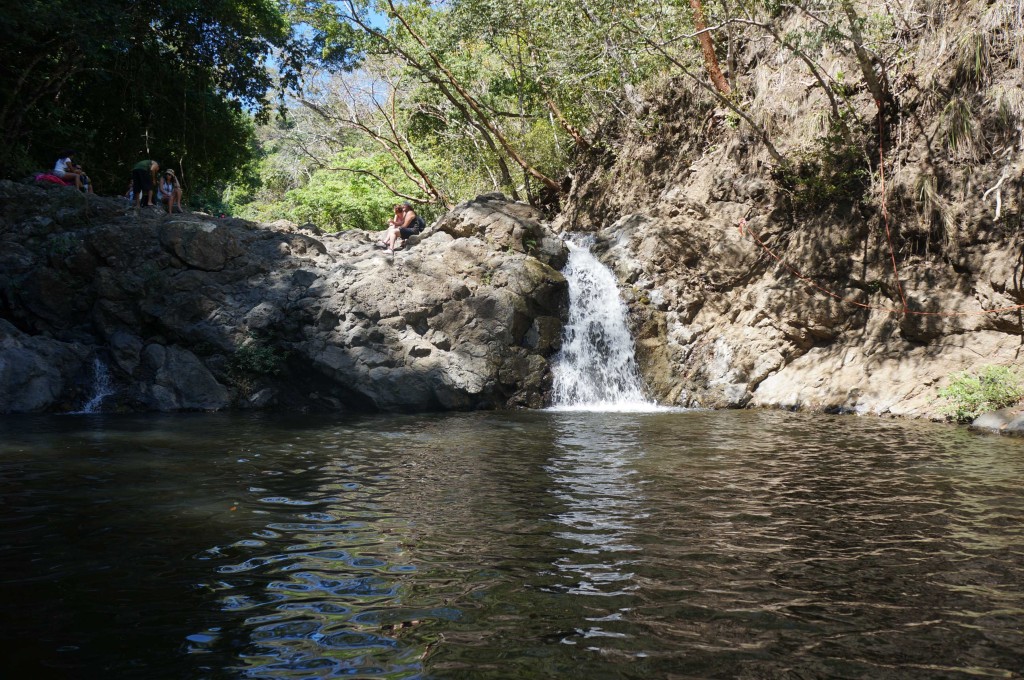 Though these first three waterfalls are all that comprise Montezuma Falls, there are some smaller falls if you follow the river further up. Keep on hiking and chances are you’ll find your own personal waterfall, just like I did! 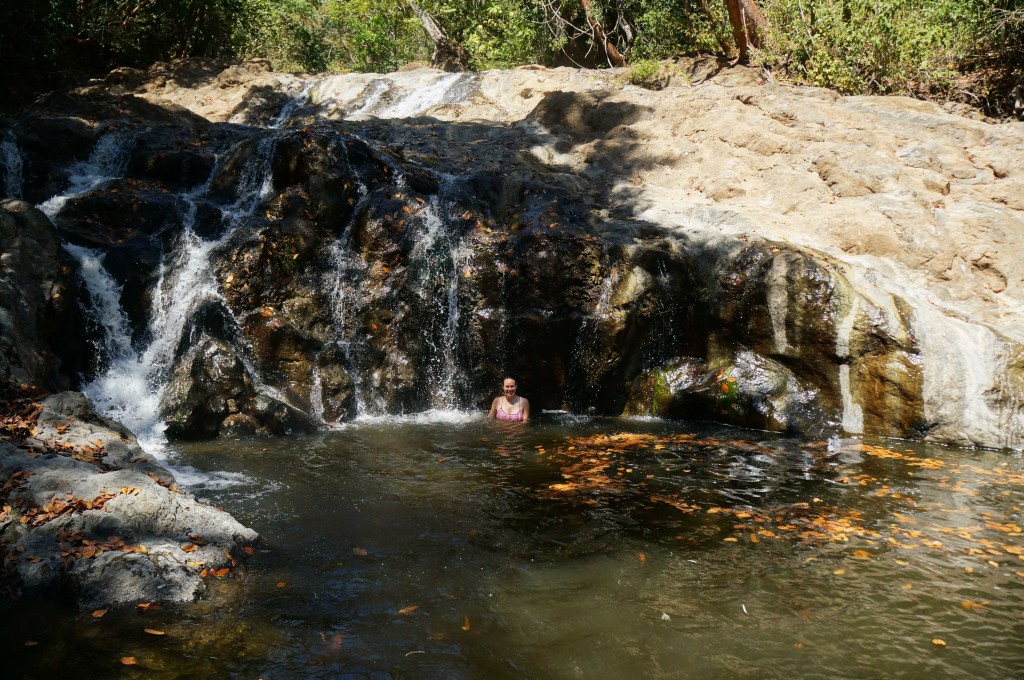 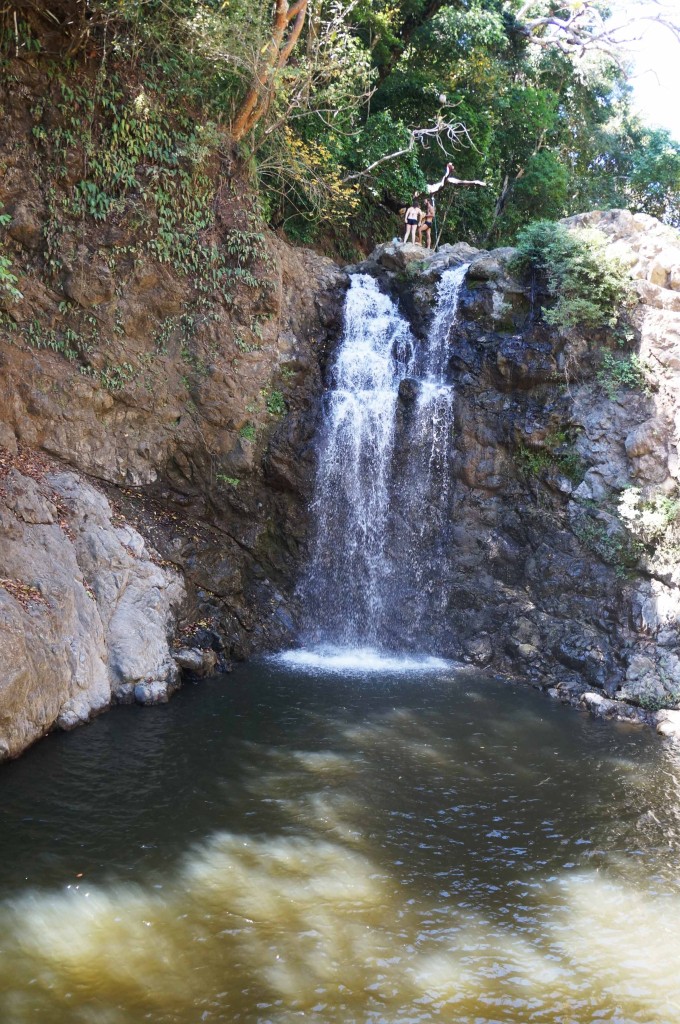 Prior to my trip I had made up my mind to do the same waterfall jump that Tom Brady did in April and jump from the top of the second waterfall into the large, deep pool of water below. This “must-do” Costa Rican travel experience has been on my bucket list for a while, and with my time in Central America rapidly approaching an end, I knew this might be my own chance to take the ultimate leap out of my comfort zone.

I’ve jumped off a few other waterfalls in Costa Rica and the past year has been filled with many adventures, so I didn’t think I would be nervous. But this waterfall in particular is 50 feet, making it a far more daunting adventure than any before. Standing atop the waterfall, looking down at the vast chasm of emptiness below, I became paralyzed with fear. My limbs started shaking and I couldn’t muster enough courage up to bend my knees and propel forward with my thighs.

I took a step back, inhaled a few deep breaths and asked  two young German men standing nearby who had jumped earlier for advice.

“Don’t jump until your absolutely ready,” one said, his tone kind and encouraging. “Then just spring yourself forward away from the rocks.”

“Don’t think too hard about it,” the other advised. “It is really scary but worth it.” 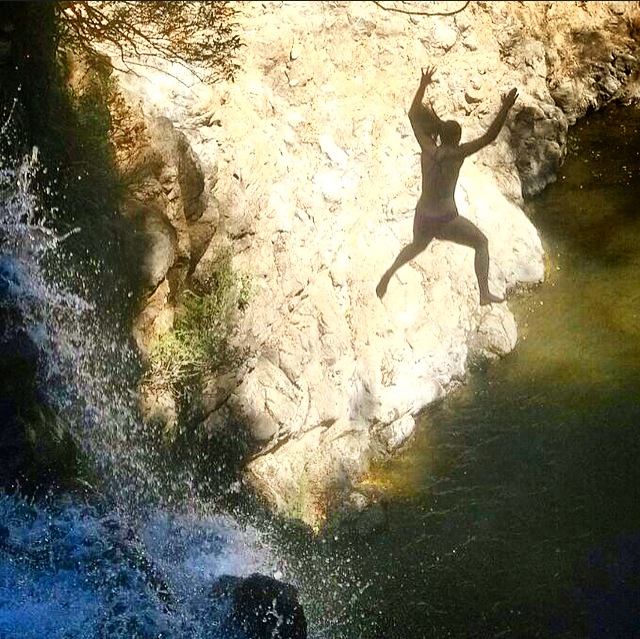 I stepped back up to the edge of the rock, took a few more deep breaths and somehow pushed off into the empty air. Away I flew, my body hurdling through the air in what felt like a slow motion descent. My body hit the water hard and down I sunk.

“So this is the meaning of pura vida,” I thought as I broke the surface and popped up into the bright sunlight, my veins pulsing with adrenaline.

The waterfalls of Montezuma spoke to me this day and taught me a powerful lesson that I hope to use as I plot my next  move in life — It’s okay to be afraid, but don’t let fear stop you from doing something that’s badass.

Thanks to the wonders of Youtube, you can watch me in all my glory below!

Would you jump off one of the waterfalls in Montezuma? Let me know your most daring travel story in the comments below!