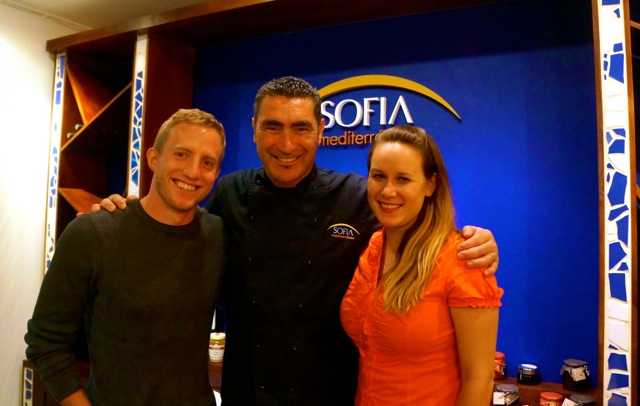 Located on Calle 33 in East San Jose, Restaurante Sofía Mediterráneo is in the heart of the upscale Barrio Escalante, an oasis of culinary delights in Costa Rica’s otherwise mostly bland capital dining scene. The brightly lit promenade, known as Paseo Gastronómico La Luz, has become in recent years the restaurant row of the neighborhood.

The tables at Restaurante Sofía Mediterráneo fill one by one on a Saturday night until all are occupied.

Waiters whisk menus, wine fills glasses, dishes touch tables, knives hit plates, forks enter mouths. At highest capacity, the dinning room waltzes gracefully to the melodious swirl of these gentle movements. Faint notes from a mandolin pipe in through the speakers and harmonize with the steady lull of conversation.

I look around the room and am struck by how engaged everyone is in the moment. My fellow travel writer Joe Baur and I are the only ones with iphones in sight (taking photos and notes for your reading pleasure of course). 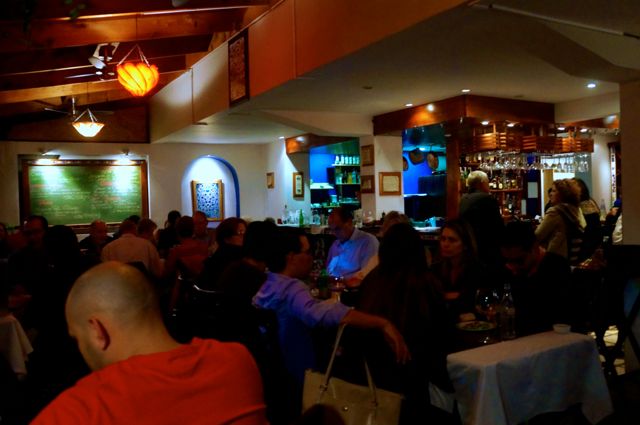 Hands gesture. Heads nod. Eyes lock. Laughter ripples through the room along with smiles, whispers and inflections. In a world where people often seem more interested in talking at one other than listening, here the art of conversation is alive and well.

Moving stories, bold dreams and deep secrets are being shared here tonight. I can feel it in the energy of the room and see it on the faces of the people around me. I long to know what quiet truths are being spoken aloud.

The front wall of the restaurant is lined with tables. Half of the top portion of the wall is decorated with multicolored panes and the other half is windowless, opening out into the night air. A soft breeze enters and I feel I could almost be in Greece, a place I admit I spend many hours dreaming I an at during recent nights when the rain pours, beating down hard and wet on the roof of my jungle home. 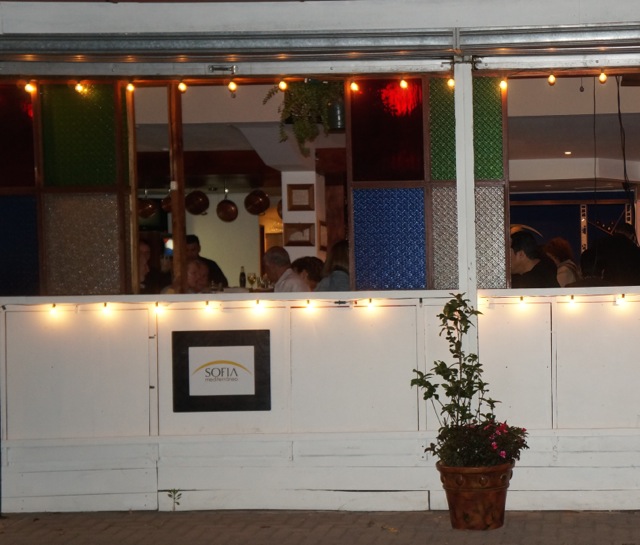 Restaurante Sofía Mediterráneo has dishes from more than 22 countries located on or near the Mediterranean coast.

“The Mediterranean is our reason of being,” reads the menu, “with a wider concept that doesn’t only include the food but also the health, the arts, the conversations and the friendships that are born in our table.”

Joe and I begin our meal with a plate of hummus, prepared in a Turkish style. 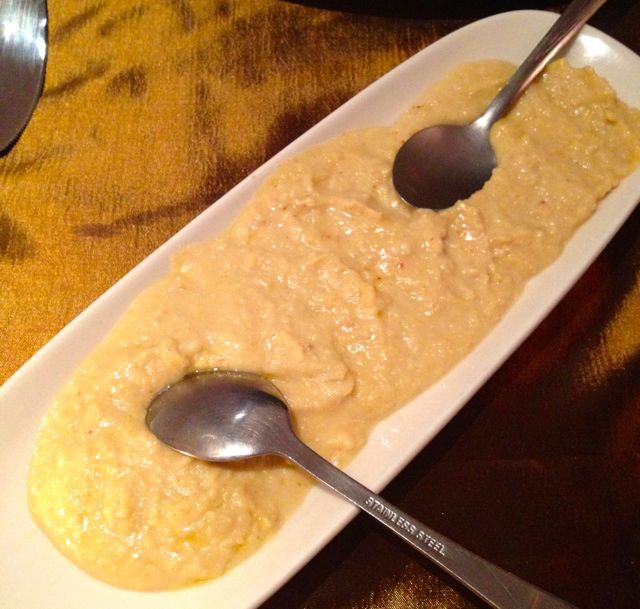 The restaurant is known for its lamb specialties and, in fact, the largest selection of lamb dishes in the country.

Joe and I seem to be in a vegetarian mood this night, however. I order the Indian plate, a dish of spiced vegetables and potatoes, and Joe orders spinach and ricotta tortellini. 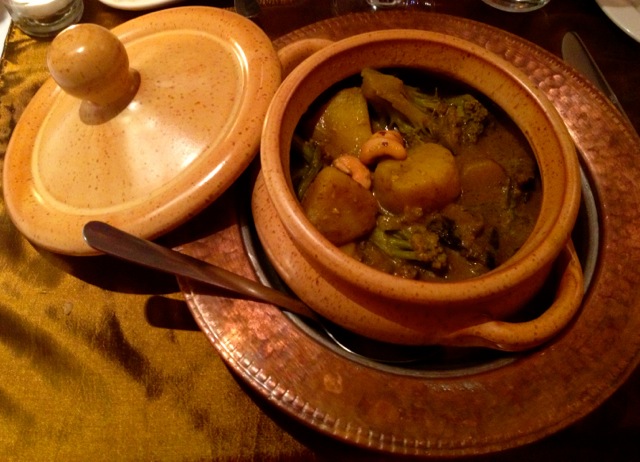 Both dishes are flavorful – a welcome change from the rice and beans that have made up most of my meals in Costa Rica.

A Conversation with Mehmet Onuralp

During our meal I have watched the restaurant’s principal chef, Mehmet Onuralp make his way around the restaurant, ensuring guest satisfaction as he moves between tables.

The tall and vibrant force of a man makes his way to our table and I can feel the night come alive as he pulls up a chair, sits down, and begins telling us his story.

Born and raised in Istanbul, Turkey, Mehmet moved to Germany as a young adult to work in restaurants. While living in Germany he traveled to Italy, Greece and Spain, garnering inspiration and new ideas for recipes from the various kitchens he visited.

While he enjoyed his life in Germany, he said he found the country a bit rigid. In search of a more spontaneous environment, he took a trip to Costa Rica in 1991.

“I didn’t know anything about Costa Rica except that it was famous for its environment,” he said. “I liked it because it is a small country but very diverse.”

During his vacation, Mehmet says he “fell in love” with Costa Rica. Upon returning to Germany he took a bold leap and left his stable job in Germany to move to Central America. Despite not speaking Spanish, he found a position in tourism and continued to pursue his passion for cooking by preparing meals for friends.

The Beginning of a New Restaurant

“My friends always told me I am a very good cook and should open a restaurant,” he said.

A few years ago, Mehmet did just that. Along with a group of friends, he opened a small sandwich bistro in the space where Restaurante Sofía Mediterráneo stands today. The bistro became so popular that there was a line out the door and down the street everyday. They doubled the amount of space, but even this was not enough to meet the demand of hungry customers. Eventually they expanded further and morphed into a table service restaurant.

The restaurant is named after the Santa Sofia temple in Istanbul. It was originally called Restaurante Santa Sofia, but the “santa” got dropped when Mehmet decided to broaden the menu to include dishes from more Mediterranean locals such as Greece, Spain and Italy.

Sofia means wisdom in Greek, which makes it a fitting name as there is much wisdom behind Mehmet’s recipes. 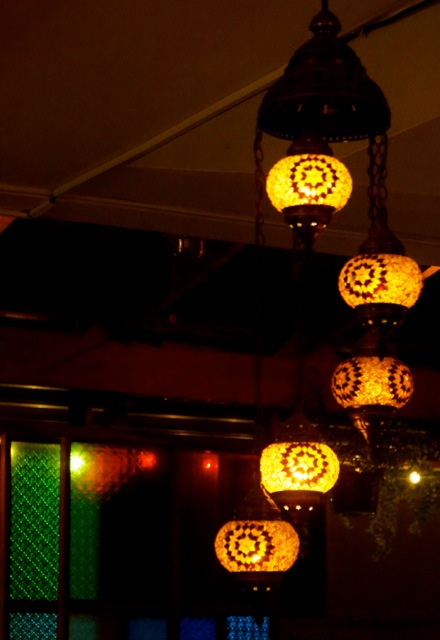 “Food is a relation between world countries,” he says, voice booming with passion. “It’s like music. There are no borders. You cannot say ‘this is my recipe.’ No. Recipes do not belong to an individual – they belong to humanity.

At Restaurante Sofía Mediterráneo, the emphasis is not on serving dishes from specific countries, but rather food that encompass the philosophies of the Mediterranean diet.

“Gastronomy is an art and a little bit of a science,” he adds. “People first put spices in food not for flavor but for medicinal purposes. Food is part of your health. We forgot this – everything in our food has health effects.”

In addition to a routine menu, every few months the restaurant is also home to special events centered on a unique culinary theme or country. Recent themes have included Bulgaria, Iran and Egypt.

The restaurant is one of six establishments in Barrio Escalante that belong to a newly developed culinary association dedicating to improving the atmosphere and culinary level of the neighborhood. The association has recently come together to improve lighting along Calle 33, commission artists to paint a mural and produce a gourmet food festival, the first of its kind in Costa Rica.

“We don’t have to compete,” Mehmet says, explaining how in the greatest cities of the world such as Rome and Istanbul the greatest restaurants are all gathered in the same area.

“Our goal is to share gastronomy with the world in harmony. We can work together to make our food the best,” he adds. 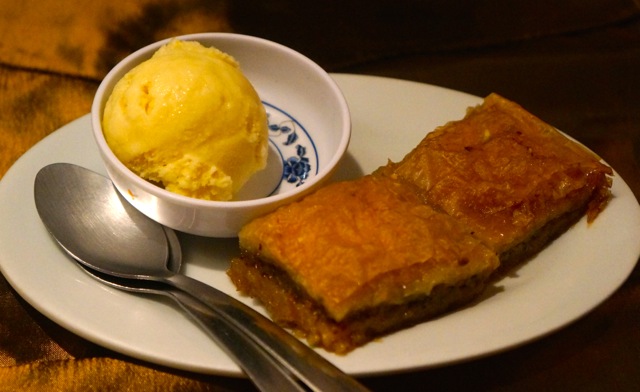 Baklava as a Metaphor

Mehmet brings Baklava to our table and, after a spoonful of the crisp and gooey deliciousness, I ask if Baklava is from Mehmet’s home country of Turkey.

I can tell by now that the grin formed on Mehmet’s face denotes the answer to my question is not so simple.

He explains that, while we now generally associate Baklava as a Turkish dish, it actually hails from Syria. And Syria was once Mesopotamia, which was once part of the Babylonian Empire.

“Food doesn’t ever come from one place,” he explains. “It is a fusion. Recipes are always a synthesis.”

By the end of the evening I am no sure what I have enjoyed more – the restaurant’s food or our conversation with Mehmet. I tell him his passion inspires me.

“It is important to have passion,” Mehmet urges. “Without passion you cannot cook. Cooking is hard work. It is work you can only do with heart.

The conversation wins for sure.

Note: I was provided with a complimentary meal at Restaurante Sofía Mediterráneo. However, all thoughts and opinions are my own. All quotes have been translated from Spanish.