Our feet glide across the blue cobblestone streets of Old San Juan as we follow Natalia, a guide with Flavors of San Juan Food and Culture Tours, on an afternoon deep-dive into Puerto Rico’s history and cuisine. Smiles form across the faces of all members of my family as we reach our first stop and learn our journey will begin with a piña colada laced with country’s famous Don Q gold rum. We are in for a flavorful afternoon indeed! 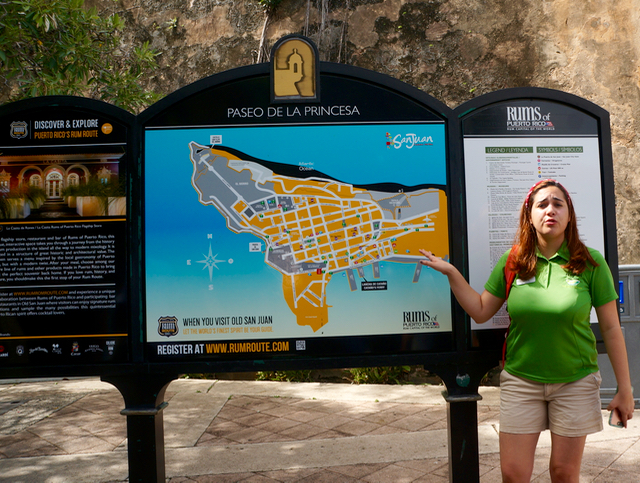 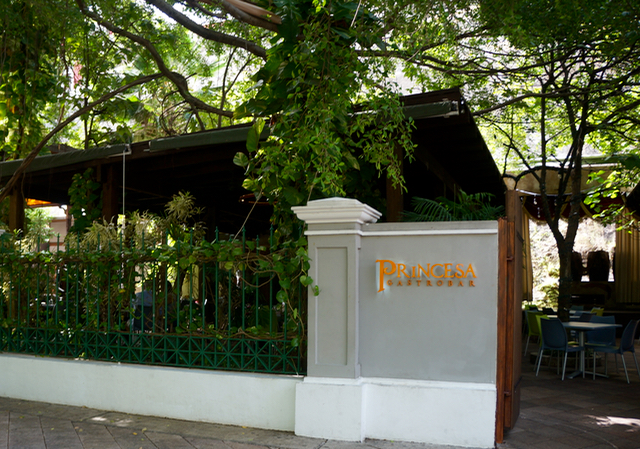 At Princesa Gastrobar our tour provides us with VIP status, and we take a step behind the bar at this posh outdoor eatery set along Paseo Princesa, a pedestrian street modeled after Las Ramblas in Barcelona. The bartender gives us a tutorial on the many rums produced on the island that are sanctioned by Rums of Puerto Rico, a government entity that controls liquor quality.

The piña colada was invented in San Juan in the 1950’s at Beachcomber’s Bar, an establishment frequented by Hollywood jetsetters. Natalia explains that the beverage was designed to “keep them coming.” My entire family agrees that the piña colada served is is the best we’ve experienced anywhere in the world, marked by a distinctive creaminess. My brother Sean will follow the bartender’s recommendation the rest of the trip and order Don Q gold rum the rest of our time on the island.

The drink is served alongside two appetizers. The croquettes that use the same recipe as Botin in Madrid, the world’s oldest restaurant and one of my personal favorites in Spain. The lightly battered fried eggplant topped with chicken stew and brown sugar is a historical dish that comes from a Puerto Rican recipe book dating back to the 1800’s. 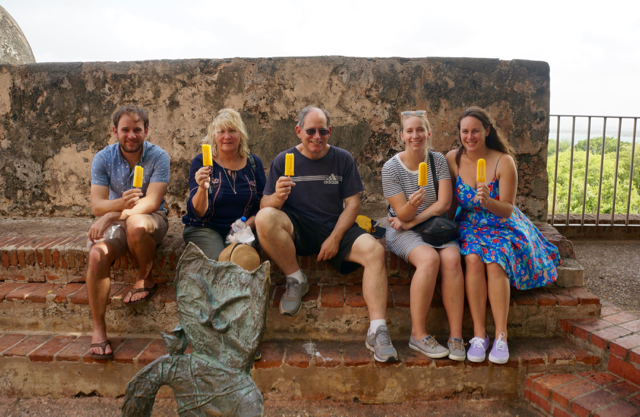 A crowd of locals is pouring out of the building that is home to Señor Paleta, a new artisanal popsicle shop that is clearly all the rage in Old San Juan.

Natalia brings us a popsicle each in the flavor of the month – passion fruit – which we enjoy atop the wall of Old San Juan. As we lick the juicy, fruity flavor, Natalia details the history of Puerto Rico’s oldest settlement. San Juan was founded in 1521, making it one of the oldest Spanish settlements in the Americas. The walls we stand on today took more than 150 years to build, consisting of an outer layer of brick and a hollow core to prevent total destruction should a cannon ball strike. 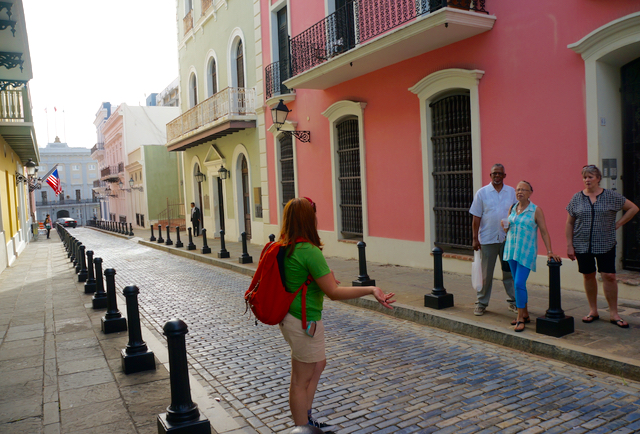 Our third stop takes us to a local art gallery and eatery. Here we sample acapoyio, a street dish consisting of fried yucca, sweet potato and plantains filled with beef. Ceviche, a Latin American specialty of grouper fish soaked in fresh lime juice comes next. For those of us who aren’t lovers of seafood, we enjoy a fresh caprese salad with mozzarella and tomatoes.

The gallery provides an idyllic spot to learn about the island’s local art scene and the history of vejigantes, folklore characters who are impersonated with bright masks during festivals.

At this point in the afternoon we are beginning to feel full, so we take a break from eating and visit La Fortaleza, a UNESCO World Heritage site that is the longest continuously used Governor’s Mansion in the Western Hemisphere. Puerto Rico doesn’t have its own President as it is a commonwealth of the United States. The highest ranking position on the island is that of the governor who resides here. 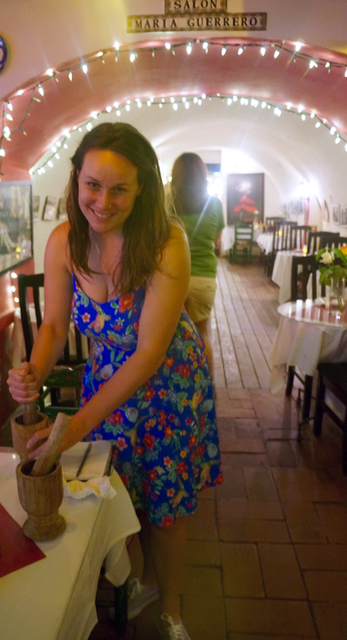 At a small Spanish eatery housed in the dungeon of a former courthouse, we mash plantains, garlic and butter to prepare mofongo, Puerto Rico’s most iconic dish. Using a motor we mash the mixture in a wooden pilon, a dish resembling a chaise, and then cover this base in a stew of chicken, vegetables and a tomato based sauce.

My family’s thoughts on the rice and pink beans served as a side are again unanimous; they are the best rice and beans we all have enjoyed in memory. 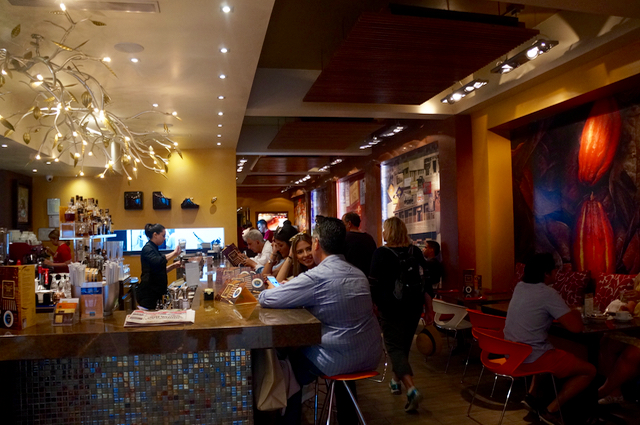 Our final stop of the day, Casa Cortes Choco Bar, also proves to be a family favorite. Founded in the 1920’s, this chocolate company has long been satiating Puerto Rico’s sweet tooth. Chocolate bars were originally sold alongside story books, so it is a local legend that the chocolate taught many Puerto Ricans how to read.

Here we enjoy a portion of a chocolate bar and dip churros into hot chocolate. In local tradition we drop a slice of cheddar cheese into the chocolatey mixture. Natalia explains that as the price of chocolate is low, may families would serve cocoa as a meal. To make it hardier they would add in a slice of cheese. 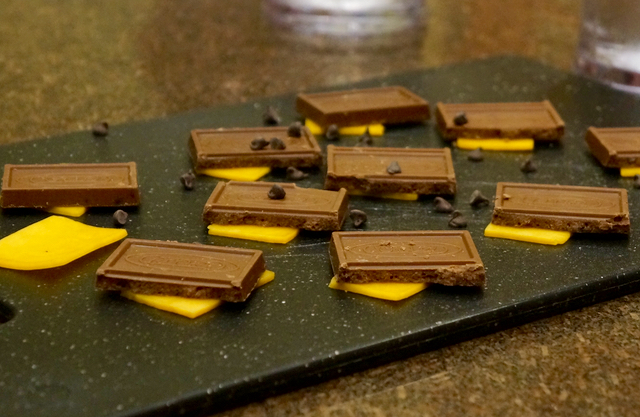 “I think all who take this tour should get a shirt that reads I dropped the cheese in Puerto Rico,” jokes Natalia as our tour concludes.

With Flavors of San Juan Food and Culture Tours, my family and I dropped the cheese in Puerto Rico indeed, and we enjoyed it immensely.

Note: I received a discount on a tour. However, all thoughts and opinions are my own.

All Posts »
PrevPreviousVisiting Puerto Rico: Ramblings on the Island of Enchantment
NextA Visit to Koyasan and Mount Fuji in JapanNext