A Salty Soak and Sunset at Laguna Cejar in Chile

The languid ripples of Laguna Cejar tiptoe to shore and gently retreat, leaving in their wake wisps of salty foam that rest on the sand like piles of cotton candy, frothy and white.

Caramel waters ebb into turquoise and then a deeper blue, colors made more brilliant by the pearly strand of earth that circles the lake and yellow of grasses and purple of mountains that call further in the distance.

Though this is the driest desert in the world, its winter in Chile and a light wind ruffles through the air, bringing a slight chill to the landscape. On the embarkment a thatched hut stands, promising shelter from the cold. As I walk through spongy spools of salt and remove my flip flops, its presence reminds me that my feet are sinking into ancient land. 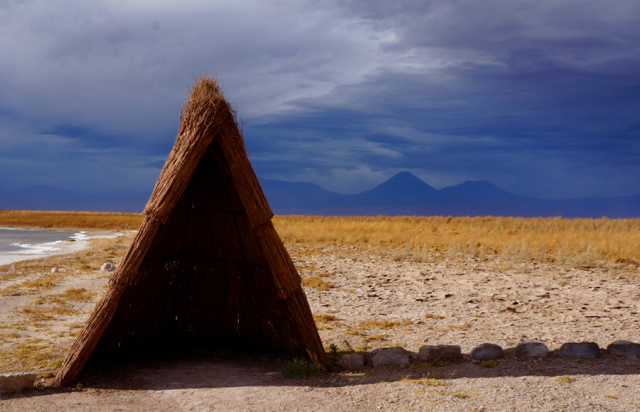 Laguna Cejar is not technically a lake, but rather a large sinkhole, located in the salt flats of the Atacama Desert. The waters here have a salt concentration of 20%, rivaling the Dead Sea. A combined visit to Lagunas Cejar and Tebinquinche is one of the more popular tours that depart from San Pedro de Atacama, a small Chilean town that serves as the gateway to the desert’s many stunning landscapes.

I stare out at these landscapes alone, or at least far away enough from the other members of my tour group for me to feel alone. 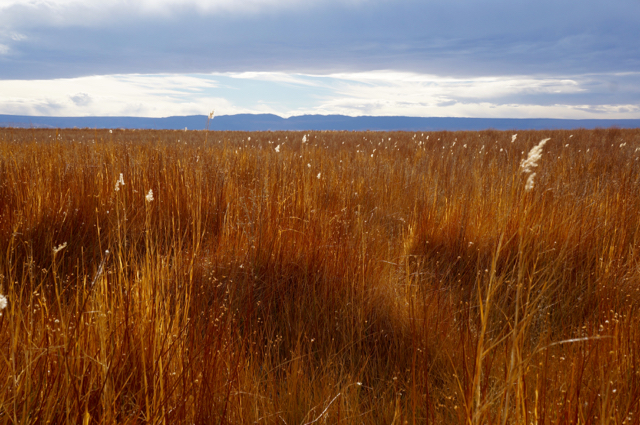 “Traveling alone, oh I would never do that, it would be way too lonely,” a man recently told me on a flight from Las Vegas to Los Angeles upon hearing about my adventures in solo travel.

“Oh no, traveling solo is great,” I contended. “It’s easy to meet people and even if I start out solo I almost never end up alone when I travel.”

I meant these words when I said them, but on this wintry day in South America they couldn’t be further from the truth. Wanting to enjoy every last potential moment with new friends in Santiago, I traded in a night of sleep for a night of dancing and danced on through the night until 4 a.m., departing just in time to head to the airport for my 6 a.m. flight.

Such behavior is extremely atypical of me and my old soul, even more so after living in the jungle for a year and a half where there was nothing to do after sunset. The lack of sleep combined with the aroma of cat urine that awaited me at my hostal in San Pedro, left me in a rather salty mood upon my arrival. 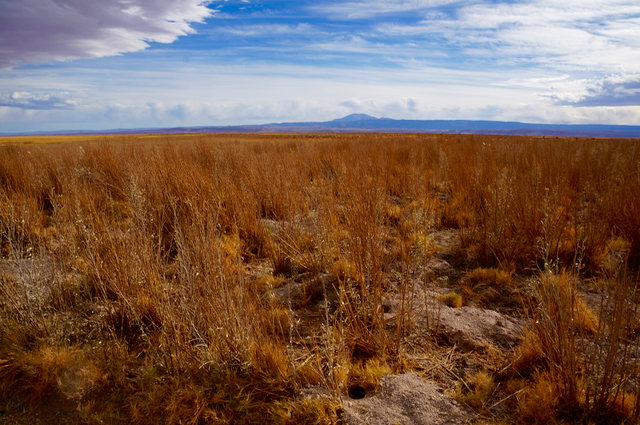 I checked into my room and took a two hour nap, forcing myself to wake up again and take advantage of my less than 72 hours in this region of the world. Of the afternoon tours available this day Laguna Cejar stood out to me the most, if for no other reason that it promised a relaxing swim in salt water.

In such an antisocial mood I was pleased when it turned out that all the other members of my tour group were native Spanish or Portuguese speakers. With no other gringo in the bunch I settled in to a corner on the bus, played my “I don’t speak Spanish” card and stared out the landscapes in silence. 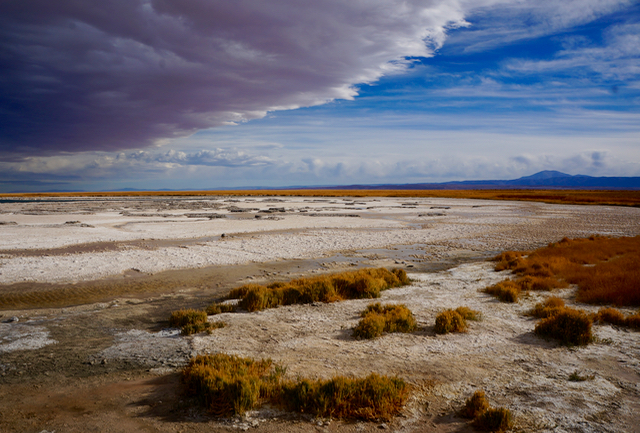 I stand now at the shore, purposefully alone. As I stare out at the rich colors a Spanish couple approaches me and asks me to take their photo. They are from Madrid and as they smile for the camera I remember how much I loved living in Spain, how my time there opened my eyes up to the world, and a bit of my saltiness fades away.

Just as I don’t normally dance until the wee hours of the morning I also don’t usually go swimming in lakes in winter, but travel is a time to do those things you don’t normally do, and so I strip down to my bathing suit and wade into the water. Its cold, but considering it is the middle of winter in South America I was not as cold as I had expected it to be. I swim out, floating in the salt. 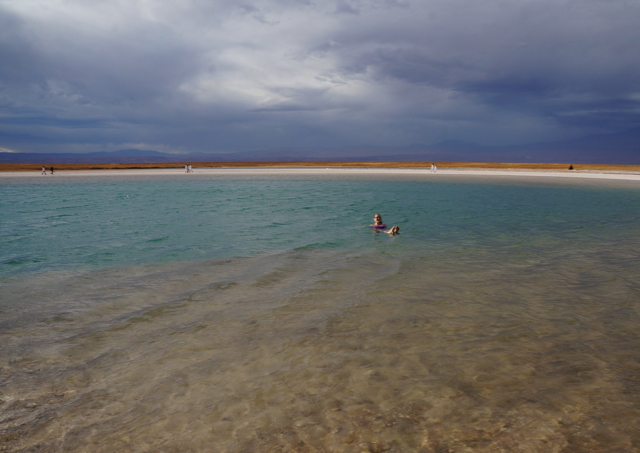 There are a few others swimming but soon they depart and I am alone. I splash around, and as the beauty of the moment, of being completely alone in a giant sinkhole in the Atacama Desert sinks in, more of my saltiness soaks away. 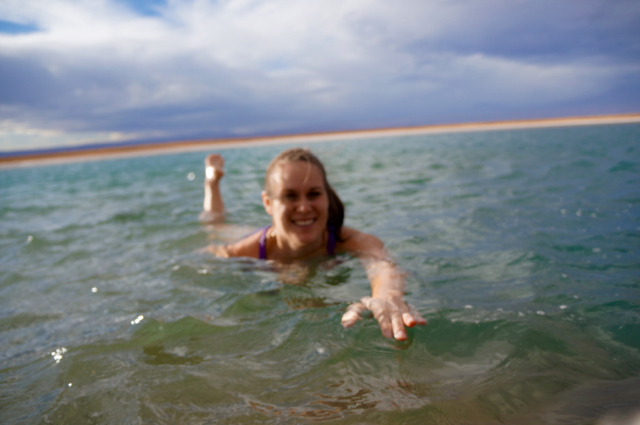 We head back on the bus and journey toward Laguna Tebinquinche, another salt lagoon in the region that is famous for the array of colors that arise here at sunset.

We walk around the lake and this time I stay with the group, listening to our guide as he talks about the history of the geological formations before us. I don’t feel salty anymore, just quiet. 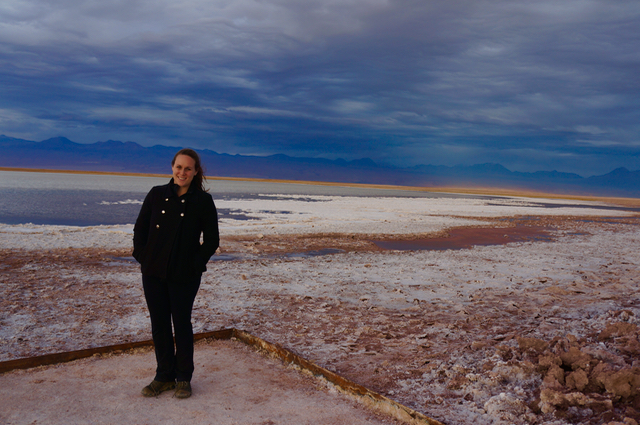 As the sun sinks lower in the sky the temperature drops and I bundle up in every layer I have with me. Sunset at Laguna Tebinquinche is the most stunning of all. Brilliant pinks and reds fill the sky and the sun burns bright and orange over the lake. 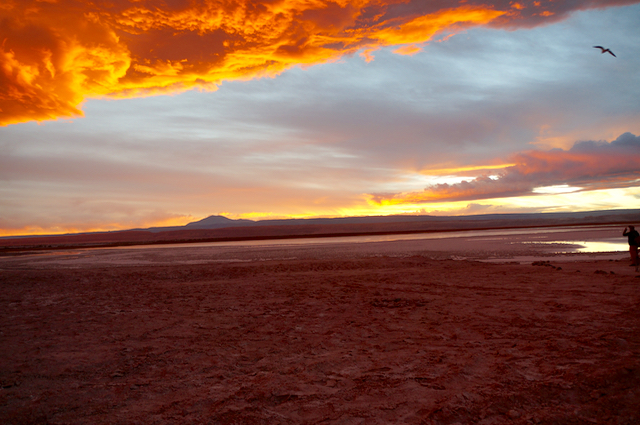 Our group enjoys a glass of wine and cheese near the bus but I wander away, again seeking solitude. Enveloped in a sea of clouds and colors I look out at the sky and think of a man I met a few days before in a now distant country. I hum, spilling unvoiced words into the universe.

Standing in a nice dress, staring at the sunset babe. 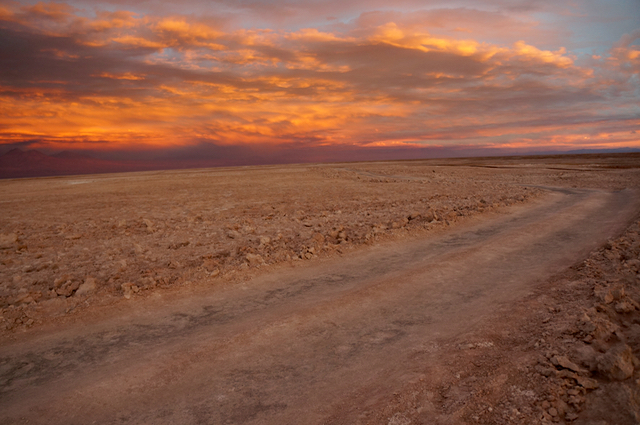