A sea of trees chases a gaggle of hills before culminating at the base of a majestic castle, yellow, red and white towers breaking up the unending blue of the sky. Beyond lies the Portugal plain, stretching on for miles, ending on at the ocean to the South and at Lisbon’s city scramble to the East. 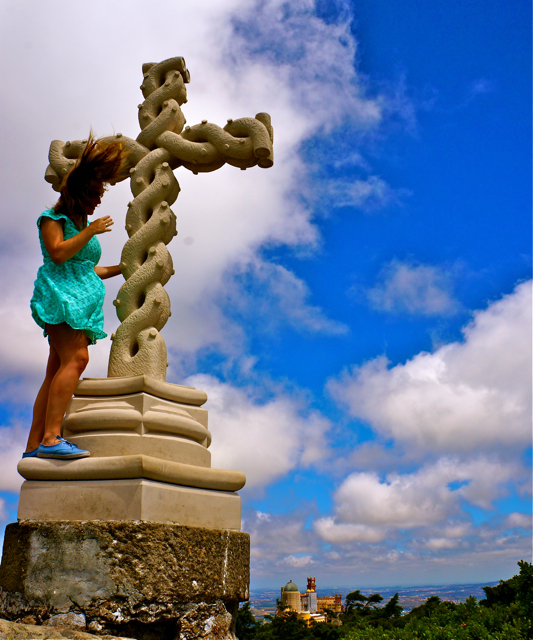 A large stone cross juts out from a boulder, as if marking the landscape with a signature from God, the only interruption to the scene before me. Apart from the echoes of the wind as it tosses my hair about in a mad frenzy, the scene is silent.

Cruz Alta Cross, with its carved intertwined branches, marks the highest point of the Sintra hills, a lush region less than an hour from Portugal’s capital.

A former summer retreat for Portugal’s royalty, the town of Sintra is home to an enchanting mix of palaces, castles, green parks and hiking trails. Commonly billed as a day trip from Lisbon, the land here is so immense it would seemingly take a Lord of the Rings-esque journey, or at least several days, to thoroughly explore the terrain. 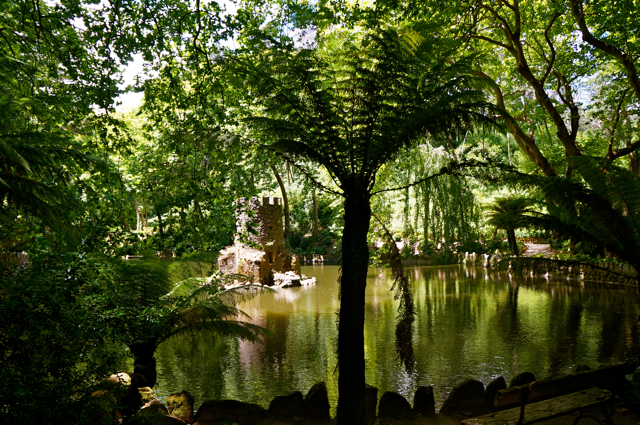 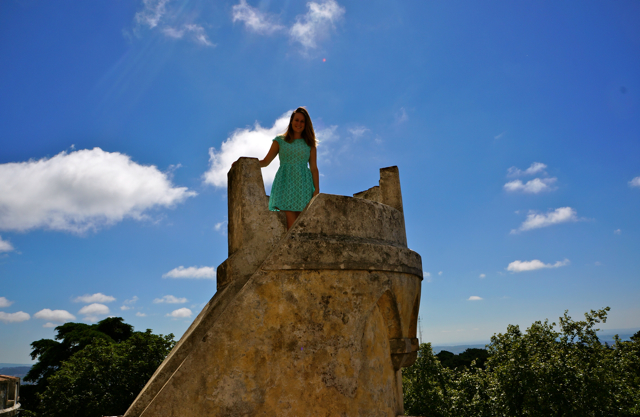 The first main attraction as the bus climbs the steep slope is Palácio Nacional. Built from 1385- 1433, it is the oldest surviving palace in Portugal. Destruction following the fall of the Portuguese Monarchy in 1910 left the palace largely damaged, and, if pressed for time, this is palace to skip. 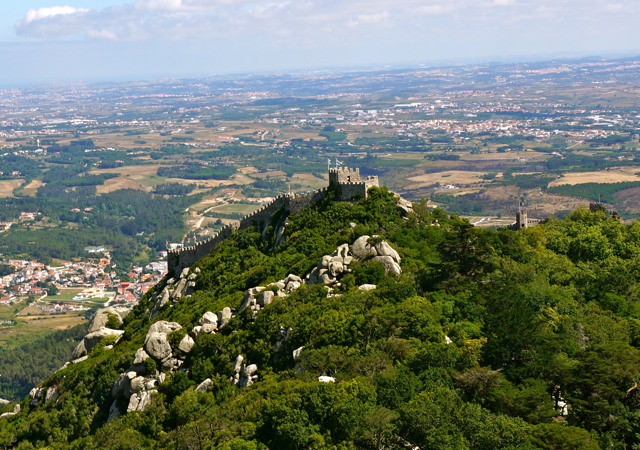 Wind further up the hills to Castelo dos Mouros, the “Castle of the Moors.” The Moors lived and ruled in Portugal and the majority of the Iberian Peninsula after the fall of the Roman Empire in the 700’s until the 12th century. The medieval castle was constructed for defense purposes during the Reconquista, a period when Christian rulers tried to overthrow the Islamic Moors. Wander along the inner walls of the castle for stunning vistas of the Sintra-Cascias Natural Park. 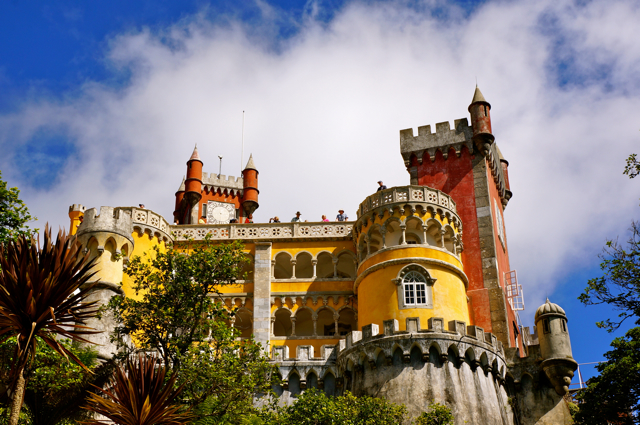 Atop of the hills is Palácio da Pena, situated in the heart of the Park of Pena. This whimsical palace is the main attraction in Sintra, and it takes only a step through the fanciful gates to understand why. 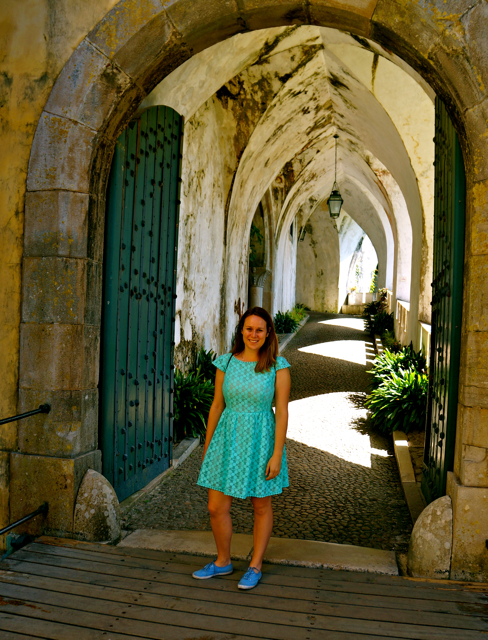 A jewel of Portuguese Romanticism architecture, the palace was intentionally constructed using a wide variety of eclectic styles. 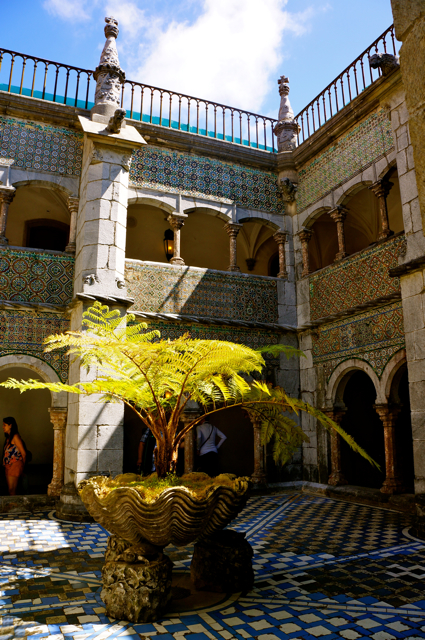 The result is different feelings are evoked around every curve. Construction of the current palace was completed in 1854. The last royal to live here was Don Manuel II who reigned from 1908 until the fall of the monarchy in 1910. 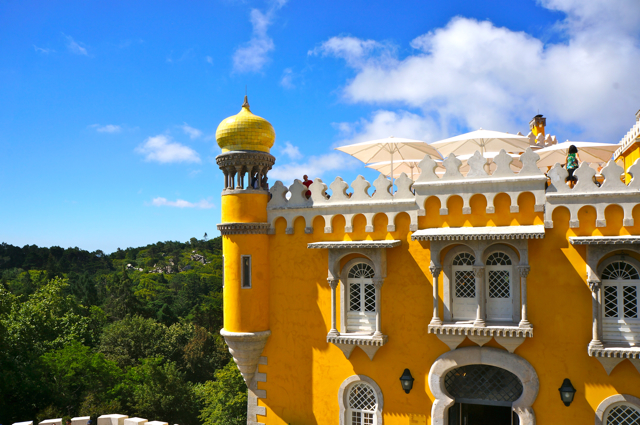 The palace is part of a vast park which size should not be underestimated.  The park is so big there is the option to take a shuttle from the front gates to the palace. Wander through looming trees and past babbling brooks to discover the park’s many enchanting offerings such as a waterwheel, warrior statue, ancient grotto used by monks and a fern valley. The Cruz Alta Cross is at the edge of the Northern edge of the park. There’s a magical presence in these woodlands. Can you feel it? 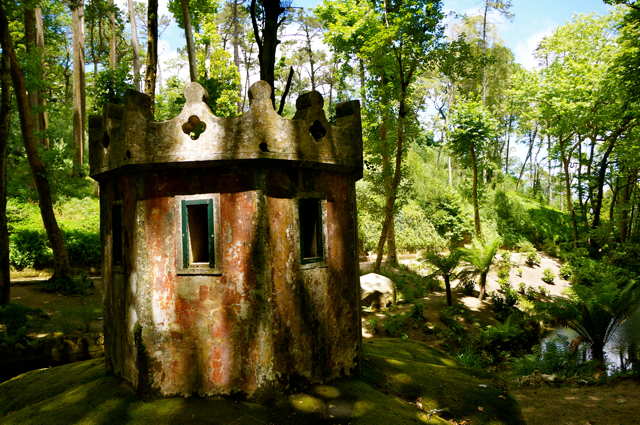 Note: I received complimentary admission to the Park of Pena. However, all thoughts and opinions are my own.

All Posts »
PrevPreviousDine with Mamma at Home Lisbon Hostel
NextMontpellier Now! Five Reasons to Visit Montpellier on Your France TripNext