Acropolis Views and Ancient Wonders: The Best of Athens in a Day

Twelve hours. That’s all the time I had to explore the highlights of Athens on my recent trip to Greece. Of course this ancient city is worthy of far more of a traveler’s time, but time is a luxury I’ve rarely had as I’ve trekked through the world, and on this trip I chose to zip through Athens so I could spend more time slowing down with a friend in a small town in the North of the country instead.

To be an efficient traveler, it’s important to know when to be independent and when to ask for an expert’s help. Athens is a large city and the highlights are spread out. To see everything using public transportation would be manageable, but I knew that this was a case where having a private guide was worth the investment to help me maximize my limited time. 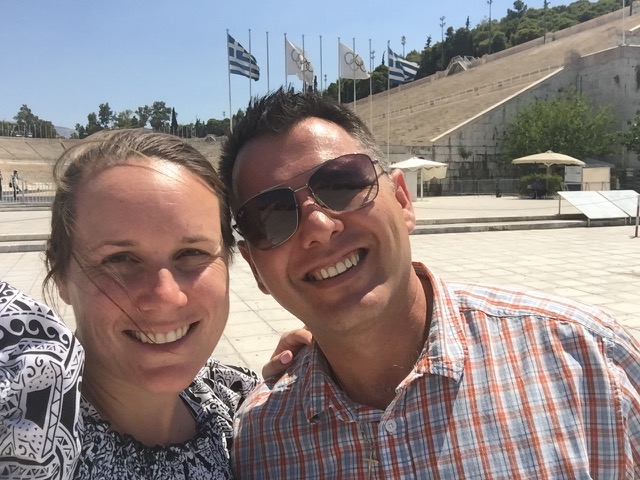 A few years ago, Greece was a dream that helped me get through the slogs of life in the rainforest in Costa Rica. I started researching the destination more and came across Yannis Varsakis, a taxi driver and private tour guide in Athens. Over the years we tweeted back and forth about travel, and I’ve seen smiling face after smiling face on his Facebook Page, so when my time finally came to visit Athens, I knew I’d be spending the day with Yannis. Here’s a peak at the highlights of Athens I was able to explore in a day. 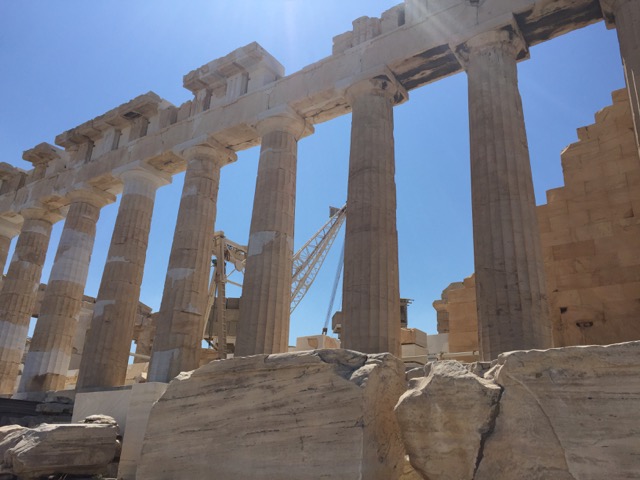 The dominant feature and most important site in Athens is the Acropolis, an ancient complex of temples that sits on a high rocky outcrop in the center of the city. If you watched the Olympics in 2004, you no doubt saw this stunning temple in the opening credits of the nightly broadcast on NBC.

It was very hot during my visit – temperatures rose above 100 degrees, and the Acropolis was crawling with tourists. Because of this it was a bit difficult to really take in the beauty and meaning of this ancient monument. However, Yannis clued me in on a secret – the first theater in the world is also on site here, and it is less visited. On my climb up the hill I stopped off at a lookout point overlooking the theater and felt chills run down my spine. Greece invented so many things, and here was one of them – the first theater ever. 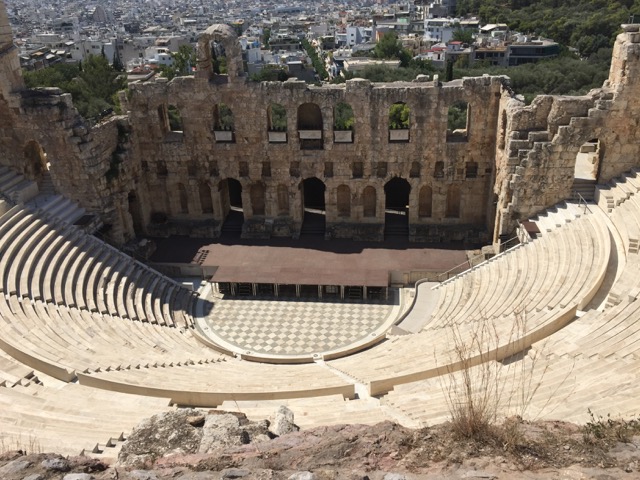 Yannis knew a few other secrets in the area as well. After my descent we left the throngs of tour buses behind and walked through a park, passing the jail where Socrates (yes, the Socrates) was jailed and then forced to drink poison and died. We then walked to where democracy was invented, a hill called Pnyx that looks up at the Acropolis. Here Athenians would meet as early as 507 BC to discuss political matters and vote, thus making it the birthplace of democracy.

It’s so mind blowing to think that so many concepts we take for granted today all stemmed from brilliant minds of ancient Greece who congregated right here in Athens.

Nearby the Acropolis Museum is an essential stop for visitors looking to understand these ancient wonders. (It also has air conditioning making it a much appreciated stop during a heat wave).

This museum contains archeological findings from the site of the Acropolis as well as replicas of statues and other monuments that now sit in museums around the world. Perhaps the coolest feature of the museum is the glass floor that reveals the slopes of the Acropolis. 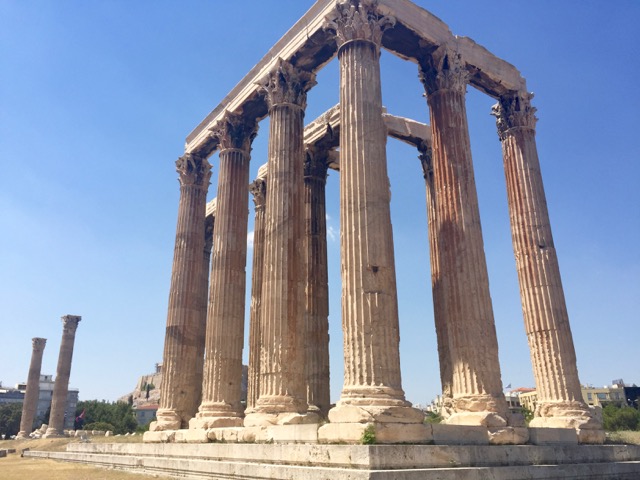 The thunder god Zeus was ruler of the Olympic gods and known as “father of the gods and of men.”

Several columns of the 5th century BC temple dedicated to him remain standing in the center of Athens. It remains a mystery how exactly such large and imposing columns were constructed so many years ago. Standing before them the architectural wonder is all more impressive. The Temple of Zeus has gorgeous views of the Acropolis behind it as well.

The Panathenaic Stadium was used in the 1896 games for opening ceremonies and other competitions. It also was used in the 2004 games and is the finish line for the Athens Marathon. It is the only stadium in the world built entirely out of marble.

Parliament & Changing of the Guard 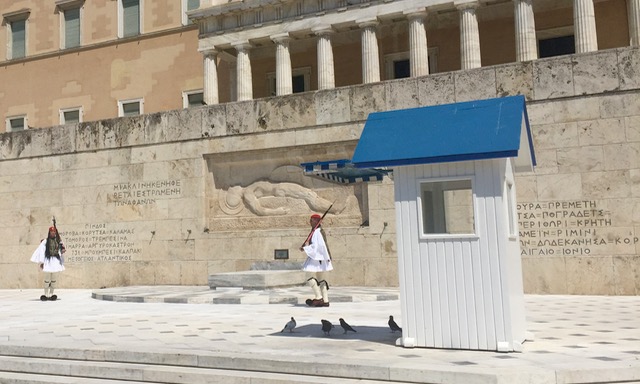 I knew I was very spoiled to be spending the day with Yannis when we pulled up in front of Parliament just as the changing of the guard ceremony was set to begin. Thanks to his strategic planning and expert knowledge of the city I didn’t have to spend much time waiting in the heat.

Soldiers of the Presidential Guard unit stand in front of Hellenic Parliament. Every Sunday at 11 a.m. these soldiers perform a ceremony in traditional uniforms that date back to the 1800’s. 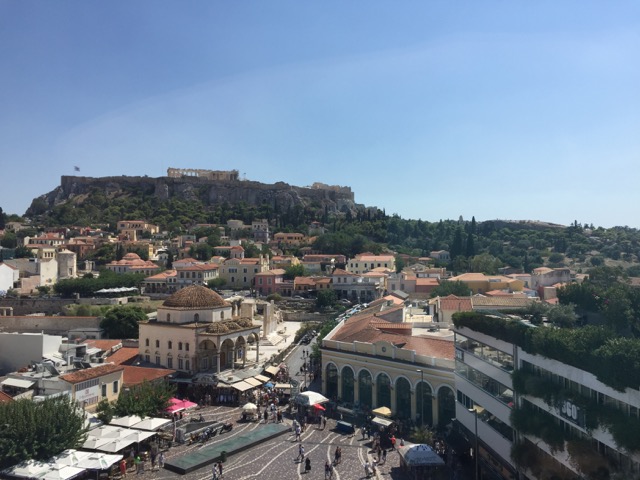 The center of ancient Athens was the Agora, a large open square that hosted markets, elections and other events in the daily lives of these citizens. Today the ancient remains of the Agora mix with the modern as the ruins are surrounding by a dining and shopping district, making the Agora a perfect place to grab lunch or a drink to cool down. 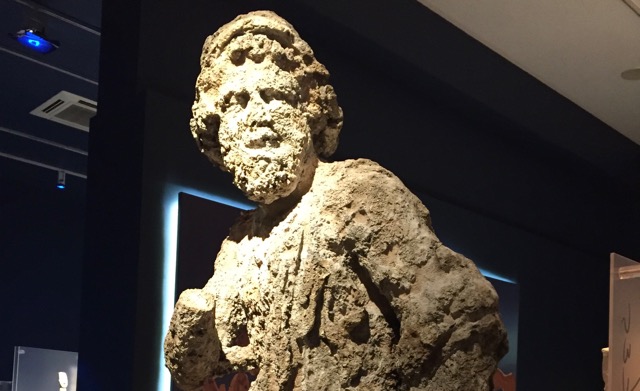 Two museums are essential to visit on a trip to Athens, Yiannis explained. The first is the Acropolis Museum and the second is the National Archeological Museum of Athens. Here there are antiquities from all over Greece and the exhibits do a great job of telling the story of the region chronologically.

I was fortunate enough to visit during a special exhibit on The Odyssey. I am a lover of language and to see ancient artifacts put in context with verses from The Odyssey was incredibly moving.

On our way to our final stop in the city, we passed through Exarcheia, a neighborhood home to the city’s anarchist communist population. The neighborhood is a center for political resistance, protests and social movements. I have to admit, I had never heard of anarchist communists before driving through the graffiti lined streets in Exarcheia and I was fascinated to learn more. If you’re intrigued as well you can read more here. 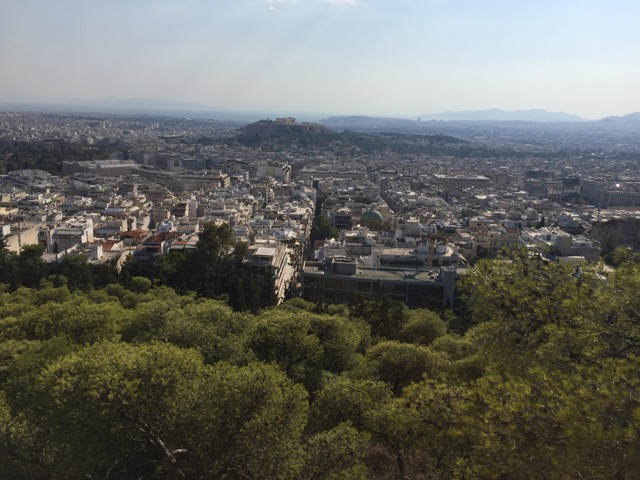 The tallest point in Athens is Lykavittos Hill and you can bet that means it offers some pretty surreal views. As our final stop in the city center, Yannis drove us to the top of the hill to look out over the city and give a summary of all the sights we visited. As he pointed out the highlights of the day from above I had an even greater appreciation for how far we had come. Without Yannis guiding me it would have taken me much, much longer to see all that I had in just a few hours.

On the way to the airport, Yannis made one last special stop just for me as our day in the hot Greek sun left me overheated. It turns out you don’t need to visit the islands to find stunning beaches in Greece – the Athens Riviera is home to a whole host of beaches.

I changed into my swim suit and went for a quick dip with the locals in a beach along the riviera and felt my body cool down in the clear waters. What an end to a day in Athens! 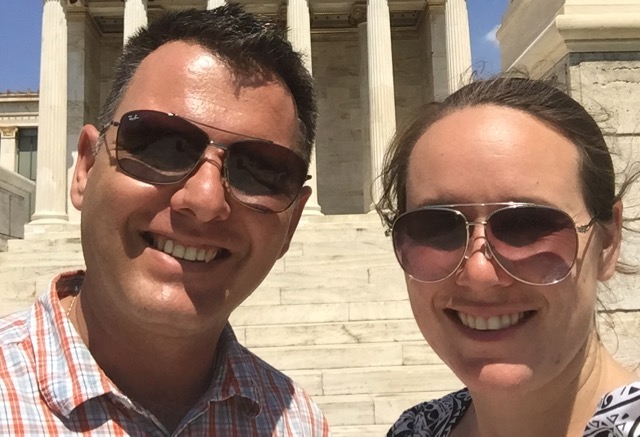 I can’t express enough how glad I am I made the decision to take a private tour of Athens with Yannis. Spending the day with him felt like spending the day with a Greek friend and he helped me see the highlights of the city as efficiently as possible. If you are interested in booking a tour, you can find Yannis on Facebook  or send him an email at jvarsakis@yahoo.gr. Thank you Yannis!