I can’t recall exactly when my desire to see and know the world so deeply began.

I grew up exploring the United States with my family extensively on summer road trips. On these excursions my mother would have my siblings and I all write about our trip each day in a journal. Perhaps this practice was the impetus for my call to travel deeper and write about it.

In high school I so longed to see the world that I self-assigned myself with a rather nerdy hobby. I’d choose a country I was interested in learning about, go to the library and read books about it and then document my learnings in a journal.

One country I studied was Turkey. As part of my learnings I’d also do some activities popular in the country or cook a recipe. For Turkey I chose to cook Turkish delights, a gel based candy. I found a recipe from one of my library books, went to the store to buy all the ingredients we didn’t already have at home and then began cooking. The result of my efforts was a hard brick of brown, bound so tightly to the pan that no remedy would remove it and we had to throw my mother’s baking dish in the garbage.

This has become one of my family’s favorite stories to bring up from time to time and remind me of my humble beginnings in this world.

“Hey Lauren, remember when you cooked Turkish delights,” my brother or sister will say at family gatherings and then we will all erupt in laughter. 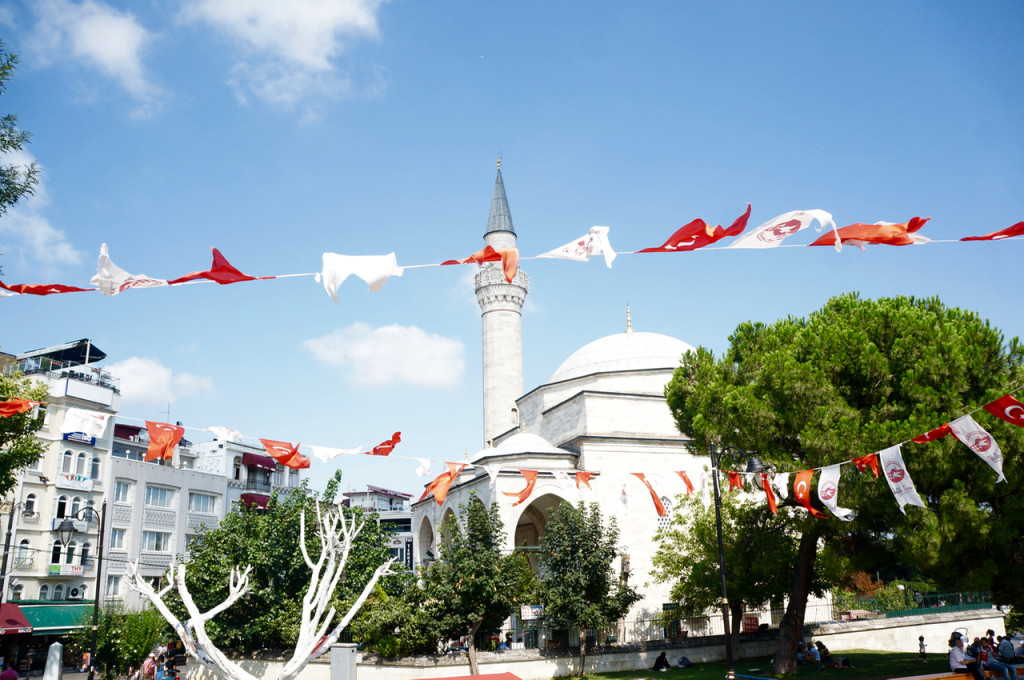 The start to my trip in Turkey had a similar start. I missed the noon bus (a first for me) from the small town in Greece where I was visiting some local friends. I arrived at the station early and waited the entire time, so how exactly I missed the bus still baffles me.

The next bus left at midnight which meant I spent a night eluding sleep as we stopped and started picking up passengers along the way and I ended up crossing the border at 4 a.m. The border crossing ended up going rather smoothly, but it was rather nerve-wracking being the only American on the bus and thus the only passenger who needed to apply for a visa on arrival. I had to find a way to work this story into the next gathering I attend where people are trying to one up each other with their stories of luxury travel to Greece. “Oh yes, this one time I crossed the Turkish border at 4 a.m….” 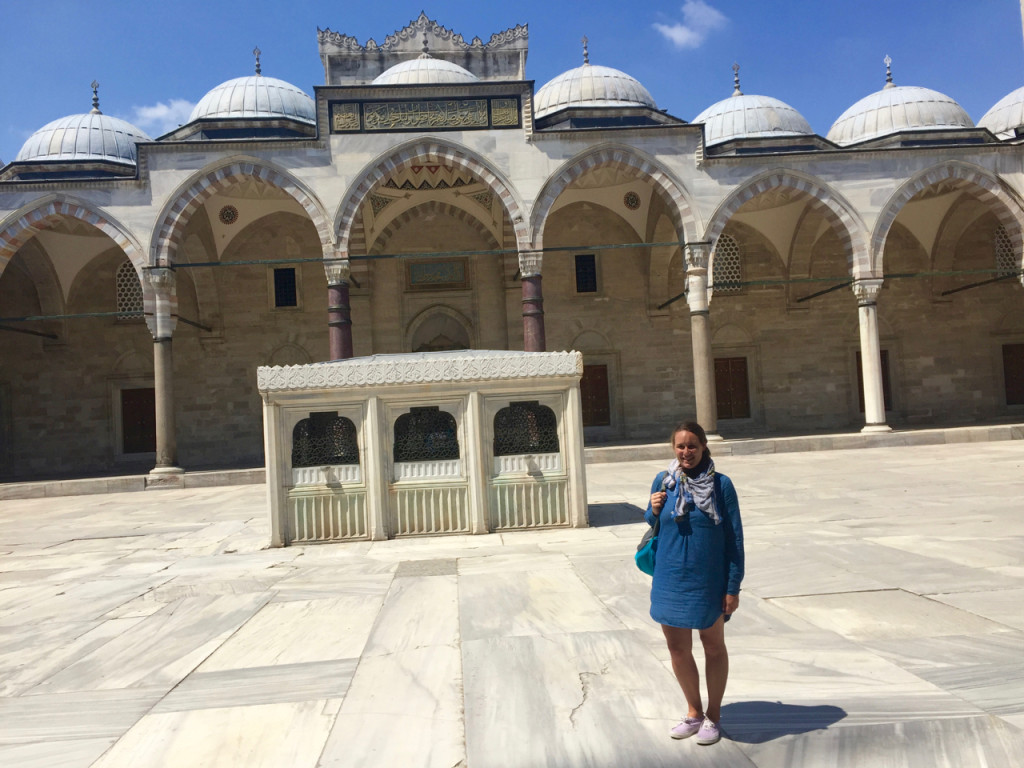 After reaching Istanbul I had a rather successful day, especially given my lack of sleep. I toured all the must-sees in this whirling city of nearly 15 million people – Hagia Sophia Museum, the Blue Mosque, Süleymaniye Mosque, the Grand Bazaar and a spice market.

With a strategic location that has made it a bustling trade center for centuries, Istanbul straddles the continents of Europe and Asia. I’ve never been to Asia, so I decided to spend the early evening taking a ferry across the Bosphorous to the district of Kadıköy and set foot on the Asian continent. My hotel explained that this was a simple journey that would only take 30 minutes and be easy to complete. 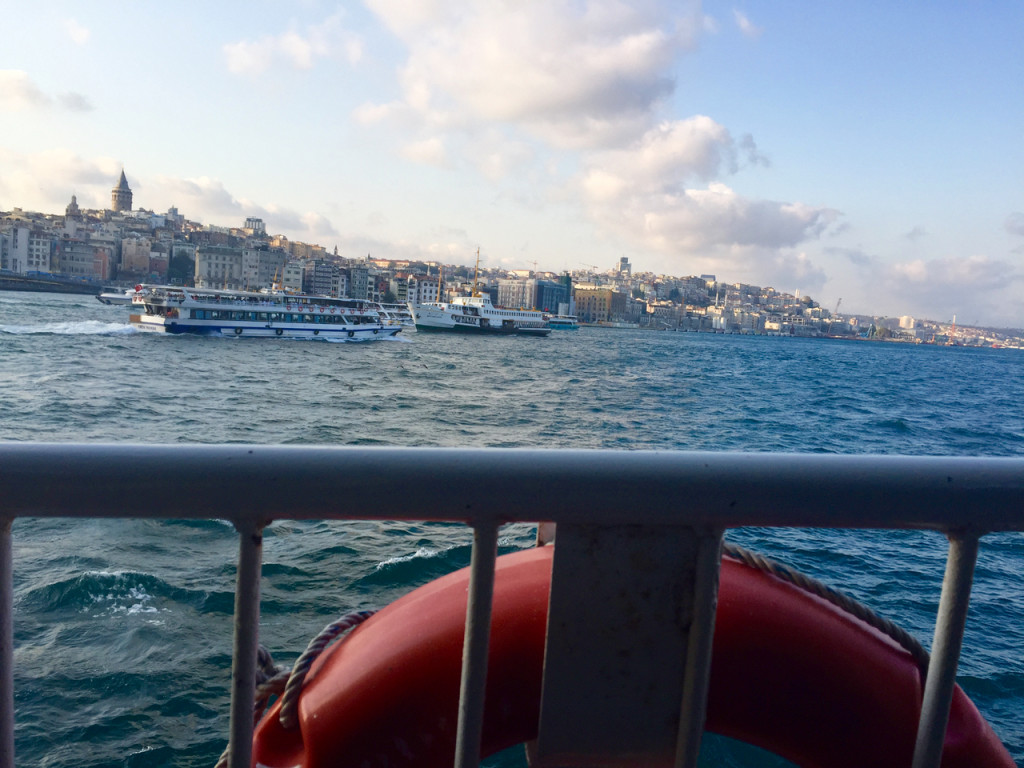 And it would have been easy to complete had I understood beforehand that the ferries don’t really stop at each port – they just kind of pull up to the side of the dock and let passengers off quickly and then pull away again.

I saw the ferry approaching Kadıköy and walked down to the lower level of the ferry but didn’t see anyone disembarking, so I waited and took in the view. When we started to move again I figured we must just be moving to another dock but realized I was mistaken when Kadıköy slowly spooled away from me. 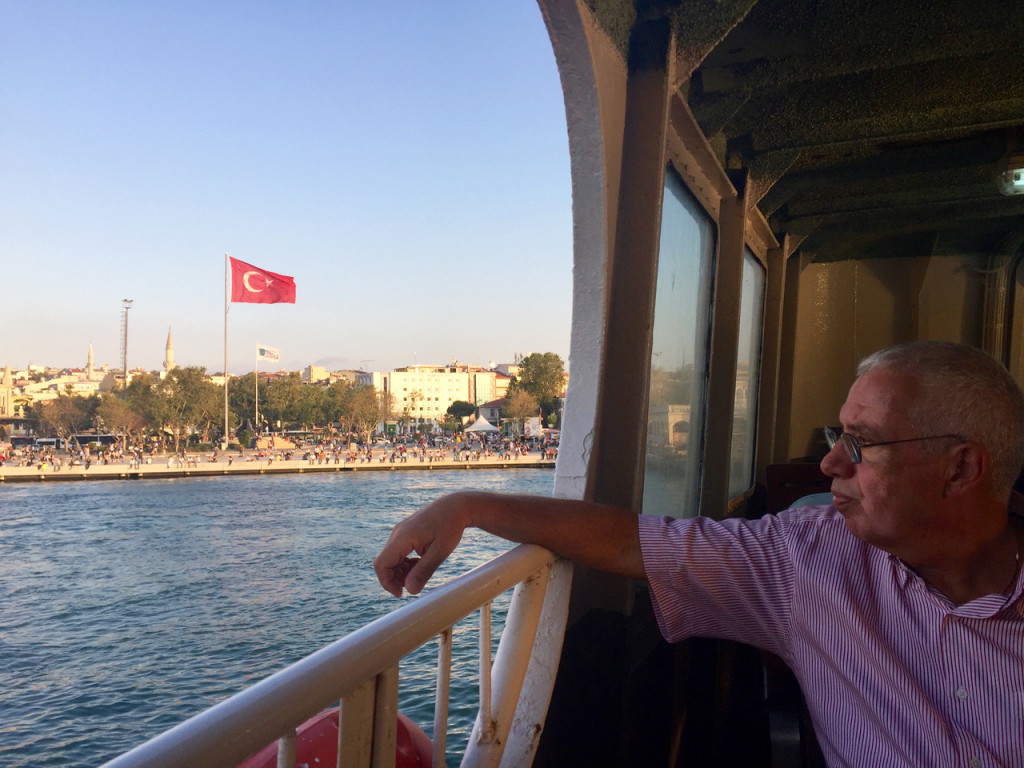 No one working on the ferry really spoke English, but with the help of hand gestures and a map I finally surmised with the aid of the snack bar cashier that the ferry’s next stop was the Adalar Islands and we wouldn’t arrive there for another hour. Luckily there would be another ferry departing these islands back to Istanbul this evening so I wouldn’t get stuck, I would just be spending the next three hours on a ferry.

In my earlier travels this mistake would have upset me greatly. But I’ve changed a lot as a traveler so I just decided to make the best of the situation and enjoy the views from the top deck. In the fading sunlight the details of the mosques on shore faded into a soft grey haze, and the ancient landscapes and buildings that have welcomed adventurers for thousands of years blurred all together like a water color painting stroked by the setting sun. I looked out at the scene and came to terms that I would not be setting foot on the Asian continent – that milestone would have to wait for another day. 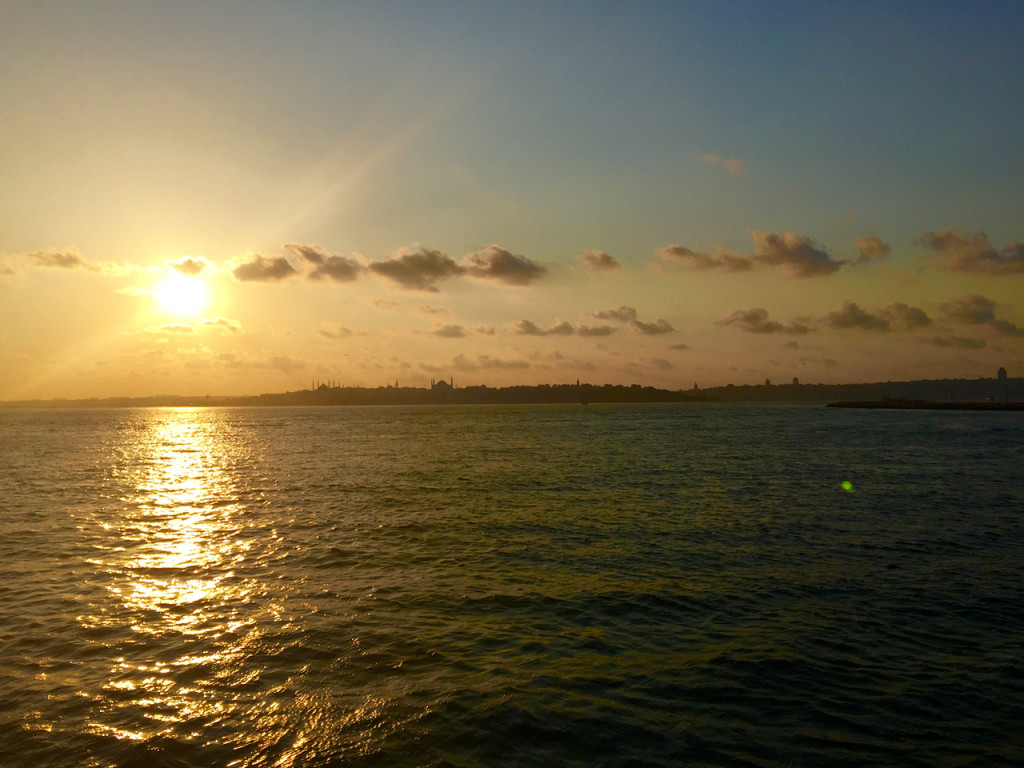 As we neared the island, I found out I was not the only passenger to miss the stop for my desired destination  – a family from Saudi Arabia had made the same error as I did. The mother of the family  spoke fluent English and we talked for some time about our mutual misjudgment. The woman was very kind and told me she had a son studying in Virginia. She asked me about my travels and told me I should visit her country, listing off her recommendations for what to do in Saudi Arabia. While speaking with her I realized I’d never actually spoken to a woman in a full niqab before. In all my travels this was another first for me. Looking into her eyes was like looking into the eyes of anyone else.

I disembarked on the island of Büyükada for 30 minutes before taking the return ferry. Though there were plenty of restaurants and shops, no one seemed to speak English here either so I wandered the streets in silence. 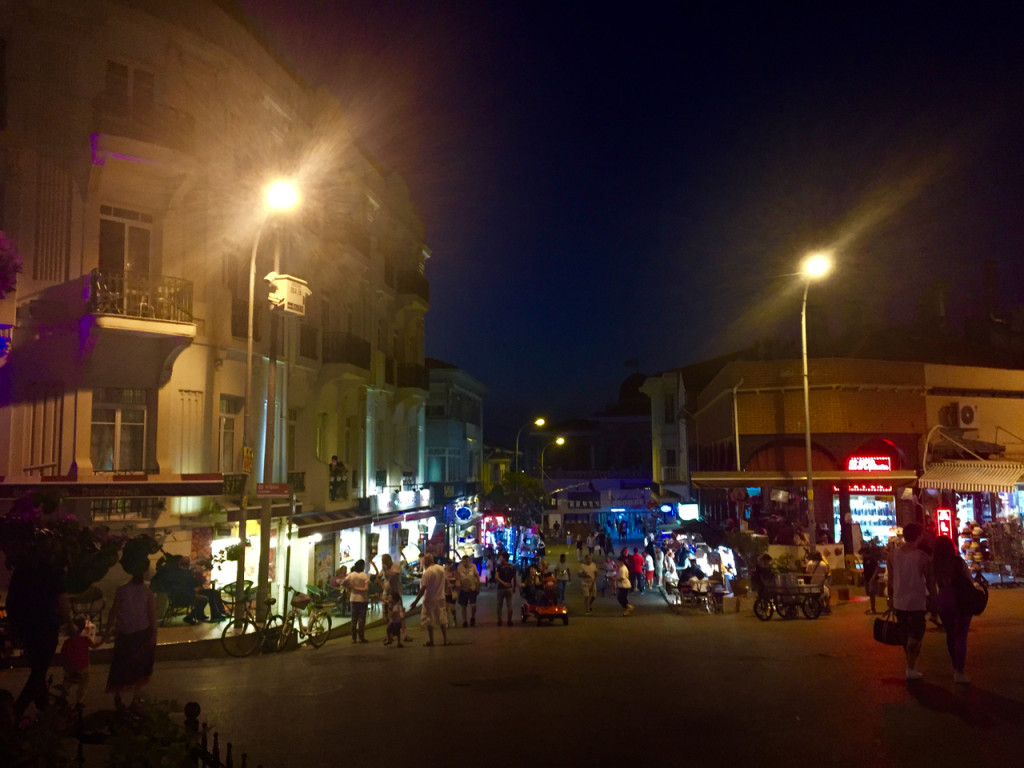 Back on the ferry I sat and listened to a postmodern jukebox album on my iphone that one of my Greek friends had recommended. Faint stars shone above as we passed bright islands lit up by homes and restaurants. I sat surrounded by love in so many forms – groups of old men smoking and talking, families on benches curling up and getting some rest, girls in hijabs taking selfies, a young couple laughing in one another’s arms. To ride on this ferry surrounded by so many different people, on an ancient waterway that has hosted millions of people throughout history felt like magic. 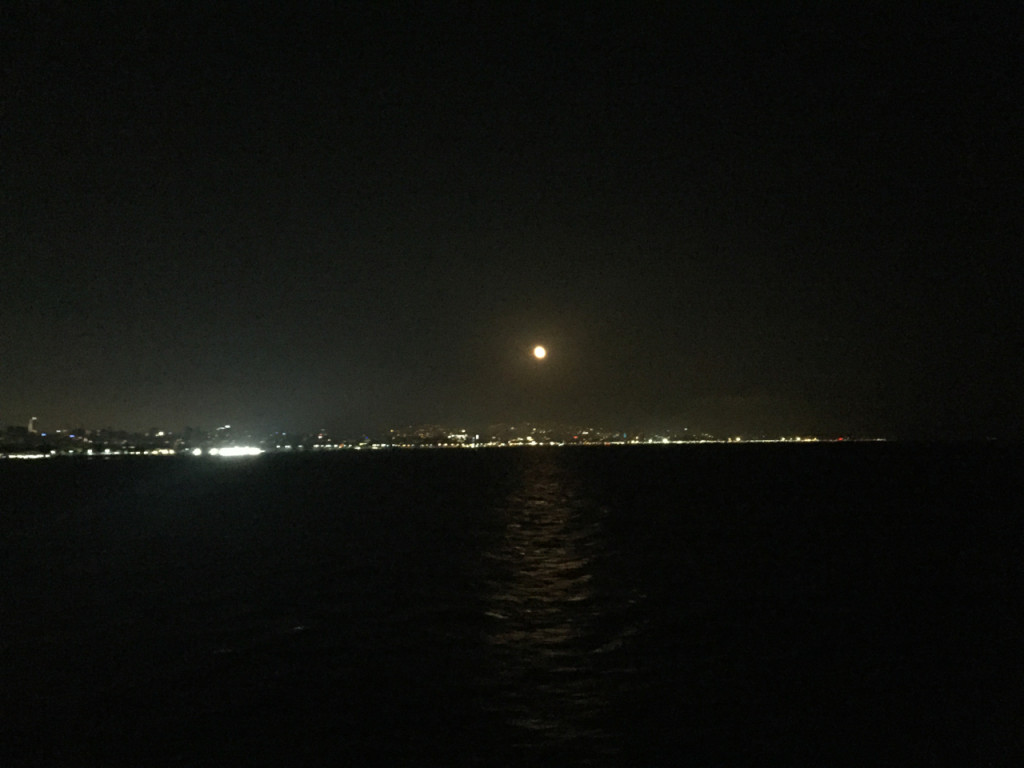 The hour was late and I knew it was not a good idea to disembark in Kadıköy as I would risk not being able to get back to my hotel. However, as we approached the dock for a second time something in my compelled to ask one last time about ferry time tables. The worker didn’t speak English, however a man in the crowd did and he told me I could take a metro back to my hotel which would run for the next 90-minutes.

I took a leap of faith and jumped off the ferry with him. I explained that this was my first time in Asia and of the mistake I had earlier.

“That is an easy mistake to make,” he replied. “I too did this some years ago. Well, welcome to Asia.”

He told me his name was Ahmet and introduced me to his teenage son who was traveling with him. He then invited me for coffee.

When you travel solo you have to learn to make quick judgements about who to trust. I looked into Ahmet’s eyes and decided to trust. I’m so glad I did. We spent the next two hours at a cafe, swapping stories and sharing knowledge, the details of which I won’t outline here. Ahmet is one of the most well-informed and wise men I’ve ever met and I learned an incredible wealth about the history, culture and politics of Turkey from him. 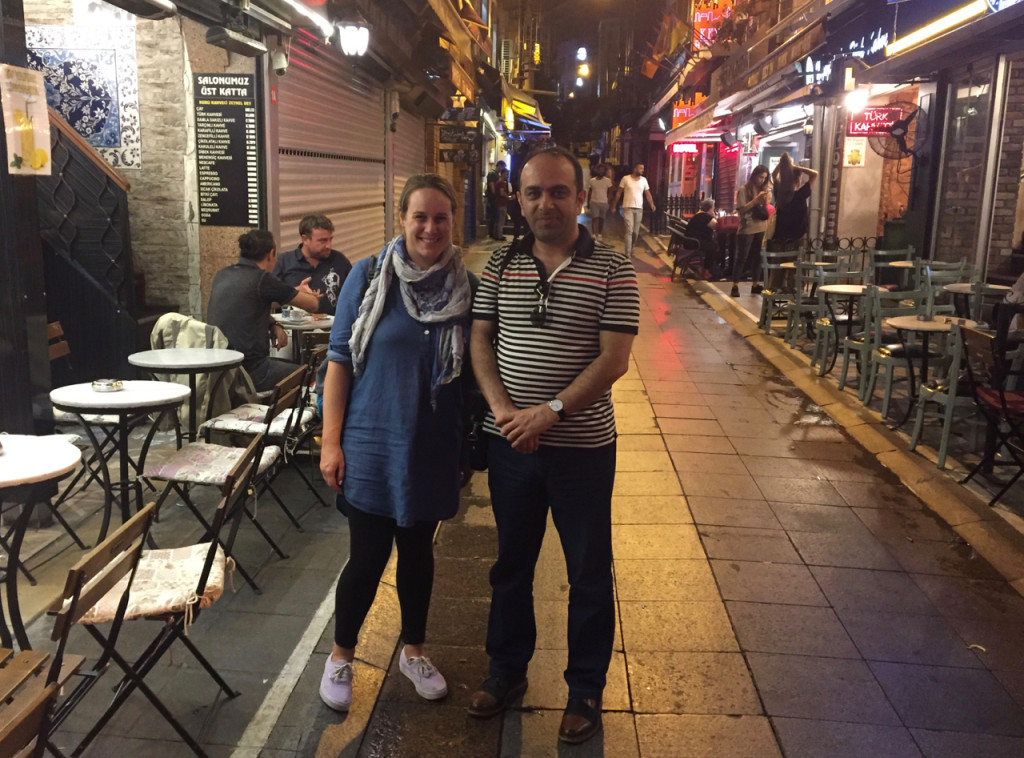 The night grew very late and the metro had stopped running so Ahmet and his son flagged a cab to go to the water taxi that crosses the Bosphorous. I expected them to drop me off here as they live in Kadıköy, but they wouldn’t hear of leaving me at such an hour, so they escorted me back across the Bosphorous and then in another taxi back to my hotel.

I am humbled by the kindness I find in places like these that are supposed to be so foreign from my home. I’ve been incredibly blessed to meet a wealth of truly good people in the world and Ahmet is one of them.

Who would have thought that that geeky 15-year-old burning Turkish delight in a Maryland kitchen would one day walk the streets of Istanbul with a man named Ahmet and feel at home?

All Posts »
PrevPreviousAcropolis Views and Ancient Wonders: The Best of Athens in a Day
NextOn the Streets of Belgrade, SerbiaNext