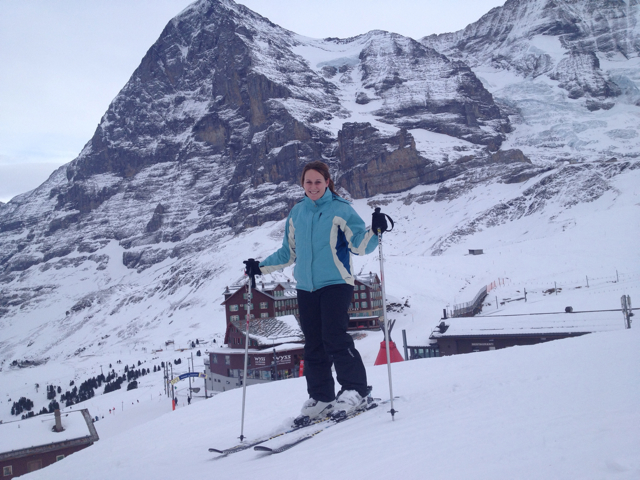 As the Jungfrau Railway rolled to a stop at the Kleine Scheidegg station in the Alps of Switzerland, I stood by the ski storage rack lost in fascination at taking a train instead of a ski lift to the top of the slope. Thee doors opened, and a herd of skiers piled past me, expertly grabbing their equipment, jumping off the train, snapping their boots into their skis and pushing off to head down the mountain. It was time for me to achieve a bucket list item and ski the Swiss Alps. 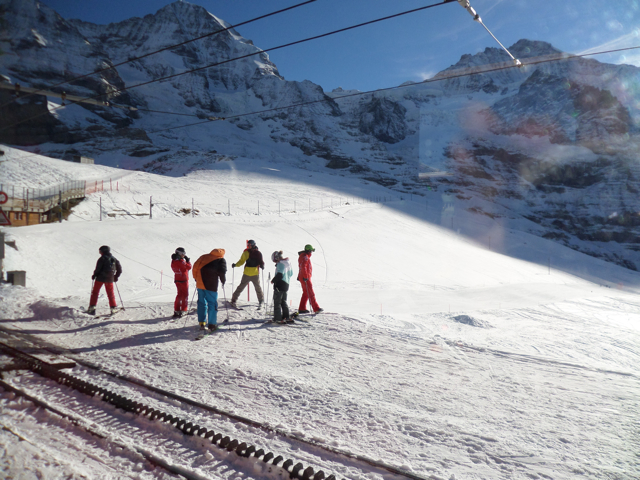 While I managed to avoid being trampled, it took me a considerably longer amount of time to follow suit and untangle my skis from a ridiculous situation involving poles and the rack’s edge, determine a method to disembark the tall car that wouldn’t lead to a broken ankle in my heavy ski boots, remember how to snap those boots in the skis, and finally, push off in the direction of a map or someone who could provide directions as to which of the trails I would be most likely to not kill myself on.

Ok, so despite what I may have told the cashier at the Buri Sport rental shop, I’m not a skier. Prior to my Switzerland experience, I had been skiing a grand total of three times, on mountains the Swiss would consider hills in the mid-Atlantic region of the United States. Oh, and the last time I went skiing before this was when I was in high school, around ten years ago, a statistic I only chose to remember minutes before descending my first slope in the Alps. 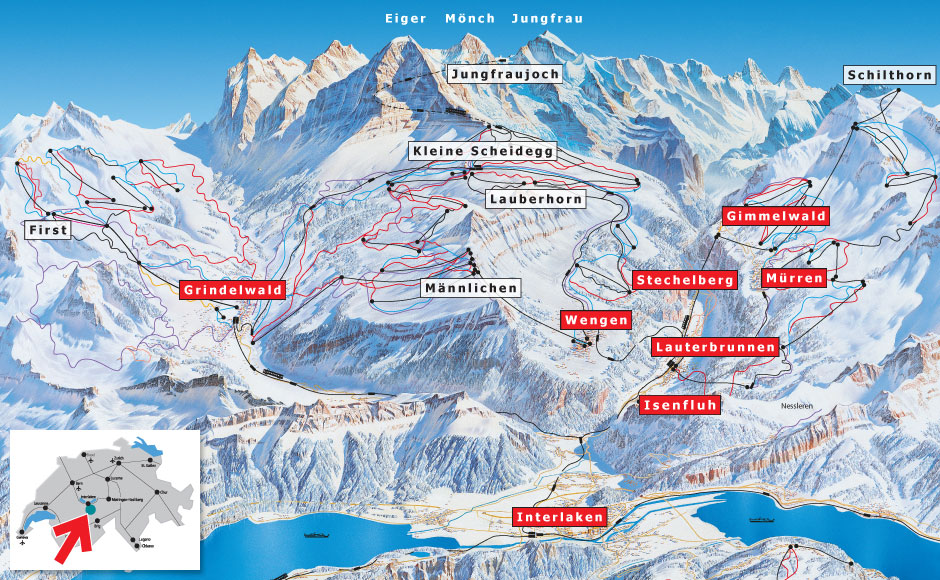 Unlike the very few mountains I have skied in the United States, the slopes in the Jungfrau region are not swarming with handsome rescue skiers ready to point a lone newbie in the right path, and directional signage is scarce. A ski lift pass for the Jungfrau region gives access to a variety of mountains, and at the top of each is a large map with all the trails marked.

Lucky for me, a beginner’s trail was right next to this map, and I glided to the start, feeling excitement as my motor skills kicked in and I gently sailed down the slope.

Then I came to a crest and stopped.

This is a beginner’s trail?

A steep hill stretched before me, and, with no end of its daunting angles in sight, I came to the realization that there was the distinct possibility that I would, as certain family members predicted, kill myself skiing down this mountain.  Or maybe I would just break a leg.

I finally found something that TERRIFIES me in Europe. 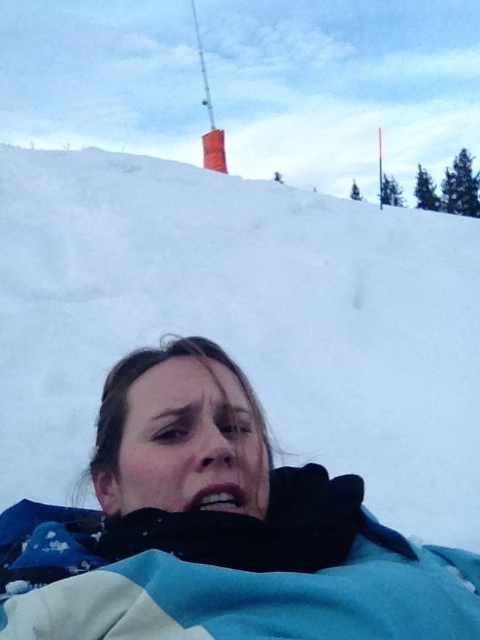 I took off, trying to remember the techniques my parents taught me so many years ago, and made it approximately 20 feet before falling.

Warning: if you fall on a Swiss ski slope no one will help you up. I fell about a dozen times during the afternoon, and only once did a fellow skier stop to help me untangle my feet – and this was another American woman who also had been experiencing her fair share of spills in the snow. 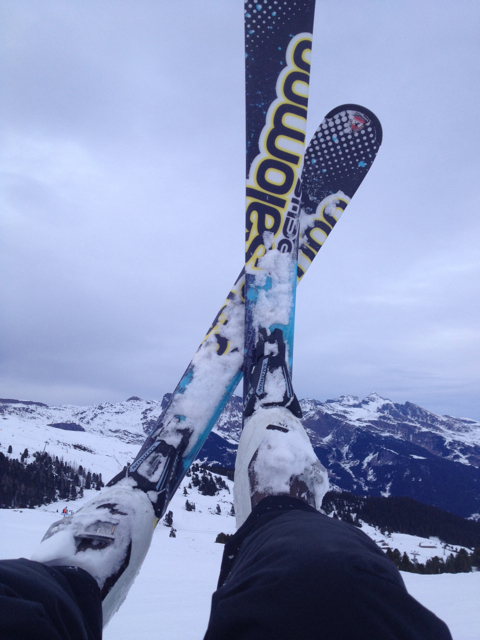 The first segment of the beginner’s trail proved to be the most difficult, and so by the time I had fallen a handful of times and my muscles remembered how to ski, I was in less treacherous territory and made it down the rest of the run upright.

The trail runs down to Grindelwald, a town that serves as a base to reach all the ski slopes in the region. From here skiers can take the train back up to Klein Schiedegg or a bus to other ski lifts. Skiing down to Grindelwald the view is so lovely it often is hard to focus on staying upright as the mountains stretch all around leading to a valley chocked full of cozy chalets. 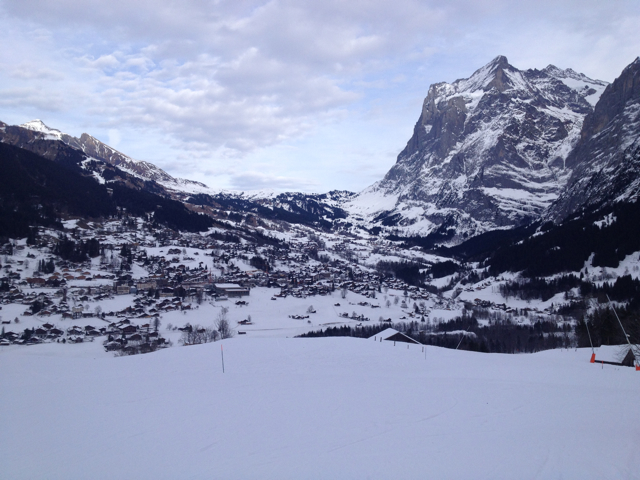 It took me an hour to reach Grindelwald, and along the way I passed houses and bars (if I actually knew how to ski I might have been tempted to stop in for a glass of warm, spiced wine), frozen waterfalls and families of tobogganers (ok, yes, sometimes these sledders passed me).

From Grindelwald, I decided to take the train back up to Klein Schiedegg to fulfill my second alpine fantasy and ride a ski lift. The 30-minute journey was a welcome rest.

Instead of wearing a chunky lift pass outside your coat, a Jungfrau region lift pass is an electronic card you can store inside your jacket. Train and lift gates read the pass and open as you brush by.

Back at Klein Schiedegg I boarded a lift that lead to a peak with another blue or beginners trail. Or so I thought. The views from the ski lifts are so dang beautiful I feared I would fall off from twisting my body around to peak out at the valleys below me. 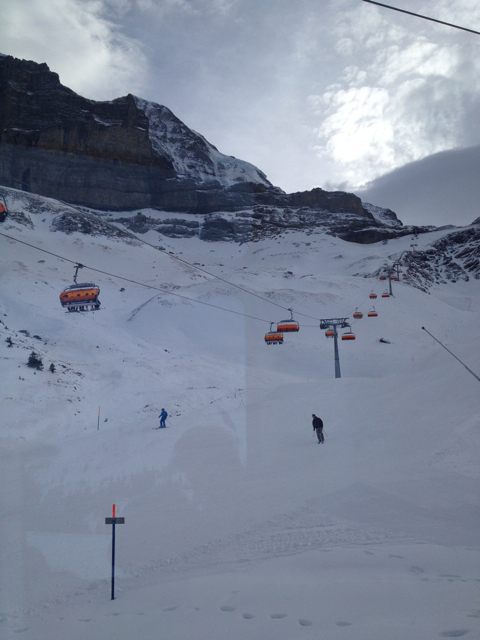 I exited the ski lift at the top of another gorgeous snowy peak only to realize there were no blue trails leading down, only red, or medium ones.

The view from the top of these trails filled me with a new sense of terror, and I realize my previous fear of the beginner’s trail to Grindelwald was nothing compared to the sense of profound of panic I felt looking down at the dozens of skiers swiftly and gracefully catching their edges and carving down the icy powder. 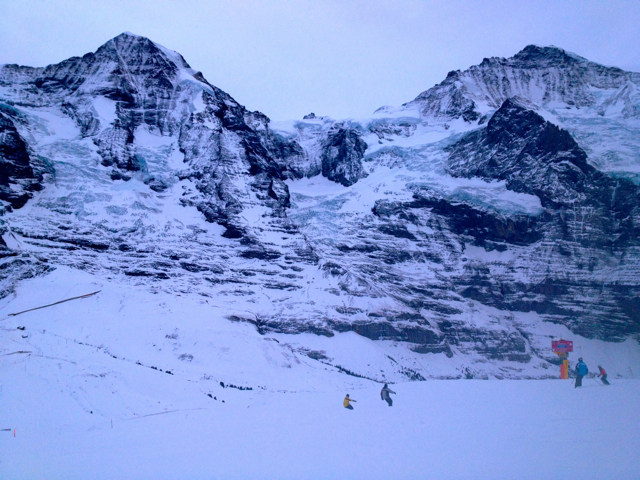 To avoid a deadly wipe out, I carved down the mountain in wide swoops, praying the skiers around me were more talented than I and able to maneuver themselves to avoid a collision.

I would like to take this opportunity to apologies to all the skiers who had to make it down the mountain with me up there, because I can assure you I looked the very definition of an idiot American tourist and caused more than a few to curse as they swerved to avoid me.

I surprised myself by slowly descending without a single collision or wipeout. When I made it back down to the base I hoped on the ski lift and went up again for more.

Note: Interlaken Tourism provided me with a Jungfrau region pass. All thoughts, opinions and snowy wipeouts are my own.