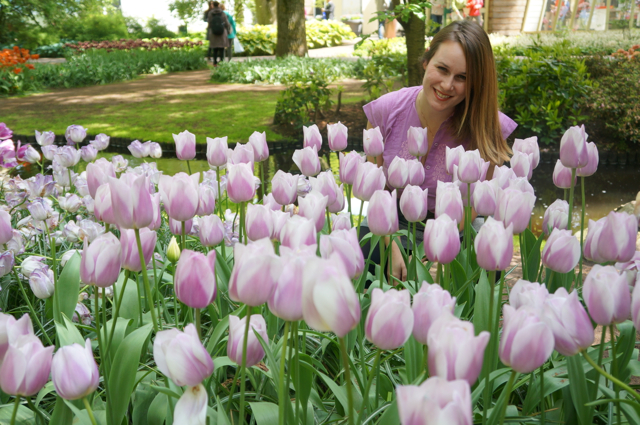 The jungle of Costa Rica is a beautiful place to live. But, as far as seasons go, we get half the amount of fun.

Costa Rica only has two distinct seasons – dry, which lasts roughly from December to *fingers crossed* May, and wet, which lasts from May to November.

During the dry season there is not much rain, though this season in particular has been wetter than normal, and, during the wet season, it rains every day.

Different rainforests have different patterns for the dry and wet season, but in the mountainous rainforest where I live near a tiny village called San Ramon de Tres Rios, wet season turns the place into a bleak black hole where it rains every day from about 11 a.m. to 3 a.m.

It’s a really good idea to have an indoor hobby if you live in the rainforest during wet season.

But anyway, I digress. Today I want to write about spring flowers, which is something I do not see in the jungle as there is no spring in Costa Rica.

The foliage doesn’t change much here. Year round it is green, green and more green.

And while I have enjoyed not having a snow-fest of a winter like my family experienced this year in Maryland, I have missed the signs of spring, my favorite of which is flowers.

To satiate my desire to see spring flowers I’ve been looking back at the photos I took at Keukenhof Garden during my visit to the Netherlands last year.

And what better way to celebrate my Costa Rican non-spring spring than to share some of my favorites with you!

The History of Tulips in Holland 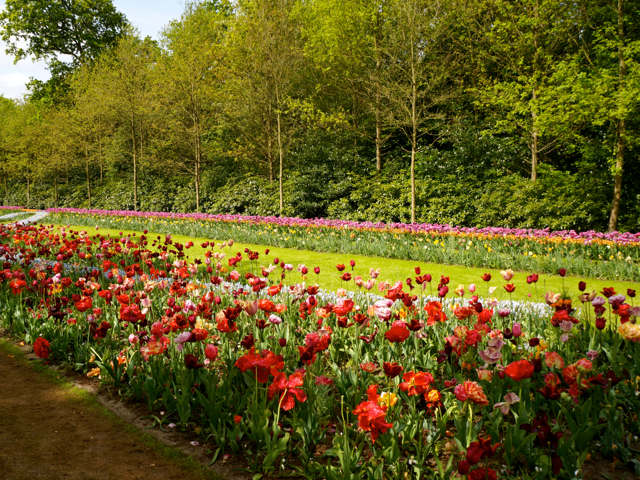 So how did the tulip get to be an icon of Holland?

Tulips were originally found in the Himalaya mountains. While prayer flags and Mount Everest may be the icons that come to mind when we think about Himalaya, tulips still do grow widely throughout the region.

In the 11th Century, a group of people from the Himalaya took the tulip with them to Turkey, and for centuries grew the flowers there. In the 16th century, Dutch traders obtained bulbs while conducting business in Constantinople. 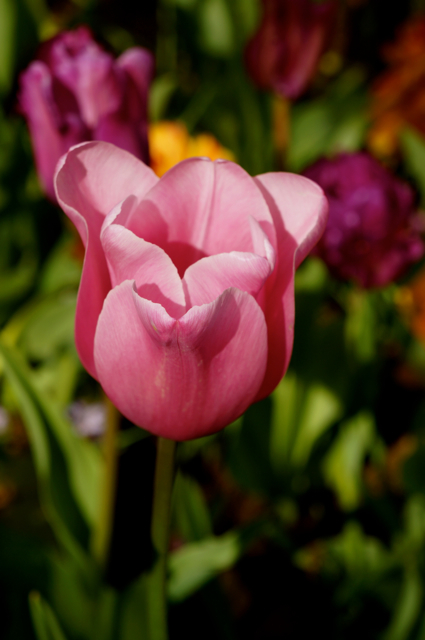 In 1560 the first tulips bloomed in the Netherlands. Tulip bulbs reproduce slowly and, as the flowers became more and more popular, the supply failed to meet the demand, and what the Dutch refer to as “tulip mania” was born. In the 17th Century tulip mania reached a height as tulips became a symbol of class and the wealthy paid higher and higher prices to obtain the flowers.

Tulip mania carried on, and today the Netherlands is the world’s largest producer of tulip bulbs, providing 4.2 billion bulbs annually. Half these bulbs are exported. The other half remain in the homeland, flowering throughout the small country, brightening green fields with fanciful colors.

When to see tulips in Holland 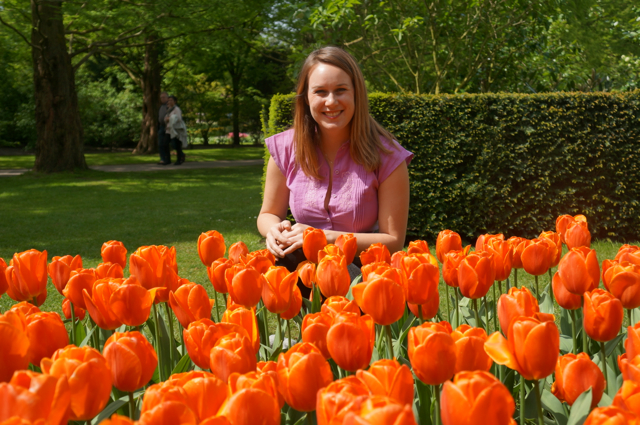 I had a set image in my mind of the photo I wanted to take on my visit to the Netherlands. I would rent a bike a ride through tulip fields, gliding past rows and rows of colors.

I researched tulip fields in Holland, took a bus to Keukenhof Garden near Amsterdam, and headed to a bike shop to rent a bike and pedal to the nearby fields. The colors filled by imagination and I was bursting with excitement when the shop keeper told me I had arrived too late to see the tulip fields.

What? Too late for tulips? This was the beginning of May and my research had stated that tulip season runs from Mid-March to May. What I didn’t know was that tulips do not peak at the same time every year. Their peaking varies by a few weeks each year and this year I had arrived too late. The tulips had all already been cut, leaving the fields uniformly brown and green. 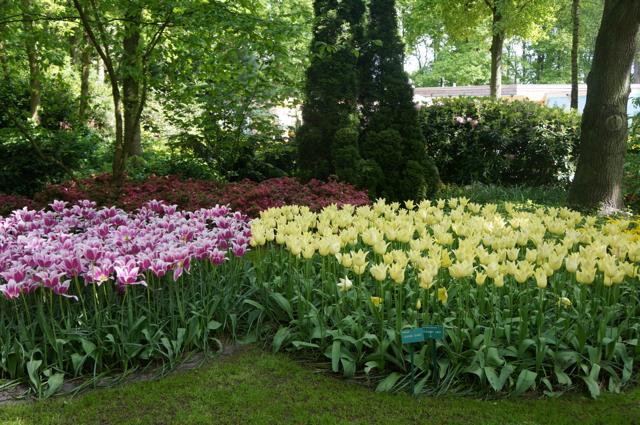 Unless you stay in Holland from March to May, there is no guarantee your visit will coinside with the blooming, however, it is generally safest to plan a visit in mid-April if you do wish to see the tulip fields in full bloom.

The best place to see tulips in Holland is Keukanhof Garden. Though there are no iconic mile-long fields here, there is an amazing selection of tulips, and visitors are guaranteed to be able to take in tulip beauty during tulip season. This year the park is open March 20 to May 17, 2015.

Keukenhof is often marveled as “the most beautiful spring garden in the world.”

Located just outside of Amsterdam, the park is open for eight weeks every spring to share Holland’s finest tulips with 800,000 visitors. The grounds were first crafted in 1857 as an English landscape garden, but today is a showcase for the Dutch floricultural sector.

Seven million bulbs from 30 gardeners are planted throughout the park in nine inspirational gardens. Ever year different planting is redesigned to give it a unique look and theme. In 2015 the theme celebrates Dutch artist Vincent Van Gogh. 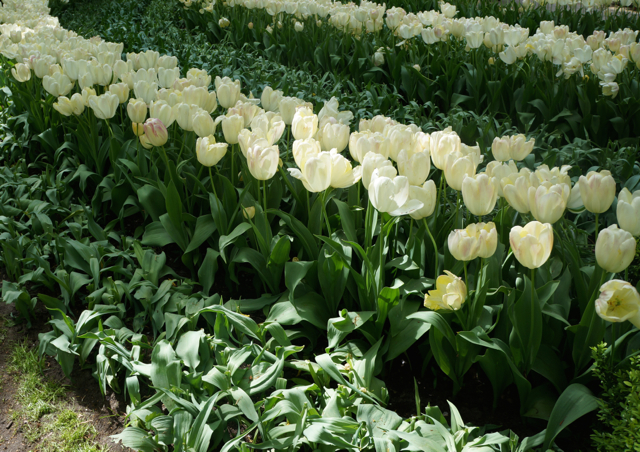 There is also a pavilion on site that houses 20 flower and plant shows throughout the season, exhibiting a myriad of colors and shapes from different gardens. 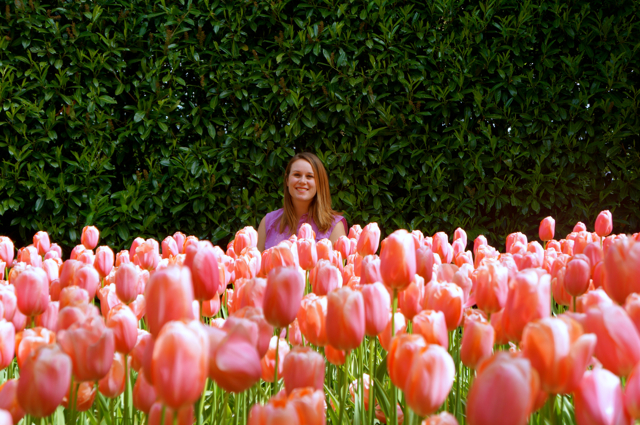 Keukenhof is enchanting, and one of my favorite places I’ve visited in my solo travels. I may not have gotten the bike riding through tulip fields shot I had imagined, but the park had so many beautiful scenes for tulips that I hereby brand myself as the tulip-creeper!

How to get to Keukenhof Garden 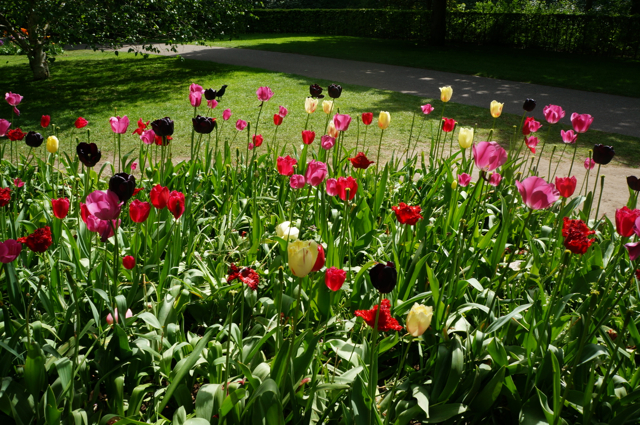 Buses to Keukenhof leave at frequent intervals throughout the day from Amsterdam central, Schiphol Plaza or Leiden Central Station. The trip is 30 minutes and buses bring you directly to the front gate. 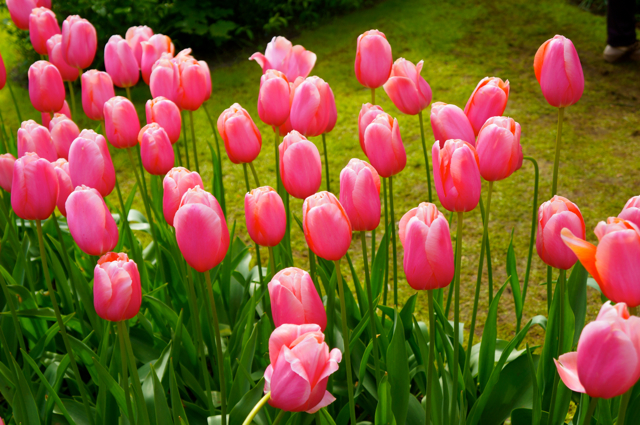 Purchas a Combi-ticket online ahead of your arrival. These tickets include round trip transportation and park entrance, so you won’t have to queue when you arrive.