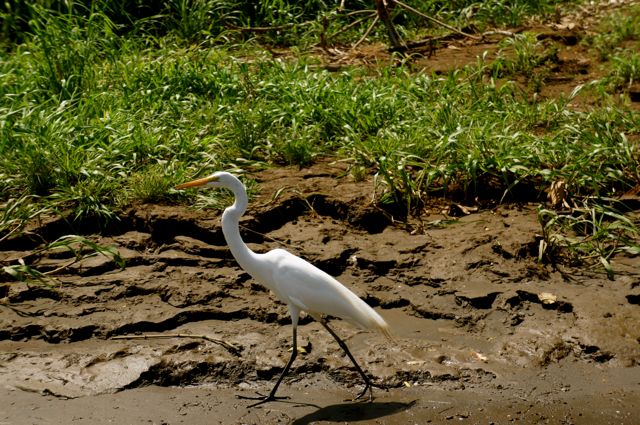 Costa Rica is the most bio diverse country in the world, being home to 5 percent of the world’s species. This is a fact that Costa Rica boldly, and proudly shouts at the top of its lungs in all of its guidebooks, tourism marketing materials and the airport signage that greets you upon your arrival to the country.

In my day to day life living in the rainforest near Tres Rios, however, this fact is less apparent than it is at the airport. I’ve spotted a few unique species, such as the roadguard snake, green spiny lizard, and worked to overcome my fear of spiders, but none of Costa Rica’s more marketable creatures live in my corner of the rainforest.

I’m sad to report we don’t even have any singing sloths here in Tres Rios, unlike Costa Rica’s tourism board promised.

One species found in Costa Rica I’ve been really eager to see for quite sometime is the crocodile. I’ve been fascinated by crocodiles ever since Steve Irwin enchanted me with the word crikey on Animal Planet.  A few years ago, on my East Coast Australia backpacking trip following my exchange semester in Melbourne, I had the chance to take a crocodile tour in Cairns. After visiting the Great Barrier Reef I had a spare day there, but instead of their crocodile tour I chose to see some waterfalls.

I’ve been kicking myself ever since for missing out on the rare opportunity to see crocodiles up-close, since this species only exist in the United States in the very South of Florida, nowhere near where I lived in Orlando. 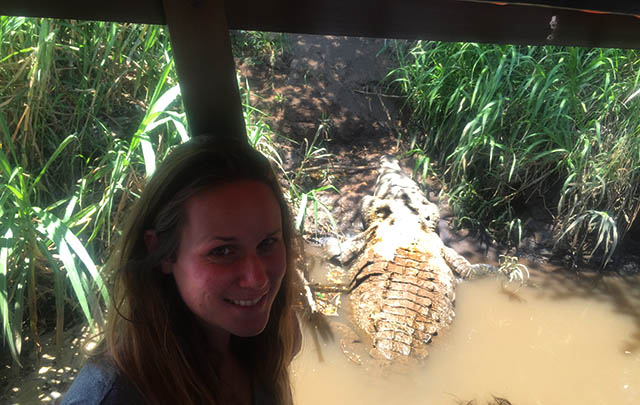 It’s lucky for me then that I got to experience Jose’s Crocodile River Tour with my mom during her recent visit and finally get up close to crocodiles in Costa Rica! 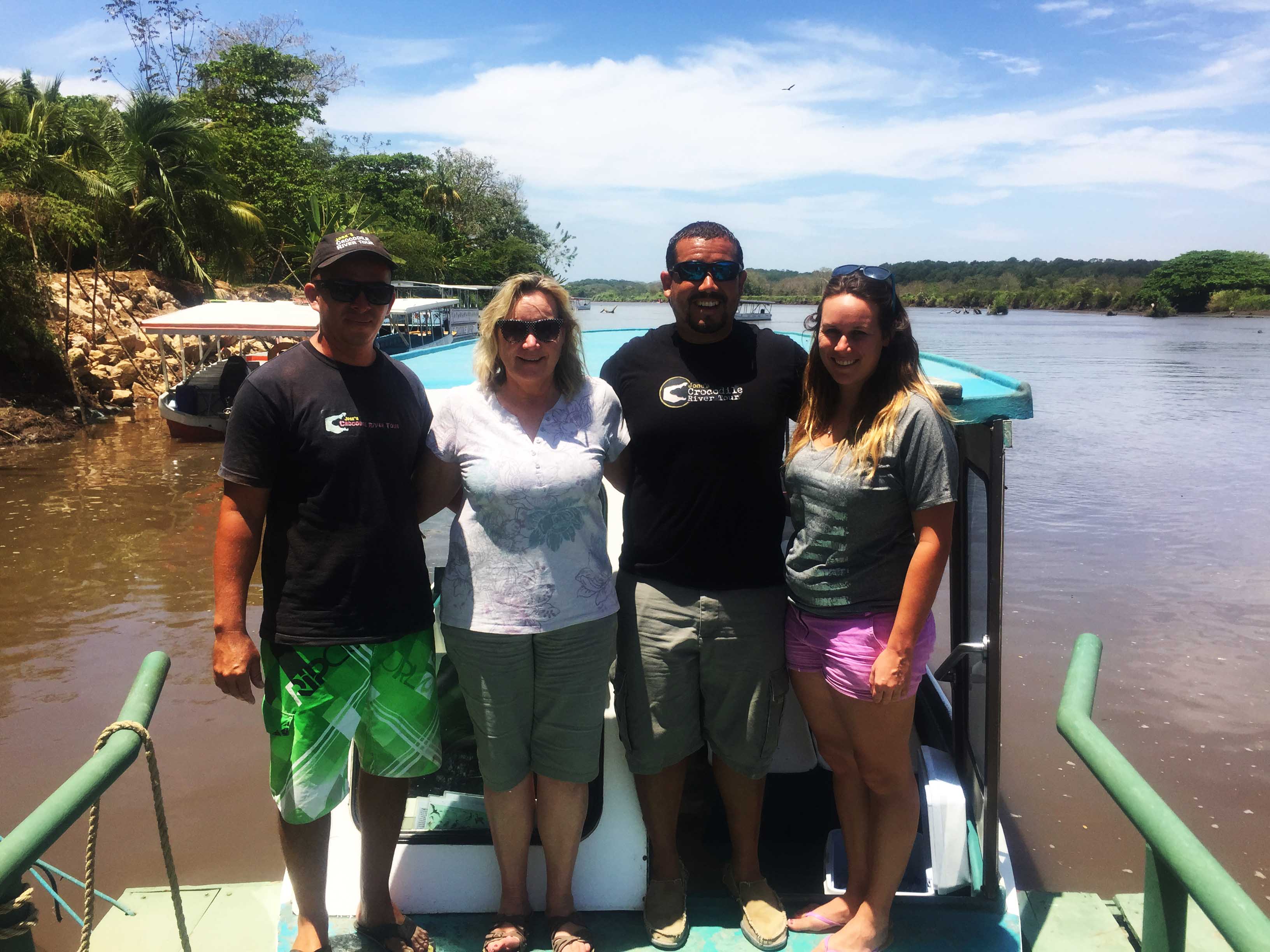 Jose’s Crocodile River Tour takes place on the Tárcoles River in Central Pacific Costa Rica, near the beach destination of Jaco. Their two-hour river boat tour takes you on a journey to the best viewing spots to see American crocodiles of all sizes, exotic birds and mangrove crabs.  The tour is led by Jose, a Costa Rican native and founder of the company, who gives an informative, and humorous, bilingual narration. 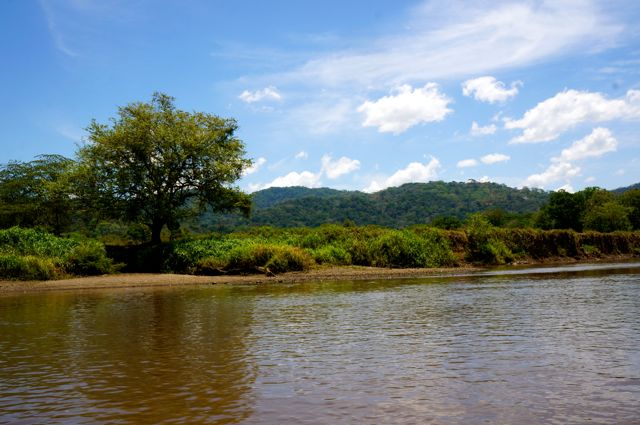 Highway 34, the main stretch of highway that leads from San José to the Pacific shores of Jacó, rolls through the small town of Tárcoles. The road leads past a small collection of restaurants, produce stands and what is dubbed as “the crocodile bridge” by locals. This bridge is frequented by visitors who want a glimpse of crocodiles. It’s a great place to start, but you can get much closer on a river tour like Jose’s.

The Tárcoles River is the most polluted river in Costa Rica. It’s watershead, which reaches half of the country’s population, drains around 67 percent of Costa Rica’s untreated waste. Much work has been done in recent years to clean up the river, and, despite its contamination, the river remains a thriving habitat for the American crocodile. 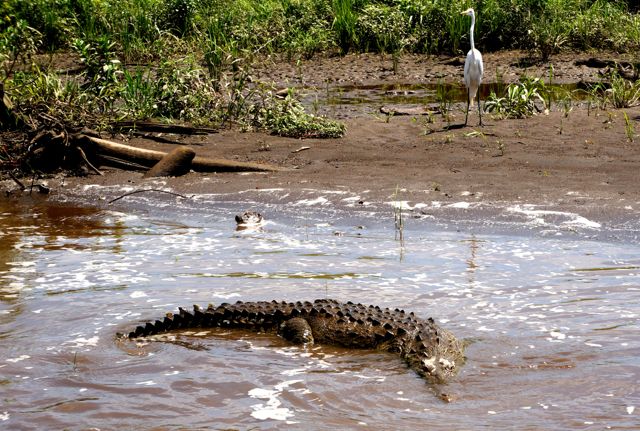 Costa Rica is home to the American crocodile, a species which is found throughout the Americas from Southern Florida to Peru. The American crocodile is one of the largest of the 14 crocodiles species still in existence today. They are usually gray in color and have a v-shaped snout. Adult males can be as long as 13 feet and weigh as much as 400 pounds.

This particular crocodile we saw on the tour is ranked among the largest of the species in Costa Rica. 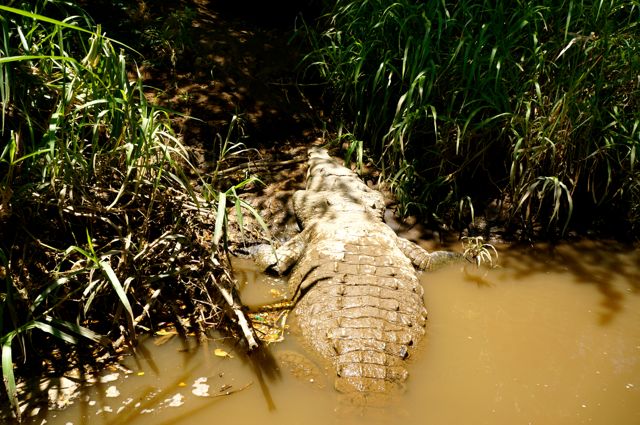 While this species primarily lives in rivers, they are also sea-going animals and sometimes are spotted in the Pacific Ocean. 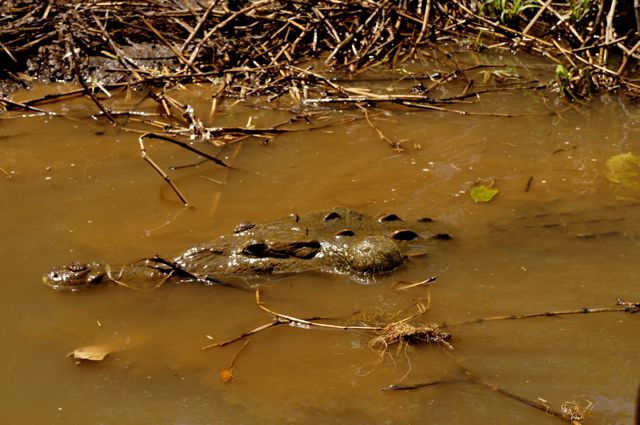 The American crocodile is considered an endangered species. Their habitat is shrinking in Central America, but the pre-historic creatures continue to thrive in Costa Rica.

It’s generally not safe to get so close to crocodiles, but Jose and his staff are as professional as it gets when it comes to crocodile handling, and are experts in maintaining safety while getting uniquely uninhibited views. 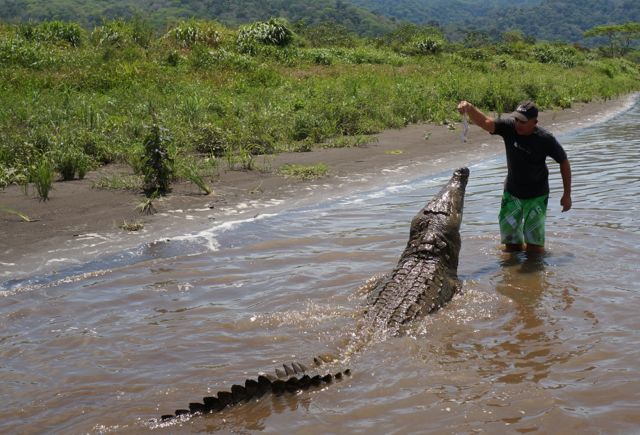 Jose and his team know the crocodiles on this river so well they’ve named them with well-themed names such as Miley Cyrus, Shakira and Daniel Ortego, the President of Nicaragua, whose been known for conflicts with Costa Rica.

They say Daniel Ortego the crocodile is the meanest croc in the river. I’d say his tail is rather menacing! 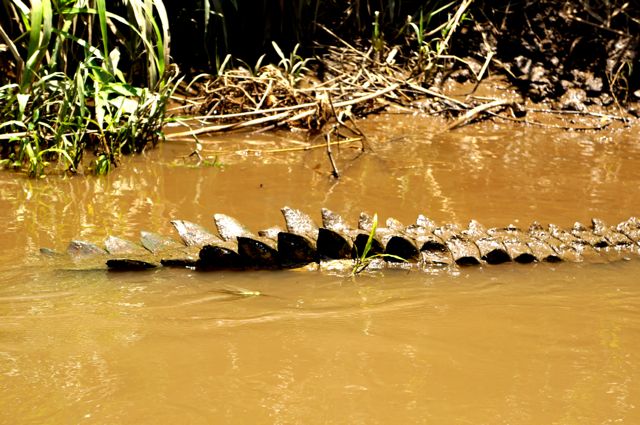 Our brave boat driver ventured to the river shores to feed the crocodiles chicken. What may be a perilous situation for him resulted in amazing photo opportunities for us. 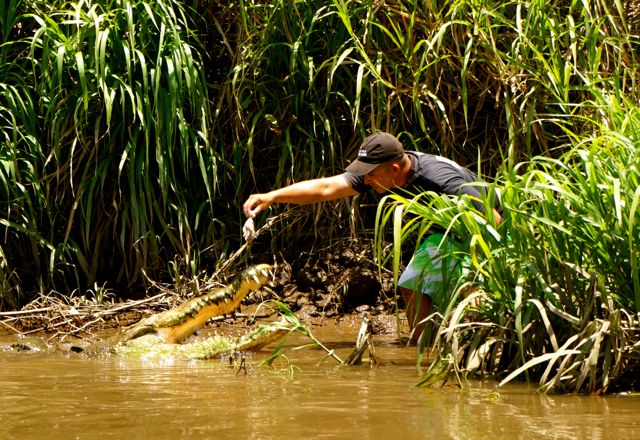 If you are in the Jaco area, I highly recommend Jose’s Crocodile River Tour. Chances are you’ll even get your own opportunity to take a crocodile selfie! 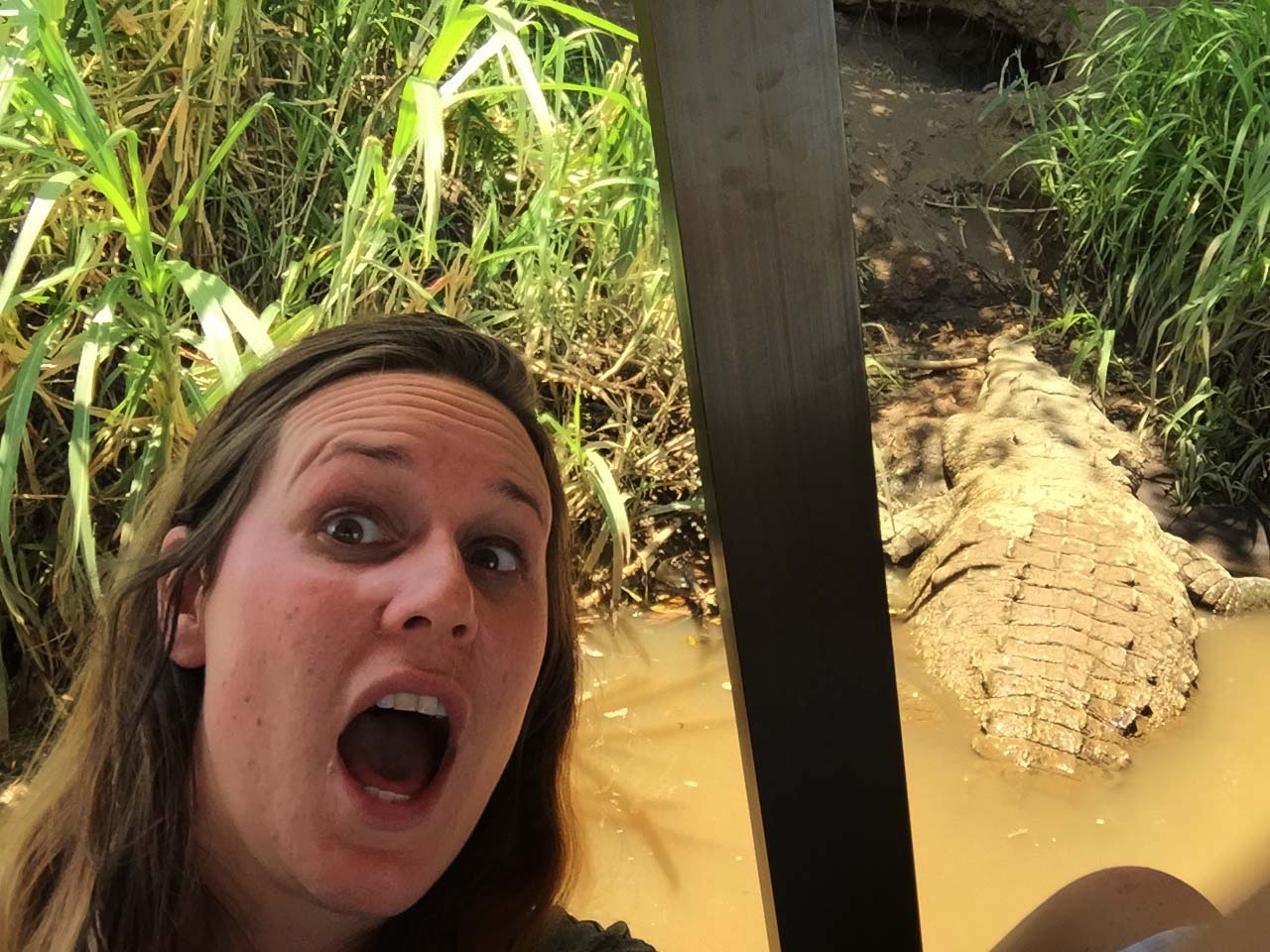 Where to Stay in Jaco

As always, if you are visiting Jaco, I recommend the fabulous Hotel DoceLunas for your stay. Click on the photo below to book your stay! 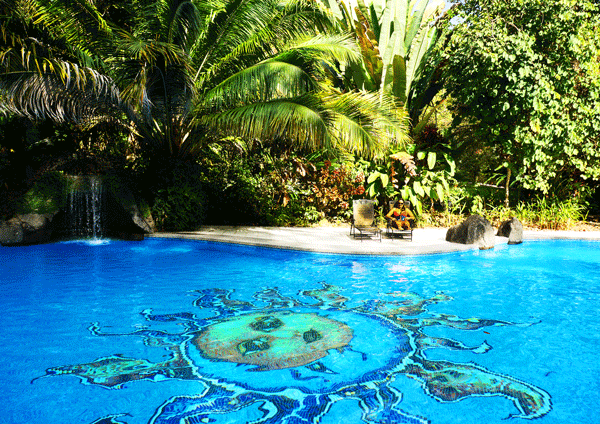 Note: Thank you to Jose’s Crocodile River Tour for hosting Something In Her Ramblings on your tour. All thoughts and opinions are my own.