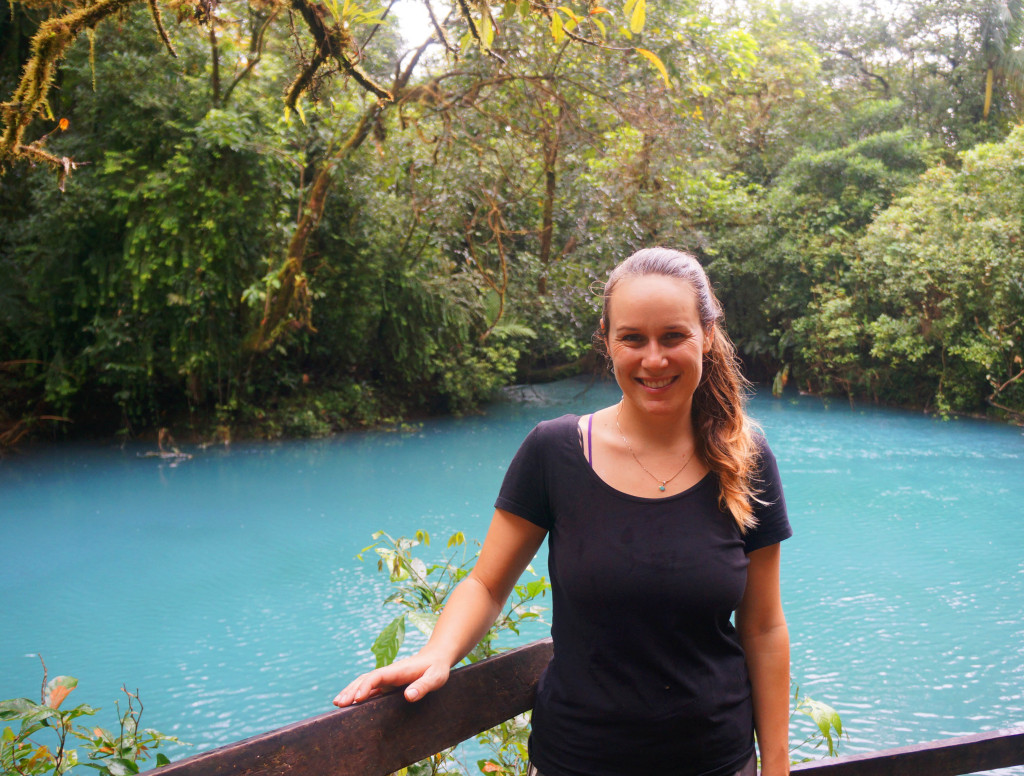 It’s hard to believe I lived in Costa Rica for a year and a half. Well, that’s not entirely true. Some days it felt as if I’ was there for an eternity and never had any life other than the one was currently living. Some days it felt as if the magic of living above the streets of Madrid, traveling to such wondrous sights as the Fjords of Norway, lights of Paris and tulip fields of Holland never happened and was all just a dream. But I digress.

As my time in the land of pura vida rapidly approached an end, I tried to squeeze in a few last-minute trips. I jumped off a 50-foot waterfall in Montezuma and rode an ATV along the beaches of Santa Teresa. And I ventured to Costa Rica’s northern region of Alajuela to take in the otherworldly blue of Rio Celeste. I traveled with my favorite Tico travel buddy, Diego, which gave me great local insight (as well as a handy photographer). In today’s post I’ll not only share with you stunning photos that will make you want to start your trip right now, but also what you need to know before visiting. 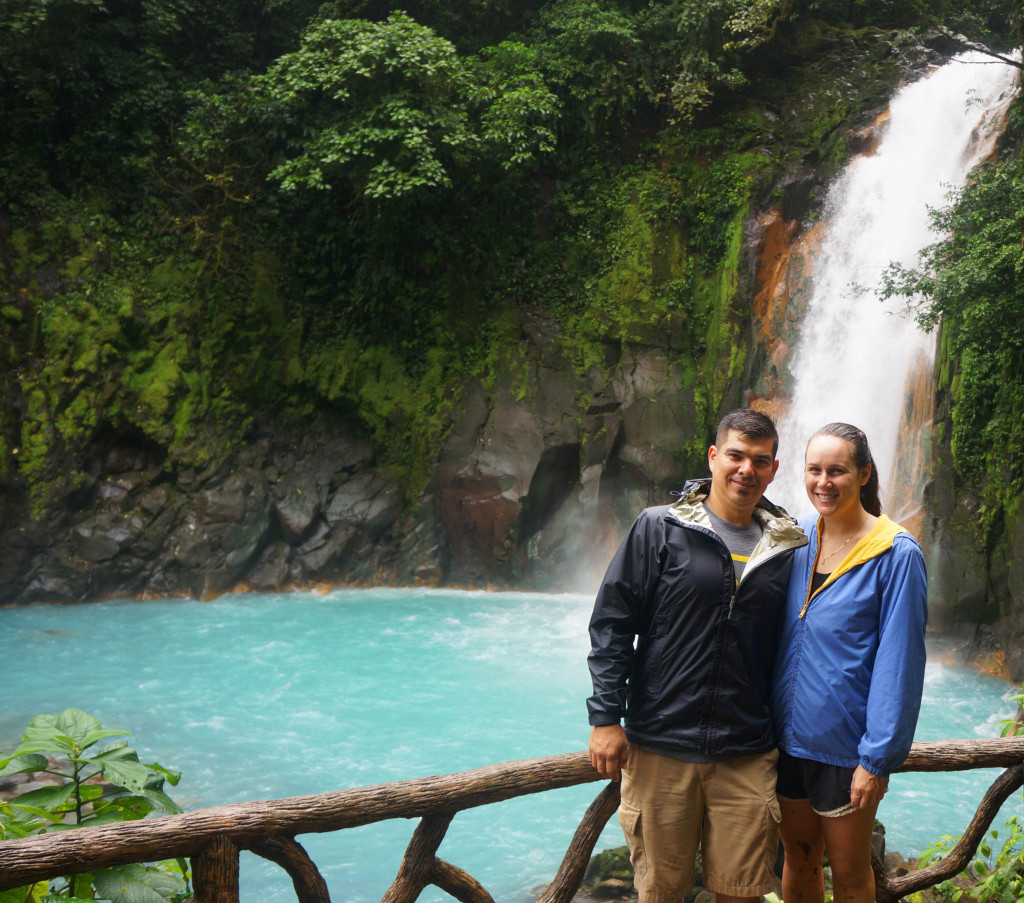 1. The Journey to Rio Celeste is a Trek 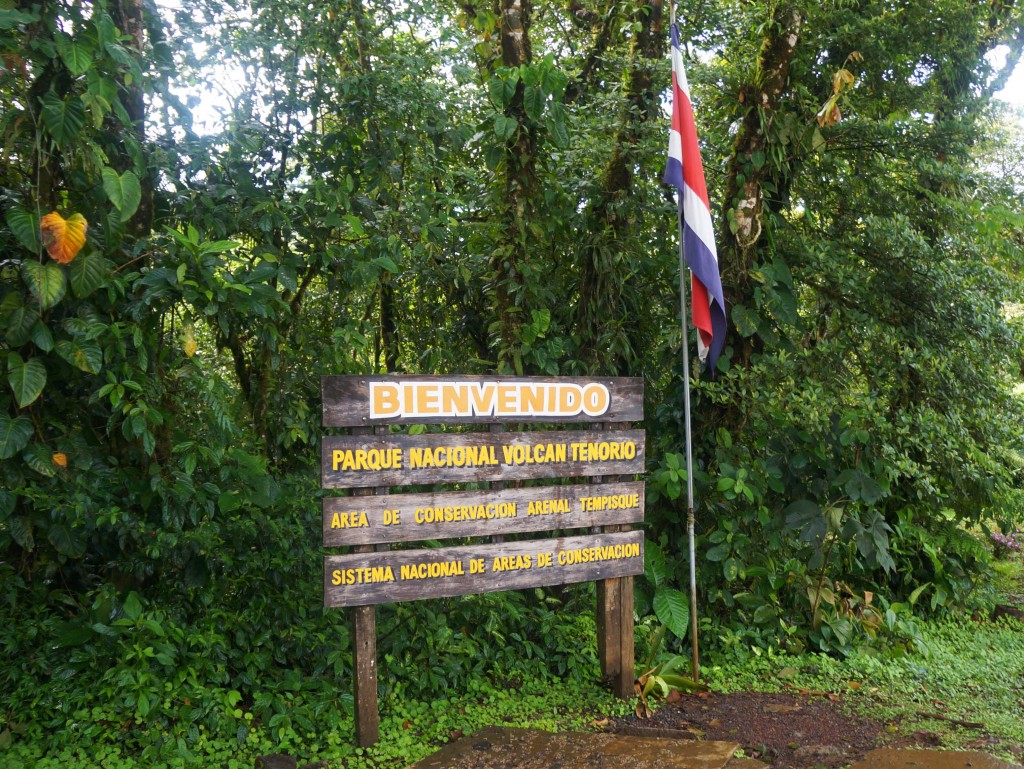 Rio Celeste, undoubtedly Costa Rica’s most enchanting river, is a 14-kilometer stretch of magical blue located in Tenorio Volcano National Park which is in the Northern lowlands. Unless you have a private plane, the journey to Rio Celeste is quite a trek no matter how close it may appear on a map (Don’t worry — it’s a long journey but well worth it in the end!)

Getting to Rio Celeste via public transportation would be a miserable, arduous journey requiring a full day of travel time, several bus changes and long stretches of walking or taking a taxi. To this end, you really need a car to visit Rio Celeste and one that is four-wheel drive.

A word of warning about renting a car in Costa Rica. DO NOT- I Repeat, do not – rent a car with Payless Car Rental. Diego and I made a reservation for a car at a very low rate online and called to confirm. However, when we showed up to their location on Paseo Colon they claimed to have no record of the reservation and blamed their error on me being a gringa and making the reservation from the United States even though I made the reservation from Costa Rica with a Tico watching me (and then called the office to confirm). Without a word of apology we were turned out onto the street. Diego and I desperately ran down the avenue, which is home to several car rental companies, in search of a last-minute rental. Four stops later, we were able to rent a car from Budget. Long story short, just book with Budget in the first place.

If you are traveling from San Jose the drive is about four hours, but can be up to six if you hit San Jose traffic at the wrong time and it takes you two hours to leave the city. If you are traveling from Liberia the drive is about two hours. Most of the roads you’ll take are paved but the last eight kilometers or so to the park entrance are unpaved and rocky. 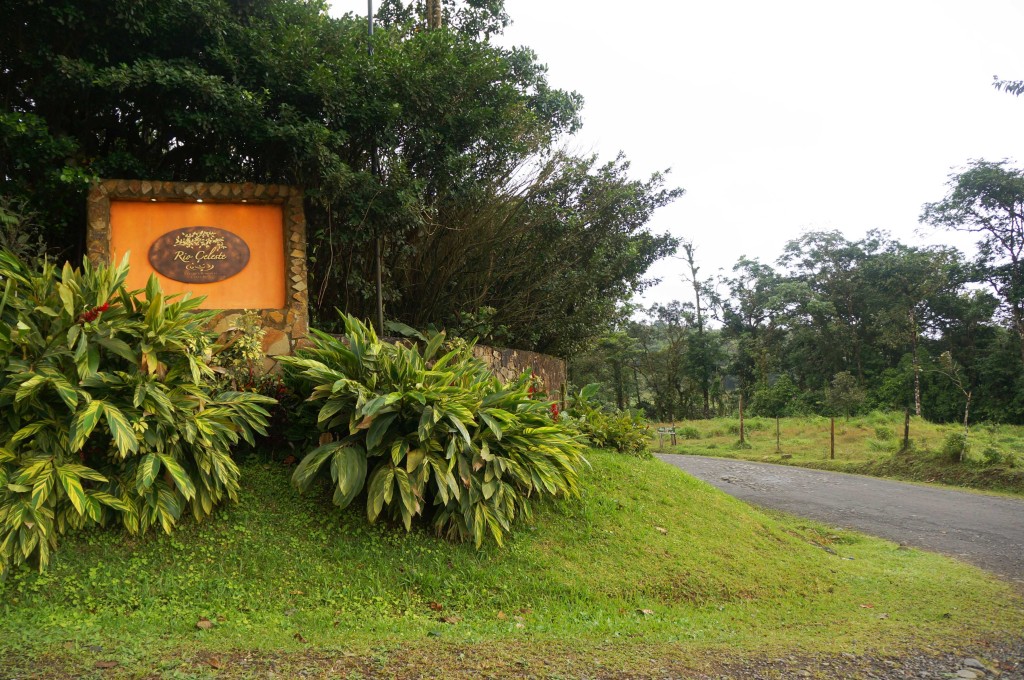 You could make Rio Celeste a day trip from Liberia or La Fortuna, but to maximize the experience I recommend staying nearby. There’s a few hotels that are not far from the park’s entrance. I stayed at Rio Celeste Hideaway Hotel and would definitely recommend this property to other travelers. It has a pool with a swim up bar and hot tubs that make for the perfect relaxing activity following a long drive or day of hiking.

2.The Hike to Rio Celeste is Long and Muddy 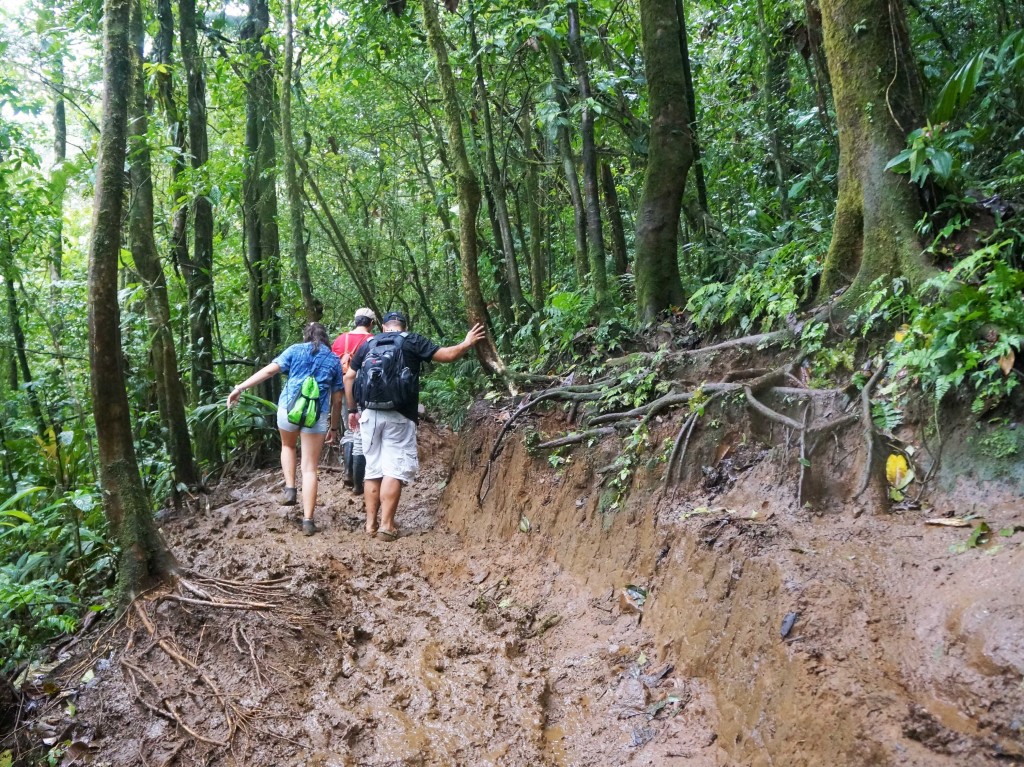 Once you reach the entrance of Tenorio Volcano National Park you aren’t at Rio Celeste quite yet- a long and muddy hike awaits you.

The first 20 minutes of the trail are not muddy and an easy walk on a flat surface. Once you pass the turn off for the waterfall the trail starts to descend and becomes muddy. And by muddy I mean you will spend 30 minutes lifting your feet up and out of thick mud.

For an additional fee you can rent boots at the park entrance office (something only gringos do). If you are wearing water proof hiking boots you’ll be fine and can just wash them off at the fountain at the end of the hike.

3. Hike to the Furthest Point First 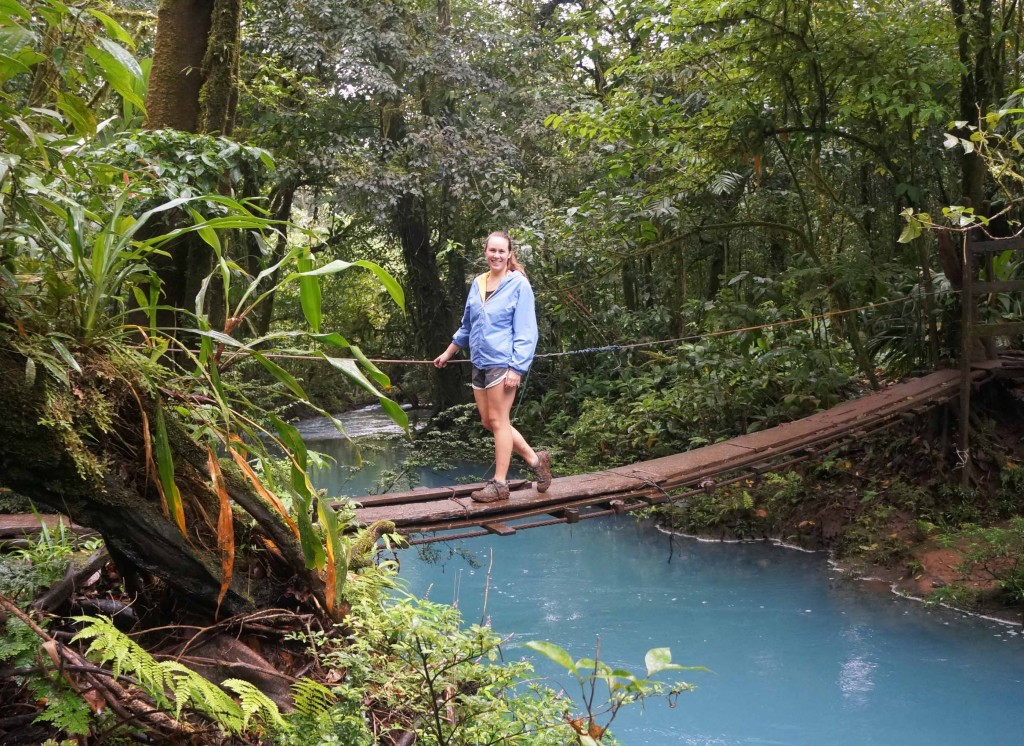 Diego and I received a great piece of advice from a local before the hike that we greatly appreciated first — save the waterfall for the end and hike to the furthest point first.

Roughly 45 minutes down the trail is a mirador, or panoramic vista. Don’t let this name fool you — the first place you can actually see the stunning blue waters of Rio Celeste is about 15-minutes further down the trail at Laguna Azul, which resembles the magical mermaid lagoon from Peter Pan. 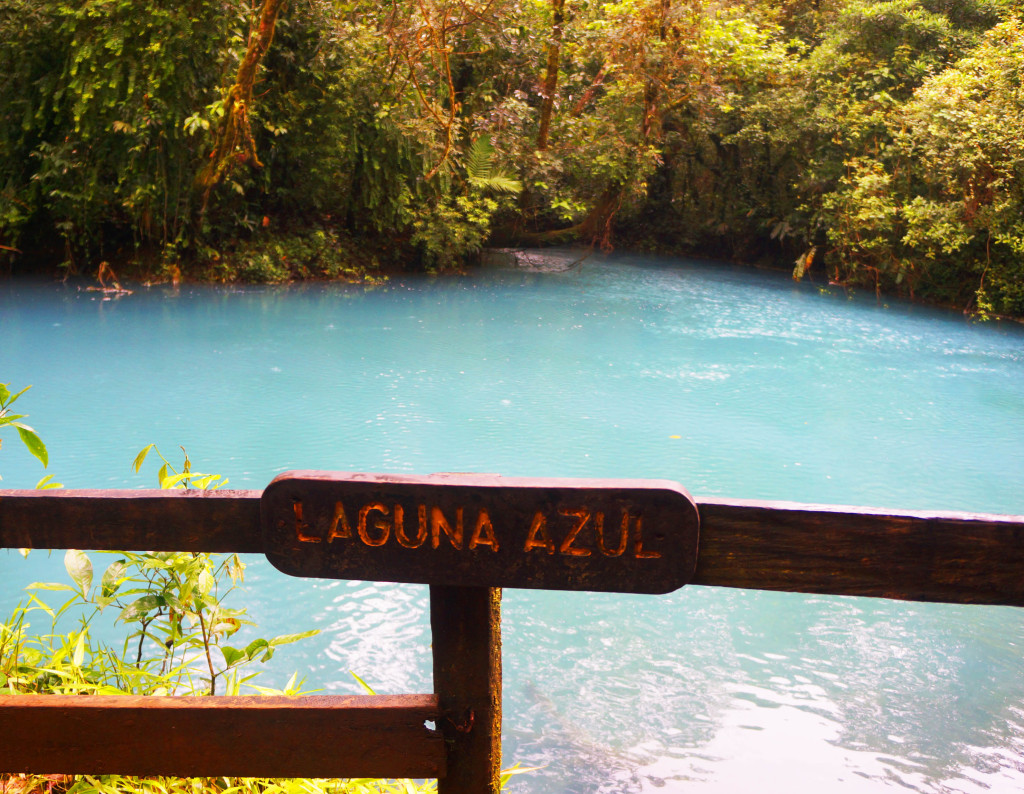 Continue down the trail, which parallels the river to the Borbollones, a portion of the river that bubbles do to sulfur. 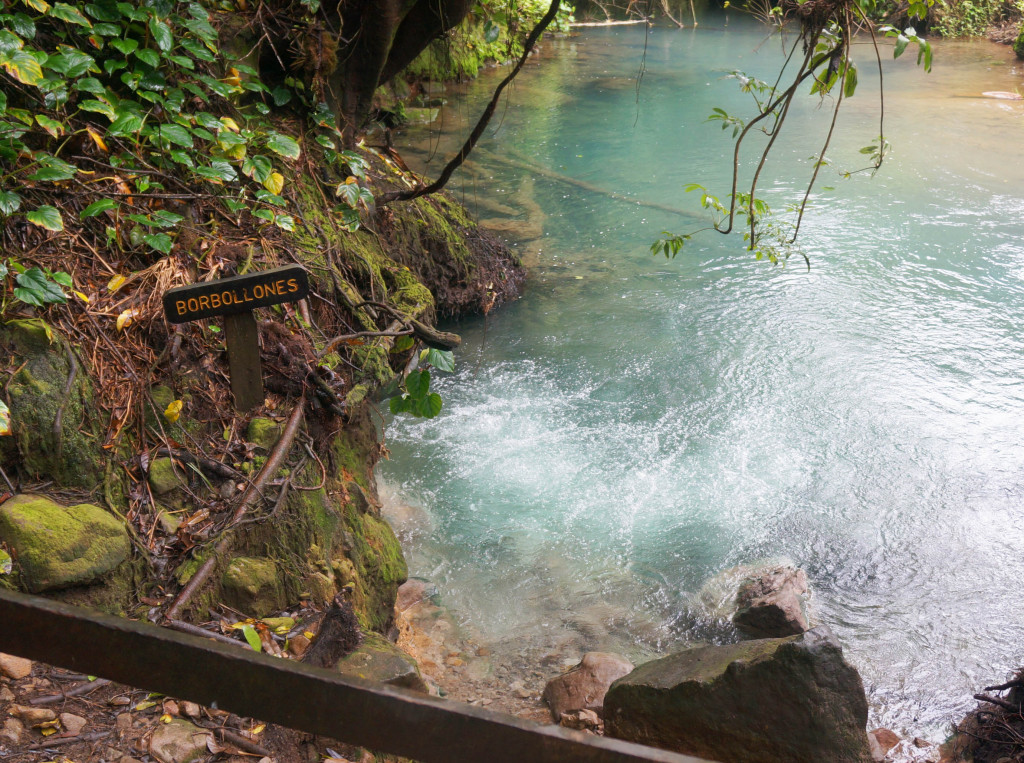 Continue down the trail and cross a rickety, wooden bridge that feels like it belongs in Indiana Jones. 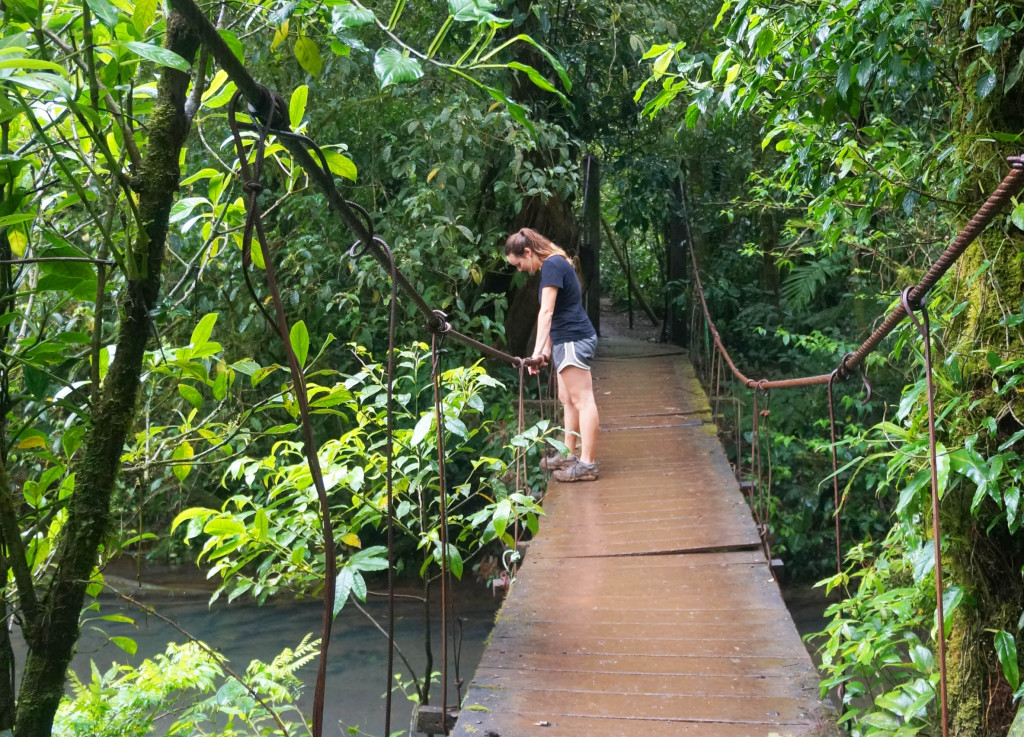 Further down is perhaps the most distinguishing portion of the trail and several low bridges lead across the jewel-tones of the river. You’ll definitely want to take photos here and spend some time soaking in the beauty around you. 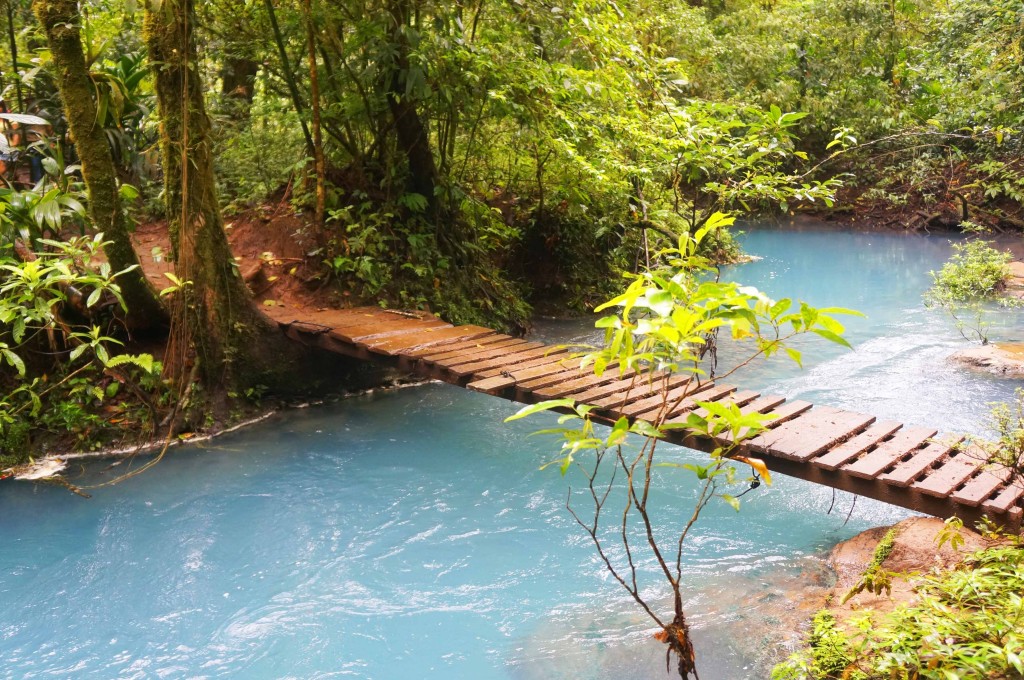 The trail continues to parallel the river before reaching los Teñideros. Rio Celeste is formed by two rivers that mix together. At this final stop along the trail you can see the two rivers merging to form the brilliant blue.

Then turn around and hike back to the waterfall the sight of which will re-energize you after such a long hike.

4. Why is Rio Celeste So Blue? 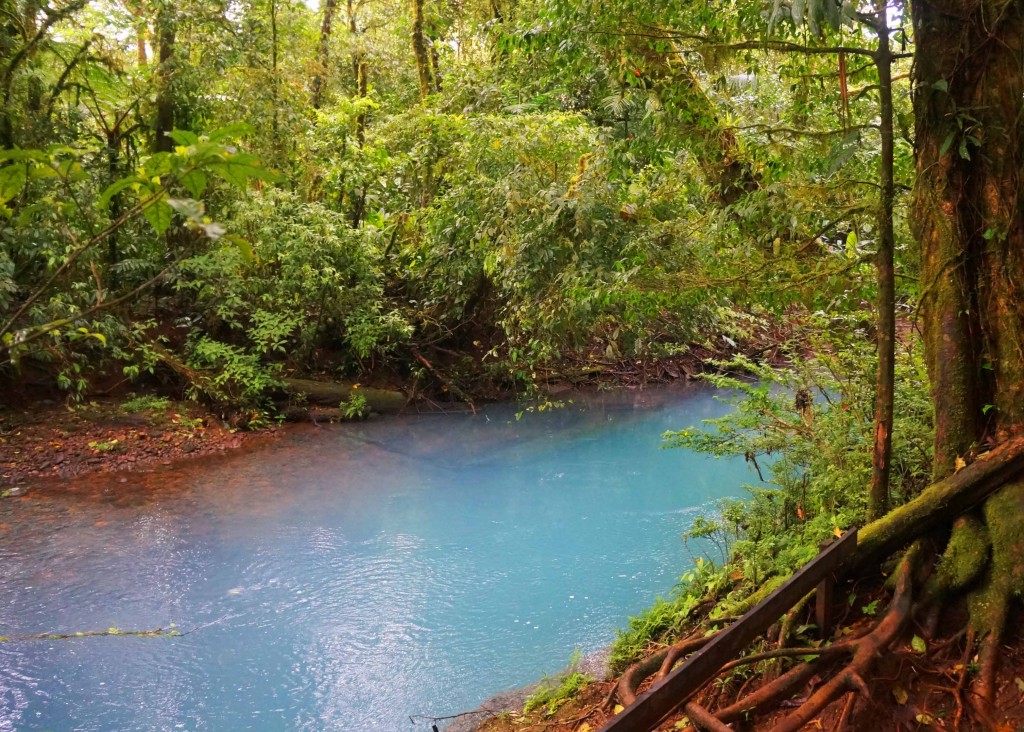 After hiking for so long next to this magical river, chances are you’ll find yourself pondering the question – why is Rio Celeste so blue?

Rio Celeste means light blue river. Legend has it that after God was done painting the sky he washed his brushes in the river and it now bears this color.

A team of researchers from the Universidad de Costa Rica and the Universidad Nacional came to a different conclusion. Rio Celeste is formed by the converging of two clear water rivers, Quebrada Agria (Sour Creek) and Rio Buena Vista (Good View River). The point at which these rivers mix is called el Teñidero.

The researchers found that the blue color is not a chemical phenomenon, but an optical one. The blue color is seen by the human eye in the waters of the river. Once the water is removed from the river bed it becomes clear. A type of mineral composed of aluminum, silicon and oxygen, while suspended in the water, reflects light from the sun, making the water look blue. The combination of the traces of this mineral in both rivers is what causes the color from el Teñidero onwards.

5.  A Word About Rio Celeste Waterfall 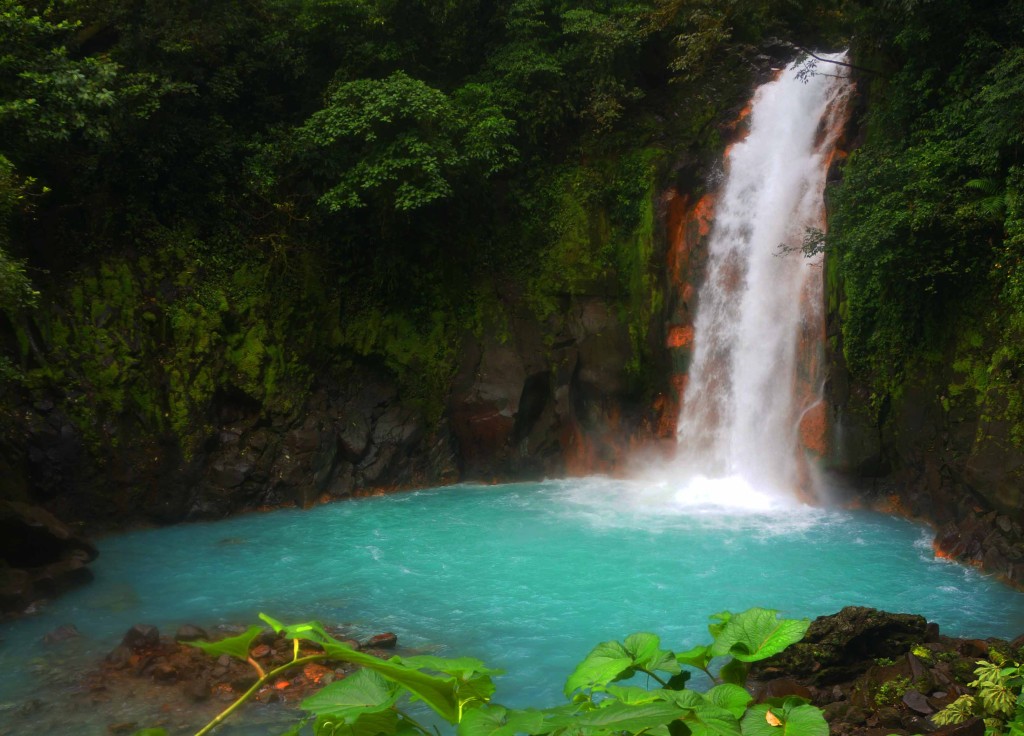 The most famous, if not the most stunning, feature in the national park is the Rio Celeste waterfall. The base of the waterfall is accessed by descending 250 steep steps. Again, I recommend saving this stop on the trail for last as it is a great reward for having almost completed the difficult hike. The waterfall is fenced off and no swimming is allowed in the national park, but the view here is so savory, hopefully you won’t mind!

6. Where to Swim in Rio Celeste 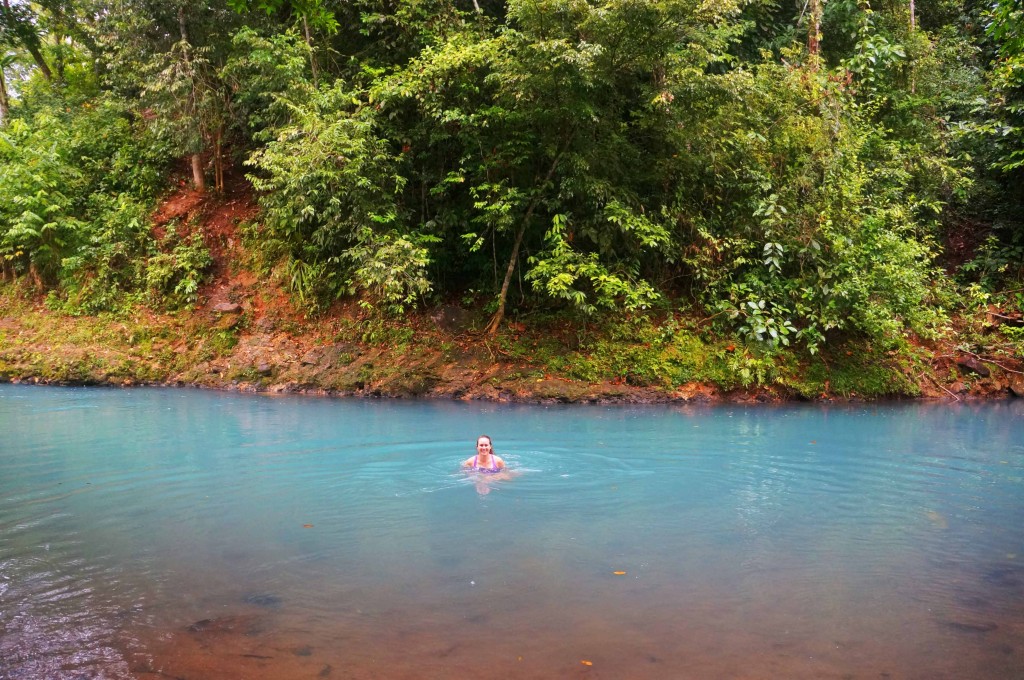 Swimming in Tenorio Volcano National Park is prohibited. However, the blue waters of Rio Celeste continue for 14-kilometers, so that means there are sections just as stunning located out of the park. If you drive along the river, you may notice some locals, or ticos, taking a dip in local swimming holes. Warning: the river does have high levels of Copper Sulfate which are known to irritate skin, but this doesn’t stop ticos (or me) from swimming.

We found a spot that was full of a lot of swimmers on the road from Katira heading toward Guatuso. It’s on your right hand side next to a restaurant and lodge. Parking is available.

Have you been to Rio Celeste? What advice do you wish you knew before visiting? Let me know in the comments below!

No worries whether you`re in Costa Rica or New York you can still be connected to your work 24*7 by accessing your online private workspace from anywhere on your preferred device(PC/Mac/android/iOS) using portable citrix xendesktop at an unbelievable citrix xendesktop pricing.Manage all your applications of MS Azure with managed azure services from Apps4Rent.com.